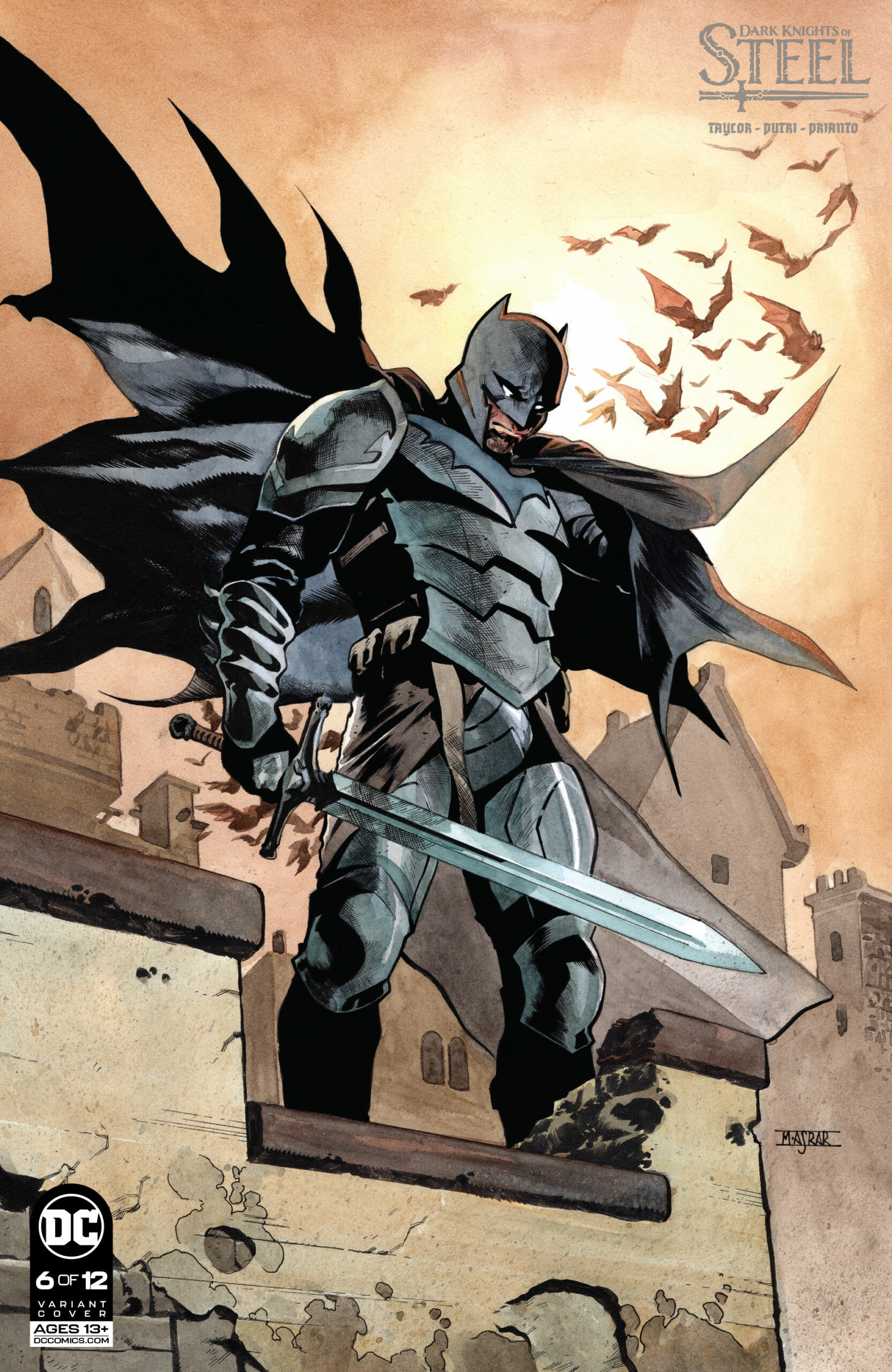 Dark Knights of Steel #6 is here. We’re halfway through this fantasy series, and something dangerous this way comes. The covers for this issue are mind-blowing and eye-catching… I’m absolutely in love. The version by Dan Mora where Kal and Bruce are split down the middle resonates with how the rest of this story arc may pan out. Both these brothers are in turmoil with each other, their family, friendships, kingdom, and allies. Batman and Superman have commonly represented day and night, both being the other side of the coin. In this universe, as they are princes and knights, the cover alludes to how they are still similar yet different in so many ways.

I’m still blown away by Dan Mora’s cover. He draws figures so gorgeous and elegantly. It’s such a prize to see his works, especially his rendition of these two heroes. The stained glass is stunning and invokes such feeling or intensity as well as a feeling that this is just the calm before the storm. As we’re now halfway through this arc, we’re coming to a place where we get to see the true villains of the piece.

Joshua Middleton’s variant cover is also a beautiful rendition of our princess Supergirl. Her flying into the frame with strength, in addition to the strong look in her eye, is perfection. I love the feminine feel of this art. Her stance is not objectified, but strong and fierce. She’s a force to be reckoned with. The way the art positions her, her perspective shows such power… I would collect this issue just for the variant covers! She looks like she’s about to own her enemies, and anyone who stands in her way should be terrified.

Mahmud Asrar’s cover, where we have the Dark Knight of Steel standing watch over his Kingdom, is a true collector’s piece. Having Batman in a powerful position, overseeing his realm, or observing his enemies, is perfection. He instills fear in any universe. I love the sun setting or rising in the background because the dawn always comes after the night. The cover shows power, but also hope. While Middleton’s variant shows the eye of the storm, Asrar’s gives us inspiration for the future.

Finally, the team-up of Yasmine Putri and Arif Prianto is yet again, wonderful. The lighting and the colors used in the background set the tone of the issue. We switch back and forth from blue to yellow, giving readers tension. The pacing of the art is done well, and captivating.

Dark Knights of Steel #6 is packed with action, a great story, and we learn more about alliances. This all really feels like a Game of Thrones universe mixed in with Dungeons and Dragons elements. I feel there’s quite a bit going on in this issue, but it is a whole universe dynamic that I honestly feel needs more than 12 chapters. However, the characters that are explored are fun and entertaining.

I’m looking forward to where this is going. Is Kal an imposter? Will Bruce recover from all his inner demons? Who are the real puppeteers in this arc?

I started collecting this series because of the creative team, but now I’m in love with the new characterizations of my favorite heroes and the amazing visuals. The lore is such a fun take, and I’m really enjoying the mixed dynamics. Those who you think are friends, are foes, and those who are foes are friends. Tom Taylor is an expert on twists, and I am hoping for so many more in the months to come.