“Fright at the Museum” 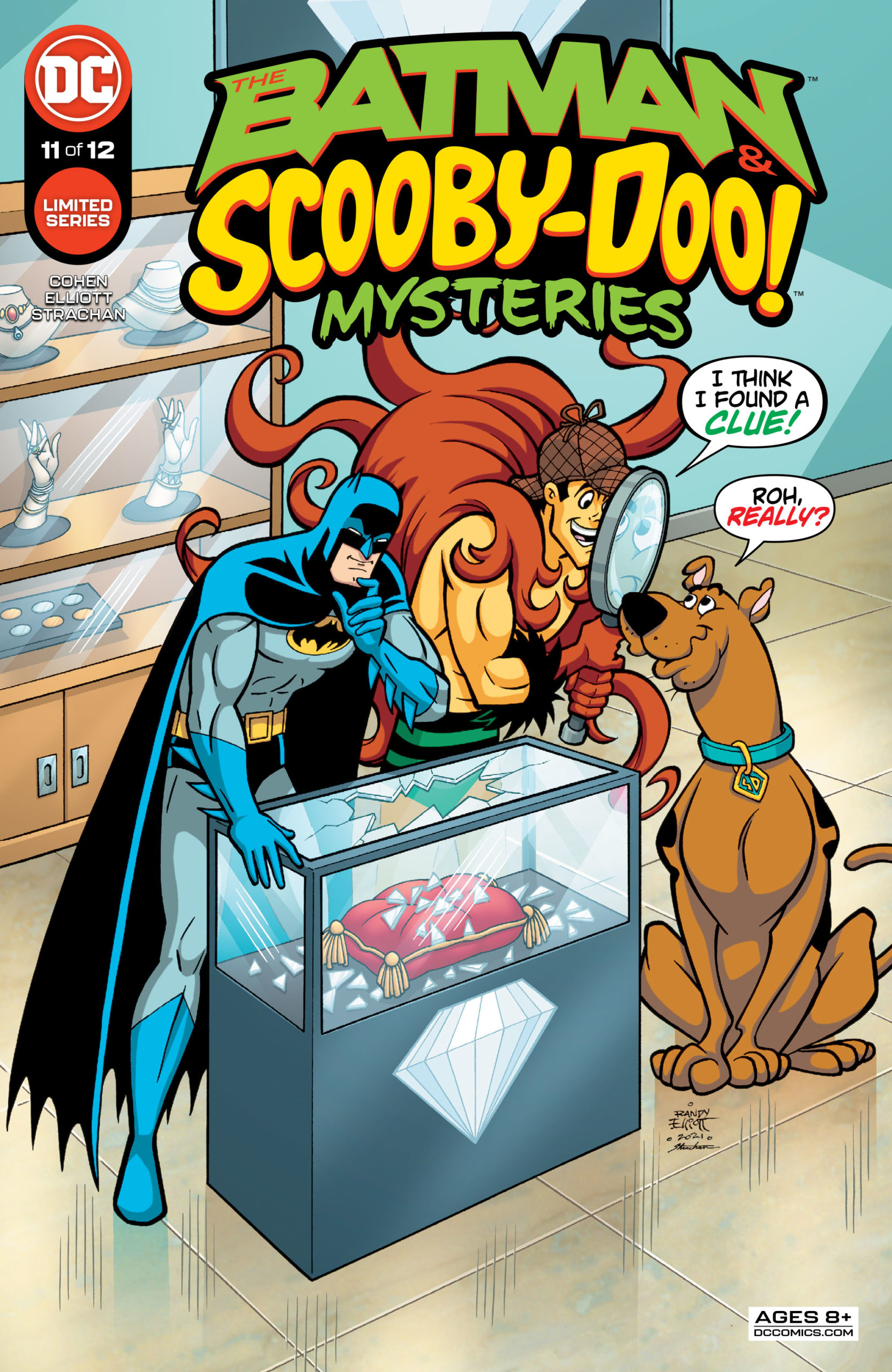 After a brief break, we’re back with The Batman & Scooby-Doo Mysteries #11! This month’s issue saw our favorite crime fighters returning to a location from the series’ first issue, the Gotham City Museum of Culture. After a robbery occurs when a new exhibit is set to open, Mystery Inc. and Batman team up once again to deduce who would rob a display on mysteries.

As per usual, we recommend catching up on previous issues of this comic before reading this week’s review.

This issue is a return to normalcy and more of what I have come to love and expect from The Batman & Scooby-Doo Mysteries. Even though most of the Mystery Gang was forced into the background for a large portion of this chapter, we still got to see snippets of Daphne’s intellect, Fred’s brashness, Scooby and Shaggy’s food antics, and the wonderful dynamism of Velma Dinkley and Batman ribbing on each other. If you can’t tell, the latter characters are my absolute favorites.

There’s something about getting to see Mystery Inc. work with the Caped Crusader that just brings joy to my heart. Not every issue in this series has been successful, but when we get to see the brilliant crime-solving done by these iconic heroes, it’s a good time. Batman and Velma are awesome together and seeing them challenge each other is everything I ever wanted as a junior mystery lover in my youth!

I will say that even the new character added to this issue’s dynamic. The Creeper is kind of fun, mostly because he’s transparently the reporter Jack Ryder. Mystery Inc. even questions if Batman knows the two are the same man, but I think it’s safe to assume that nearly everyone knows that not-so-secret identity. However, Ryder is a douche and I won’t mince my words on that!

I’m so grateful for this issue’s creative team! The Batman & Scooby-Doo Mysteries #11, as I mentioned before, feels like a return to form for the series we’ve known thus far. The art style makes sense, the colors are back on point, and the story’s not only sensible this week, but charming.

I think I’ve realized that I infinitely enjoy Ivan Cohen’s concepts more than Sholly Fisch’s. I want to root for someone with such a similar last name to mine, but I simply cannot at this point. In this series, I’ve given mid to high ratings and one or two low ones, and I know for sure that my lowest ratings have been for Sholly Fisch’s issues. Cohen’s ideas simply have a better flow and feel neatly wrapped up by the end of each book. To be fair, Cohen might have had easier baddies to work with, or based his concepts more on preexisting ideas for Batman stories. I just think that Cohen has things more together.

There’s only one issue left in this mini-series, so we’ll see who is at the writer’s helm for the finale. I want to look back at some point at the different cooperative efforts that brought this title to life and decide on my favorite creative team, even if it’s only for my own enjoyment. I can all but guarantee that my favorite will be an Ivan Cohen-led group.

The best parts of this issue undeniably lie in the storytelling elements, but not for the reasons you may think. I was so excited to get to see references to the history of mystery stories as a whole! I’ve been an Edgar Allan Poe fan since primary school, so seeing an orangutan appear as a villain in this issue was the chef’s kiss of references.

I hadn’t heard of some of the other early mystery/detective stories referenced in this issue, so I now have new reading material to pick up! I’ve been a fan of detective stories since I was a kid and my fascination with mysteries genuinely started with the various Scooby-Doo cartoons, so reviewing this series has been a real treat for me. Seeing Poe referenced in a Scooby-Doo story? Priceless.

Plus, who wouldn’t want to go to a museum exhibit based on the origin of the mystery genre?

The Batman & Scooby-Doo Mysteries #11 was a breath of fresh air. I got my clever characters back and we got to see brilliant fun from every member of the ensemble. The creative team was on top of things and the art (which I’ve extensively criticized in the past) was back to human shapes. I really enjoyed this issue and it’s rare for me to say that about this series.

There’s only one last adventure coming with the Bat and Mystery Gang combo. Now that it’s at its end, I’m a bit sad. The series has been delightful on the whole, and I’ve loved getting to see the most iconic crime solvers ever working together. Perhaps they’ll get a new animated feature together soon.