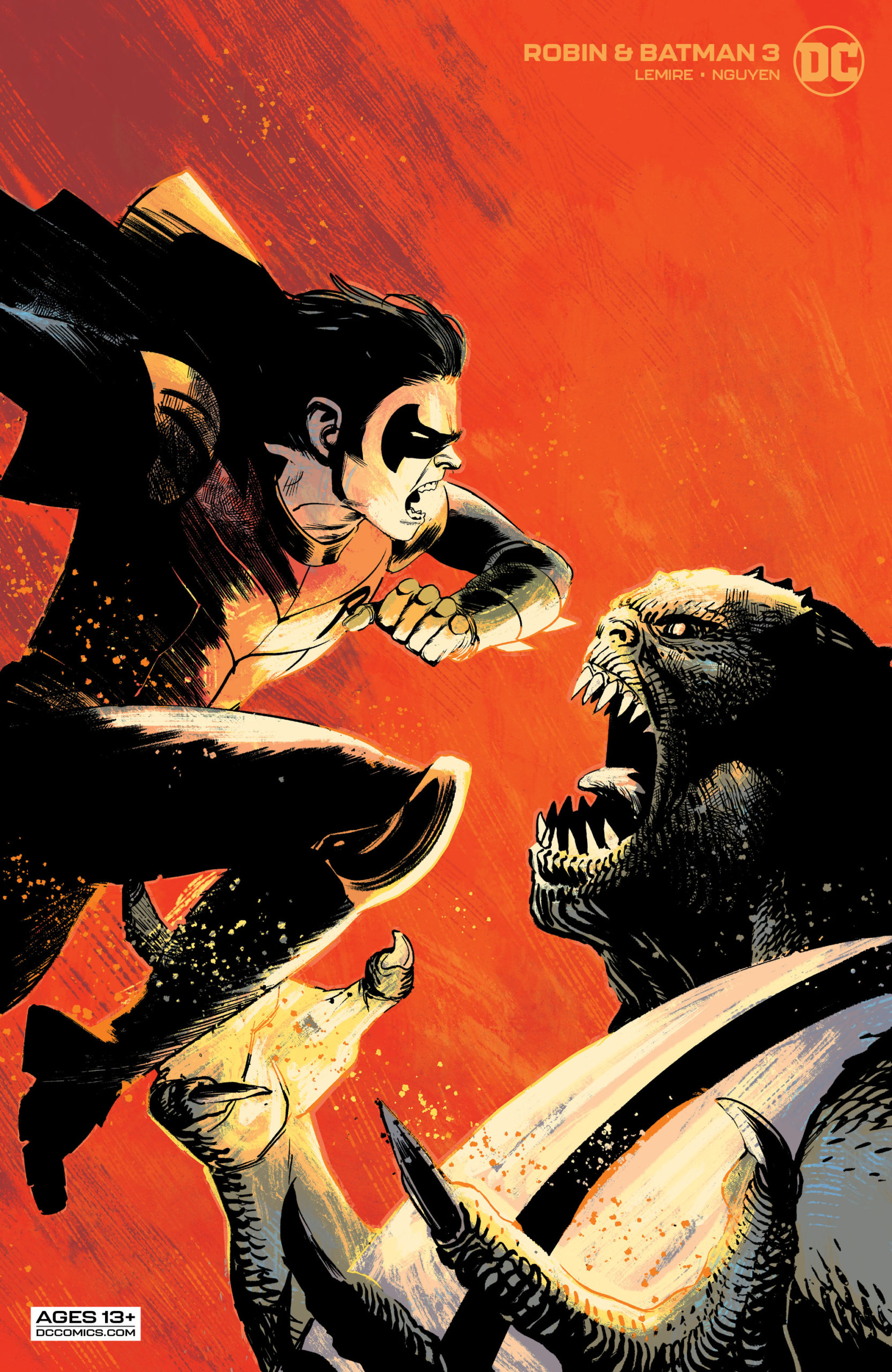 Robin & Batman #3 delivers an outstanding conclusion to one of the best-written, most gorgeous to look at, thought-provoking, and intriguing mini-series of the last few years.

I knew this story was going to be something special before I even finished the first issue. The second chapter upped the ante, and the finale more than stuck the landing. Linking Killer Croc, a character that we’ve always known came from a carnie background to the young Dick Grayson is an idea that’s stunning in its simplicity. Why had no one thought of this before? Yes, we saw Tim Drake make the connection between Robin and Dick Grayson, but Mr. Drake’s on the side of the angels. Croc is the complete opposite.

Paint A Picture Of The Past

Dustin Nguyen’s painted art is sublime. His Dick Grayson is clearly a young man but the way Nguyen furrows his brow displays his emotions, and delivers action set-pieces to die for elevates the whole book, by adding maturity and depth to the young hero. These characters not only speak and act like real people, but they also emote and move like them too.

I’ve said in previous reviews that looks back to the past, and re-tellings of comic book origins are frequently two-a-penny, so Robin & Batman needed to deliver the goods, and stand out from the crowd. This stellar creative team has managed to do both those things, in spades.

From the stunning main cover – one of the best “Death In The Family” homages ever – to that all-too-rare Robin saves Batman moment, this finale has the pulse-pounding, and the grey matter working overtime. While this chapter in Dick Grayson’s life has concluded, this story is far from over. I’ve already mentioned that Tim Drake guessed that Dick Grayson was Robin, but he then made the logic-jump connecting Batman to Bruce Wayne. What’s to stop Croc from coming to the same realization?

Does the villain now fear the Boy Wonder so much that he’s blinkered to anything else? Is his hatred focussed solely on the boy, and not the Batman? This needs to be addressed, and sequels to this series – particularly any helmed by the same creative team – would be very welcome indeed.

Robin & Batman #3 is that rare thing; a story that delivers a satisfying conclusion, yet still holds the promise for so much more. I would love to see Jeff Lemire, Dustin Nguyen, and Steve Wands follow Dick Grayson’s crime-fighting career, answer some of the questions this story raises, and watch Dick’s relationship with the Titans flourish, as he grows to eventually step out of the shadow of the bat.

If this happens, and the team goes on to tell stories that respect and honor the unsurpassed and legendary Nightwing origin given to us by my heroes, George Perez and Marv Wolfman, then count me in. I love comics, and series like this one are the reason why.