Rejected Batman: The Animated Series Episode Would Have Been Too Dark

A rejected episode of Batman: The Animated Series could have “brought the wrath of God on the series”.

Writer David Wise provided an overview of his rejected story for the beloved animated series on Batman: The Animated Podcast with Justin Michael. The episode, which would have been titled The Darkest Knight, features a drugged Batman who is pushed to his limits by Hitler Youths and threatens the rogues’ gallery with a suicide vest. The plot is centered on Robin’s confidence in his teacher/father figure, with the Boy Wonder rushing to prevent Batman from going against his code.

Batman gets gassed by a paramilitary gang akin to Hitler Youths after being lured to a meeting spot under the pretense of the mayor being kidnapped. The mastermind is a wealthy right-wing radical who believes Batman isn’t safeguarding Gotham sufficiently. The chemical causes Batman to turn on his allies and toss a mugger from a rooftop, brainwashing him into waging a new, bloody war on crime. The episode ends with Batman summoning his rogues’ gallery to Gotham’s stadium, where he intends to kill everyone by detonating a TNT vest.

Wise says he “would never do this story in this day and age,” but he still likes the idea of seeing what happens when The Dark Knight loses control and his allies fear he’ll end up in Arkham along with his rogues. The suicide vest feels like it would be a bit much, especially for Batman: The Animated Series (a program ultimately marketed for kids), but including a far-right militia hits awfully close to today’s political atmosphere. 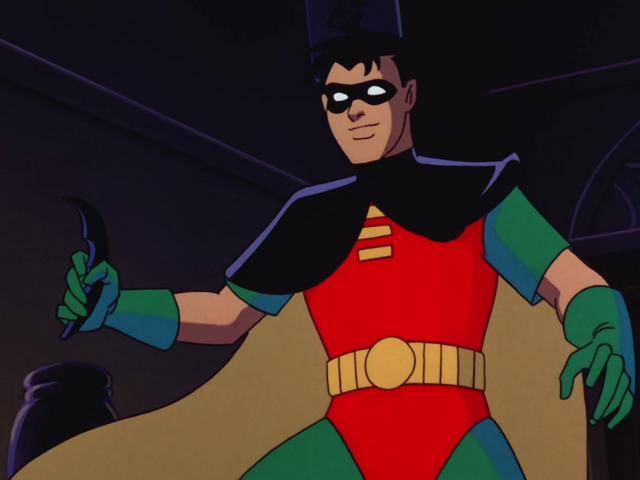 Robin, according to Wise, keeps the Batman: The Animated Series episode from being too depressing—he never loses faith in his mentor. He goes to Arkham Asylum and manipulates the Joker into disclosing knowledge about the gas to produce an antidote. Wise describes The Joker’s entrance as being pushed in on a gurney and wearing a straitjacket like Hannibal Lecter. He teases Robin about how Batman ruined his life, cleverly exposing the Dark Knight’s flaws. In a dramatic fight, Robin eventually manipulates the Joker into assisting and ultimately saves Batman, demonstrating the importance of the Bat-Family in keeping their leader in check.

While most of the live-action Batman interpretations rarely touch on an extremely violent Batman, Michael Keaton, Christian Bale, and Ben Affleck’s interpretations all lack a partner to help ground the vigilante’s actions. This fits into the plot of Batman v Superman: Dawn of Justice, as it implies that Batman begins killing following Robin’s death at the hands of The Joker.

While The Darkest Knight was a bit intense for Batman: The Animated Series, it was willing to confront Batman’s actions in a way the live-action versions tend to avoid. As often is the case in the comics, Robin (and the entire Bat-Family) lend the much-needed heart to balance Batman’s coldness.

Get In The Halloween Spirit with These DC Comics