The new series will set the DC universe in a fantasy world, similar to Game of Thrones or Lord of the Rings. Various characters will be re-imagined with a medieval, fantasy bent to them. Fan favorites including Batman, Superman, Wonder Woman, and Harley Quinn will be completely re-imagined. 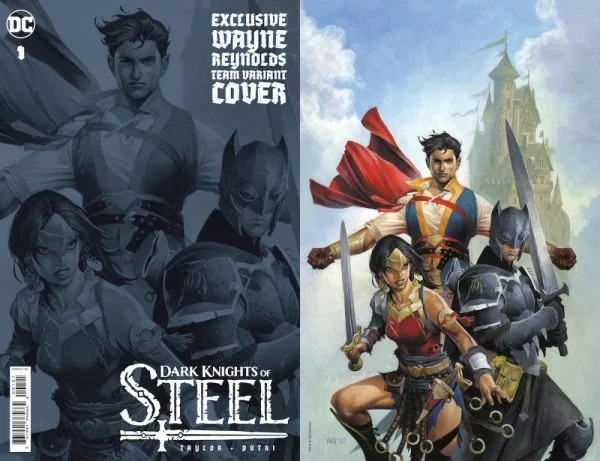 Interestingly, Taylor has also revealed that Black Lightning will  figure heavily into the series too.

I’ve spent the last two years creating a new epic fantasy universe for DC Comics, and Dark Knights of Steel is an absolute dream come true. Despite being the writer of the DC horror series, DCeased, I’m actually a huge a fantasy fan.

Combining two of my favorite things, DC superheroes and high fantasy, is my absolute happy place. I grew up reading Lord of the Rings alongside Superman. Terry Pratchett alongside Garth Ennis. Robin Hobb and Mark Waid. Dragonlance and Justice League. Now I get to bring all this together with the incredible Yasmine Putri, in the biggest story I could imagine.

A tale of war and love, of despair and hope, of betrayal and improbable alliances forged in battle.

Now, I get to bring all this together with the incredible Yasmine Putri, in the biggest story I could imagine. A tale of war and love, of despair and hope, of betrayal and improbable alliances forged in battle. #DCDKOS pic.twitter.com/LOMUMSRNXc

The Tone of ‘Dark Knights of Steel’

Taylor promises that fans of GoT or the role-playing game Dungeons and Dragons will feel right at home with the series.

“[The series] is for the fans of shows like Game of Thrones and Critical Role. This is for the kids who took dice to school, who chose their own adventure, and dreamed of flying in a cape.”

Yasmine Putri joins Taylor as the artist for the series.  Joshua Middleton and Wayne Reynolds also will provide art for the variant covers. The series will run for 12 issues.