“I Am NOT Starfire” 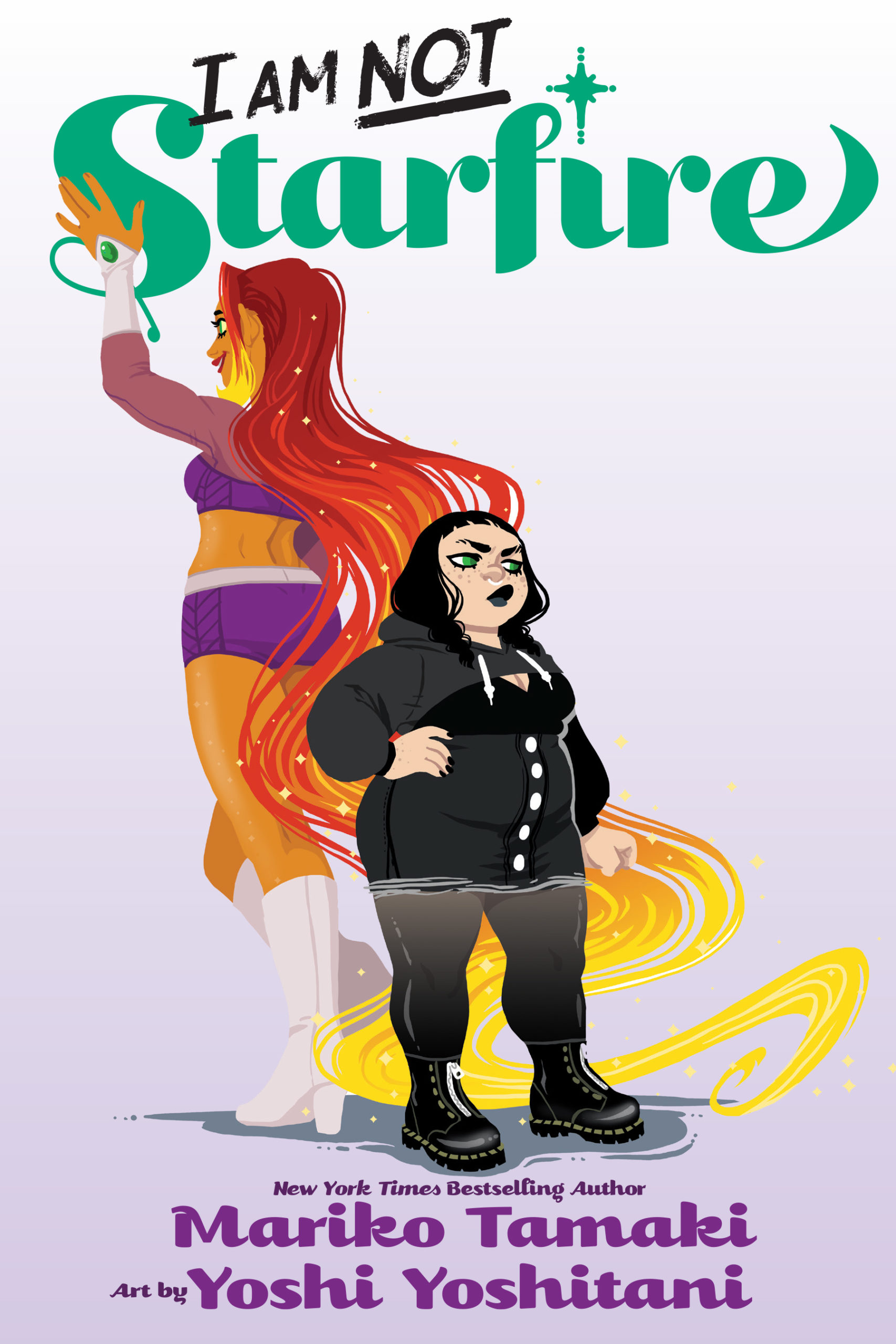 For a while now I have been anticipating the release of I Am NOT Starfire. Hearing the premise alone had me super excited. Starfire has a kid, who is nothing like her, quite the opposite in fact. As if that was interesting enough, I saw the cover and was immediately hooked. The epic juxtaposition of Mandy in her dark clothes at the front of the image, contrasting with a bright orange and purple flying superhero in the background was just too much for me to handle!

I can immediately tell you, no teenage girl ever wants to become their mother. We in fact do almost everything we can to push our parents away in our teenage years, just reaching for a bit of freedom that we can never quite grasp. Now imagine that you’re the daughter of an awesome, famous, glamourous, stunning, alien superhero who saves the universe on a daily basis. Yeah… no thanks. Mandy has definitely had it tough having to grow up with all that pressure, to measure up to what the world thinks she should be; the ideal daughter for the ideal superhero.

I actually can’t blame her for rebelling. It’s a teenagers right of passage, to turn away from and reject everything their parents are, so if you’re a daughter of a superhero who’s always in the spotlight… what better way than to become a social pariah. Not knowing who to trust as a friend, Mandy had to create her own world where the people around her have to not care about her mom.

Tamaki is the hero we deserve

I adore the way Mariko Tamaki has written the struggle between mother and daughter in I Am NOT Starfire. It must be hard enough for Starfire herself, being from another planet and still not truly understanding humans, but trying to raise a child who has grown up as a human, the disconnect can be hard. Not to mention that no one, not even the teenagers themselves know what is really going on in their heads! 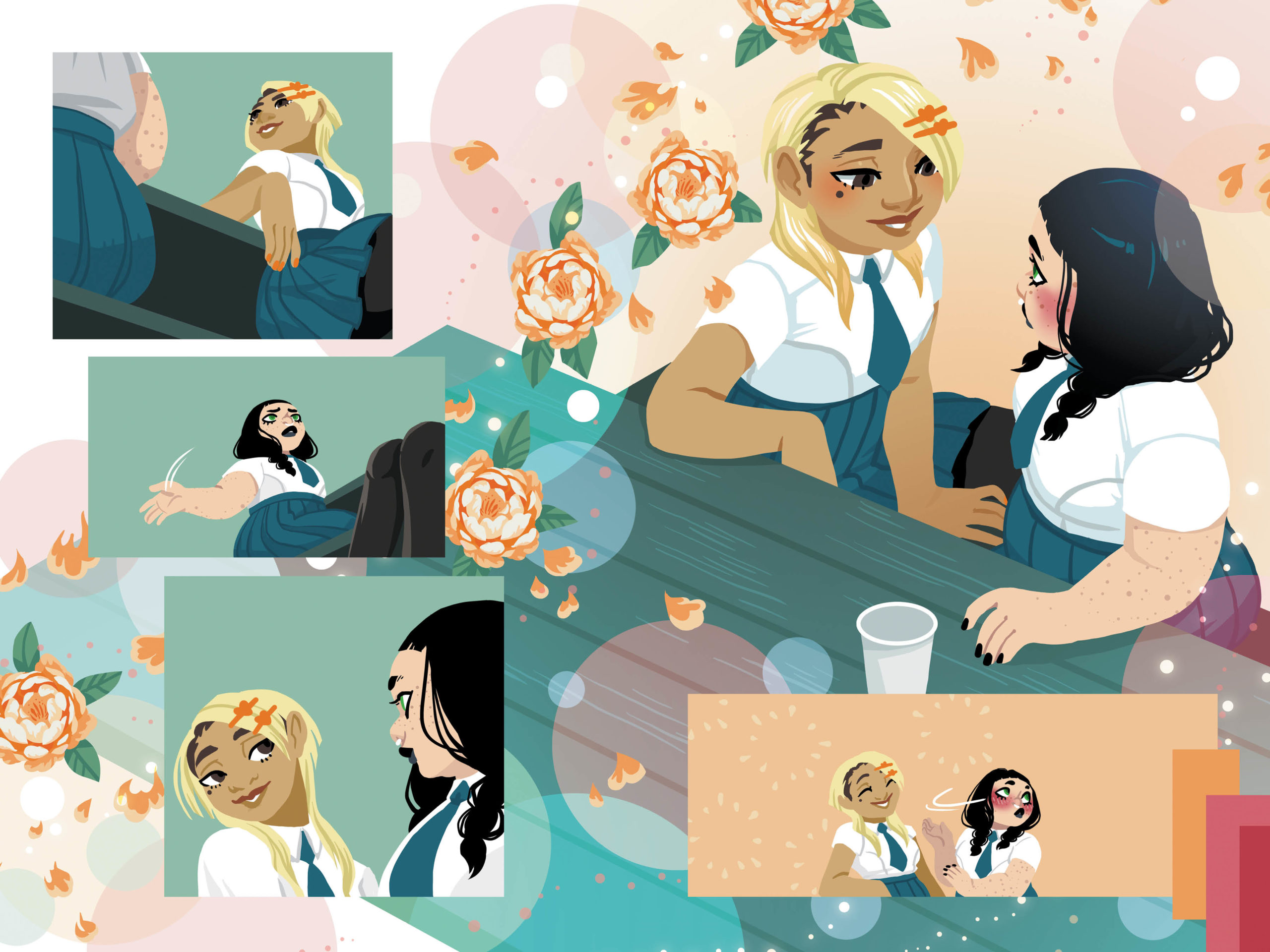 Tamaki has done an amazing job writing the heartache of a young girl wanting to find her place in the world. Just trying to figure out who she really is, and how she can finally step out of the shadow of her mother. Then there’s the speculation of who Mandy’s father is… I have my own guesses, but I think it was left open for a reason. This wasn’t supposed to be a story about Starfire and some guy (which is what it would have become, you would have to explain backstory about them before you got to the actual crux of the story.) This is supposed to be a story about mother and daughter relationships, embracing where you come from while finding your own identity. This story’s also about learning to be unafraid of failing, if it was even failing in the first place.

A Star is on Fire

Yoshi Yoshitani is simply, on fire. I am Not Starfire is a visually stunning piece of work. The colors the artist uses compliment each other, and she’s not afraid to make them vibrant. Mandy likes to look dark and moody, though everything around her is filled with color and light. I have some especially favourite panels, one is a moment with Mandy and someone special. The background alone was great, not even considering the cuteness and awesomeness of what was happening in the foreground. Sometimes the simplest little things add so much to the story.

I always find that going back for a second read through, once you know the plot line, means you can focus on the details. The smaller things in panels that might you might not have caught in the first read. A lot of these add extra atmosphere to a scene like, when we spend time in Starfire and Mandy’s home, I know it’s lived in and I know it’s loved, all because Yoshitani spent time and put in the effort. Amazing work. 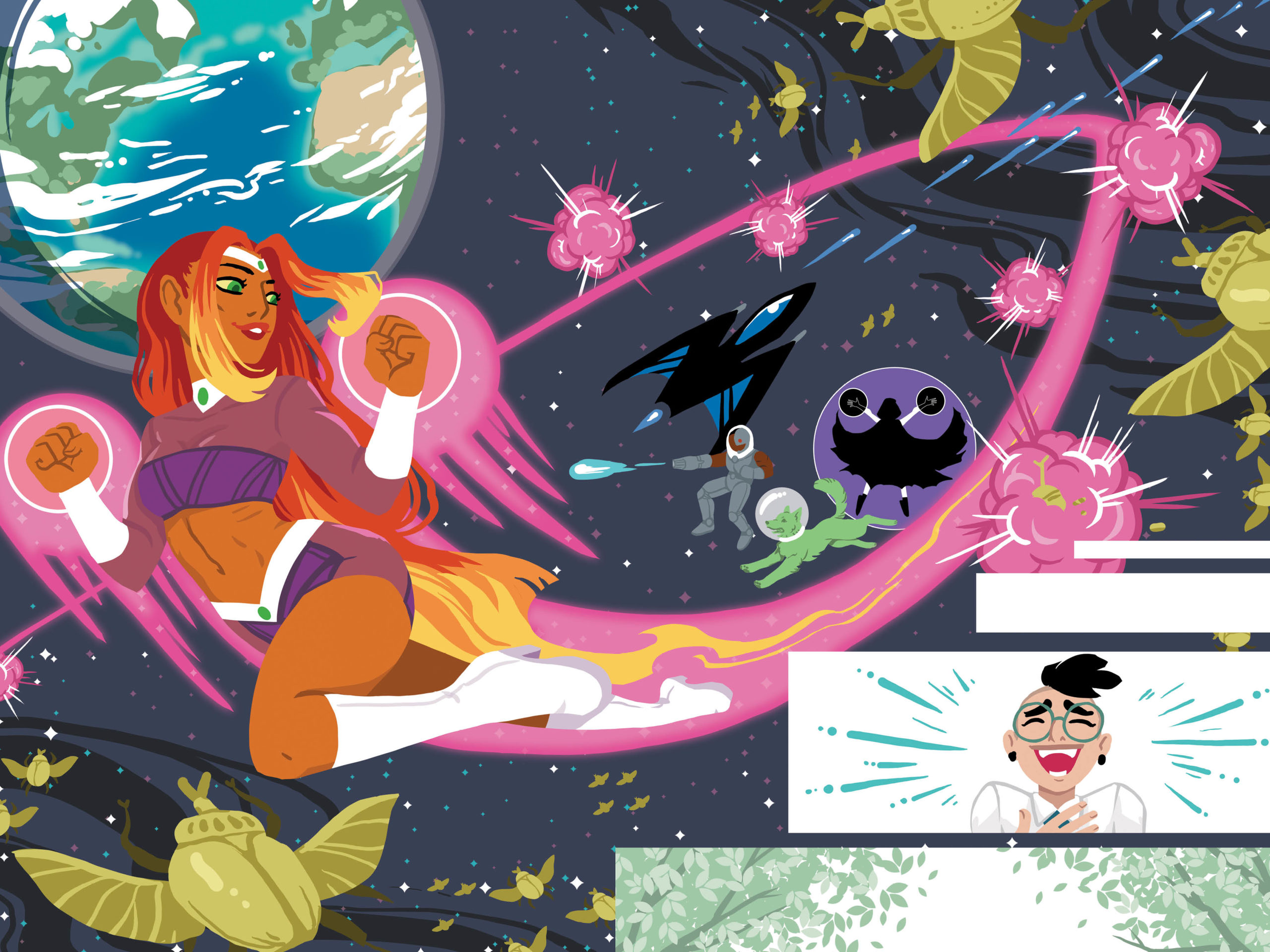 I loved everything about this story. Honestly I could go on for even longer. We haven’t even touched on the epicness that is Mandy’s best friend Lincoln. Oh, wow… now that is a hero to me. He sticks through it with a friend and is there for her, whether it’s in front of a couple of classmates or the whole school. That’s a friend we should all have and try to be.

The characters in this book are all amazing, and I adored seeing grown up Titans and what they were getting up to.

I am Not Starfire is a particularly spectacular Young Adult graphic novel. The team of Mariko Tamaki and Yoshi Yoshitani was an inspired choice, and a truly superheroic collaboration.