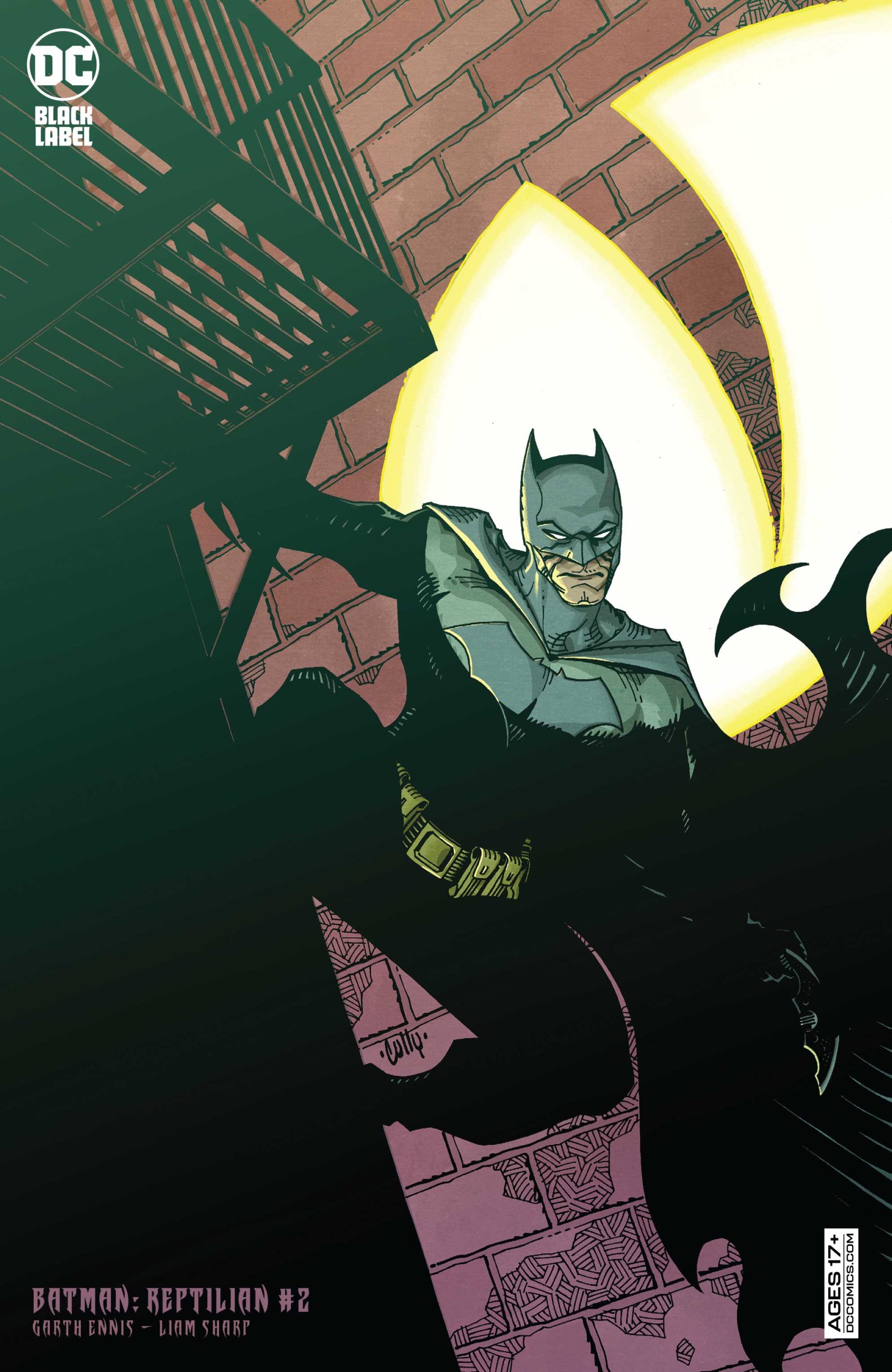 The beautiful, terrifying artwork of Liam Sharp is back and with a lot more red, in Batman: Reptilian #2. The front cover for this issue, with Batman looking through a cave of hanging bodies, shows you exactly how dark and twisted this chapter gets when the World’s Greatest Detective embarks on his search for Gotham’s villains.

A Little Splash Of Color

Unsurprisingly, Liam Sharp’s art is as stunning and beautiful as it was in issue #1, although a little more color has been added for this chapter…. starting off with lots of bold red, as Batman’s investigation develops. It’s done in a way that shouldn’t make sense or look good, but it does.

We get more than a glimpse of the Batcave too, and it’s as dark and gloomy as you might imagine most caves should look, but there’s a certain page that I absolutely love. Alfred’s and Bruce’s silhouettes are highlighted by computer screens and the striking touches of color make it look textured, and crazy, and perfect. There are many pages like this in the issue, but this Batcave one stands out the most for me.

Stop Me If You’ve Heard This One…

Penguin, I’m going to take some of your blood. Recite the alphabet backwards if you don’t consent.

I’m not sure about you, but even if I wasn’t slowly dying or on the verge of passing out, I wouldn’t be able to say the alphabet backwards. Batman’s dry humor and witty comebacks are more obvious in this issue than the last, especially with Alfred being in this one more. Everybody knows just how sassy the butler is when it comes to Wayne and his “hobbies”. Our favorite Caped Crusader making jokes is a rare thing, so it’s nice to see him cracking a few this chapter, even if some of them do almost scare the life out of his informant, Konstantin Volkov.

Getting to see the Batmobile in action is always a great thing too. 300 volts seemed a bit excessive, but it got people off the paint-job and Batsy’s never been one to  do things the easy way. He was nice enough to let an injured crook ride with him though… in the trunk.

We’re seeing more of Liam Sharp’s vision of Gotham in Batman: Reptilian #2, and it’s beautifully grotesque. Getting to see so many villains in such a short time, even if they aren’t at their best, is a rare treat too. I’m looking forward to seeing who else is brought into the chaos. The writing was just as great as in the first issue, just with a lot more sassiness added in. That’s always great.

Although we haven’t gotten to see Batman in action yet (his monster car doesn’t count), seeing the Dark Knight investigate this crazy case, with only the tiniest of clues, will never be boring. It also feels like we’re edging a little closer to finding out what’s frightening Gotham’s finest enough that even the Prince of Mayhem is in hiding.

It looks like we’ll be seeing a lot more green in the next issue, so please come back next month for more!