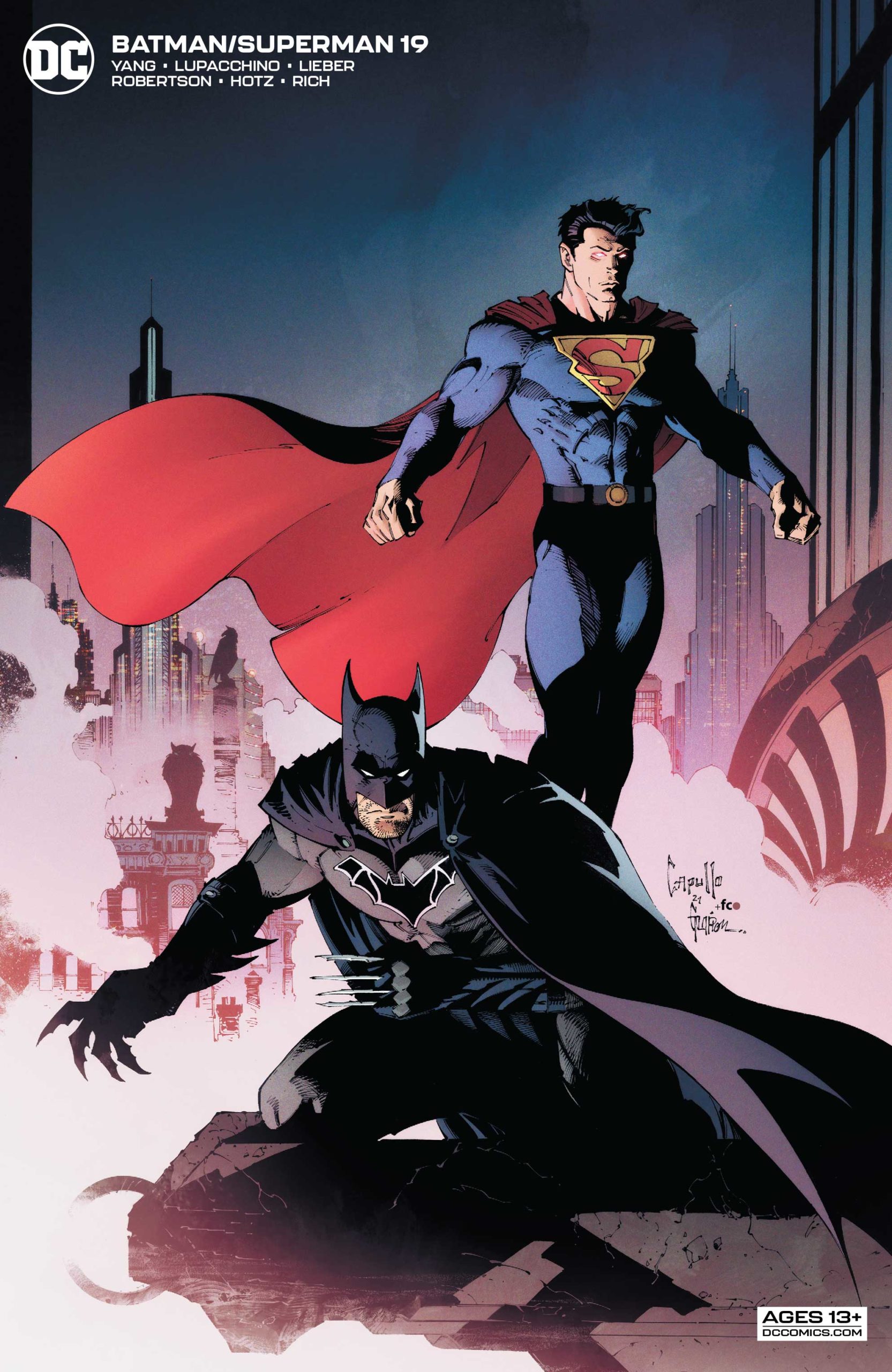 Things get metaphysical in this week’s Batman/Superman #19, as the cinematic World’s Finest explores what’s beyond the shadows of their reality.

Things aren’t looking too great for Batman and Superman. Their new nemesis, Auteru.10, has used a phantom zone crystal to capture both heroes. Therefore, it’s up to the cinematic versions of Batman, Superman, and Robin to find a way to free their Earth-0 allies. This leads them on a tour through various “Earths” within Auteur.10’s Archive of Worlds.

A Bat, a Bird, and an Alien All Walk into a Greek Cave…

After reading comics for roughly a decade and a half, I’ve realized that many of the writers who pen these stories are nerds. While this revelation shouldn’t shock anyone, I should probably clarify what I mean. Yes – these writers are fans of the characters and therefore nerds; however, what’s become apparent is that these writers tend to be well educated/read. Gene Luen Yang is no exception, as is made apparent by Batman’s philosophizing in Batman/Superman #19.

It turns out that this cinematic Batman may have taken a philosophy course or two, for upon seeing Auteru.10 and the Archive of Worlds, he immediately compares his situation to Plato’s Allegory of the Cave (think Inception except for the Ancient Greeks). I found this reference to be a bit ham-handed, as if the first thing a person would do when faced with the equivalent of a cosmic being is stop and provide his companions with an intro level-lecture on Platonic Thought. That being said… I’m gonna let it slide. Yang’s script is wonderfully high-concept, as he establishes narrative in the Platonic tradition – a tradition that works well with the mythopoetic nature of superhero comics.

Batman/Superman #19 is the first issue of this arc that has not featured the sublime art of Ivan Reis, and I would be lying to you if I said it wasn’t noticeable. Reis is one of the great A-Listers at DC, and it’s blatantly obvious that he didn’t work on this issue. That being said – the art for the issue isn’t terrible. Rather, it lacks a certain je ne sais quoi that Reis brings to the table. Nevertheless, the art team did their very best to keep with some of Reis’s aesthetic choices from previous issues. For example, they used the film trim for some of the paneling, and I must note that there are five different artists credited for drawing and inking this issue. Despite this large team, the book visually feels cohesive, which is quite an impressive feat.

Batman/Superman #19 is another fantastic issue in what has been an incredibly fun arc. Yang manages to tow a fine line between high concept and accessibility, which is no small task. While the art team changed for this issue, there’s enough continuity in aesthetics that the shift isn’t overly jarring. Overall, this is another solid installment in a run that verges on being a masterpiece.

Final Verdict: Why are you still reading this review? Go read the issue!