Zack Snyder’s Justice League will be released on HBO Max in just a few short hours, but with its run time, you may need the day off.

With Zack Snyder’s Justice League taking up just under 17% of your day (25% if you sleep a “normal” 8 hours), it could be difficult to watch when the film releases at midnight PDT on HBO Max. Don’t worry though, the streaming service has enlisted S.T.A.R. Labs’ own Dr. Ryan Choi to provide a note to excuse you for the day.

To whom It May Concern: Please excuse from work/school/general activities no matter how big or small on Thursday, March 18, 2021, as he/she/they has a sizeable obligation to watch Zack Snyder’s Justice League several times. In case you are unaware, this is a massive unprecedented event. All the best, Dr. Ryan Choi. 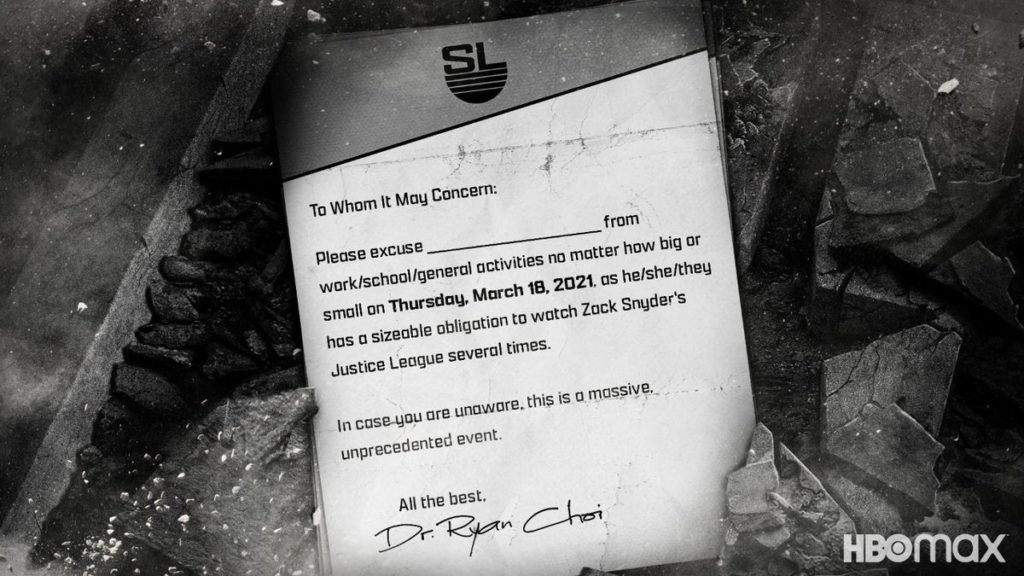 It’s a hilarious meta-reference to Zack Snyder’s Justice League runtime. Between normal sleep and watching the film, half your day is already accounted for. For those that have an issue with the runtime, please remember where this film is debuting – HBO Max. A straight run-through of Zack Snyder’s Justice League isn’t necessary! You can pause, stop, and resume on your own schedule. Heck, make your own four-part mini-series event if you’d like!

In addition to this fun doctor’s note, Snyder has confirmed an official Zack Snyder’s Justice League watch party. It’ll be at 4 pm PDT on Thursday, March 18th, and be similar to past events for his other DC films.

Both the Man of Steel and Batman v Superman watch party events were massive hits, but I think this next one will be the biggest yet.

Join me on Thursday at 4pm PDT for the official ZSJL Watch Party Screening. I’ll be dropping in for a bit to answer some of your questions live before the screening. RSVP at https://t.co/PvDMghEQU2

While cut from the theatrical version of Justice League, Choi will be played by actor Ryan Zheng. Let us know in the comments below if you plan on taking the day off to watch Zack Snyder’s Justice League!

Will The Batcave Be In ‘Fortnite’ Chapter 2, Season 6?