With his cut of Justice League quickly approaching release, Zack Snyder has a lot of people to thank. There had been varying rumors about cameos from other members of the DCU in the film. However, a heartfelt thank you post from Snyder himself confirms his gratitude at Jared Leto’s version of the Joker returning to the fray.

The Joker in the DCEU

Although he’s one of the most popular characters in DC comics, the Joker has not been super present in many of the films featuring Batman, from the last few years. Jared Leto was the latest actor to portray the Joker, against ben Affleck’s Batman in Suicide Squad. This was after the untimely death of the previous Joker, Heath Ledger. Leto’s journey to portray the Joker onscreen however has had several twists and turns. Of course, we’ve since had Joaquin Phoenix’s Oscar winning portrayal, but this was a different Joker, in a world without Batman.

When Leto finally got to debut as the Joker in Suicide Squad, his role was diminished to the point of being a tertiary character, and he didn’t appear at all in Birds of Prey, despite being referenced throughout the film as a part of Harley Quinn’s struggles.

Recently, Snyder shared a thank you, addressed to Leto about his new cut of Justice League on Vero. 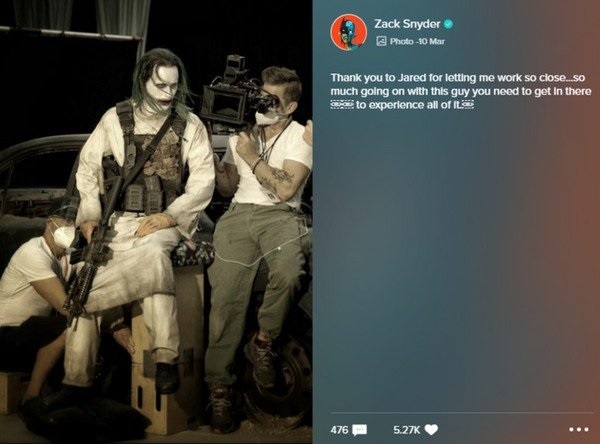 “Thank you to Jared for letting me work so close…so much going on with this guy you need to get in there to experience all of it.”

In his post, Snyder thanked Leto for allowing him to “work so close”. It’s clear from Snyder’s comment that he’s excited to see Leto’s performance in the full Snyder cut.

The Joker might not have much actual screen time in Zack Snyder’s Justice League. Nevertheless, it will be exciting to finally get to watch Leto’s second turn as Mr. J. We also have our fingers crossed that there might be a Joker/Batman faceoff, but we’ll just have to wait and see.

Speculation about Leto’s role in the film has suggested that the Joker will only appear in a Knightmare sequence. It will be interesting to see his new look in this alternate reality. While Leto’s limited return might be disappointing for some, at least audiences know for sure that the Joker is back.

Who knows whether we’ll ever see this version again, though. The Snyder cut of Justice League isn’t to be considered canon in the DCEU, so there’s no telling which characters and plots will return in later DCU films. All the same, the possibility of a DC multiverse is in the mix, which could mean countless films in the future.

If Zack Snyder is at the helm again though, anything, even Jared Leto as the Joker, is possible.