One of the more iconic scenes from Suicide Squad gave us Jared Leto’s Joker laughing on the floor, while surrounded by knives, guns, and… baby clothes? Director David Ayer reveals the meaning behind the baby onesies. 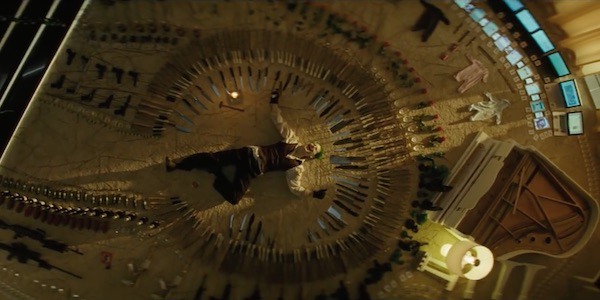 Joker is surrounded by weapons, roses, and baby clothes.

Fans have speculated that the baby clothes implied that the Joker may have murdered babies off-screen. Fortunately, the answer is less gruesome than that. On Twitter, Ayer revealed that they’re more of a reference to Harley Quinn, more specifically, Harley’s desire to have a family with the Joker.

No it’s more innocent. Harley wanted a normal family with Joker hence the baby in her vision. I figured she would have endlessly pestered Mr. J about having a kid. So he had Mr. Frost buy some onesies. The circle represents how he sees Harley. https://t.co/EGQCMiWFbo

According to Ayer, apparently the Joker’s henchmen bought some baby clothes at the behest of Harley. Ayer even states that the Joker being in the middle of the circle is a metaphor for how he views Harley’s relationship. In this case, the Joker believes himself at the center of Harley’s world, including wanting to start a family.

This revelation is consistent with how Harley is portrayed in Suicide Squad. Harley genuinely loves the Joker and can see a future together with him. This is further demonstrated in Harley’s dream vision later in the movie. When her and the rest of the Task Force X team is under a spell from the Enchantress, Harley envisions living in a traditional family household with the Joker.

It’s a shame that David Ayer could not have explored that more in the movie, as it would’ve been more interesting if those themes were a little more clear in the final cut. Still, it is some intriguing subtext between characters, huh?