“A League Of Their Own” – Part Four 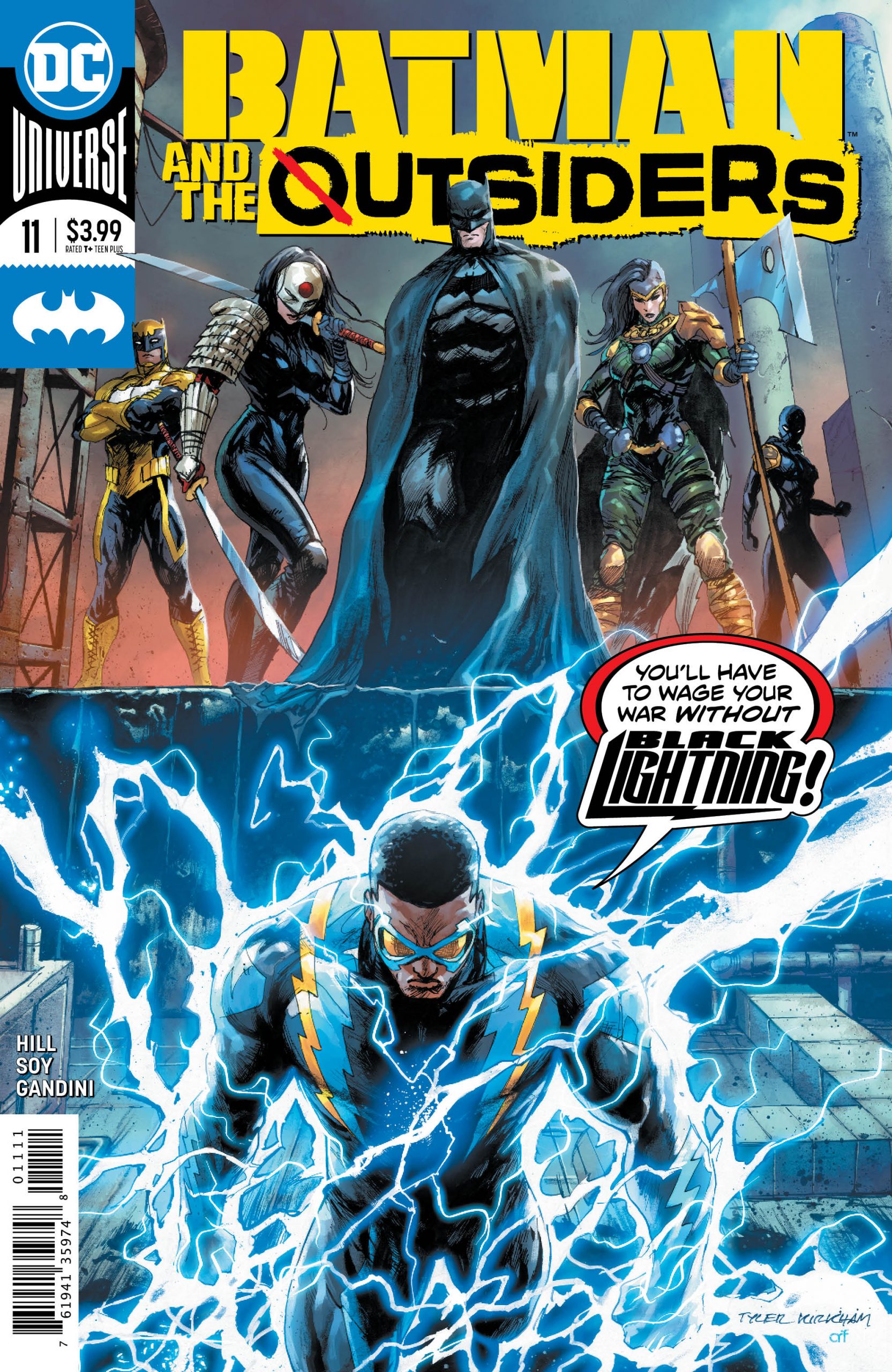 Batman And The Outsiders #11 is one of the most comic-booky (is that even a word?) comics ever… in the best way possible. The gorgeous covers will lure readers in, but the great dialogue, fantastic characters, stunning art and kick-ass action will keep them there.

Yes, folks… this issue has it all.

Last month we left Black Lightning and Shiva outnumbered and face to face against the traitorous Kaliber and Ra’s Al Ghul’s minions, Karma and Ishmael. All seemed lost, but in a cliffhanger to end all cliffhangers Signal, Orphan and Katana joined the fray, leaving us all agog and exasperated for four weeks.

Was the wait worth it? In the immortal words of Steven “Stone Cold Steve Austin” Williams… Oh, Hell Yeah! 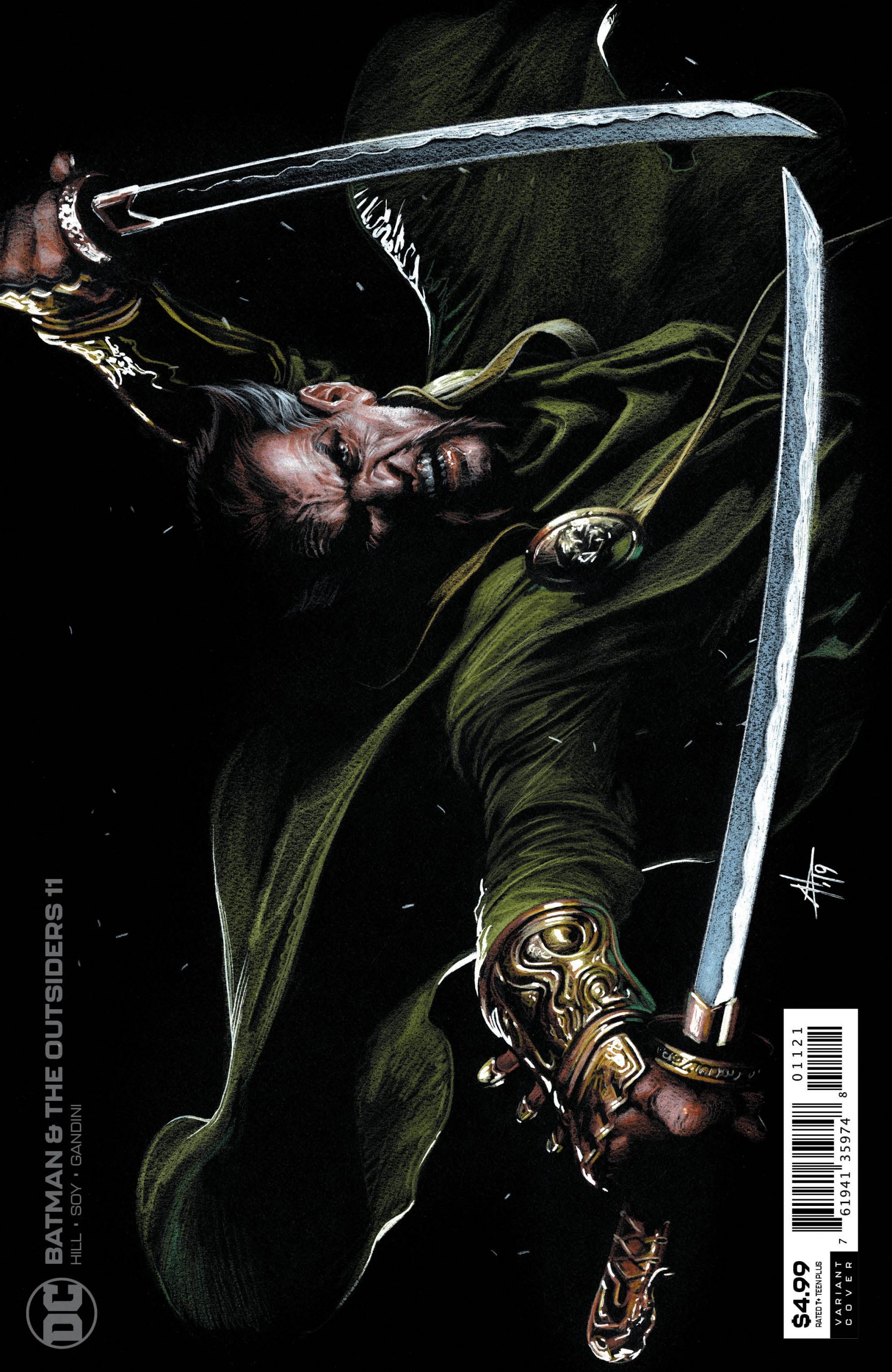 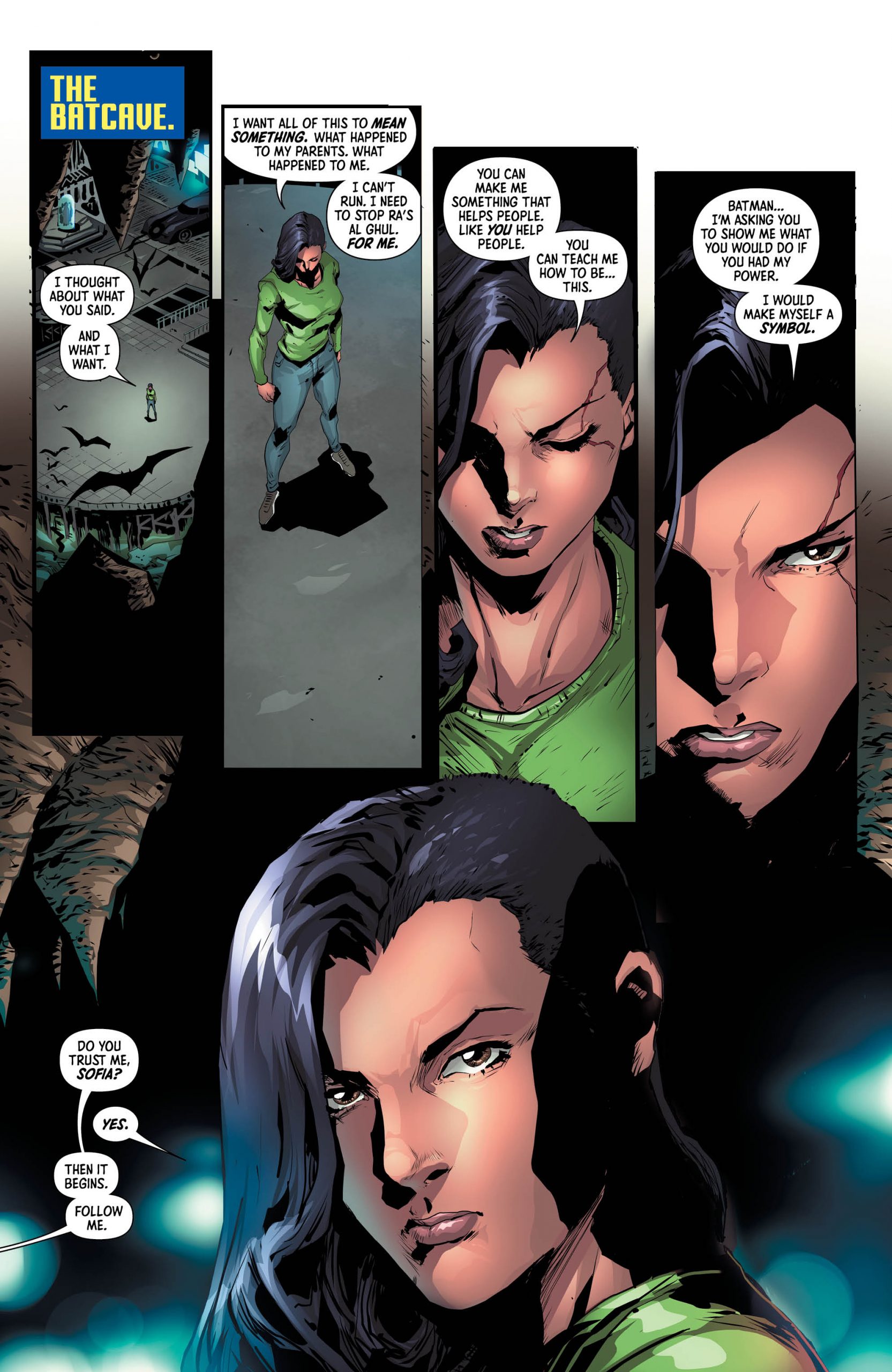 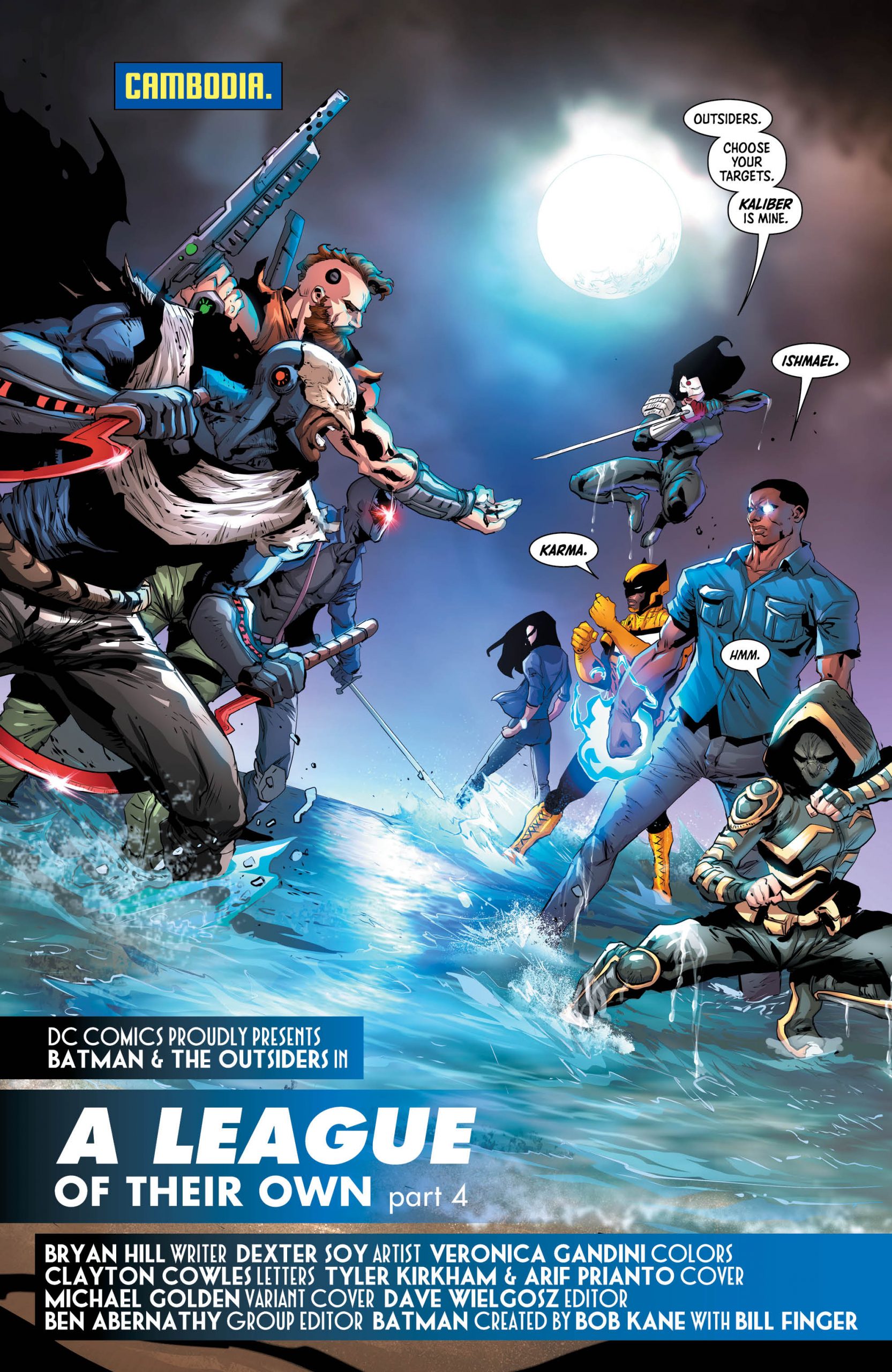 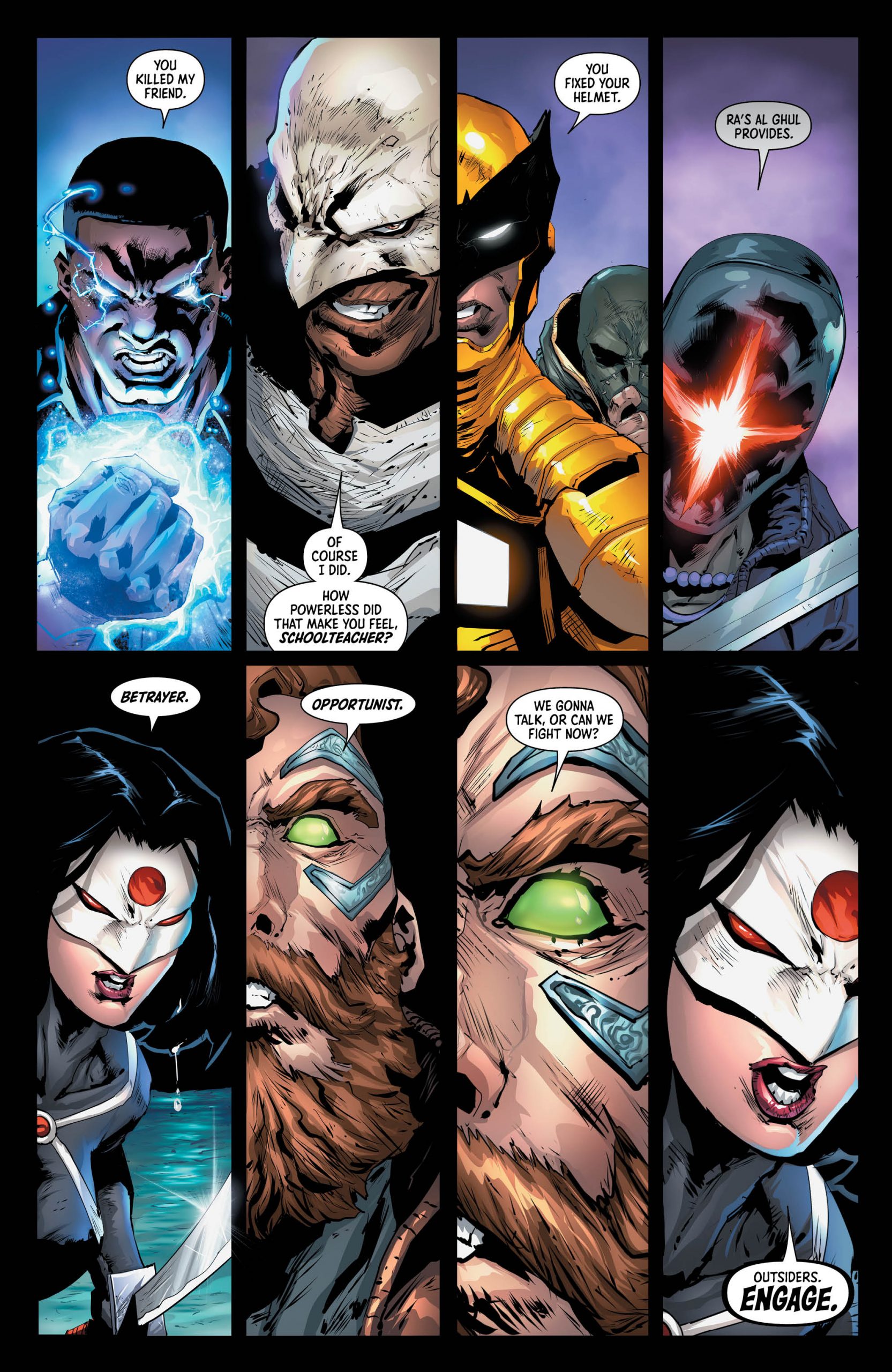 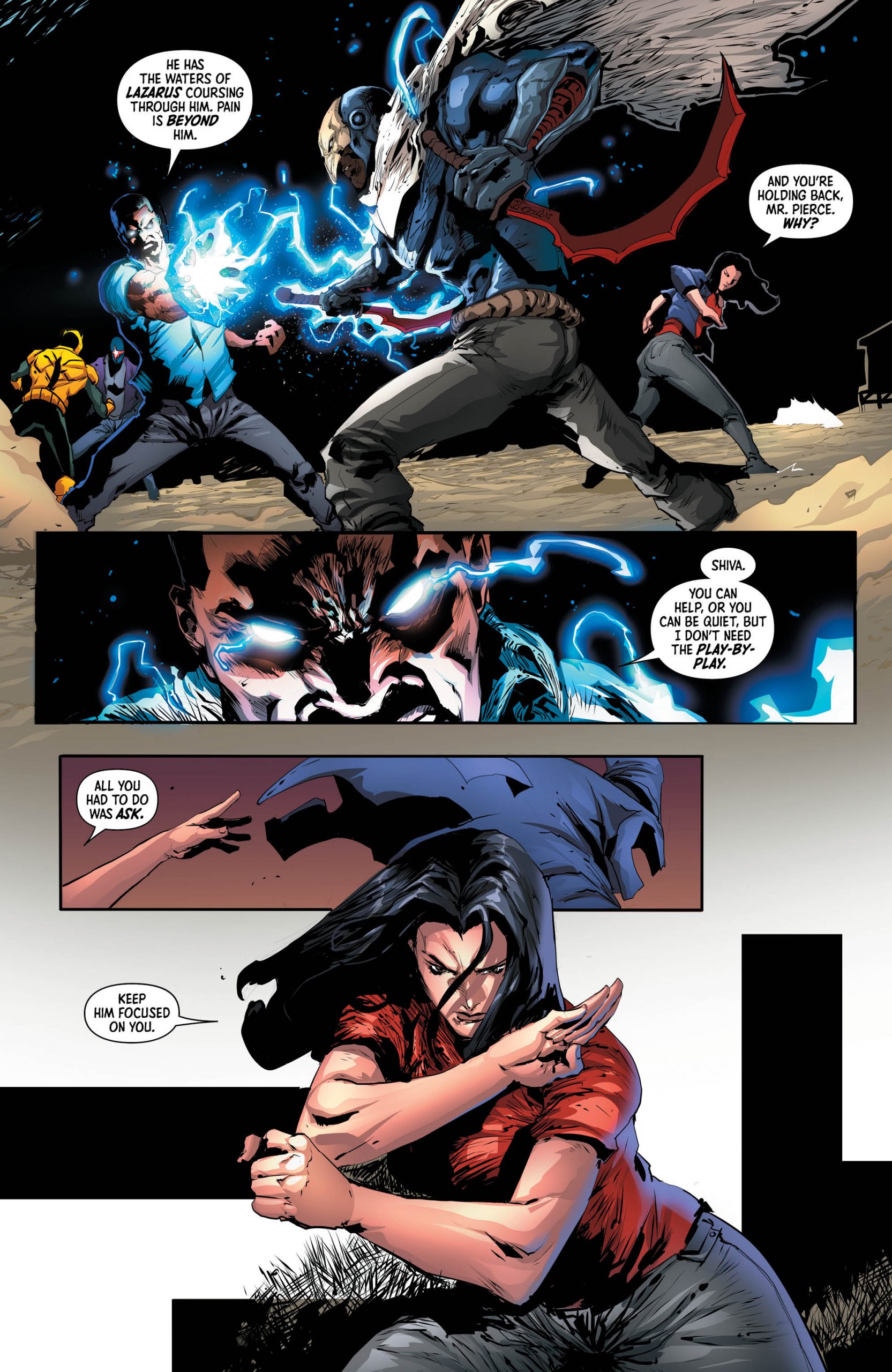 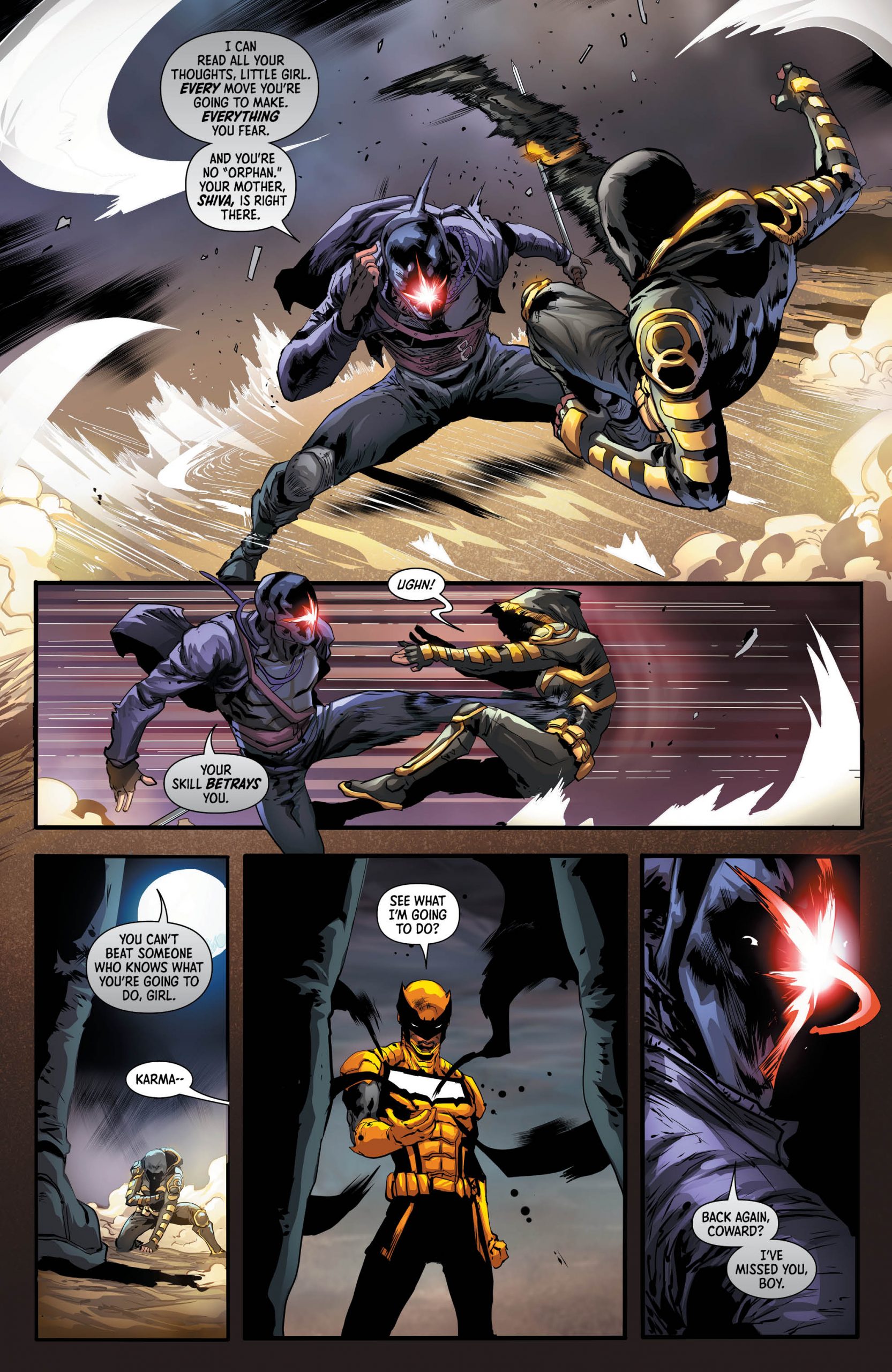 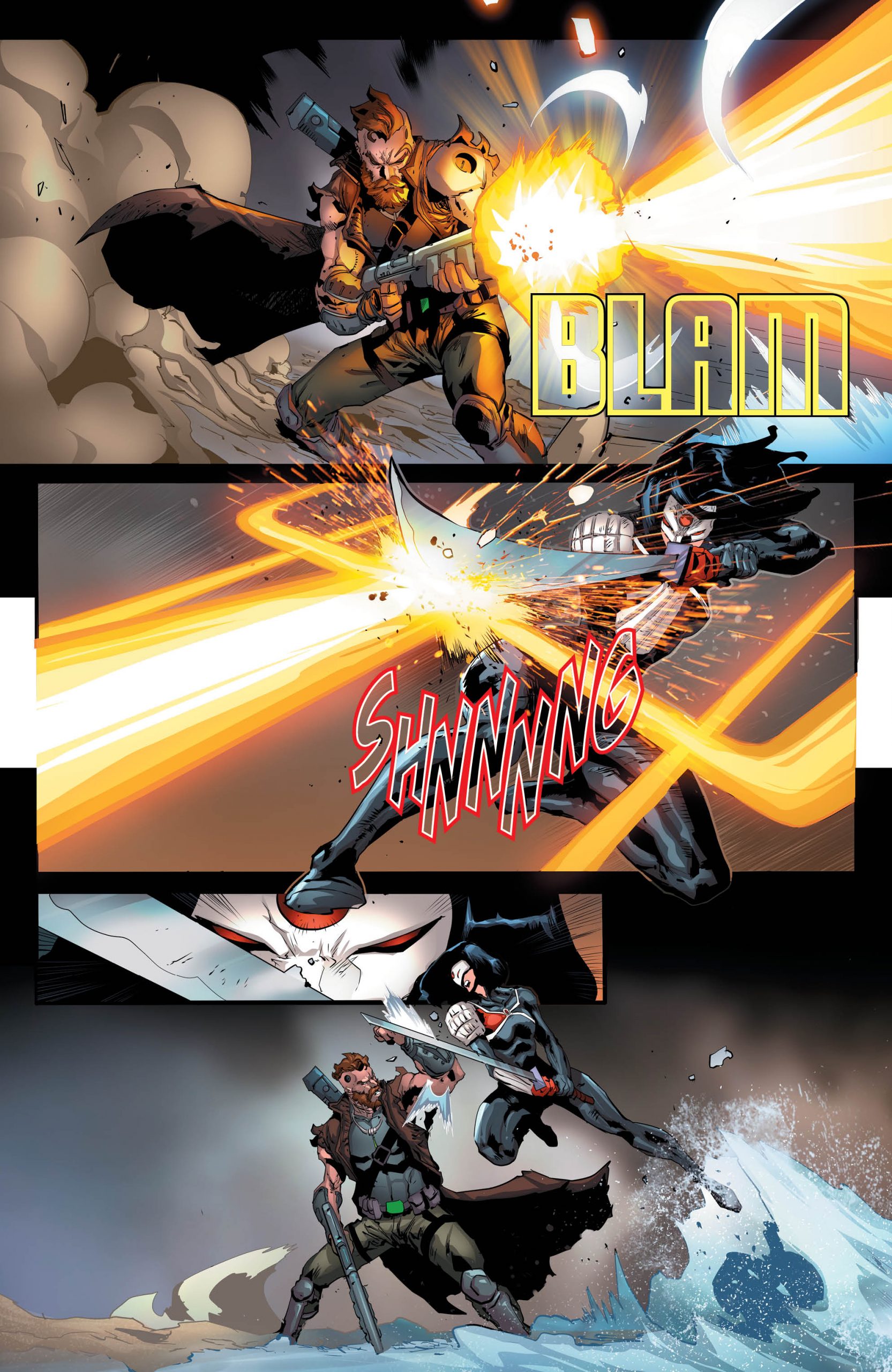 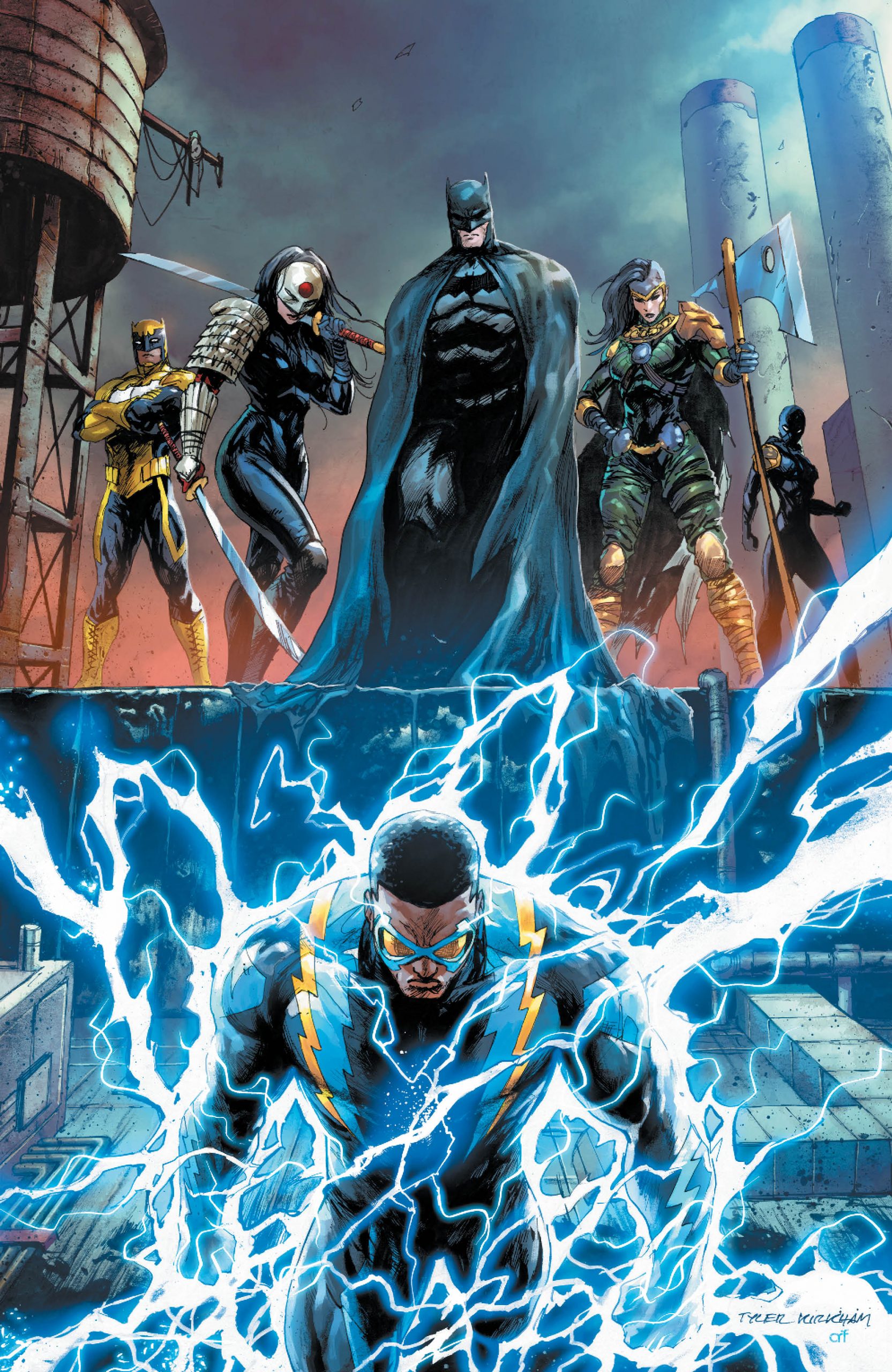 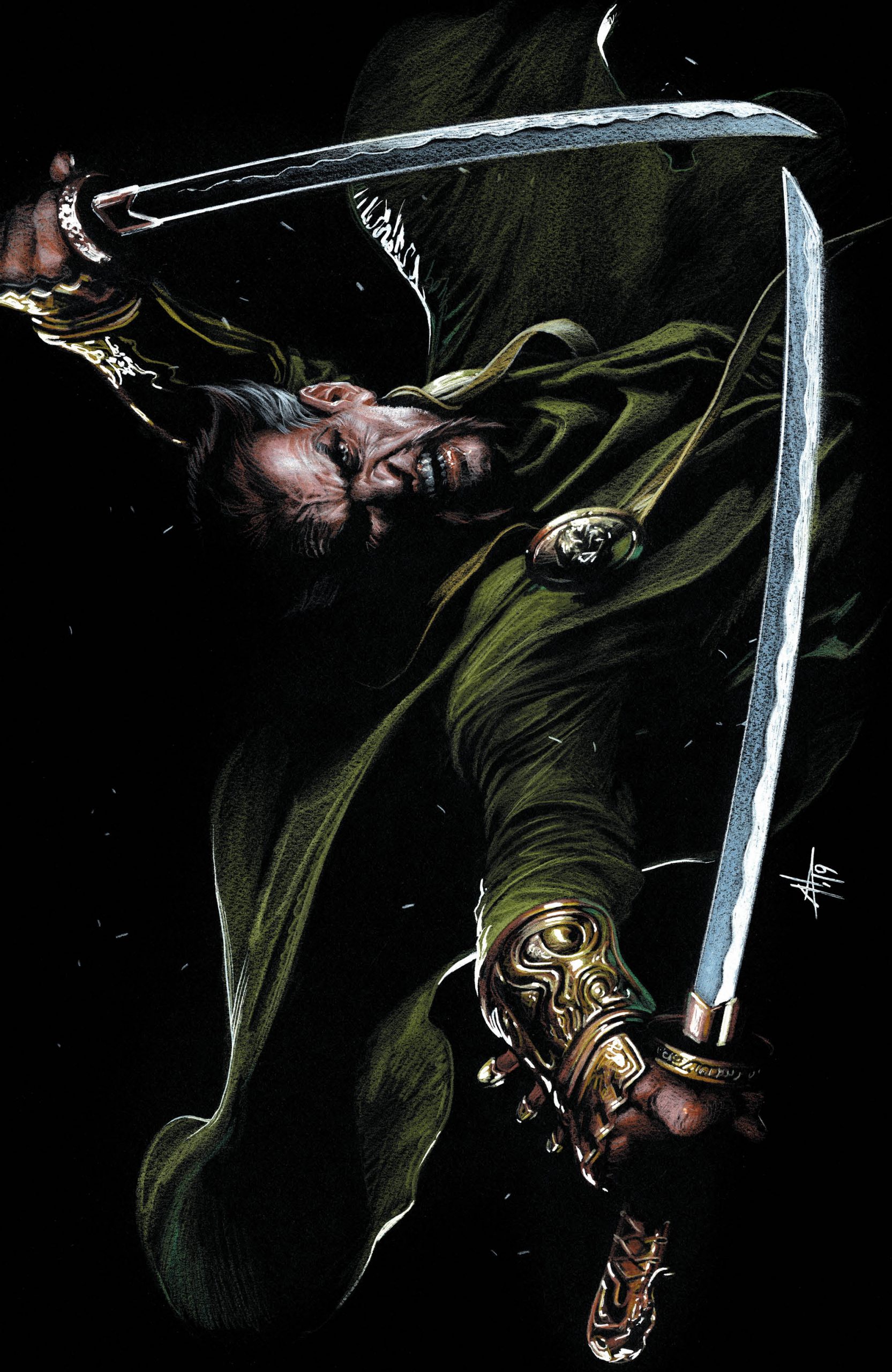 From cover to cover Batman And The Outsiders #11 is an action packed, and character filled entertainment fest. The fight scene, gorgeously rendered by the amazing team of Dexter Soy and Veronica Gandini, is a joy to behold, and the interspersed scenes featuring Batman with Sofia, and Ra’s Al Ghul on the march are every bit as riveting. This issue is wonderfully paced, with words and pictures working together in perfect harmony.

We get a quiet start, all shadows and intrigue, followed by a splash-page that deserves to be reprinted as a poster, or at the very least in the 2021 DC Comics calendar.

The issues isn’t all muscles and mayhem, though. Sofia’s decision to join Batman and The Outsiders on their crusade has led her to a crossroads, and she’s joined the Dark Knight on a path that only a select few have been worthy enough to in the past. Next month will mark the first anniversary of this new title, and I suspect that it will be every bit as explosive as the turncoat Kaliber’s surprise at the end of this issue.

Once again, this chapter has delivered perfect marriage of sequential writing, art, colors and lettering. Just look at pages 1, 2 and 6 – reproduced above. The Outsiders is a team that is only now starting to gel, but Bryan Hill, Dexter Soy, Veronica Gandini and Clayton Cowles are a well oiled comics machine.

If anyone wants to get into comics that will be regarded as vintage by future generations, all they need to do is pick up this stellar new run of Batman And The Outsiders.