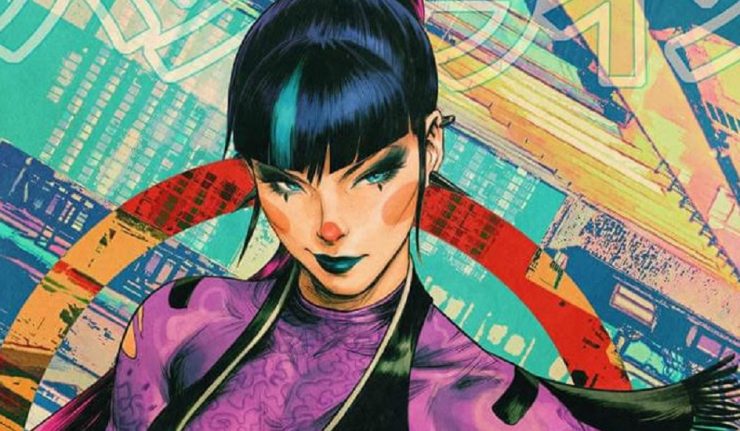 Current Batman writer James Tynion has opened up about how he created the latest Bat-Villain, Punchline.

Since seeing the preview of the character design, Punchline has already taken Bat-fans by storm. Despite only making a partial appearance in the latest Batman #89, Punchline is proving popular amongst many fans, even inspiring cosplayers already.

In an interview with Comicsbeat.com, Tynion discussed how he came to create the Joker’s new henchwoman. For Tynion, Punchline fills a role that Harley Quinn used to occupy. However, given Harley’s success since becoming independent from the Joker, Tynion elected to create a totally new character.

Here’s the writer on his creative process:

I realized, “Oh, I really, really love this dynamic, but there’s a figure missing”, and the figure that’s missing is the chief henchman, the number two character. Obviously, Joker has one of the most iconic, top henchmen of all time in Harley Quinn, but Harley has evolved to the point where it would be extremely regressive to pull her back to a position that she hasn’t been in for twenty years.

The Design of Punchline

The popular design of Punchline is attributed to upcoming Batman artist Jorge Jimenez. Tynion recounted how Jimenez created the look and how his own description of the character helped inspire the artist.

I’d landed on the kind of description where if Harley was the twisted angel on Joker’s shoulder, Punchline is the devil on the other shoulder. That helped shape her, and then when Jorge gave us the design, Ben Abernathy, the editor of the book and I were just like, “Holy crap. She looks freakin’ awesome!”

What’s Next for Batman

Expect Punchline to play a prominent role in the upcoming Batman story arc “Joker War”, Tynion teased, regarding what comes next. Due to Batman essentially weaponizing many of Gotham City’s resources, the Joker may start using that against him.

Wouldn’t it suck if somebody got their hands on all of the same tools that allow (Batman) to print Batmobiles in an hour? It’s one of those things where they’re going after the resources of Batman. The munitions of “Joker War” are the same munitions that Batman built to fight his war on crime. It’s Batman’s designs used against him, ultimately.

Punchline will also appear in Year of the Villain: Hell Arisen #3 and Batman #90 hits comic shops on March 4.