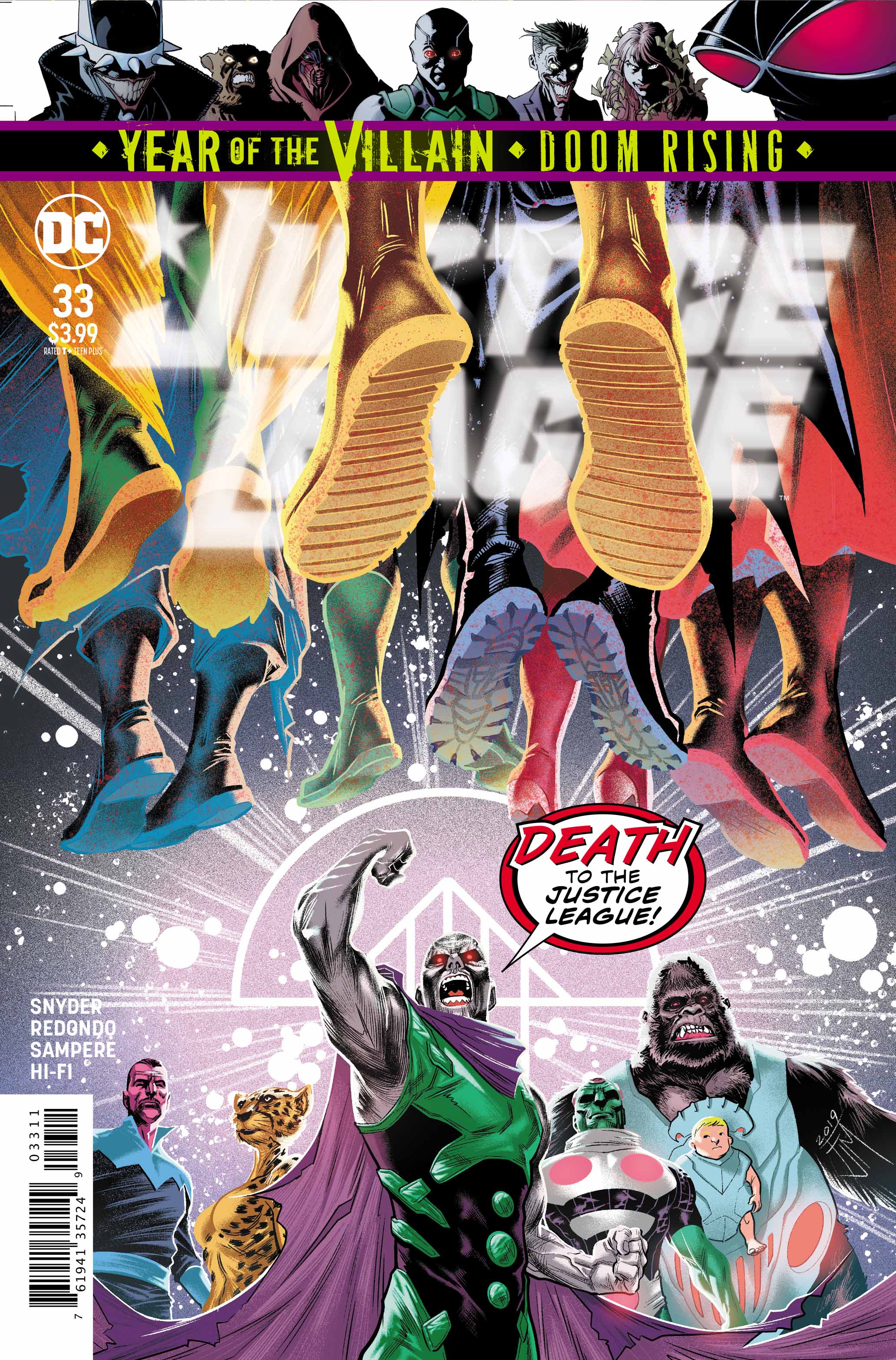 The Monitors go full-on fusion dance in this week’s Justice League #33, as the newly minted ‘Ultra-Monitor’ squares off against the evil goddess, Perpetua.

As the War of Justice and Doom rages on, the Legion of Doom continues to have the upper hand in the conflict. Nevertheless, the Justice League has managed to recruit the Anti-Monitor. Therefore, when Starman and Hawkgirl confront Perpetua and Luthor, they’re joined by the three Monitor brothers (the Monitor, Anti-Monitor, and World Forger) who in turn hold hands and fuse into a single entity known as the Ultra-Monitor, who m squares off against Perpetua, while Hawkgirl and Luthor trade blows.

Meanwhile, The Flash, Green Lantern, and Aquaman have teamed up with the Justice Society. They’re heading to Atlantis in search of the Conch of Arron from the Aquaman/Justice League crossover, Drowned Earth. Upon arriving at Atlantis, the team is confronted by Sinestro, Cheetah, and Grodd, who have enslaved Poseidon.

In the future, the Trinity has teamed up with Justice League One Million and Kamandi in an effort to thwart Brainiac. The newly upgraded Brainiac has learned how to bottle portions of hypertime as he searches for the missing piece of the Totality.

Snyder and Tynion continue to produce solid scripts. Justice League #33 has three main plotlines, and Snyder and Tynion manage to juggle them with ease. No one story feels truncated, they all feel relevant and meaningful to the overarching plot. Each issue throws a surprise curveball at the reader that feels like a game-changer for the larger DCU.

Although this issue is fun, it’s not perfect. Personally, I found the Ultra-Monitor concept a bit hokey and trite. The merging of powers is an overdone plot device (see Dragon Ball Z, Power Rangers, Voltron, Captain Planet, etc.) While this deus ex machina is a common approach to comic book storytelling, the Ultra-Monitor was supposed to be a fist-pumping moment that struck me as flat. 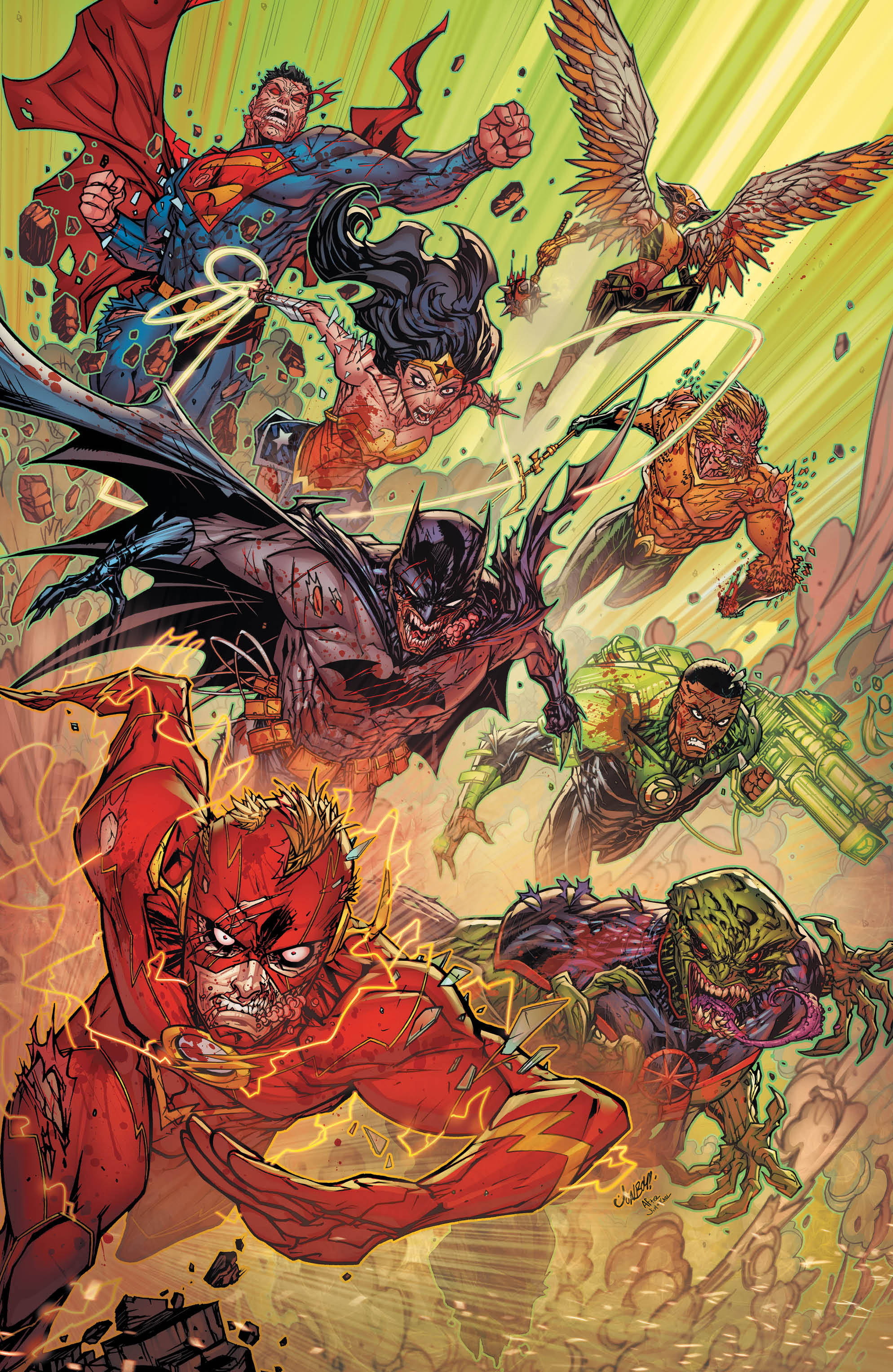 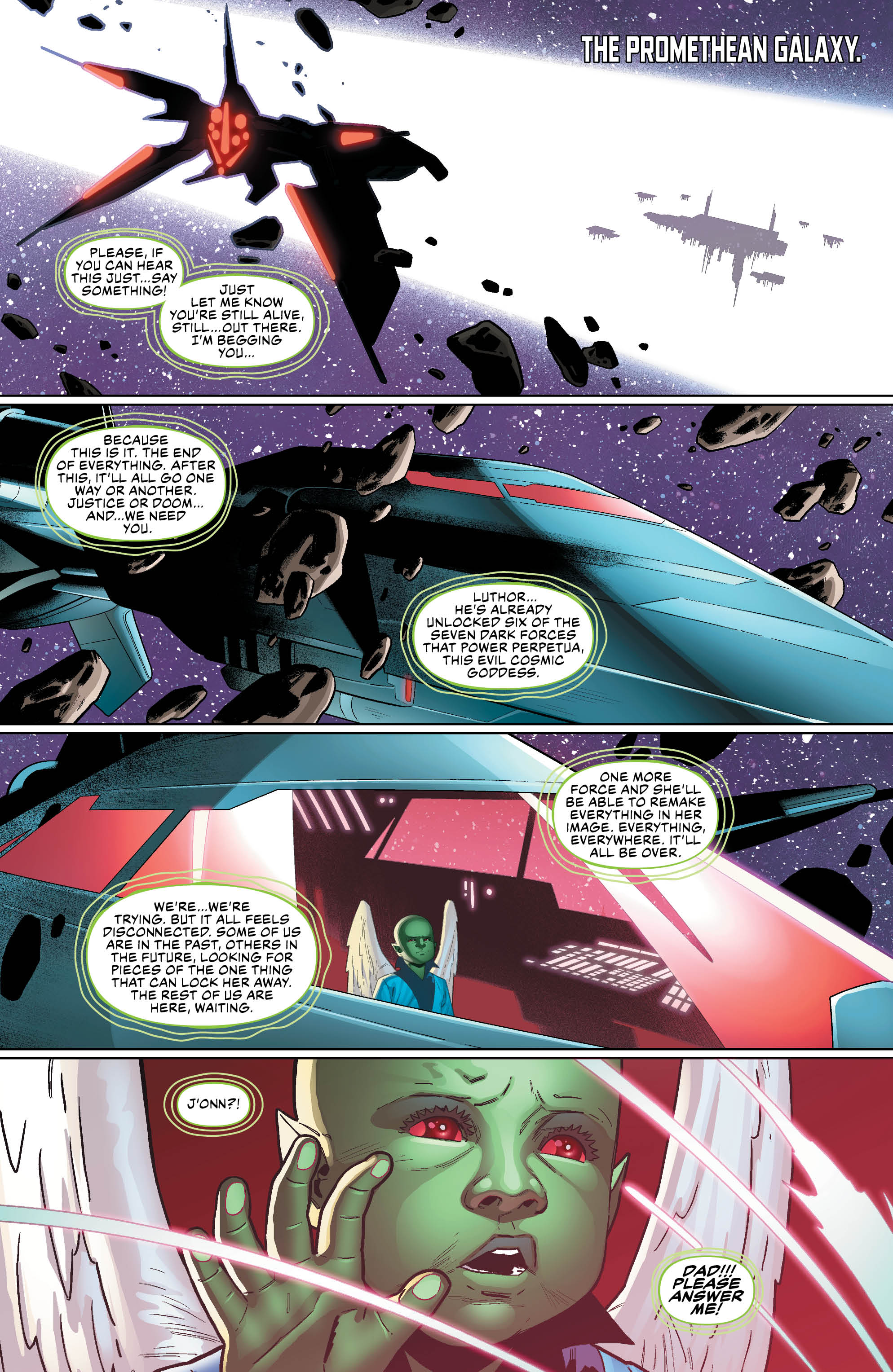 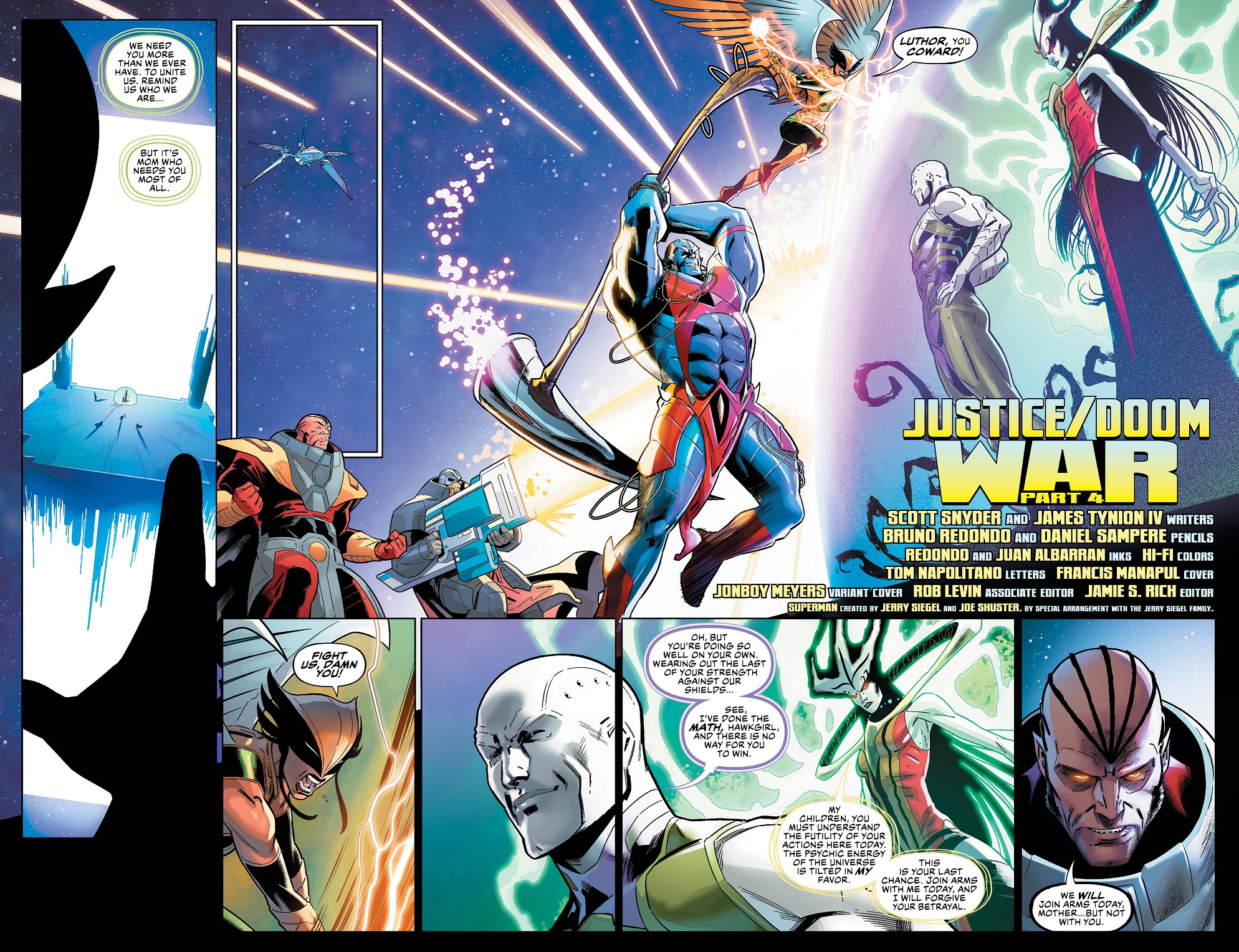 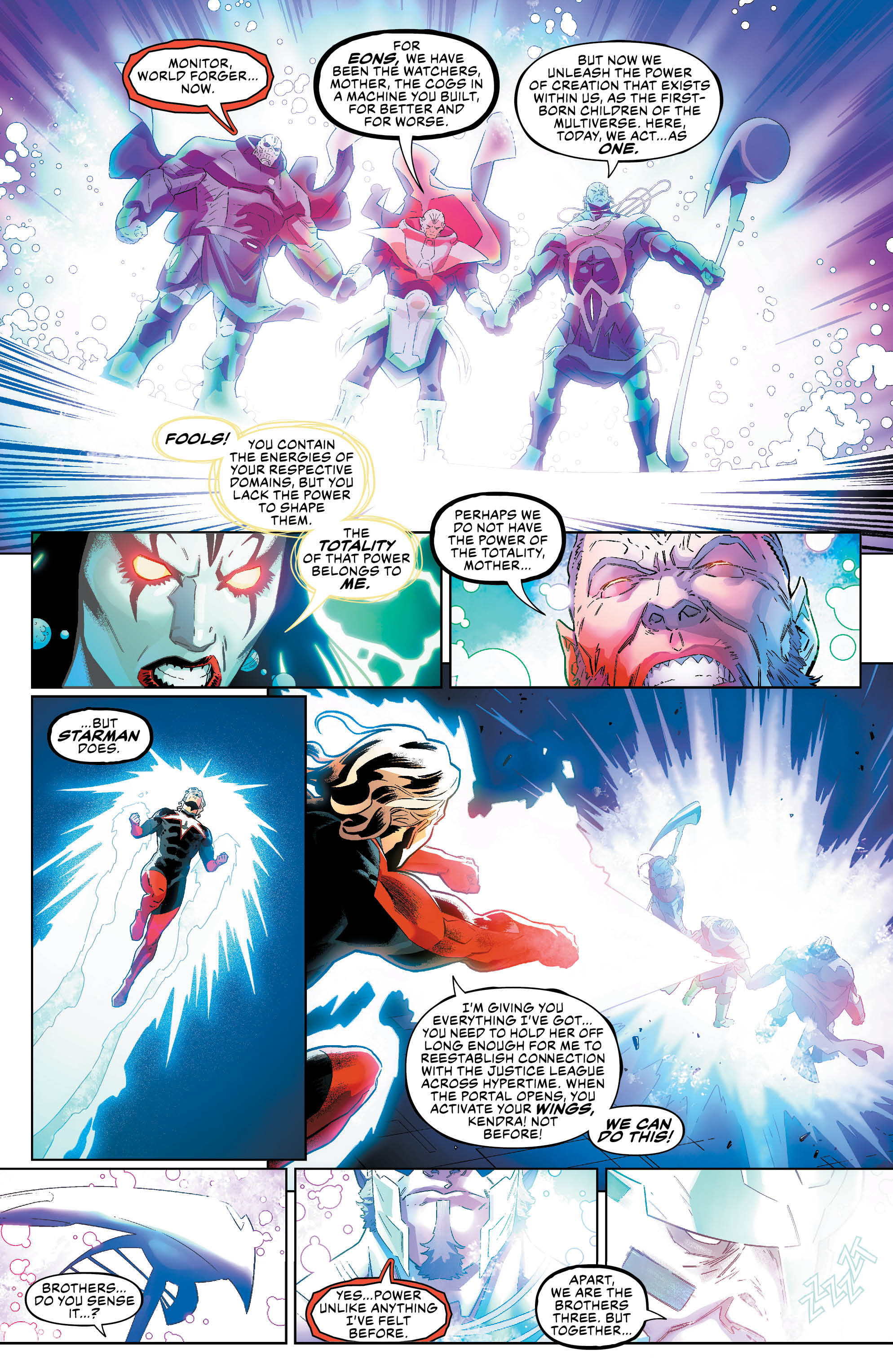 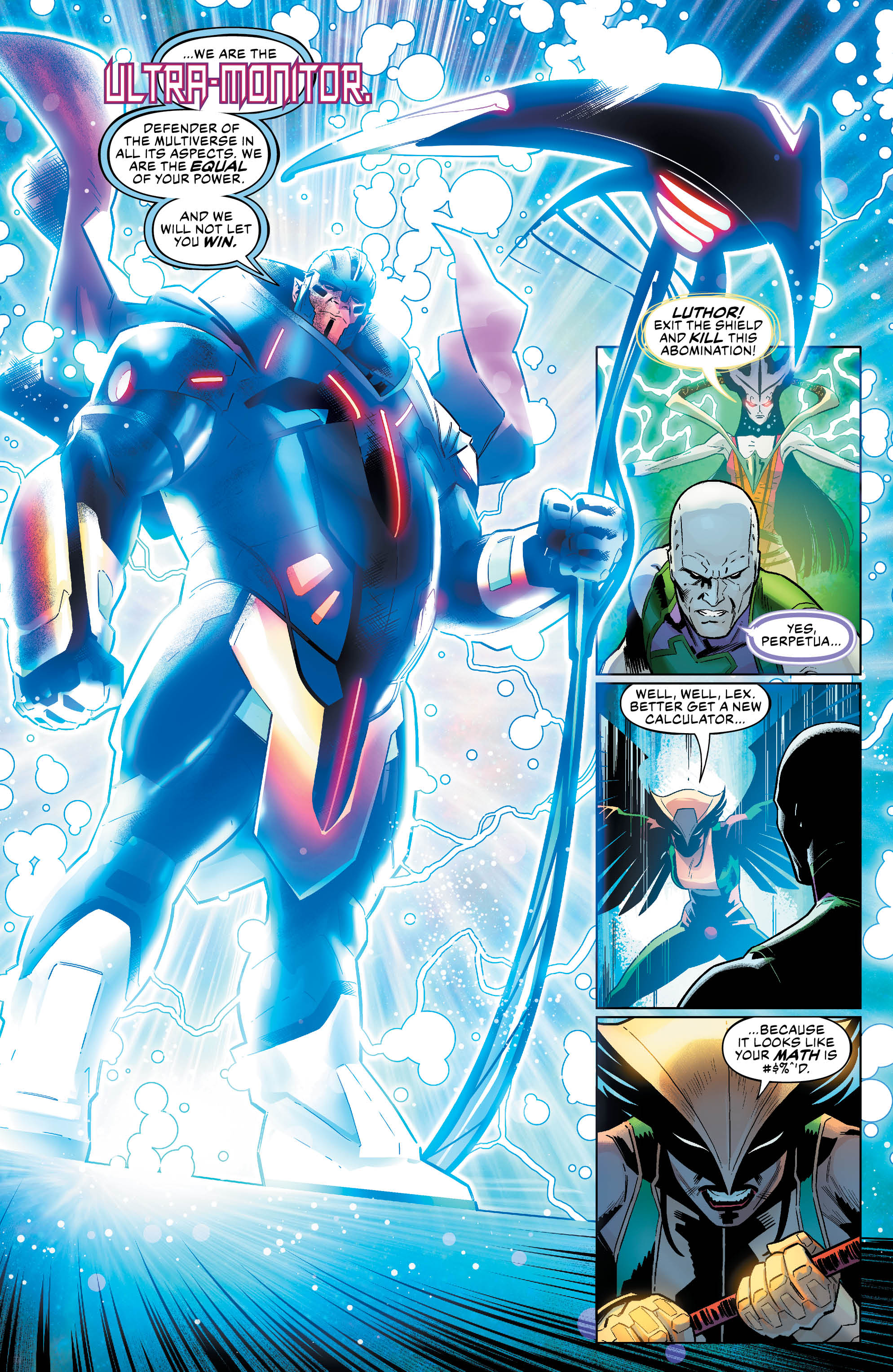 The “Justice/Doom War” story arc has been artistically all over the place. It began with Jorge Jimenez for the first two issues, followed by Howard Porter last issue, and this week’s pencils were drawn by Bruno Redondo and Daniel Sampere. Redondo and Sampere’s work is perfectly serviceable. They’re both talented artists who know how to draw an A-list title. Nevertheless, the shift in style is noticeable. Jimenez and Porter both are incredibly stylized; it’s easy to identify either artist’s work. Redondo and Sampere’s pencils, while good, feel a bit generic. Their work isn’t nearly as distinct as Porter’s or Jimenez’s.

Justice League #33 is a solid but not amazing issue. Snyder and Tynion’s script is fun, although cheesy at moments. Both writers know how to plot a book, leaving the reader wanting more, as the issue closes with fantastic cliffhanger. With regards to Redondo and Sampere’s art, it gets the job done, despite its lack of pizzazz. Overall, Justice League #33 is a minor dip in quality, but it’s still a pretty good issue.