Starting in 2017, DC Comics changed irrevocably because the [email protected] insane crossover from the unsettled minds of Scott Snyder and Greg Capullo, when they unleashed Dark Nights: Metal upon the world. From that epic event, we received quite possibly the most nightmarish version of Batman we could ever ask for. Enter the Batman Who Laughs; a horrifying amalgamation of Batman and Joker and the breakout star of Dark Nights: Metal. Cloaked in a leather executioner’s outfit reminiscent of Hellraiser’s Pinhead, sporting Joker’s sadistic wide grin, and accompanied by chained Jokerfied Robins, this was a Batman that never appeared in my dreams… though he’s likely been the subject of many nightmares. Imagine that thing sitting on your shelf… chills. Well, you needn’t imagine any longer, as Kotobukiya, makers of highly stylized anime-inspired statues, has an ARTFX statue of the Batman Who Laughs ready to haunt you.

Available for pre-order now, the Batman Who Laughs ARTFX Statue by Kotobukiya will be sold by Sideshow Collectibles. Kotobukiya is reputed for overstylizing their statues to match an anime aesthetic and it works with a character like the Batman Who Laughs. The character design is already pretty ridiculous and exaggerated, so he kinda lends himself to the anime style.

Take a look at the prototype below: 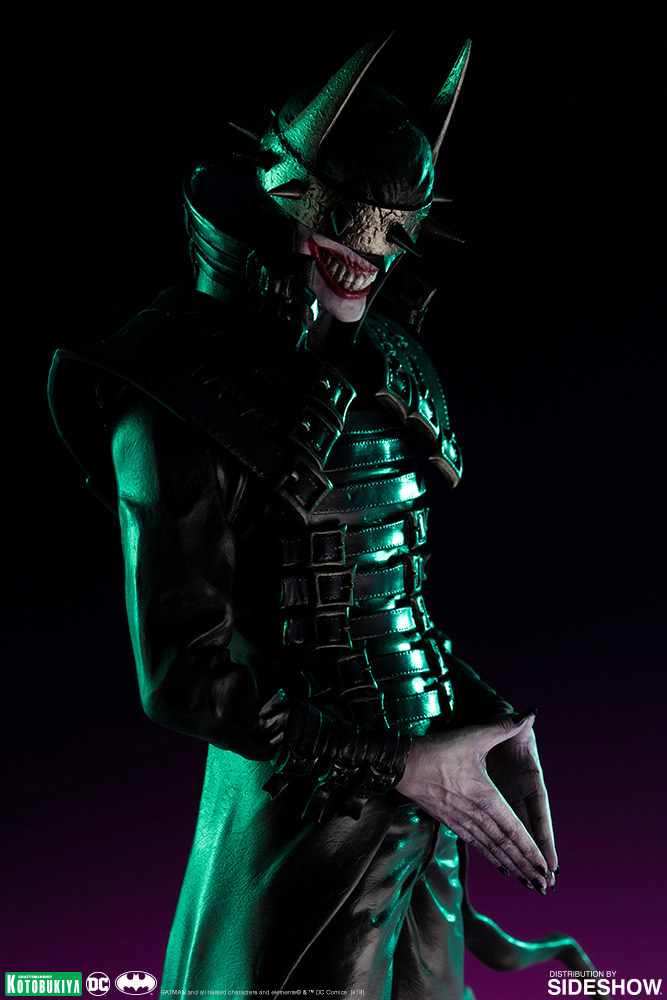 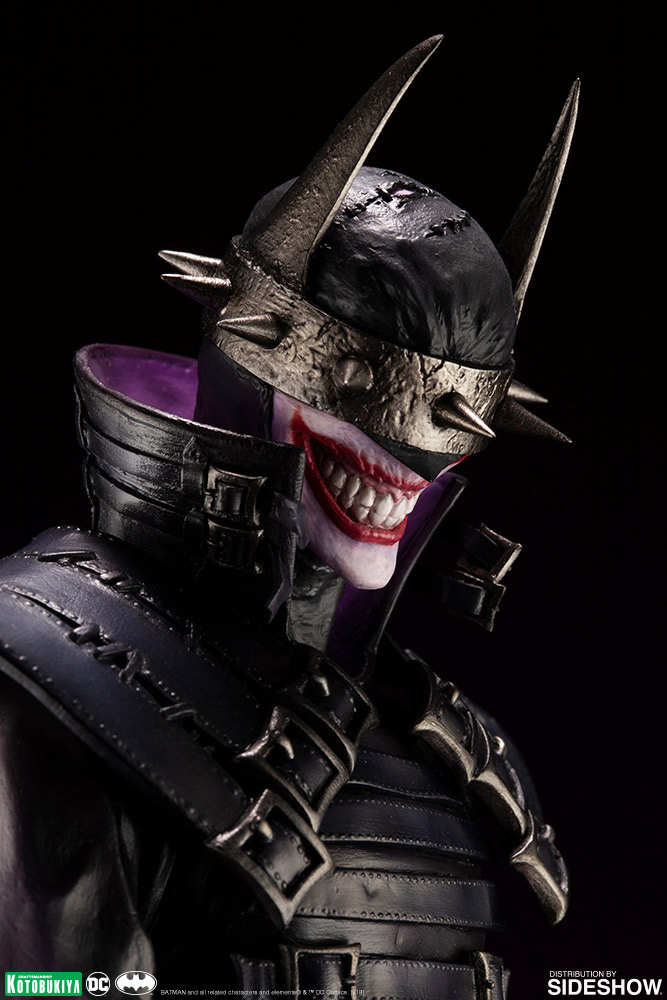 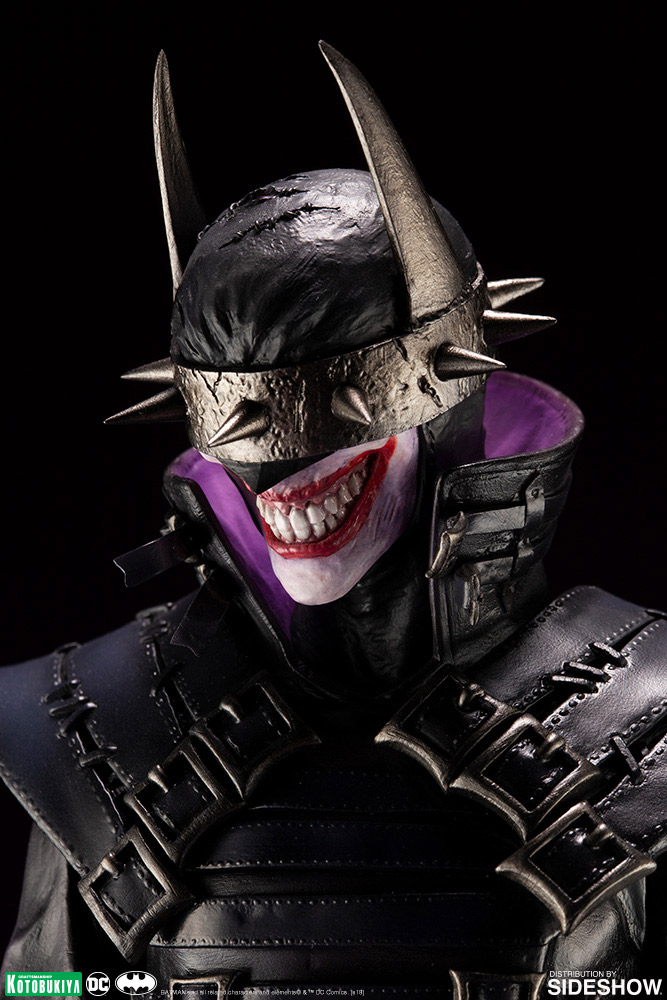 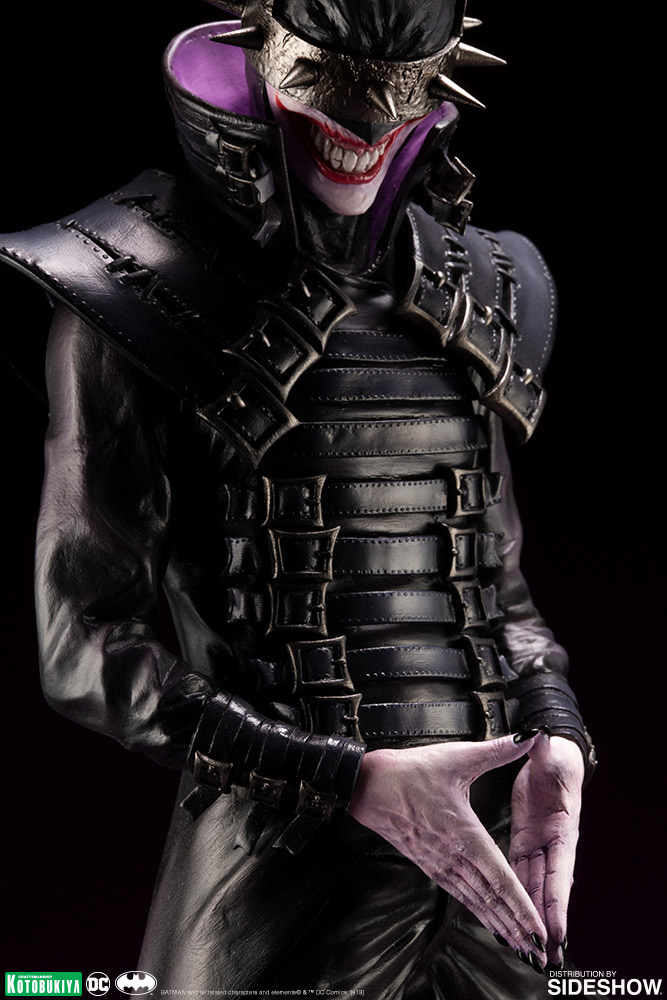 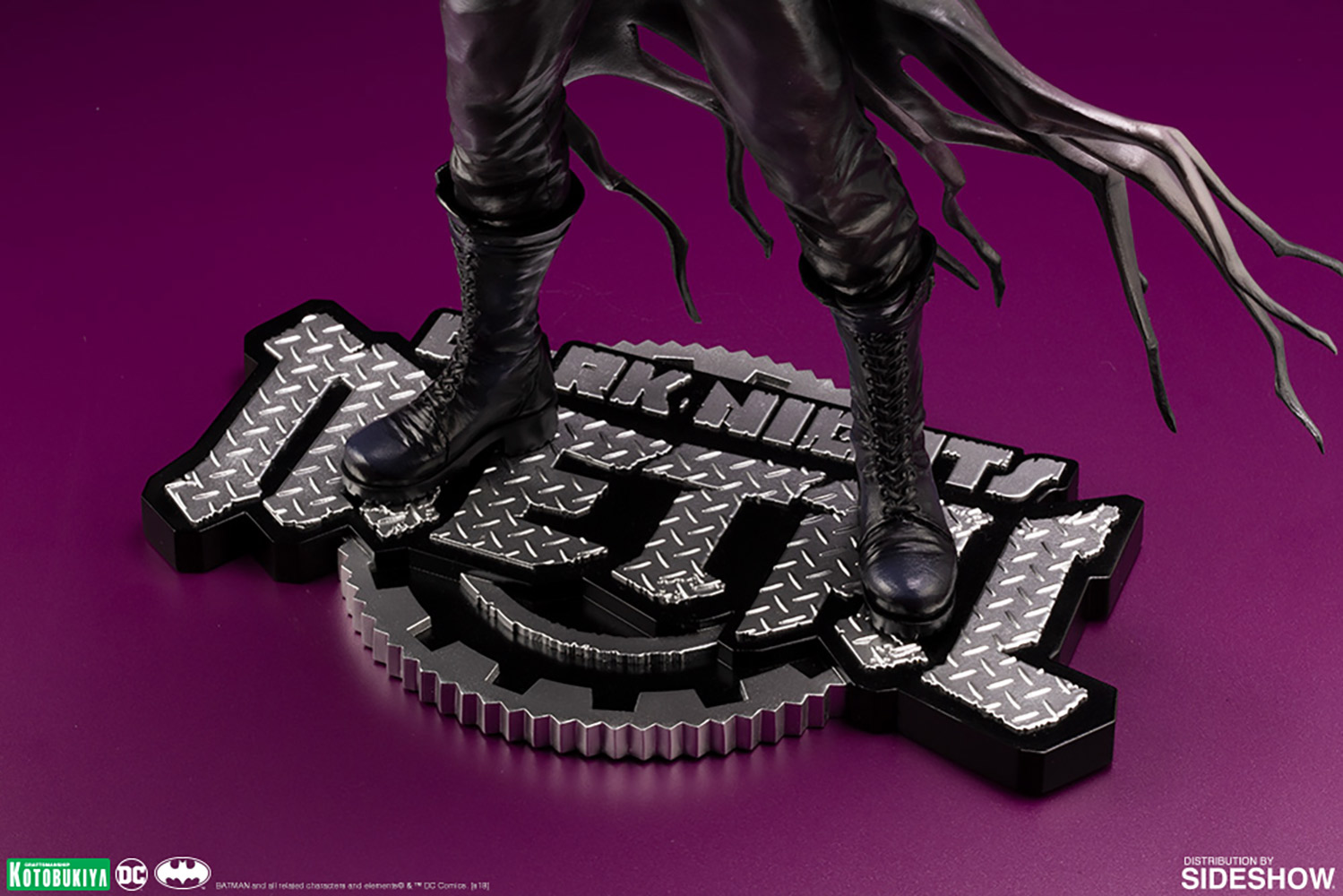 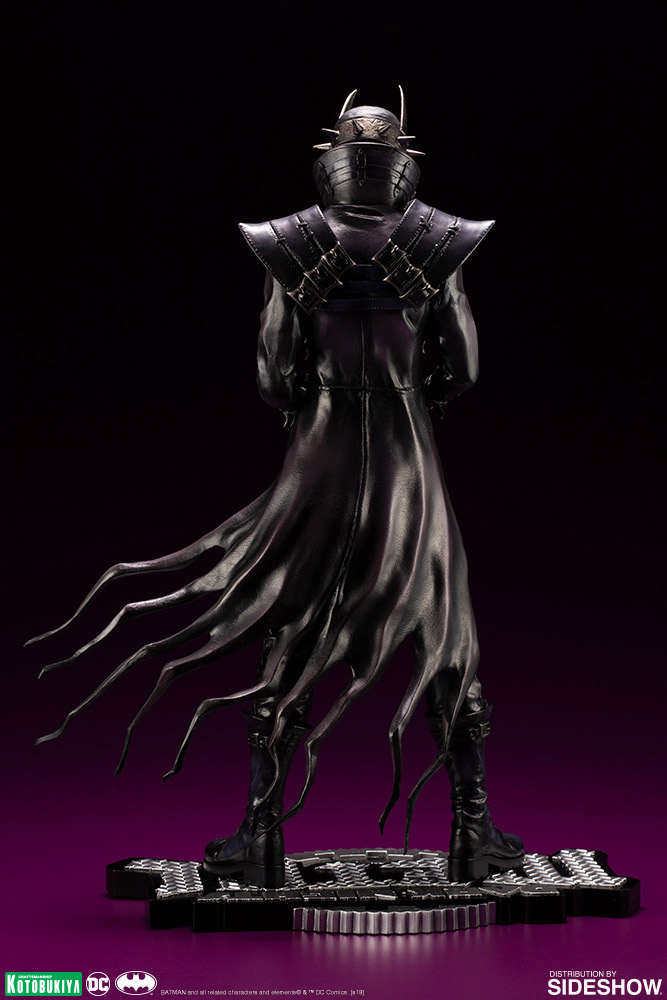 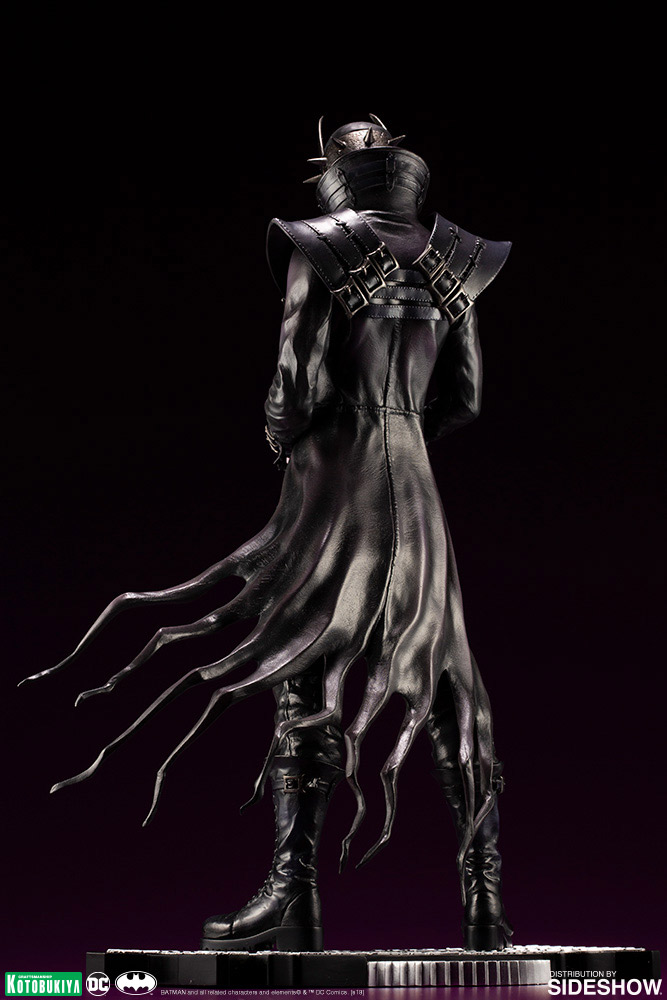 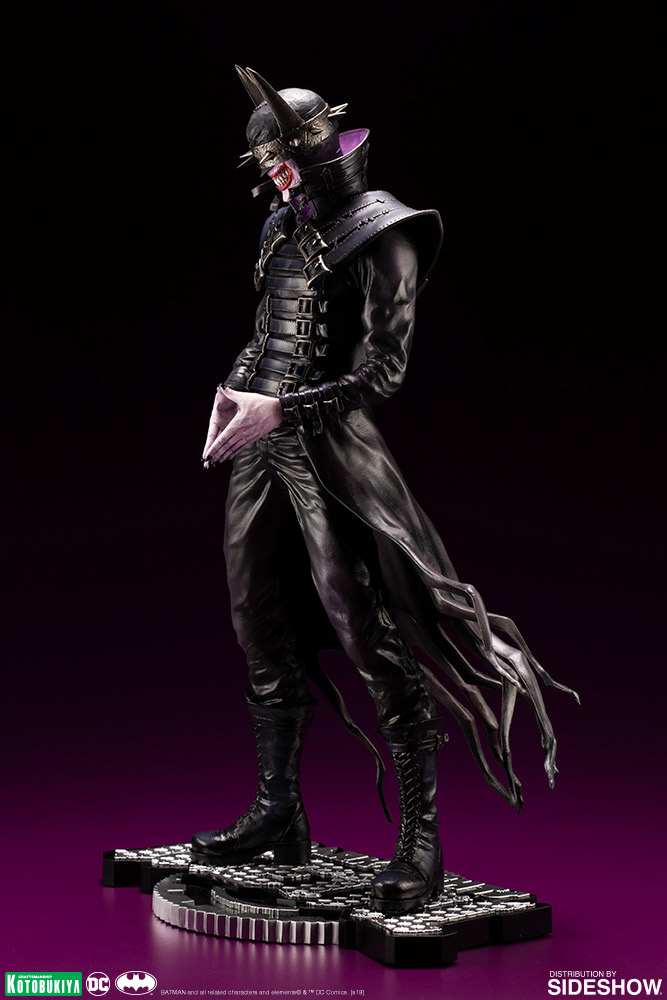 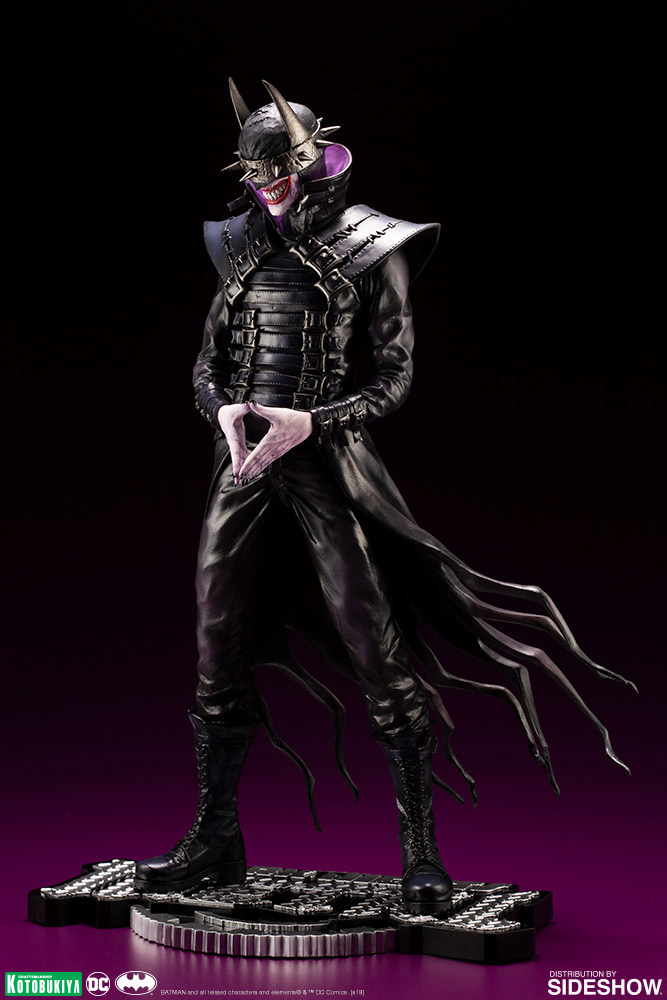 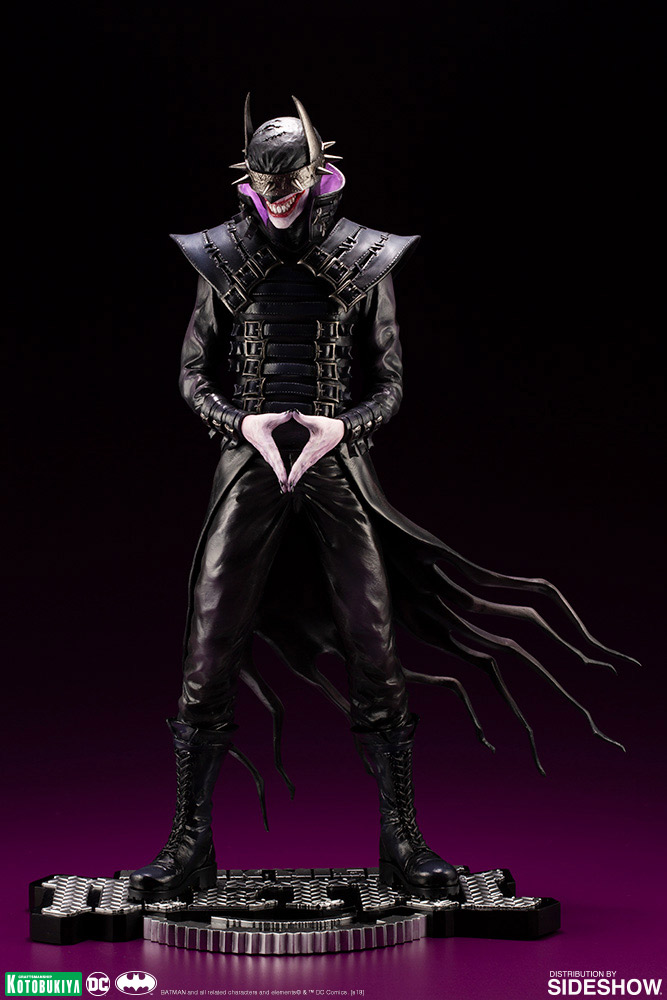 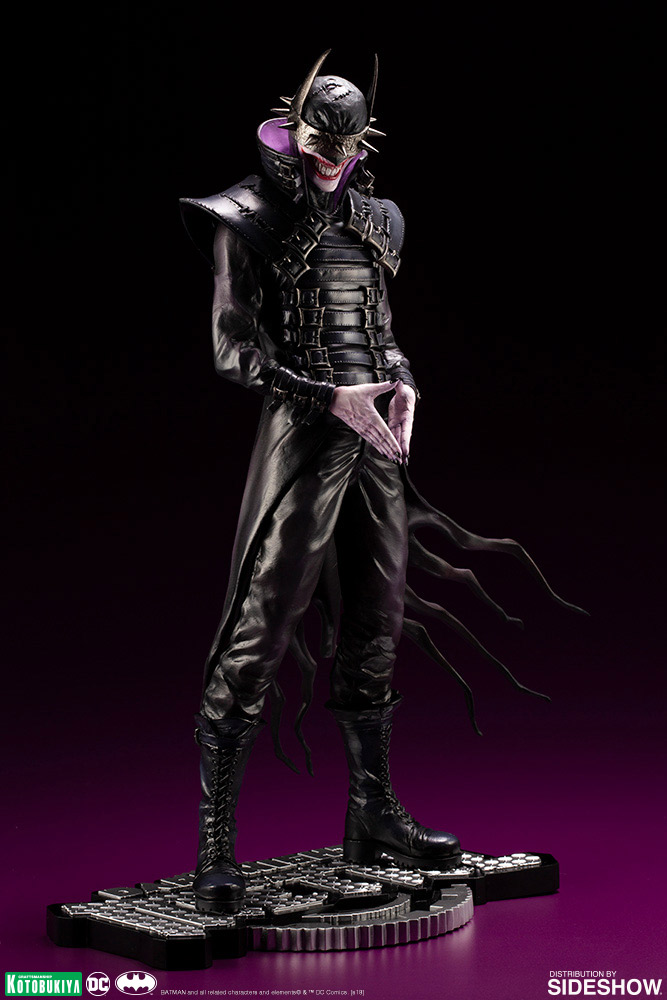 Anime version of Batman Who Laughs?

think my favorite part is his cape. It’s not just scalloped, it’s just straight torn to shreds, which is an incredibly cool little detail. Is it just me or are the belt buckles along his chest also sculpted a bit to look like his cowl? Another really nice detail.

As a matter of fact, wouldn’t it be awesome to see a Batman Who Laughs anime? Similar to Netflix’s Castlevania? I’d definitely watch that. Just don’t make it in any way similar to Batman Ninja. God, no. *shudders*

Take a look at some of the specs below, in case the photos haven’t convinced you yet:

ABOUT THIS STATUE
Sideshow and Kotobukiya present the Batman Who Laughs Statue!

From Dark Knights: Metal – Dark Knights Rising features the seven nightmare Batmen who exude a terrifying aura. Batman Who Laughs joins the ARTFX series and is sculpted to perfectly represent the Dark Multiverse. Batman who has superior intellect, logic, and the physical power to defeat any enemy has been turned into a fearful enemy who lacks all morality!

This statue perfectly depicts a figure that should only exist in nightmares! Batman has slowly transformed into a figure similar to the Joker. From the belt and buckles to the spikes poking out of the bat cowl the twisted nature can be seen from every angle of this statue. The Batman Who Laughs ARTFX Statue is sculpted in 1:6 scale and the paint job brings out the dark and gothic nature of this figure.

Add this nightmarish Batman to your collection today!

The ARTFX statue of Batman Who Laughs is currently available for pre-order here. It’ll run you about $150, but considering all that incredible detail, I’d say it’s worth it. The statue is expected to ship between April – June 2020. While I think it looks incredible, I will not be getting this one for myself. I’d saw it’s because I’ve seen too much Toy Story to want something like that lurking around in my house when I turn a blind eye.

Also, check out Steve J. Ray’s reviews of The Batman Who Laughs mini-series.