Following James Gunn’s unceremonious dismissal from Disney, after some tasteless Tweets from years ago were uncovered and brought to light, DC took the opportunity to snatch him up for a property that seemed like a match made in heaven.  The quirky, punky, and rebellious lot known as the Suicide Squad just fit Gunn’s sensibilities and, since then, DC fans have been extremely excited about seeing him bring his offbeat humor and heart to the team.

Recently, a ton of news has cropped up involving what the film that was known as The Suicide Squad. The most talked about, of course, was Will Smith’s departure and Idris Elba’s supposed talks to take over as Floyd Lawton, Deadshot. On top of that, a reported list of characters that will make up Gunn’s Task Force X surfaced including Polka-Dot Man, King Shark, Peacemaker and Ratcatcher. Most of this stuff remains unconfirmed, but at the very least, it seems like Gunn and WB are revving up to start work and this is an exciting time for DC fans.

Time to add some more unconfirmed news to the ever-growing list from WB/DC. According to a production blog, we have one for The Suicide Squad. Apparently, the working title for The Suicide Squad is “El Dorado.” If you somehow missed the wonderful Dreamworks animated film from 2000 and are not versed in Spanish mythology, El Dorado refers to a city of gold. 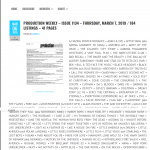 Originally, El Dorado referred to a king who covered himself in gold dust, but eventually as legends tend to change with each new telling of it, it has evolved now to an entire empire. Do yourself a favor and watch The Road to El Dorado for a good education… I’m only half-joking here It’s a good movie. Honest.

A quick Google search found that El Dorado is also the name of a character that exists in DC continuity. He is a Mexican superhero with various powers, who was introduced in the Hanna Barbara cartoon, Super Friends before being worked into the DC universe. The cursory research showed that his powers have nothing to do with gold, but he can teleport, is telepathic, and can create illusions. Based on the earlier report of new lineup for the squad, it seems Gunn isn’t afraid to look deep into DC lore to find an unknown character to play with. It’s not complete hogwash. However, working titles are so named, because they’re the names given to a production before a final title is agreed upon. So, it’s likely that the title is temporary and will change yet again. Sometimes, the working title has actually nothing to do with the movie itself.

Other times, it’s just a rumor where a pinch of salt is your only line of defense. Remember, none of this is confirmed, but it’s always fun to speculate.