“And They All Fell Down” 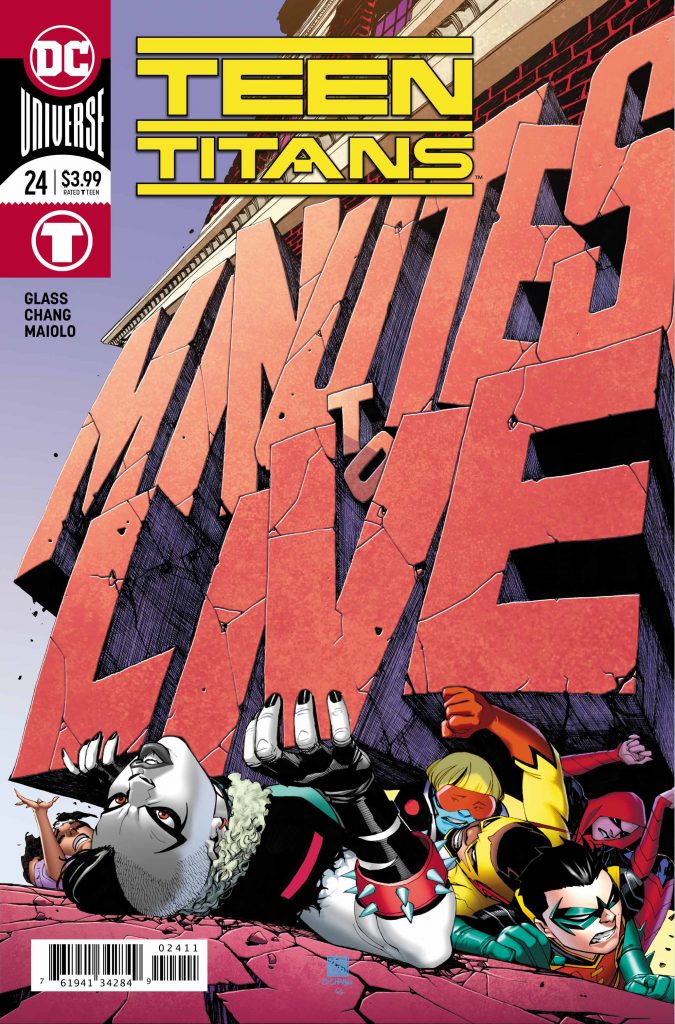 As the Teen Titans #24 cover depicts, the team lies trapped under an avalanche of brick and mortar. On the heels of the #23’s cliffhanger, the Other exploded an entire building which has collapsed on top of the team. In the opening pages of the latest issue we discover that Crush shouldered the rubble, giving the Teen Titans a chance to escape. The issue’s first page sets the tone, artistically using creatively placed panels to depict different perspectives of the same disaster.

After escaping what seemed to be certain doom, the Teen Titans finally click as a team. Secrets, dark pasts, family problems…they are some messy adolescents! However, each member recognized each others’ flaws and came together in spite of them.

Artistically, Teen Titans #24 was beautiful and evoked emotion. The colors were dark and gritty. Still, when appropriate, they leaped off the page to capture readers’ attention. Inks were heavy and foreboding, depicting the severity of the situation. Creatively placed panels made the issue’s chaotic pace more visceral. 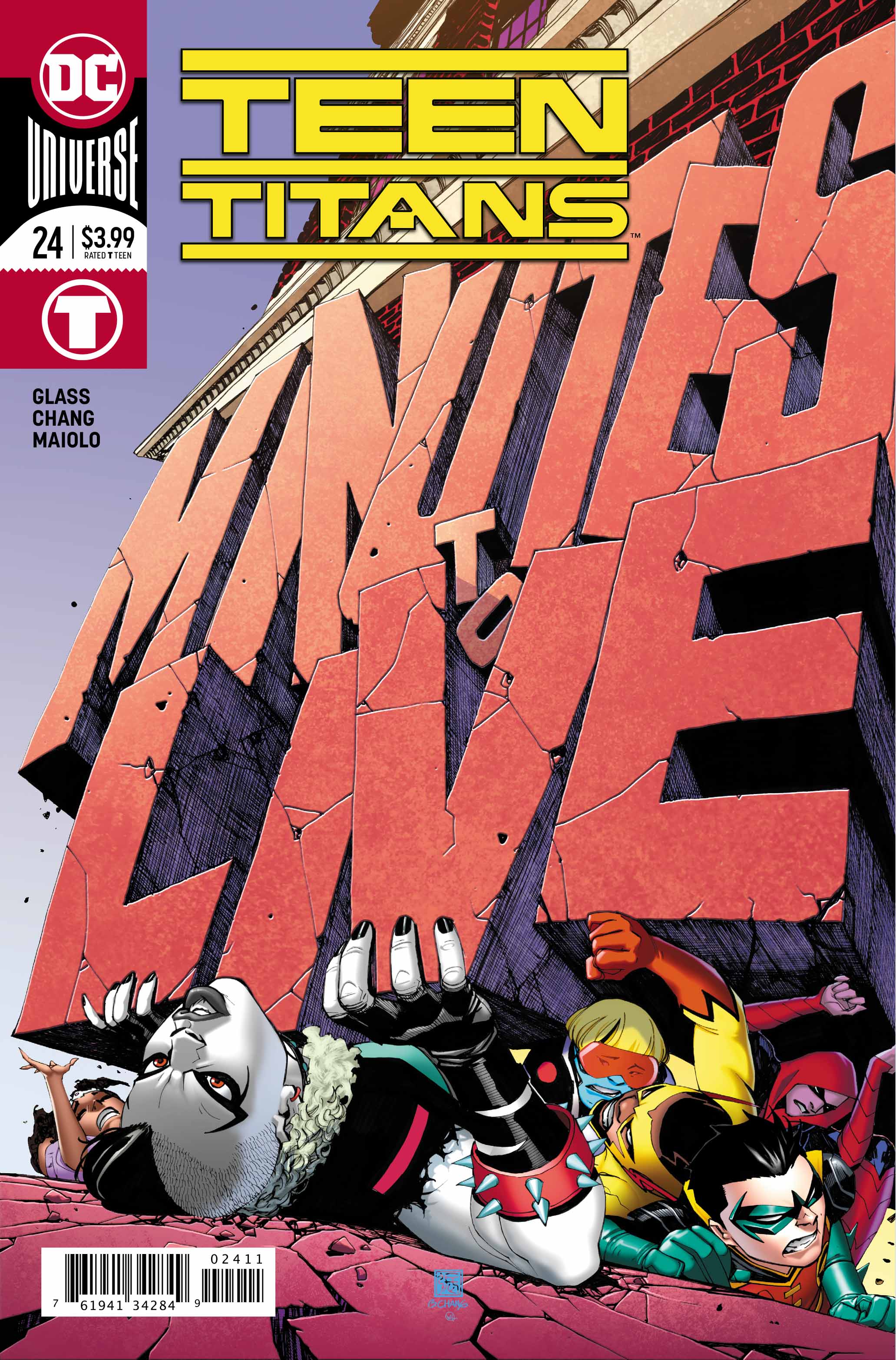 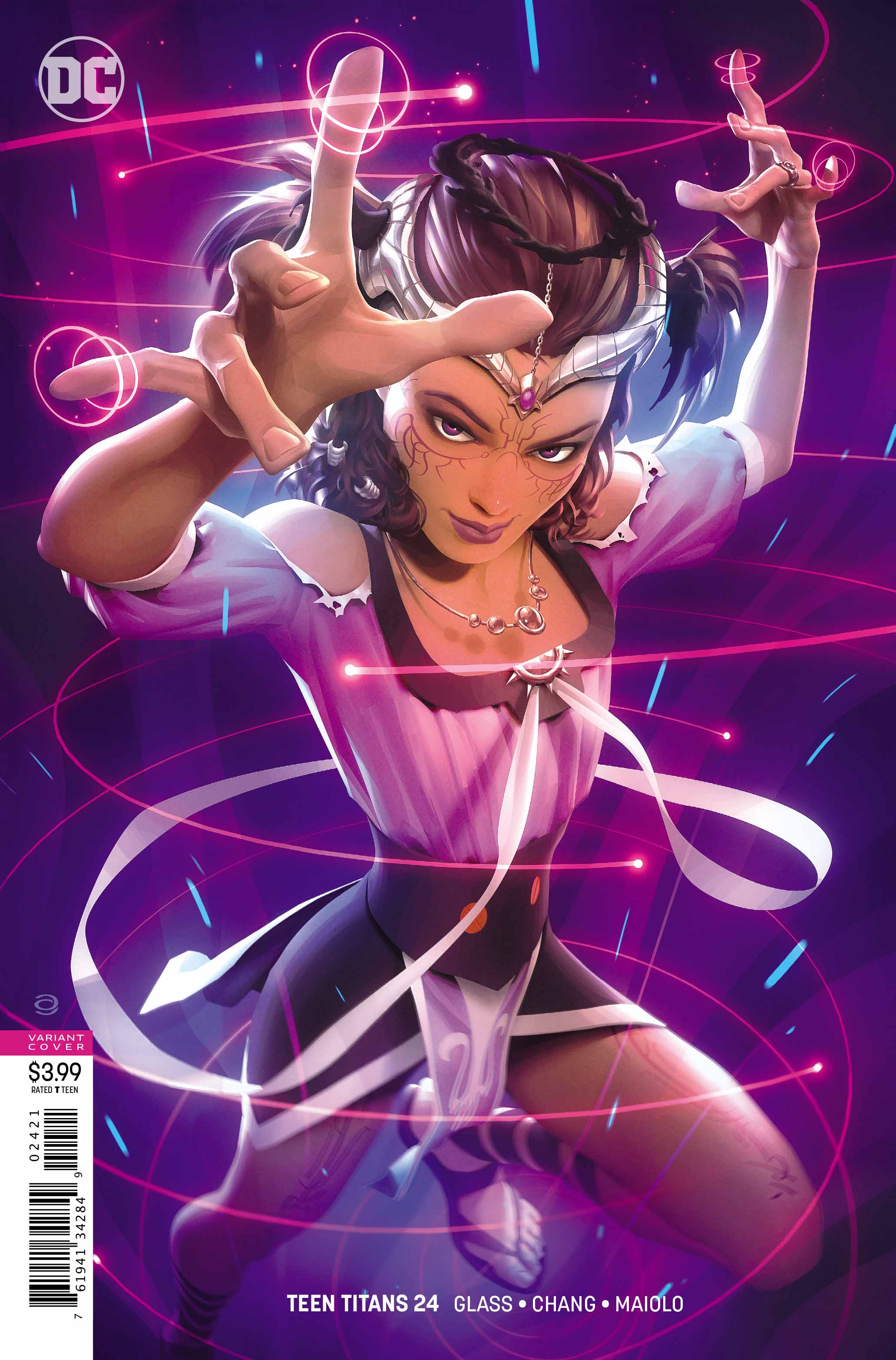 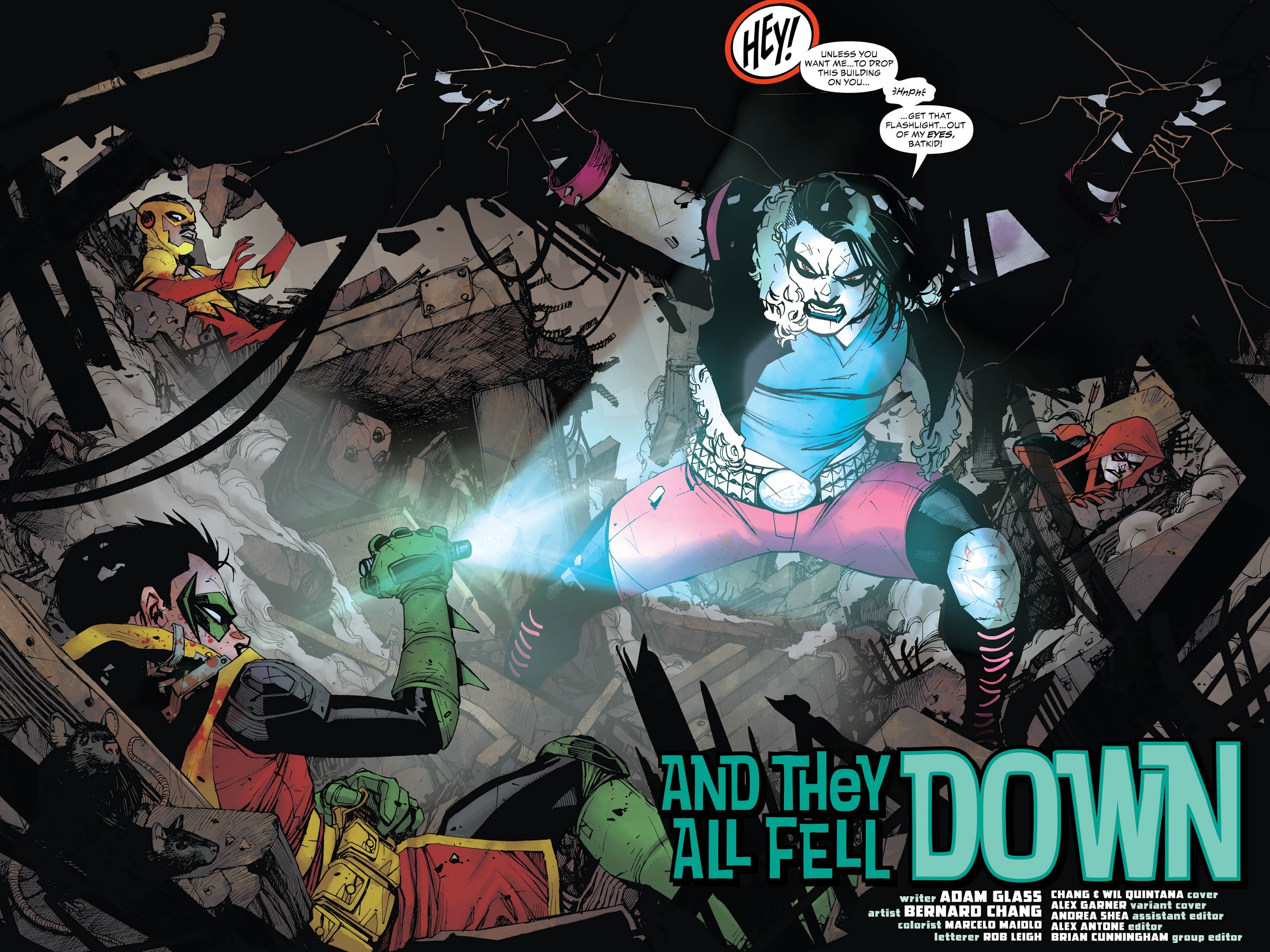 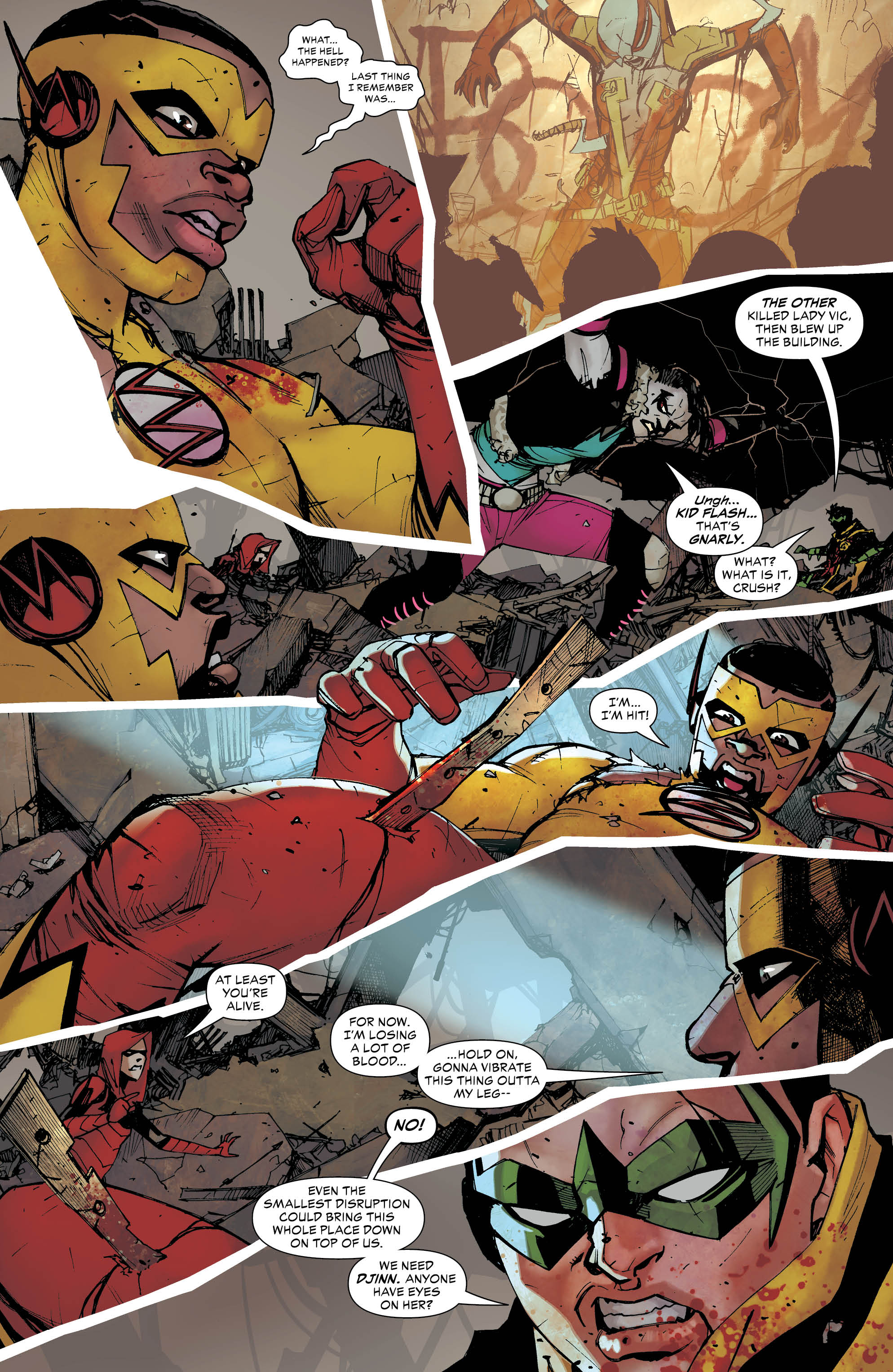 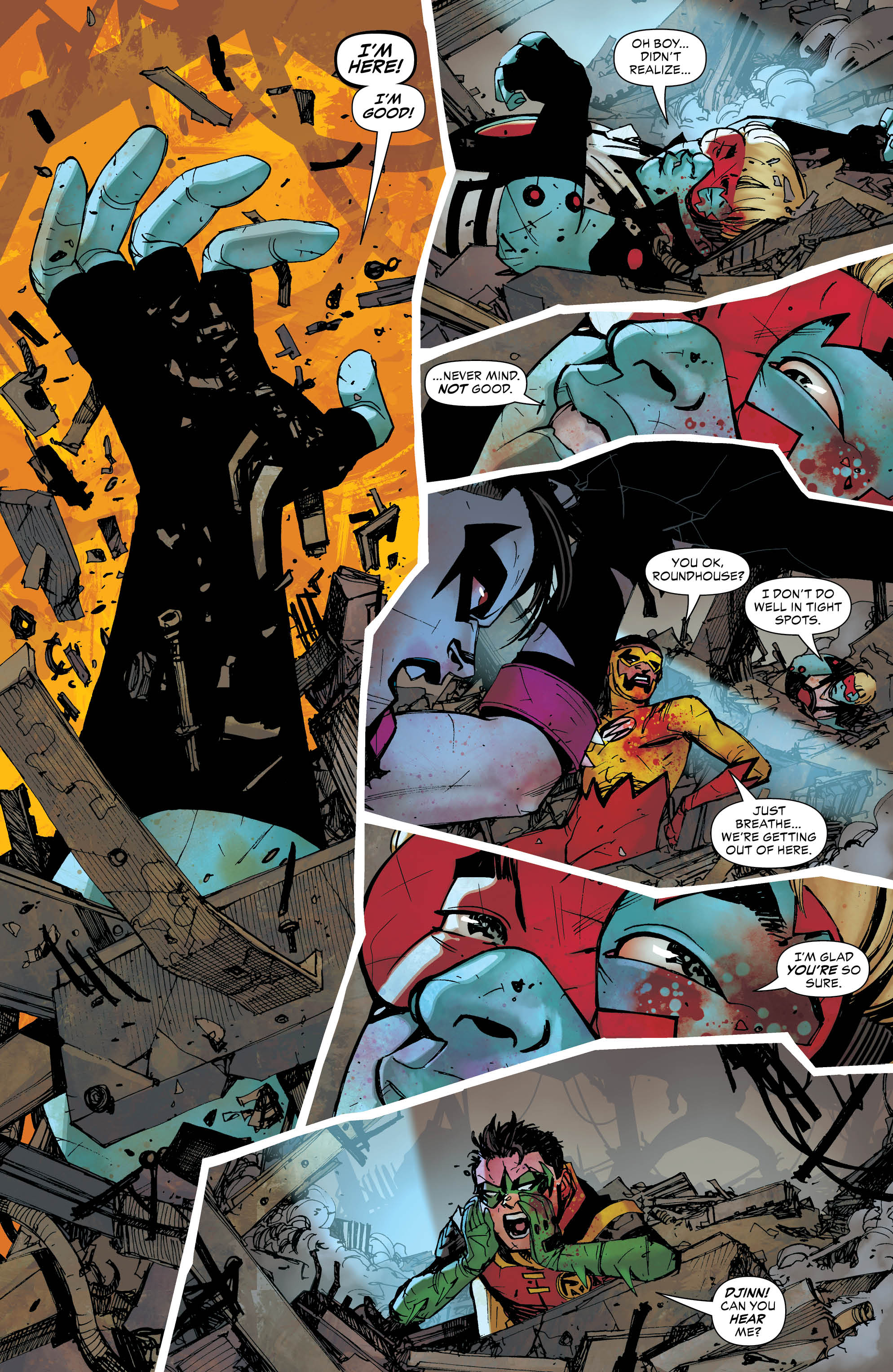 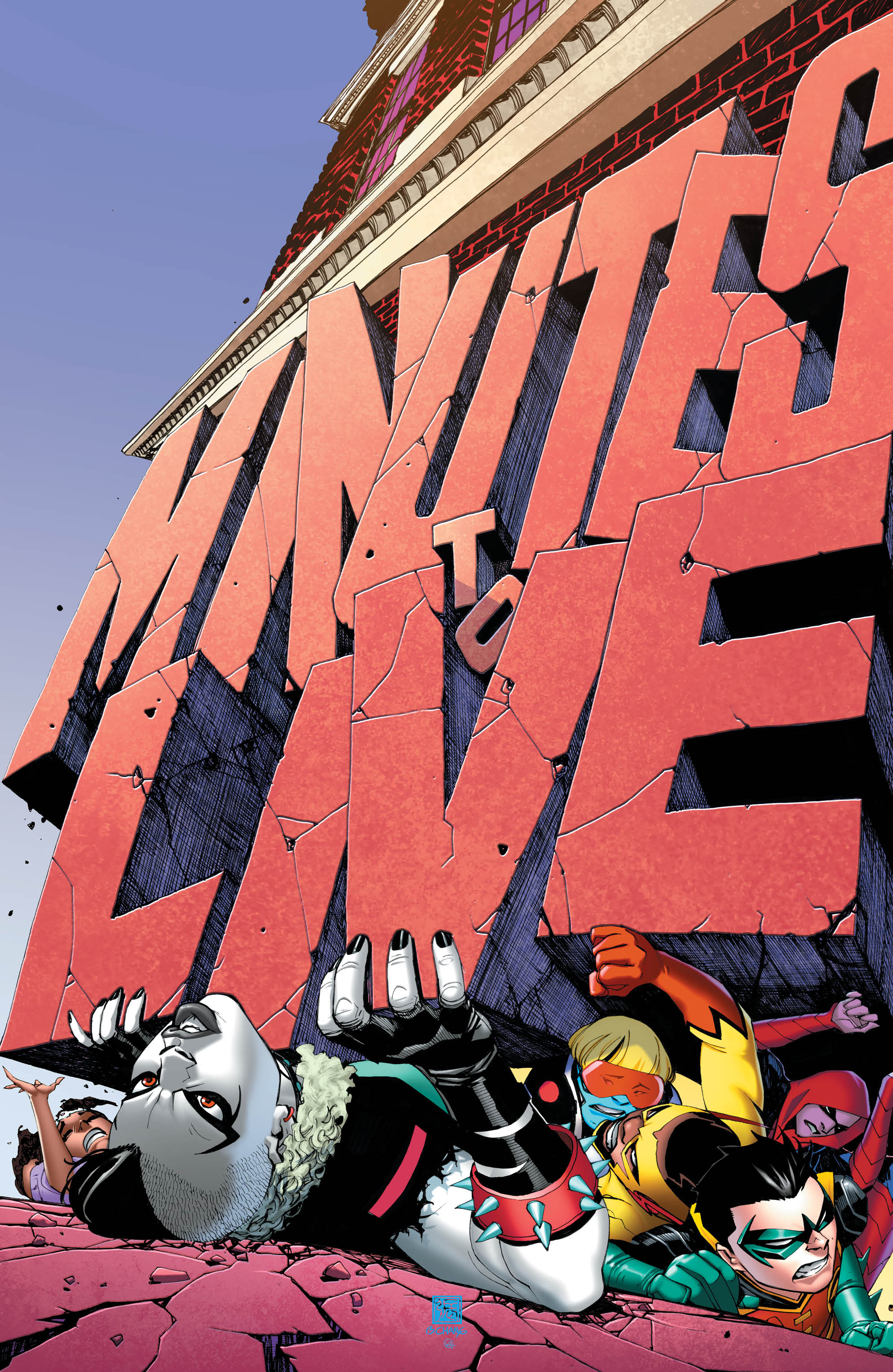 Despite the situation, relationships were front and center in Teen Titans #24. Teammates began to gel, which bodes well for future stories. Still, each retained their depravity – and secrets. What remains to be seen is whether these secrets will come to light (or when!) and if they will fracture the newly attained respect and goodwill. D’Jinn and Robin continued their awkward romance while Red Arrow continued to brood. Could it be Emiko has unrequited feelings for young Damian? Kid Flash and Roundhouse continued their bromance while each humorously crushed on Crush. Good banter, and solid character development here.

This iteration of the Teen Titans has taken a long time to come together. They are, perhaps, the most non-traditional gathering of super side-kicks to have graced the pages of this historic title. For me, it’s taken time to appreciate the team’s makeup. However, they are starting to grow on me, albeit slowly. On the “Other” hand, the Other has turned into a menacing villain/organization. Calculated brutality has raised their stock as a force to be reckoned with, and put the Teen Titans on their heels. Here, there is no easy resolution to beat the bad guys. Adam Glass is weaving an intriguing and high-stakes tale with this team. Let’s hope the title continues with its complexity and doesn’t resolve the story prematurely.