In a world that every day brings not so good news, it is always wonderful to find some joy in this world. Batkid brings us that in spades.

Miles’ story has spread around the world, through the news as well as a documentary that titled Batkid Begins. So much good came from a small boy’s wish.

The news story of Batkid broke officially back in 2013 when the young man got his wish granted to become his favorite super hero by the Make-A-Wish foundation. They set up an entire event in order to make the young crusader’s wish come true. This was an emotion fueled event not only for Miles but his family as well.

This wish meant closure for our family and an end to over three years of putting toxic drugs in our son’s body. 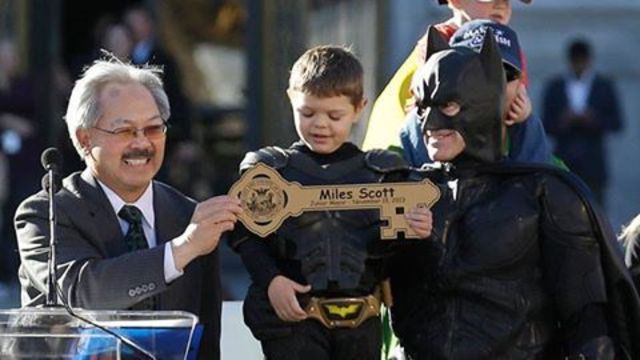 The city of San Francisco was kept safe by Miles as he went through the streets in a black Lamborghini, stopping to take on criminals and save lives at elaborate scenes that had been set up just for the little crime fighter.

“He just thought he was doing his job,” said Jen Wilson, one of the Make-a-Wish directors who put the citywide event together. “He took his work seriously. He thought Batkid might need to stick around.”

And 5 years later, Miles has not only beaten cancer, but has also proven that he believes Batkid is needed. We here at Dark Knight News agree fully and wish him the best of health going forward!

Way to go Miles! May the streets be kept safe by you for years to come!