Fresh off the heels of an epic encounter with The Dark Knight, this week’s Deathstroke #36 shifts gears. Picking up where the title left off in issue #29, writer Christopher Priest embarks on a brilliant new storyline that will focus on Slade Wilson in Arkham Asylum.

After the events of the “Chinatown” arc, Deathstroke was captured by the Superman of China, Terra, and Isherwood and then institutionalized at Arkham. Accordingly, Arkham serves as a perfect backdrop for this issue, as Slade’s mental stability takes center stage. In issue #29 Isherwood told Slade that he had been gaslighting him with regards to Slade’s supposed neural implant: a device programmed with a virtual persona of Wintergreen.  Therefore, it is unclear whether or not Wintergreen is a figment of Slade’s imagination or a manifestation of this supposed implant.

The Not-So Fearsome Brotherhood of Villains

One of the best parts of this issue is watching Slade interact with Batman’s rogues’ gallery during a virtual group therapy session. Trapped in solitary confinement, Deathstroke is forced to use VR goggles to participate in therapy with the likes of Mr. Freeze, Hugo Strange, Victor Zazz, and more. These interactions are comical, as each of these “Past their prime” villains readily admits that they would happily kill Deathstroke given the chance.

One particular character of interest from this session is Devon: an inmate who is apparently a victim of an alien abduction. When introduced in the issue, Devon has hacked the VR system and project himself as Harley Quinn. Hilarity thus ensues as we watch him grope Tweedle Dee (or Dumb – it’s not exactly clear). By the end of the issue, it appears that Devon will be a major player in the upcoming arc. 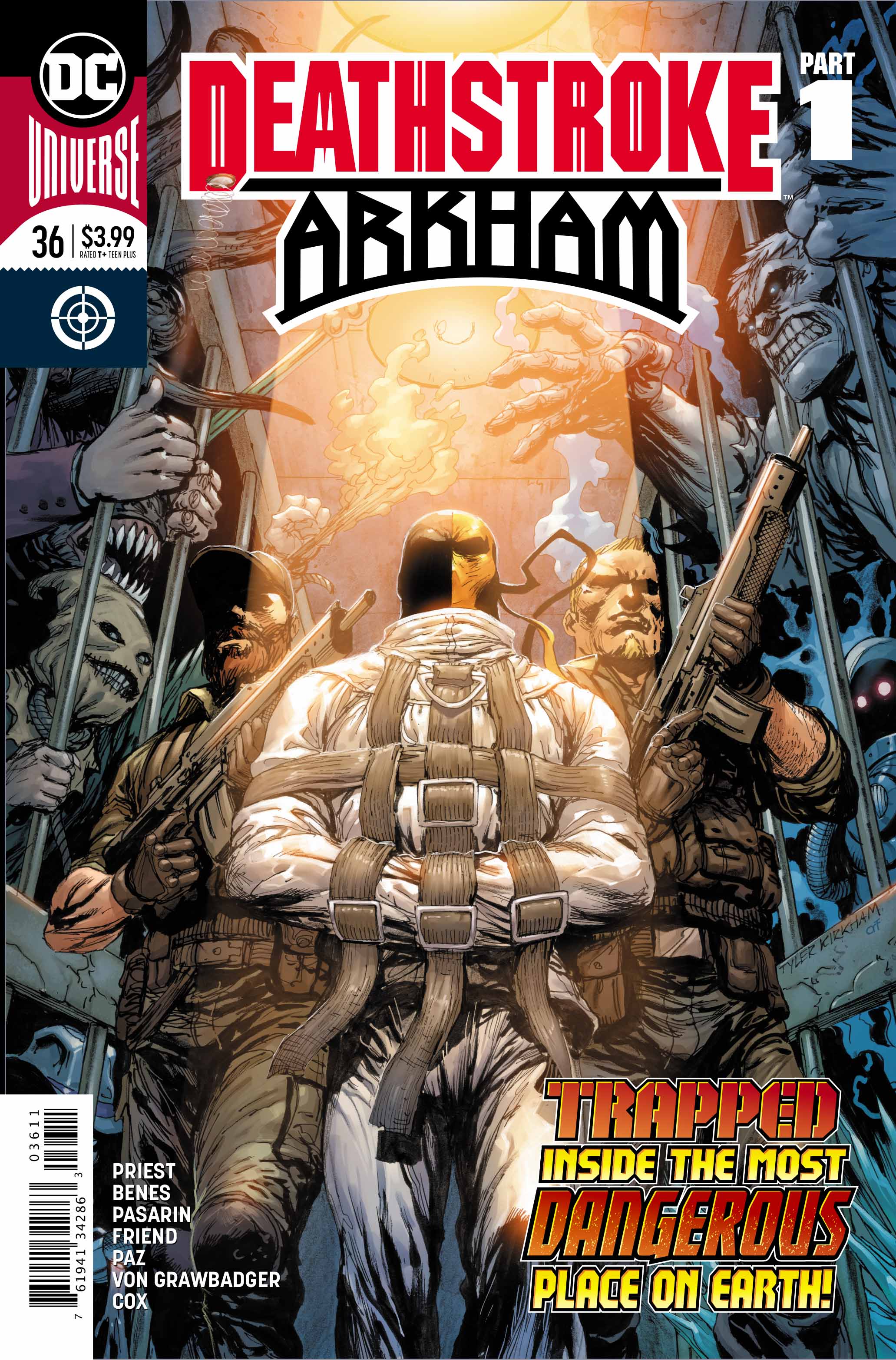 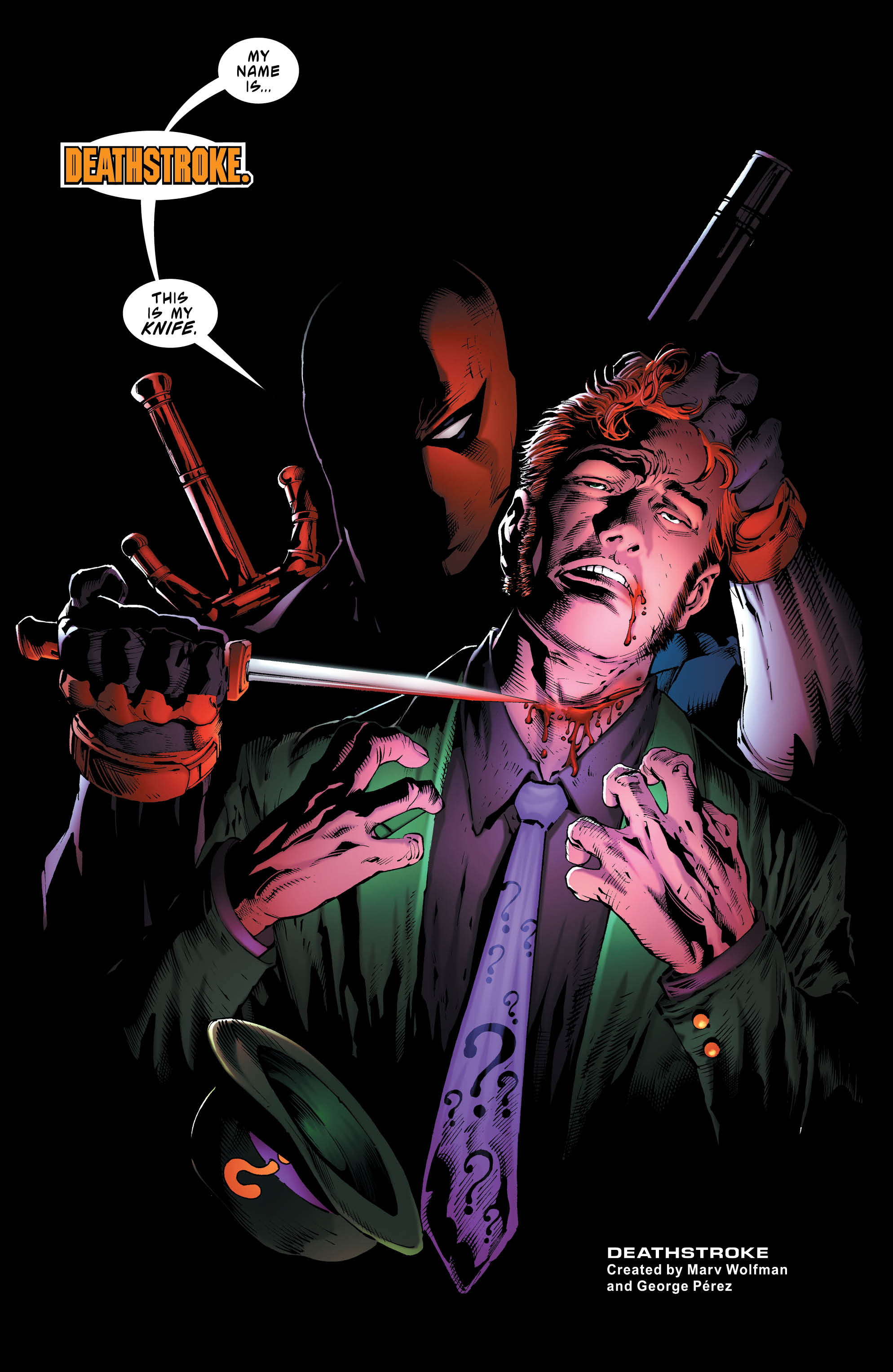 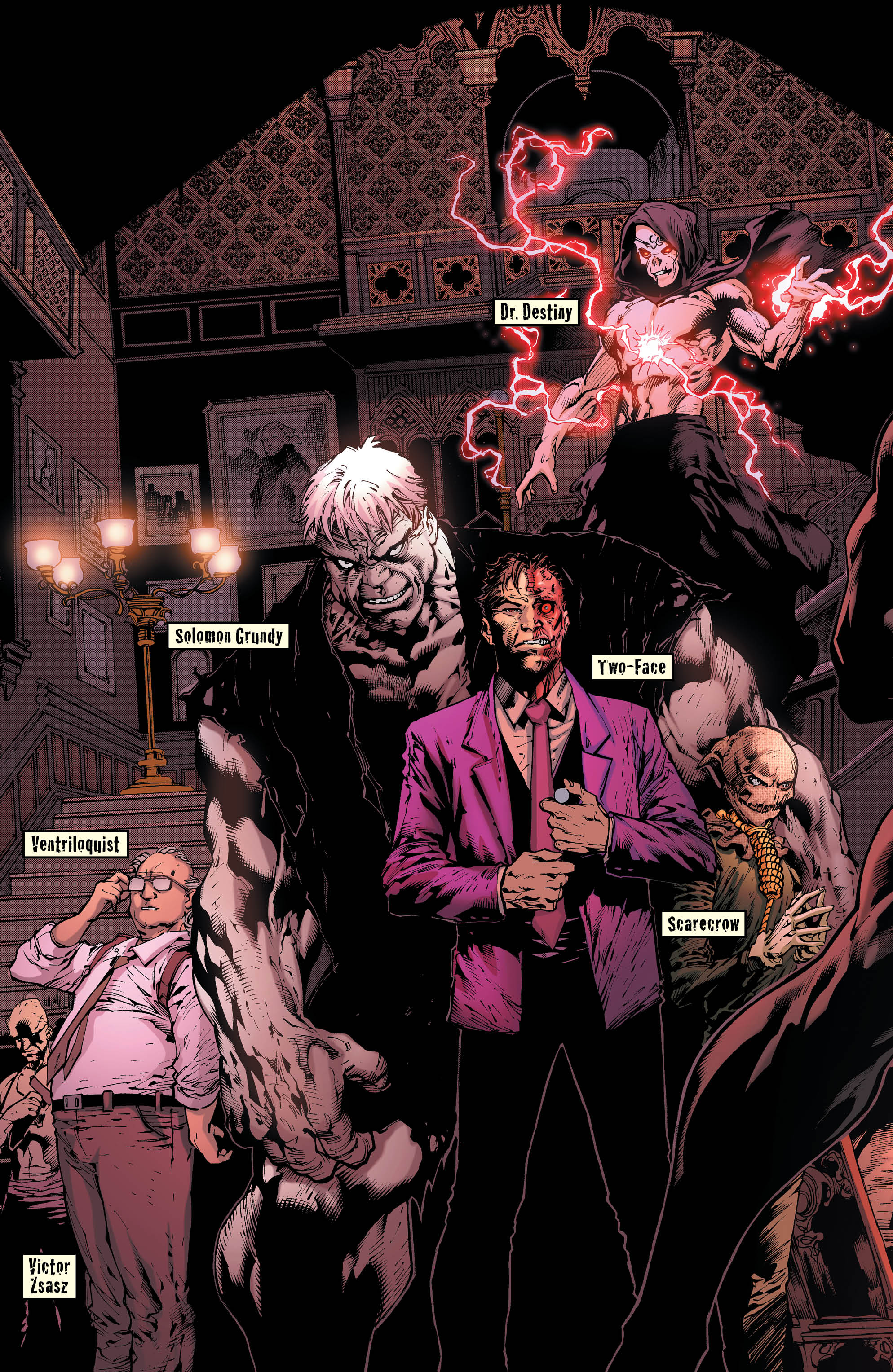 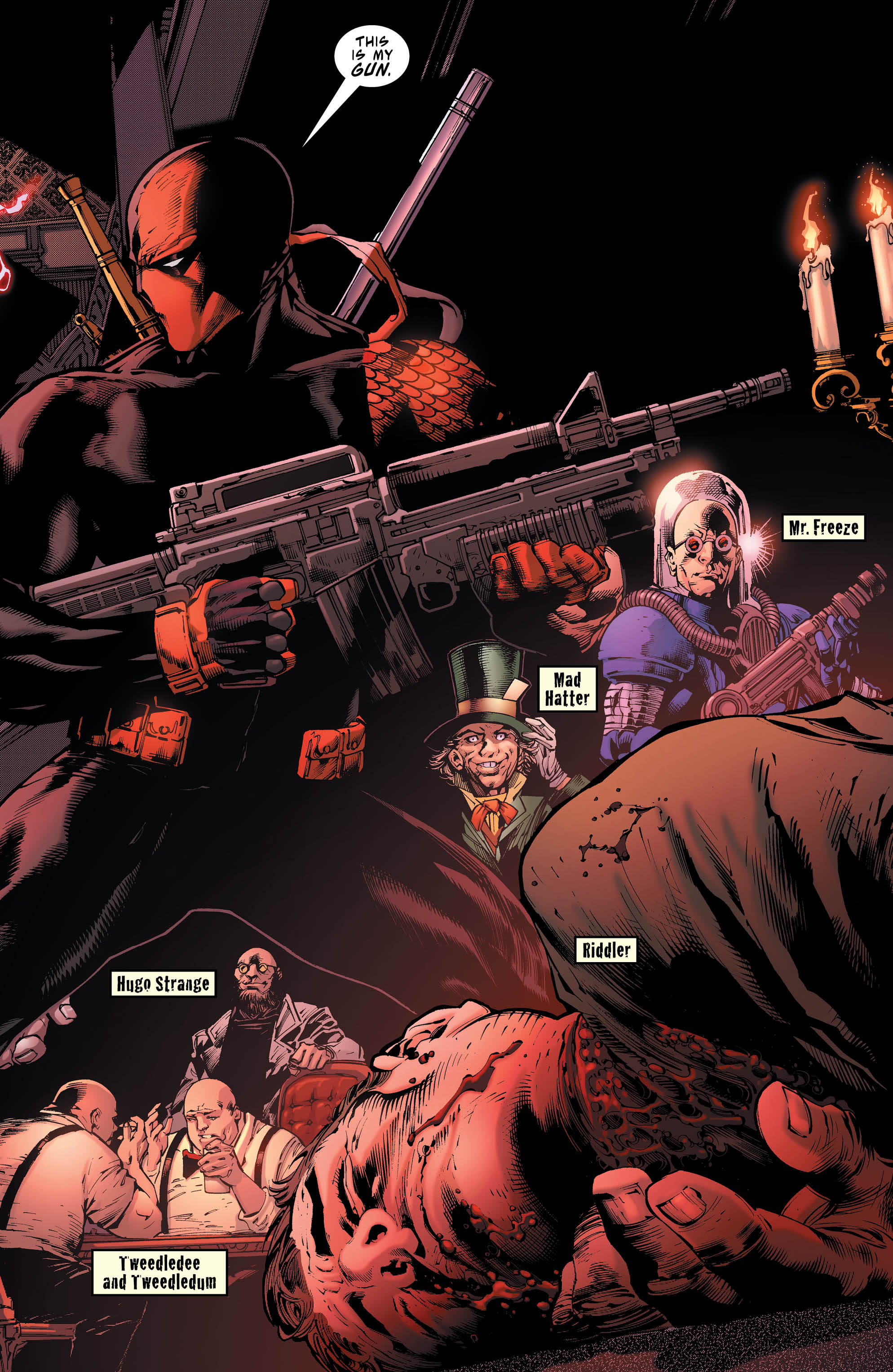 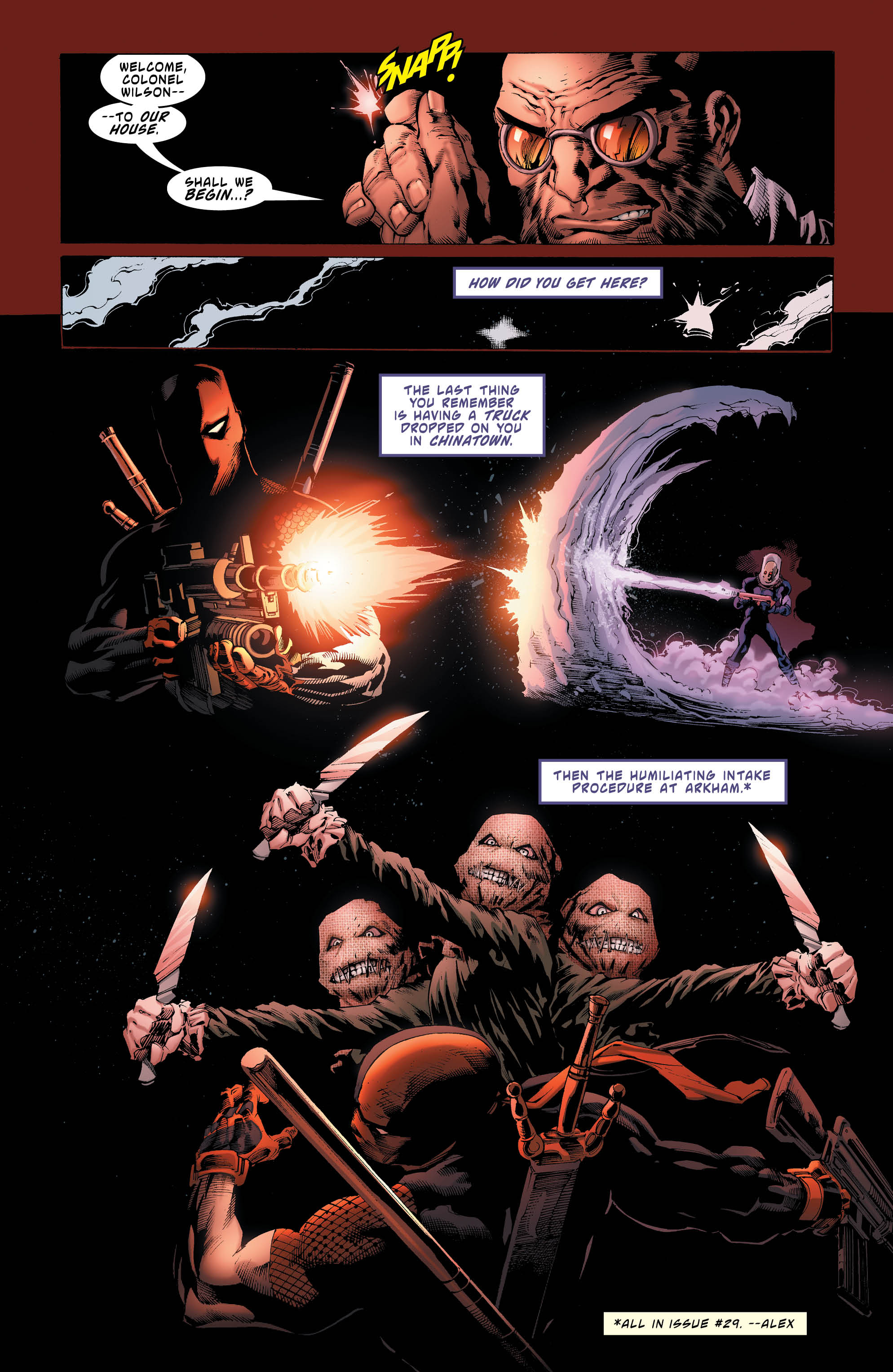 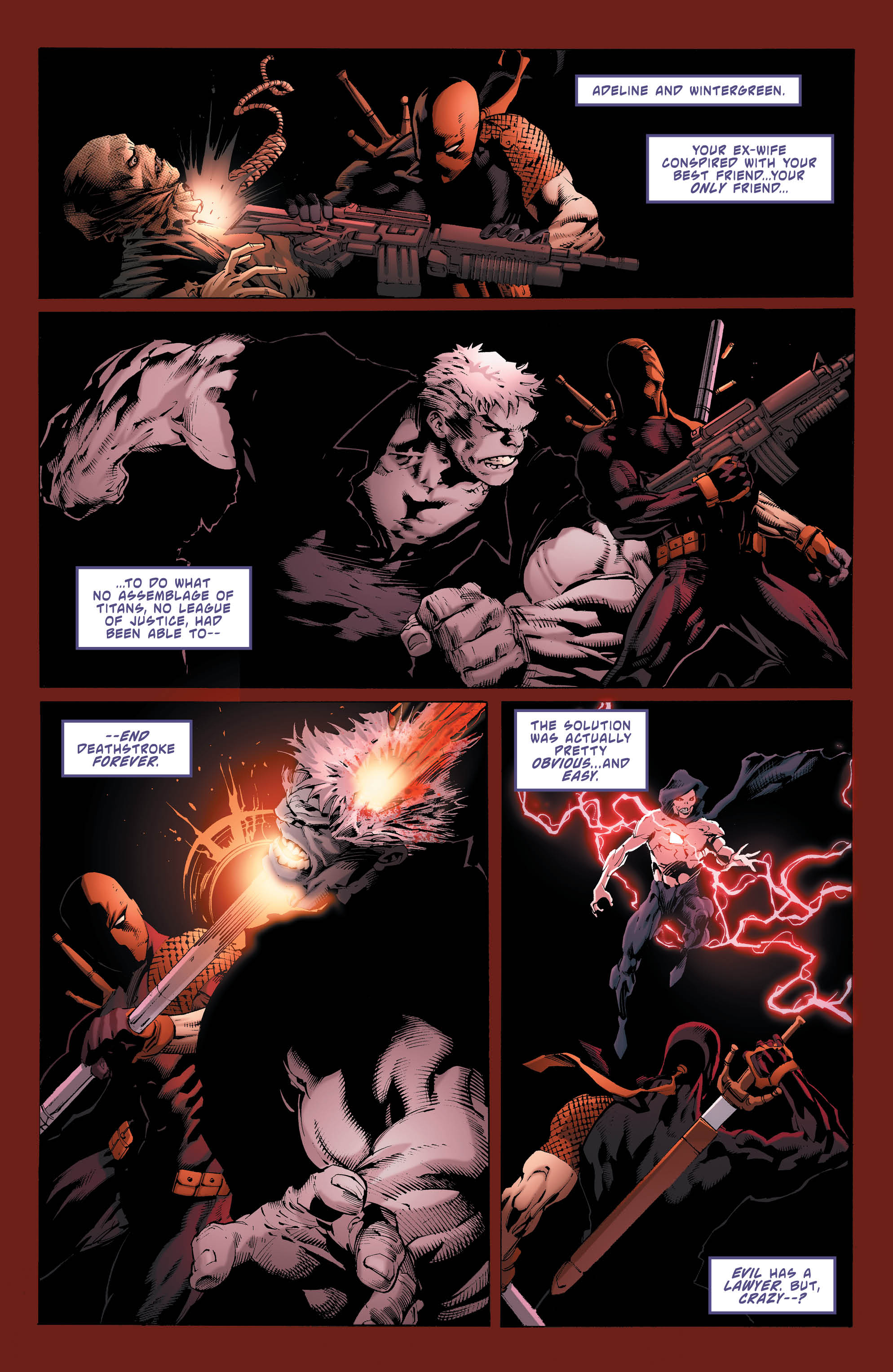 With regards to the issue’s pencils, Benes and Pasarin’s work is stunning. Their art truly captures the tone and tenor of the script, especially the opening dream sequence where Deathstroke squares off against the Bat-villains of Arkham. Shrouded in gloom and horror, Benes and Pasarin’s art highlights the horrifically violent and deranged nature of Arkham’s finest.

The artists also do a great job using backgrounds to signal to readers when something unusual is happening in the narrative. Priest’s scripts tend to be complex, requiring readers to pay close attention to high concept, complex storylines. While Priest is not “Easy” to read, Benes and Pasarin’s art make the task simpler. For example, it’s not immediately apparent that the issue opens up with Slade dreaming. However, black backgrounds coupled with ominous, graphic violence allow the reader to infer that these events aren’t actually happening. Another example of this use of background is the aforementioned VR scene. Here the panels are outlined in an eerie digital green glow, signaling that the characters are interacting with each other in cyberspace.

Deathstroke #36 is a fantastic example of just how intelligent this series is. Previous volumes of Deathstroke have been the comic equivalent of Hollywood action blockbusters, focusing on Slade slashing his way through various foes. Priest’s tenure on the title has been different, more cerebral in nature. With often oblique scripts, the writer takes on high concepts while making sophisticated social commentaries. This Arkham arc has piqued my interest, as it attempts to tackle the link between mental illness and criminality. And while Priest never shys away from such heavy topics, he nevertheless manages to frame these stories firmly in the bombastic world of the DCU.  The surprise ending of this issue is so delightfully outrageous that I am eagerly waiting to see what happens next. Check it out.