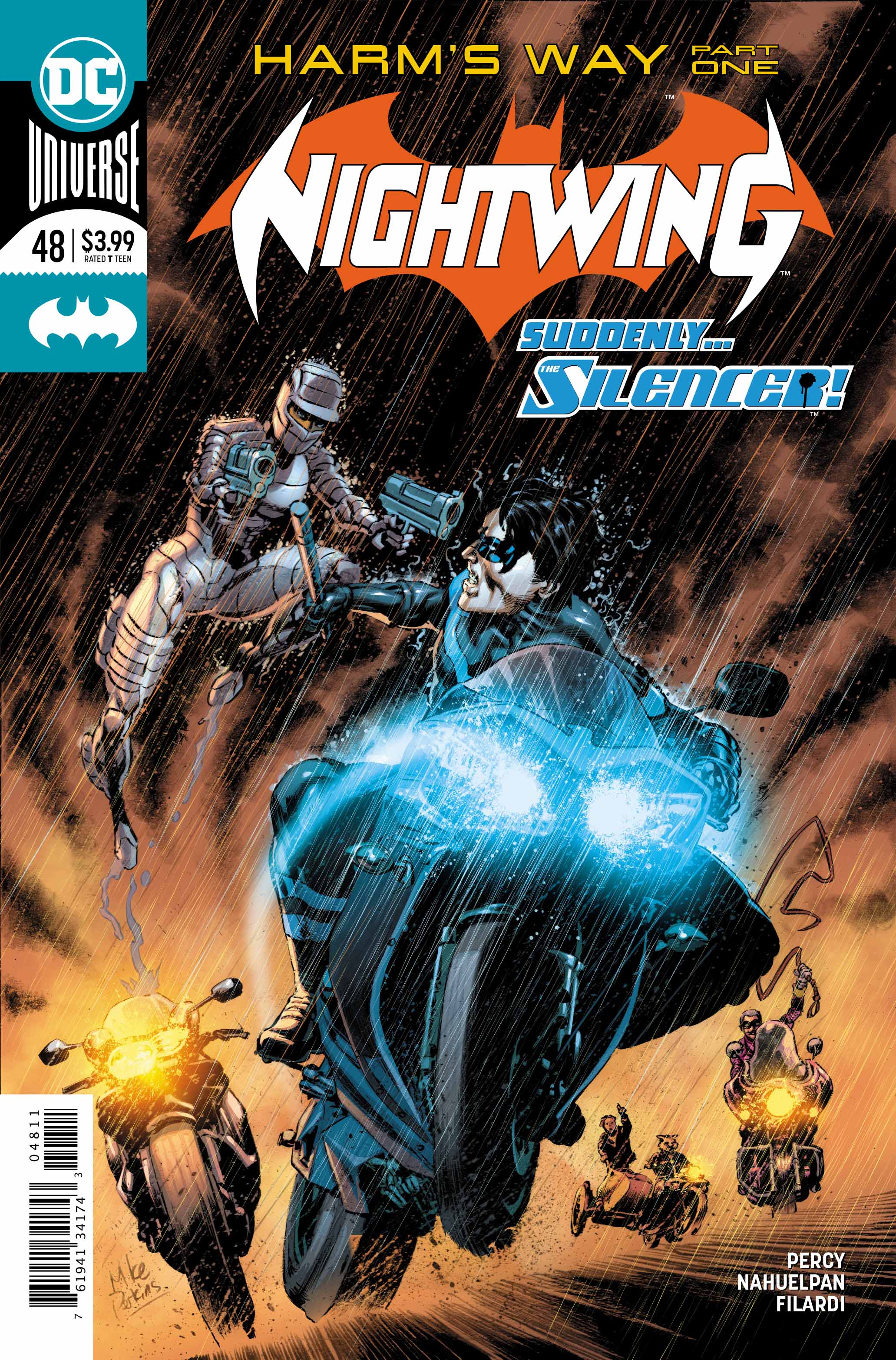 Taking a momentary break from fighting technology, Nightwing undertakes a race from hell. Dick takes a trip across the pond, to an island off the coast of Ireland. More specifically, Diobhail, translating to Harm. The isle of Harm is home to deadliest motorcycle race in the cosmos.

That’s right, heroes, villains, robots and aliens alike come from all walks of life to participate. So what is Nightwing doing there I hear you ask. Is he there to just blow off some steam? Taking a quick break from punching technology in the face?

No, he is there to save his friends. Like any good hero would be. 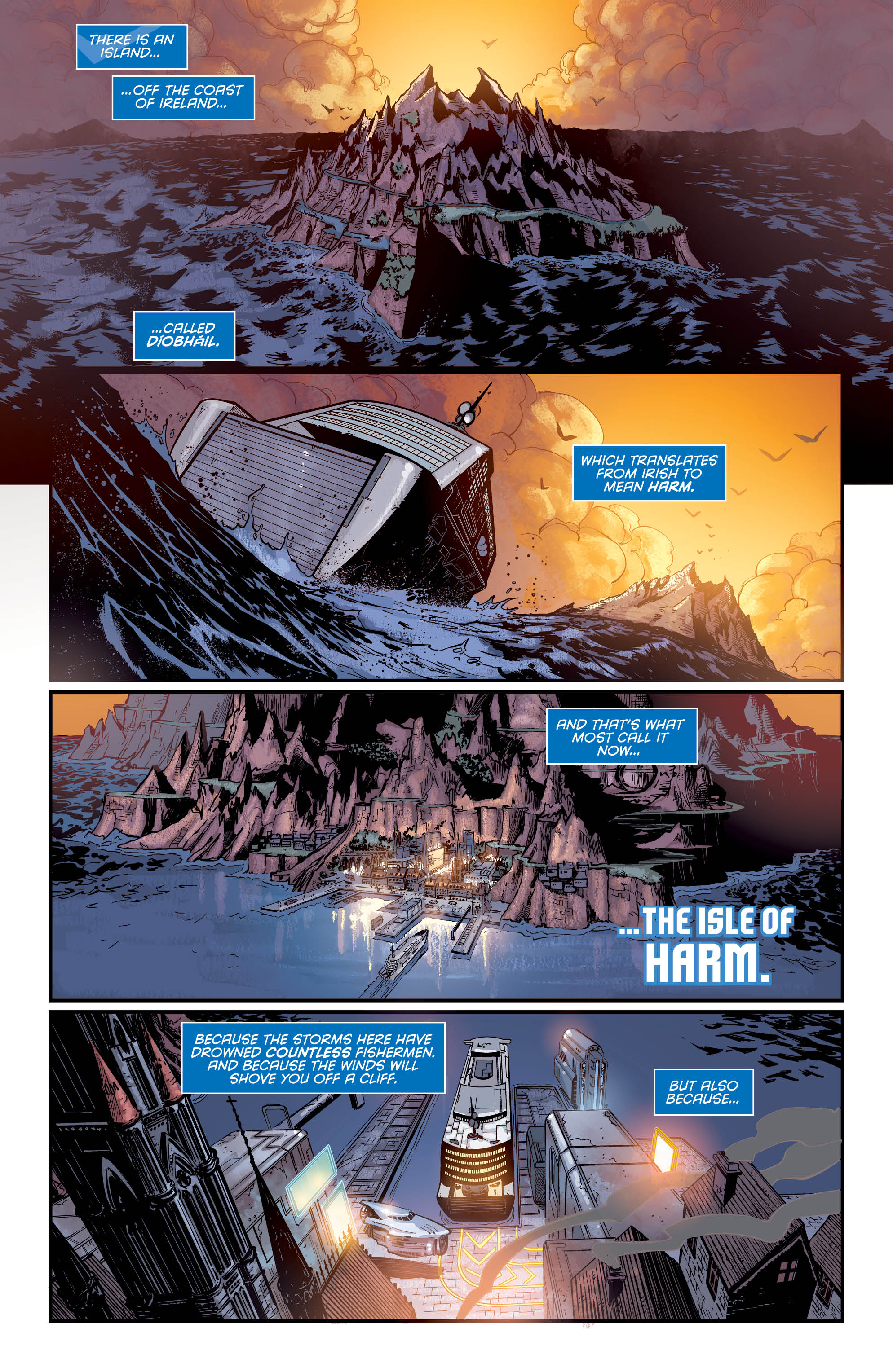 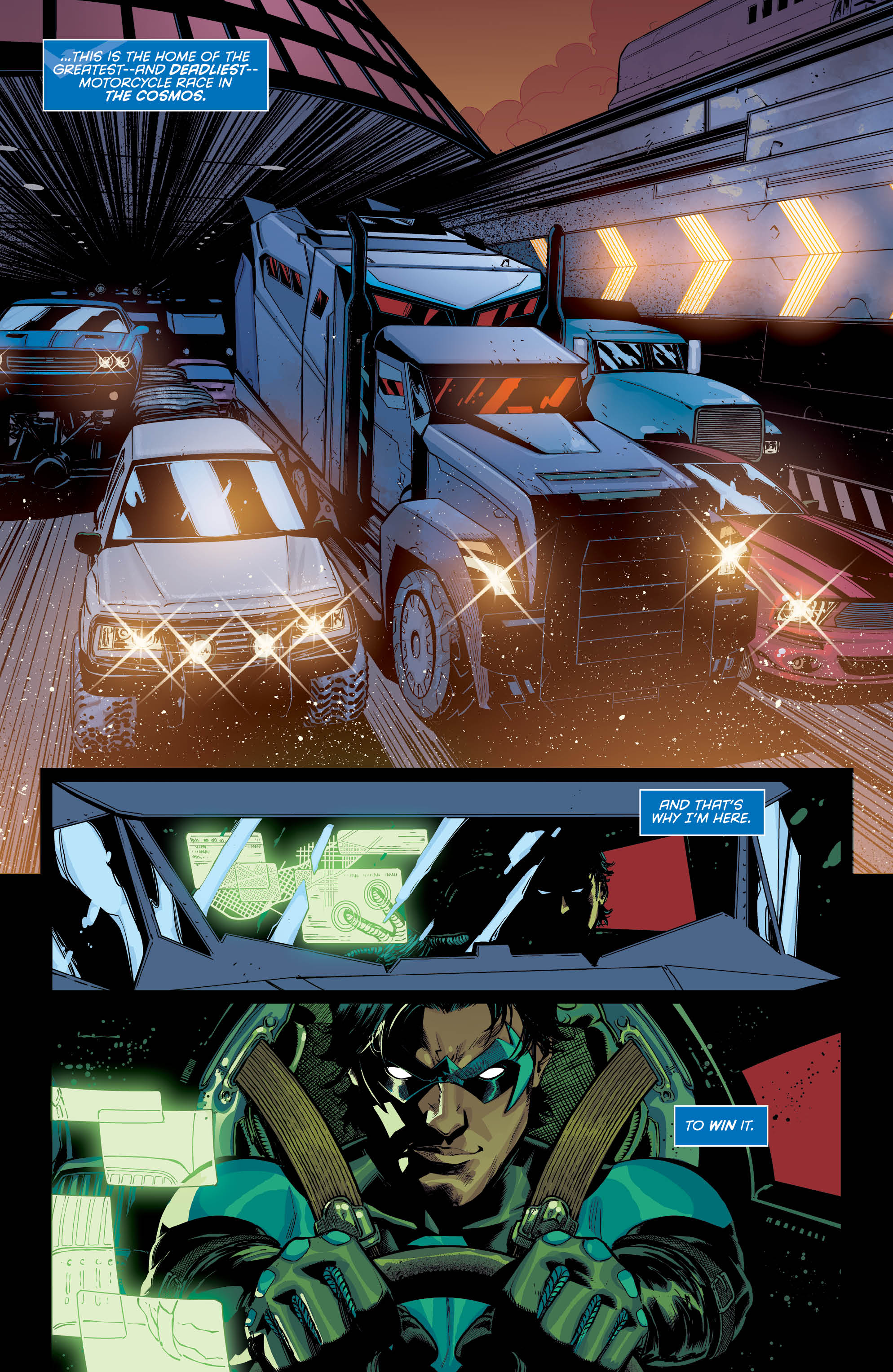 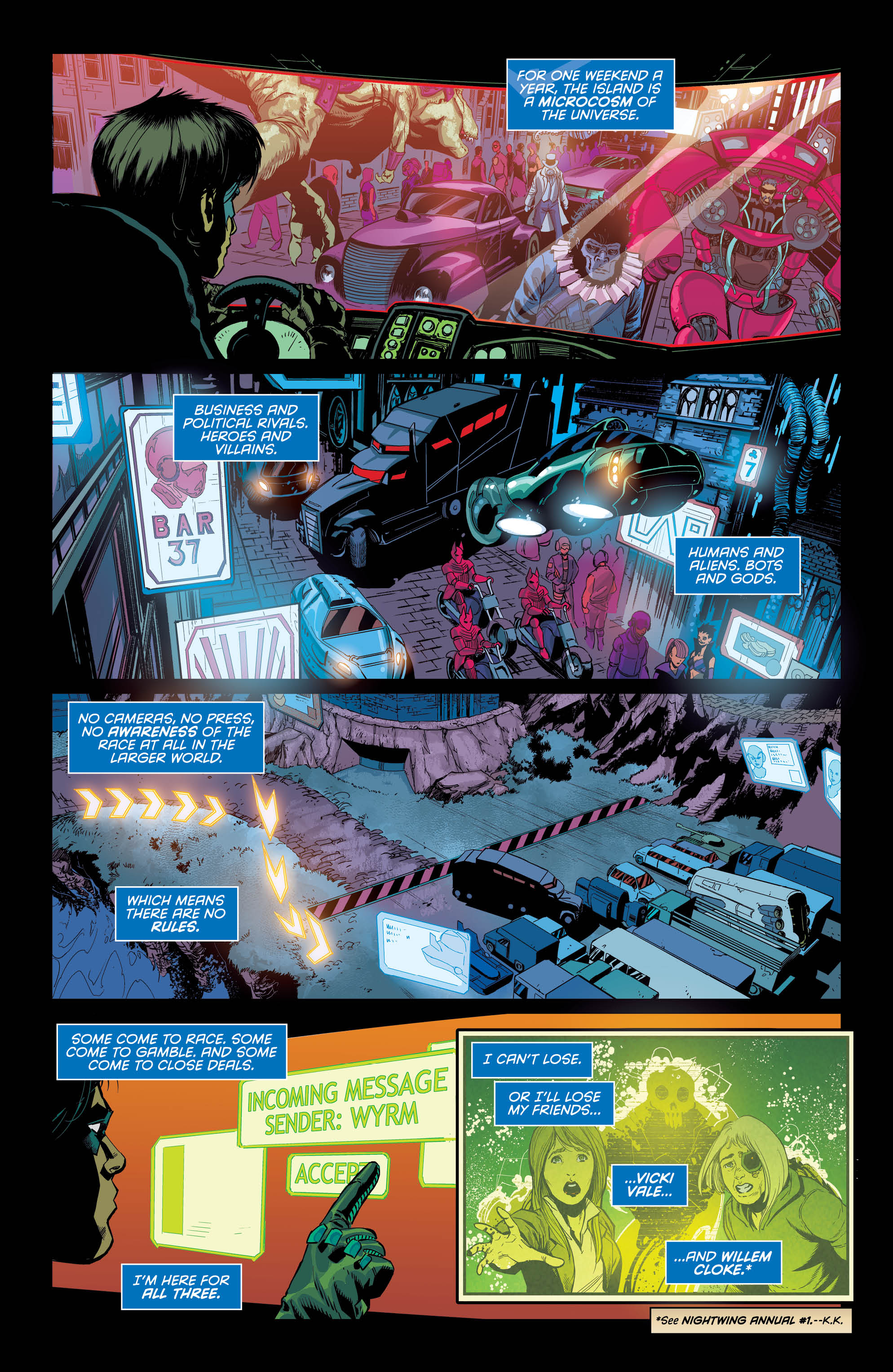 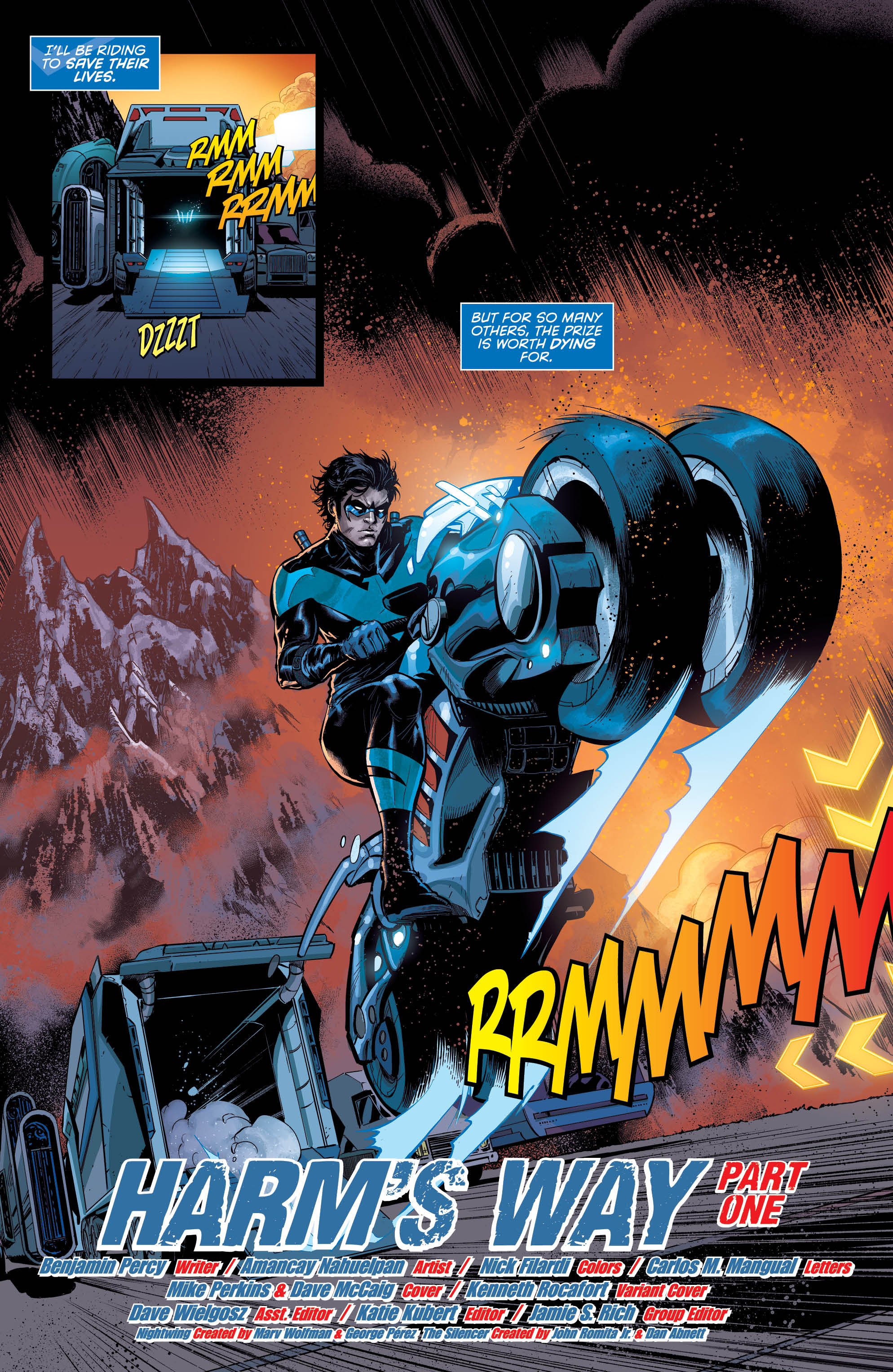 Nightwing’s not the only one who’s there racing for something. The winner of the race gets to ask the cosmos one question. Going up against a serious number of racers, all who will do anything they can to win. Including kill the competition!

I love when new characters are introduced, especially if they continue to play an ongoing role. I sincerely hope that The Silencer is such a character. From the small amount we see in this issue, they certainly seem like they could give Nightwing a run for his money. I’d love for Dick to get a rogue’s gallery akin to Batman’s.

I can see it now. Wyrm, The Silencer, and whoever else Percy decides to bring in. All teaming up to take out the nuisance that is Nightwing, only to be thwarted by the army of allies Dick has. What a fantastic series that would be!

The artwork, while not as good as it has been, is still fantastic. Amancay Nahuelpan really leans into the chaos and insanity of this motorcycle race, which works really well with the whole feel of the comic.

Benjamin Percy delivers yet another stellar issue, can this man do no wrong? While we’re no longer in Bludhaven and away from all the intrigue that resides there, Percy does a brilliant job of dropping just enough exposition to remind us what is happening.

Review: Adventures of the Super Sons #2