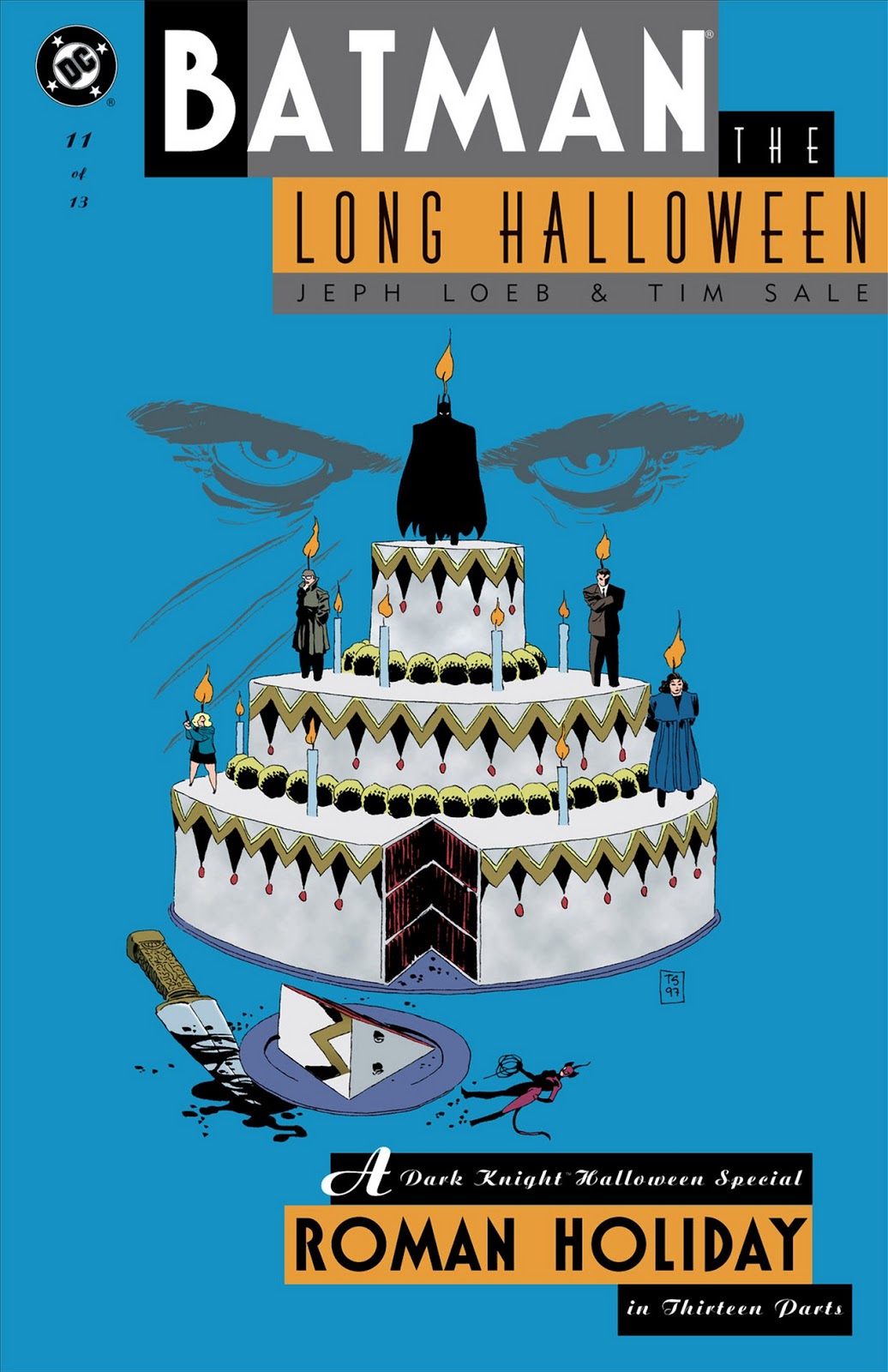 The previous issues have all been leading up to this, the moment where Harvey Dent becomes Two-Face. Jeph Loeb went through painstaking lengths to set up all of the pieces to bring us here. Gordon and Batman have been gunning for Falcone. The Holiday killer murdered Maroni’s father, motivating him to turn himself in. The year-long hunt for Holiday has been slowly turning the screws on Dent, causing him to lose it. Loeb’s meticulous pacing has finally paid off. 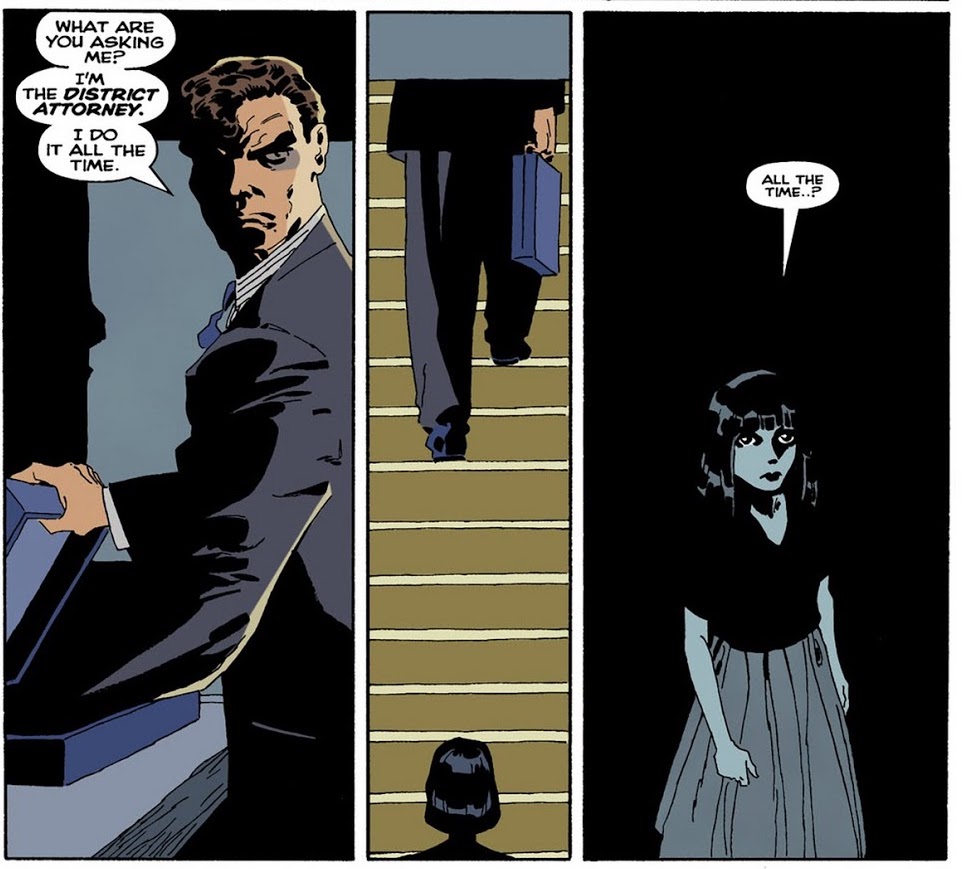 Probably the Worst Plot Thread in the Story

The issue does introduce a strange-and honestly confusing-plot thread too. When Batman interrogates the Riddler at the bar, he asks why the Holiday killer spared him. The implication is that Holiday worked for Falcone and purposefully spared the Riddler so Falcone can announce that he is trying to discover Holiday’s identity. 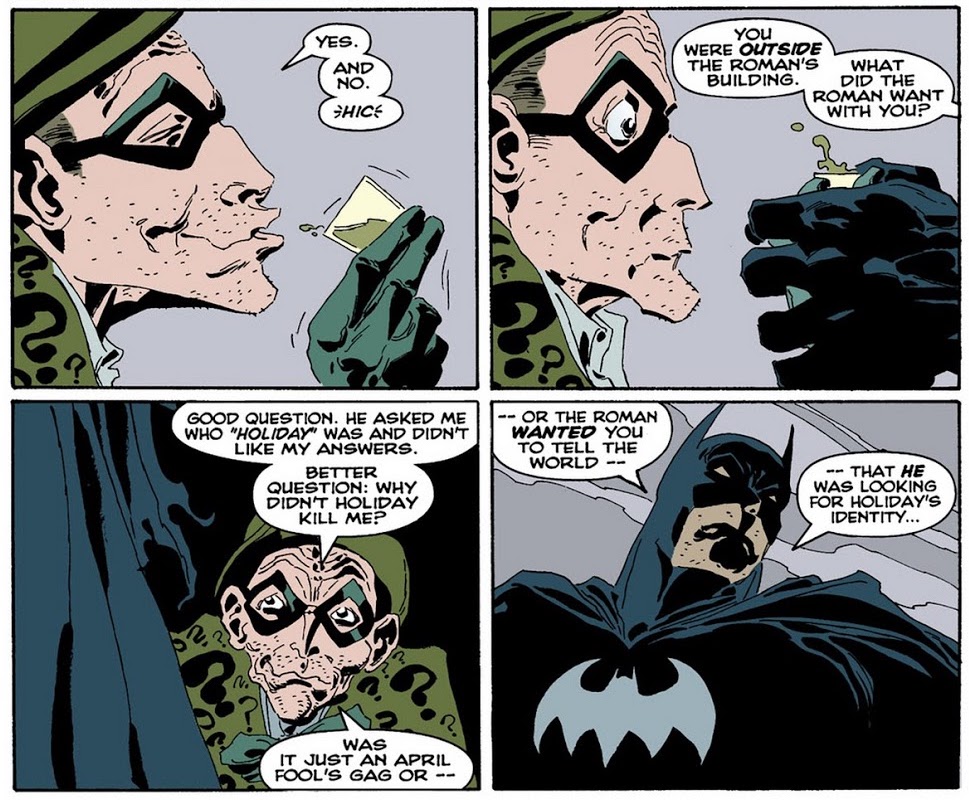 I am still not sure how Batman reached that conclusion.

Wait, what? This revelation does not add anything to the story. If anything, it actually hurts it. It not only seems random, but also directly contradicts later scenes in the story.  Truthfully, it is better if that whole bit is excised from the main plot.

‘The Godfather’ and Harvey Dent’s Transformation

Superfluous plot twists aside, Falcone also has a huge fight with his sister about employing costumed villains. Naturally, the overconfident Falcone believes he can control villains, but Carla Viti is not so sure. This little spat is brief, but touches on the whole ‘old crime versus new crime’ theme. 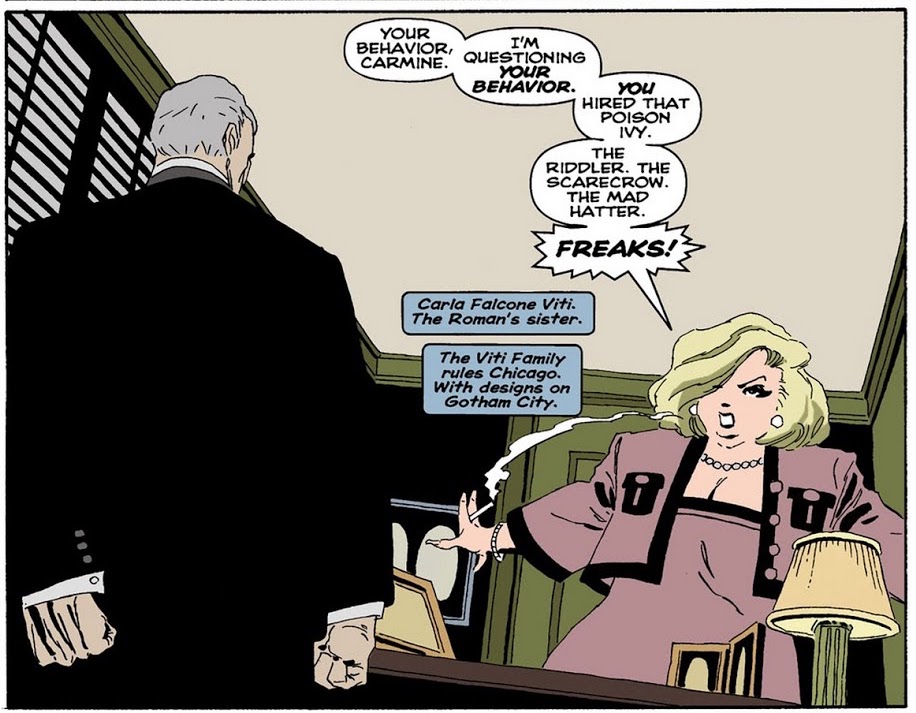 It is an increasingly prevalent motif as the story continues and really escalates later in Dark Victory. But for now, Sofia Gigante interrupts the bickering siblings with a surprise birthday party for Falcone.

Here is where Loeb wears his Godfather influence on his sleeve with the scene of juxtaposition of a happy event with an appalling event. While Falcone enjoys a joyful occasion, Dent’s court hearing with Maroni worsens. Dent ratchets up his questioning to Maroni. In turn, Maroni throws acid in Dent’s face. 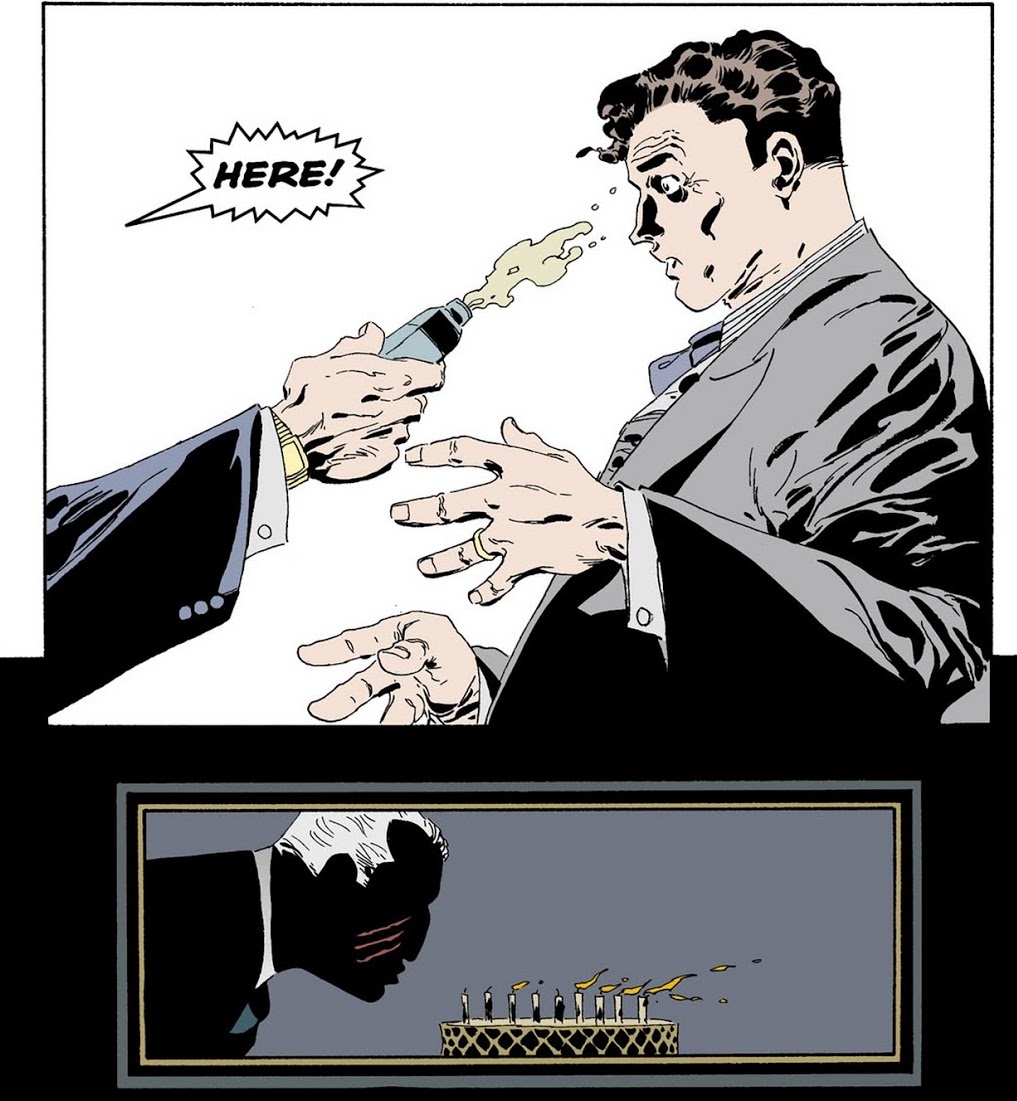 Tim Sale uses the juxtaposition of Falcone blowing out his candles and Dent getting hit with acid to great effect.

Similarly, in The Godfather, as Al Pacino’s Michael Corleone at his godchild’s christening, is intercut with his assassins murdering rival gang leaders.

Loeb slows the pace down to get the full effect of the horror of Dent’s injuries. Even the traditional structure of the comic book page is disrupted to represent Dent’s painful transition into Two-Face. The one page of Dent screaming in anguish as the panels crookedly fall off is a perfect example of the synergy between Loeb’s script and Tim Sale’s art. 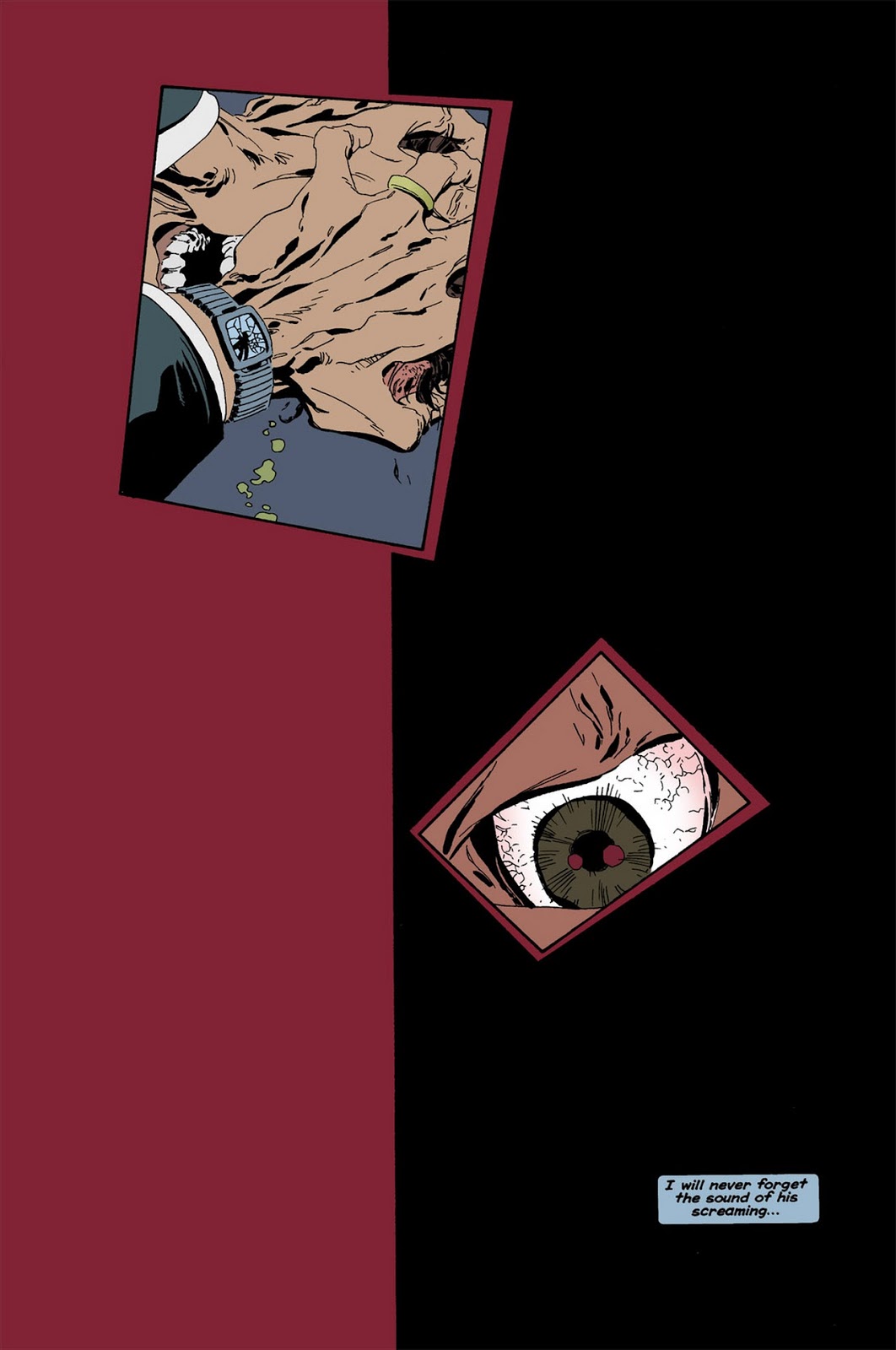 Dent’s anguish is captured perfectly by Sale’s art and composition.

With all the drama with Dent, one could easily forget that the Holiday killer is still out there, but Carla Viti remembers as she searches through the coroner’s files. However, that act proves to be fatal as the Holiday killer fatally shoots her in the back. Interestingly, this Holiday leaves no holiday-themed item at the crime scene.

That is because there are no major American holidays in August. Instead Loeb uses Falcone’s birthday as the holiday. Loeb has been cited for choosing August 2nd as the date, because that is also his own father’s birthday.

The payoff for this comic was fantastic. Readers experienced ten issues of foreshadowing and build-up to Dent’s turn to Two-Face. Now, the dominos begin to fall leaving Batman and Jim Gordon to pick up the pieces. Unfortunately, the issue also hosts that perplexing Riddler scene that is wholly unnecessary. This one scene is so bad, that for me it really drags down quality of the over-arching plot.