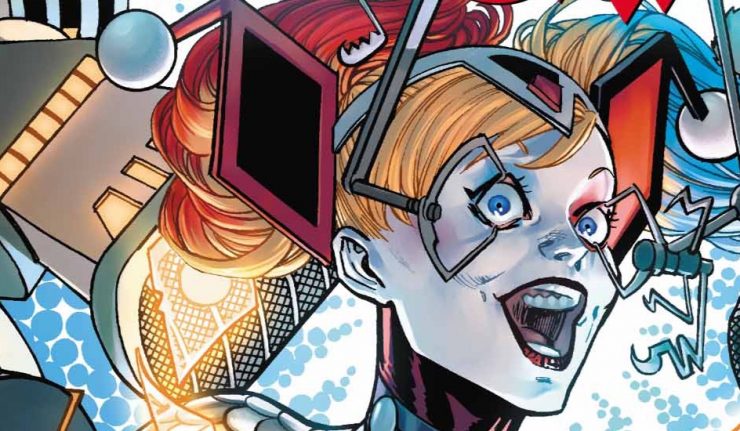 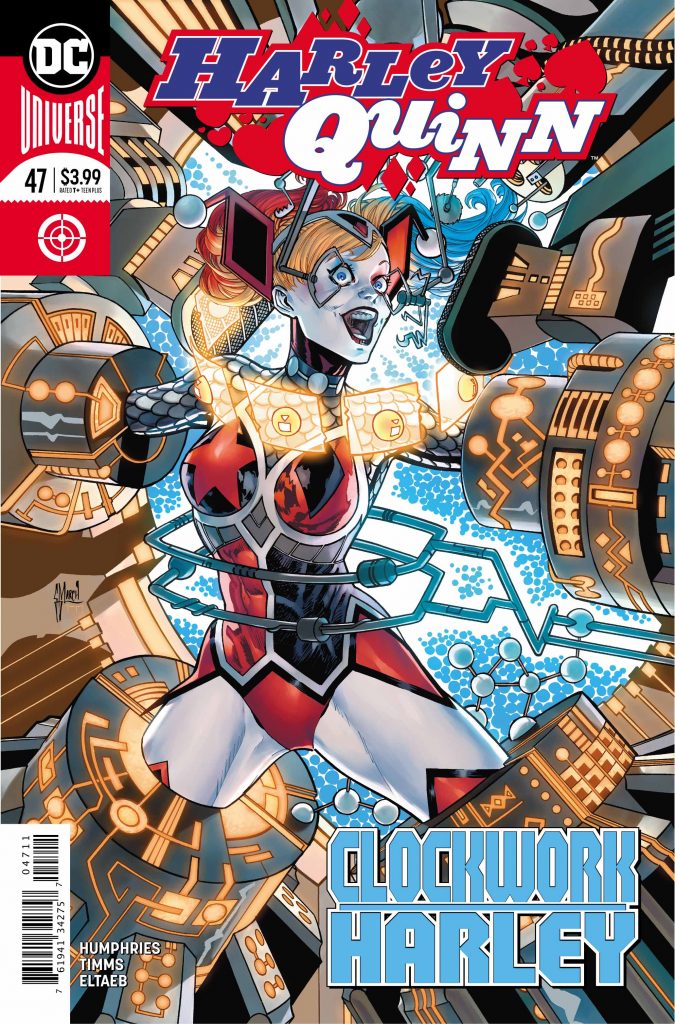 Sam Humphries and team wrap up a crisp, three-issue story arch with Harley Quinn #47. “Harley Quinn vs. Apokolips” saw the title character swept up in conflict with Granny Goodness. On Apokolips, many challenges and opportunities abound. There, as a Female Fury, Harley was endowed with magical powers, not to mention a super cool space hammer! However, doing Granny’s business forced introspection. Harley grappled with issues of self-worth and purpose. Was she happy wreaking havoc and enslaving Granny’s foes? Or, was she happier as a liberator?

Here, particularly with Petite Tina, Harley was depicted as a caring character. Harley’s kind and heroic side shined through. Sure, she still caused Granny fits, demolished foes, dropped one-liners, and, yes, Harley continued battling her multiple personalities, which were well depicted via a cosmic, portal-hoping phone booth of all places!

The complexity of Harley’s psyche was compelling, particularly when faced with twin bullying backdrops. Initially, a real-world bully on the beach raised Harley’s ire. Next, a cosmic bully, Granny Goodness, enslaved entire races in an effort to win the affections of Darkseid. In both instances, Harley’s character shined through. She protected the weak despite the considerable pain it caused her.

Occasionally, Harley broke the “Fourth wall.” She pointed out plot devices, alerted readers to connections with previous issues, and teased subsequent ones. Additionally, the writers called specific scenes from previous issues. All told, this wrapped the three-issue arch in a nice, tidy bow. 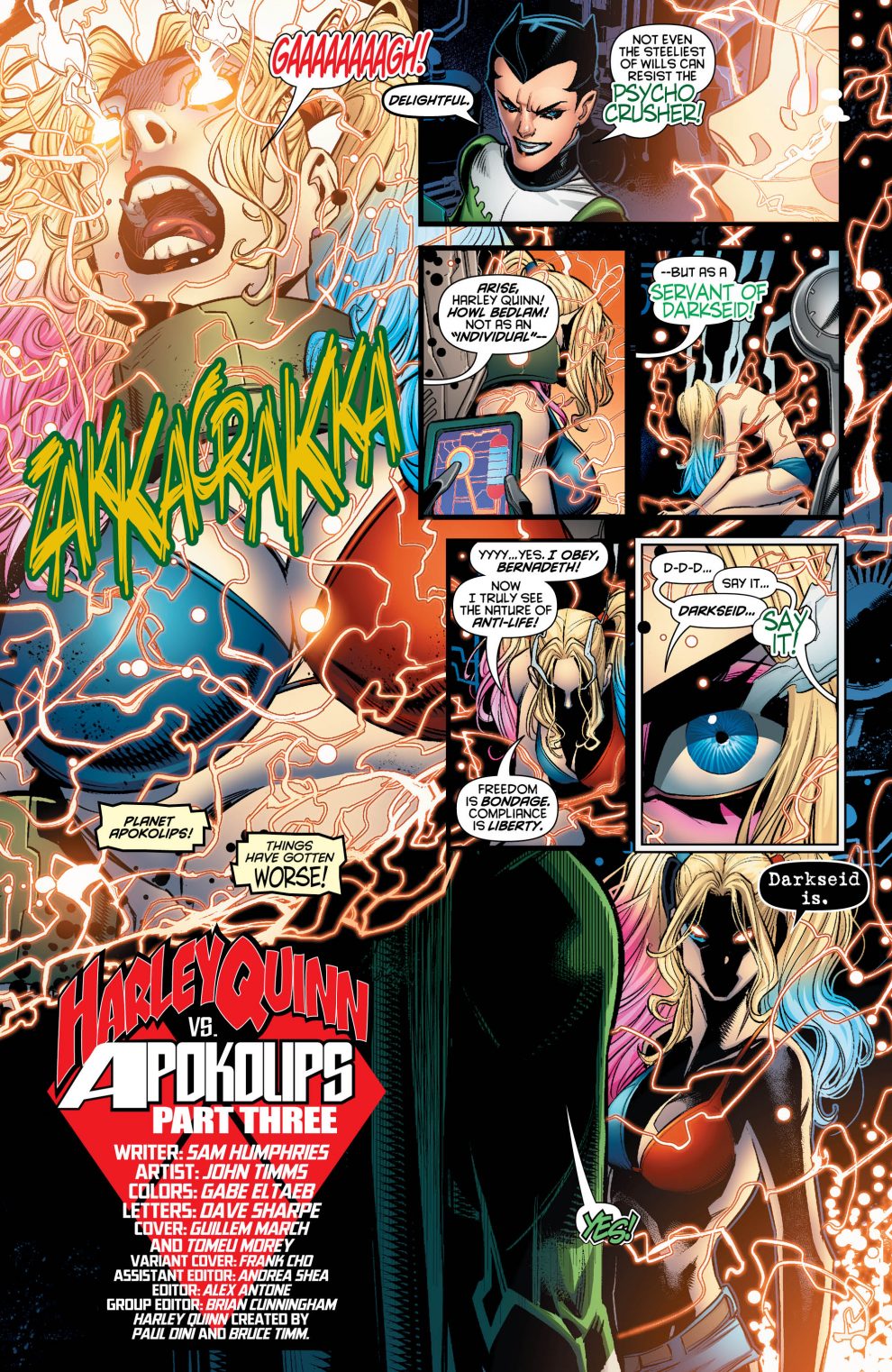 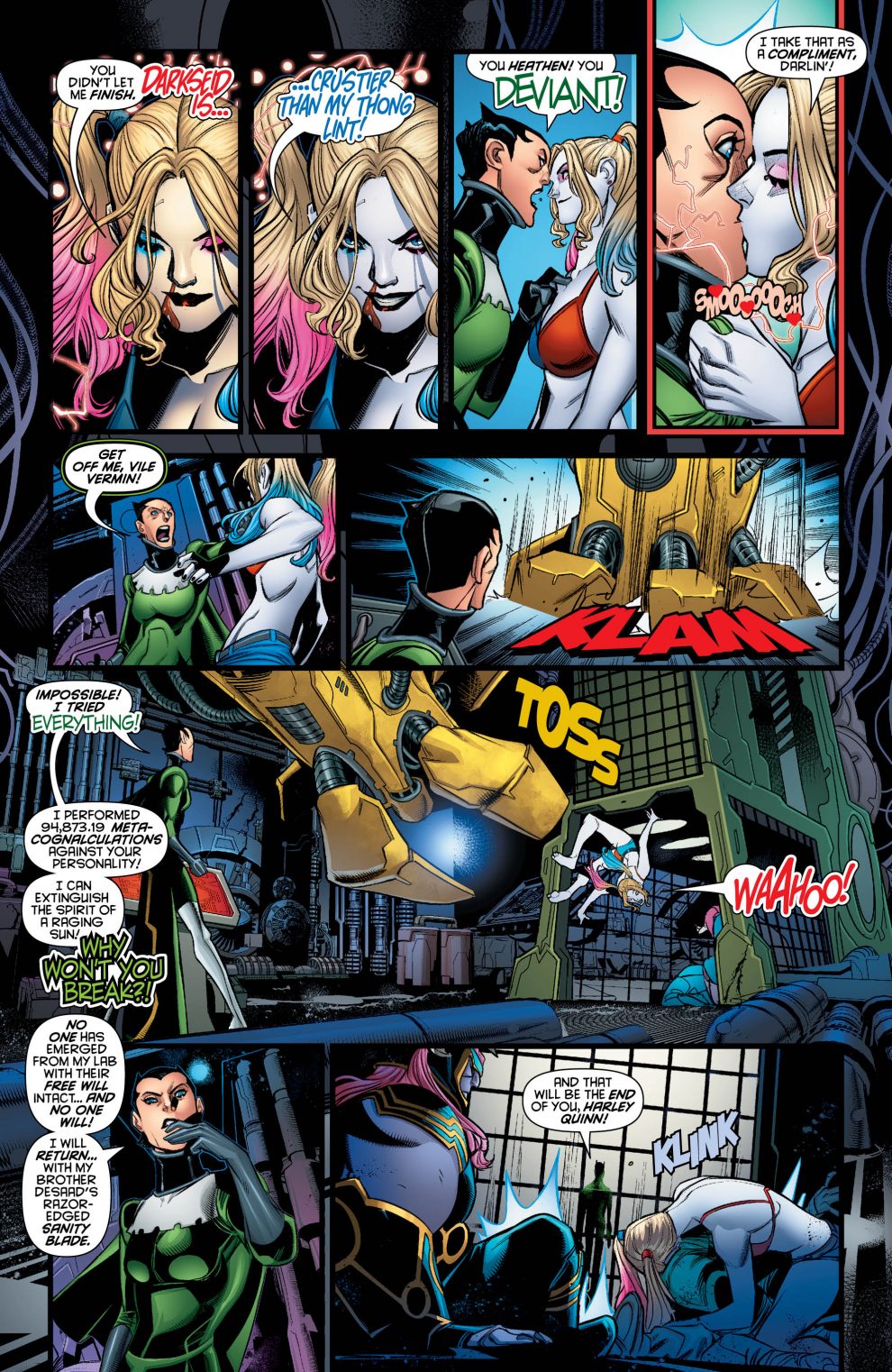 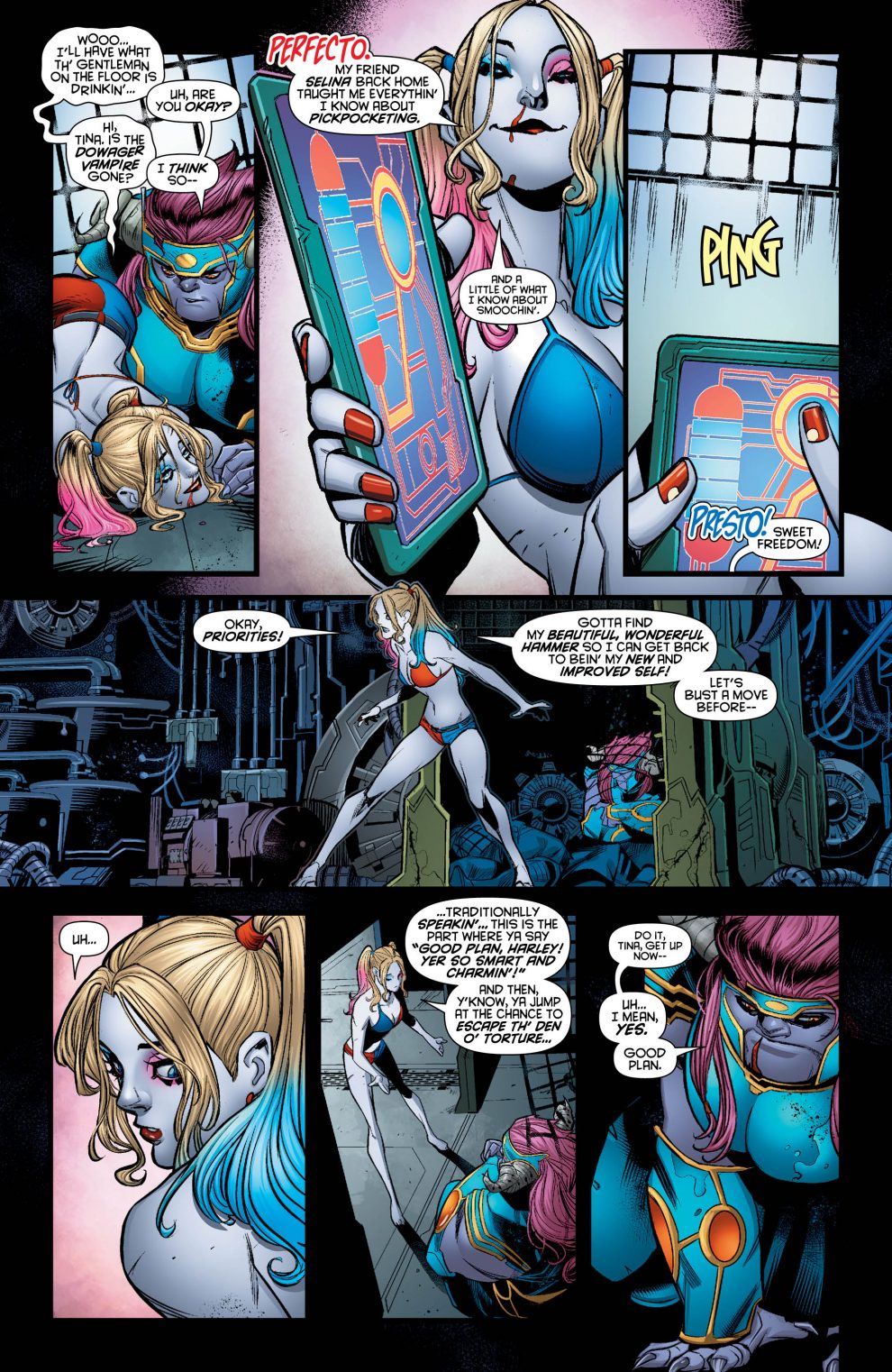 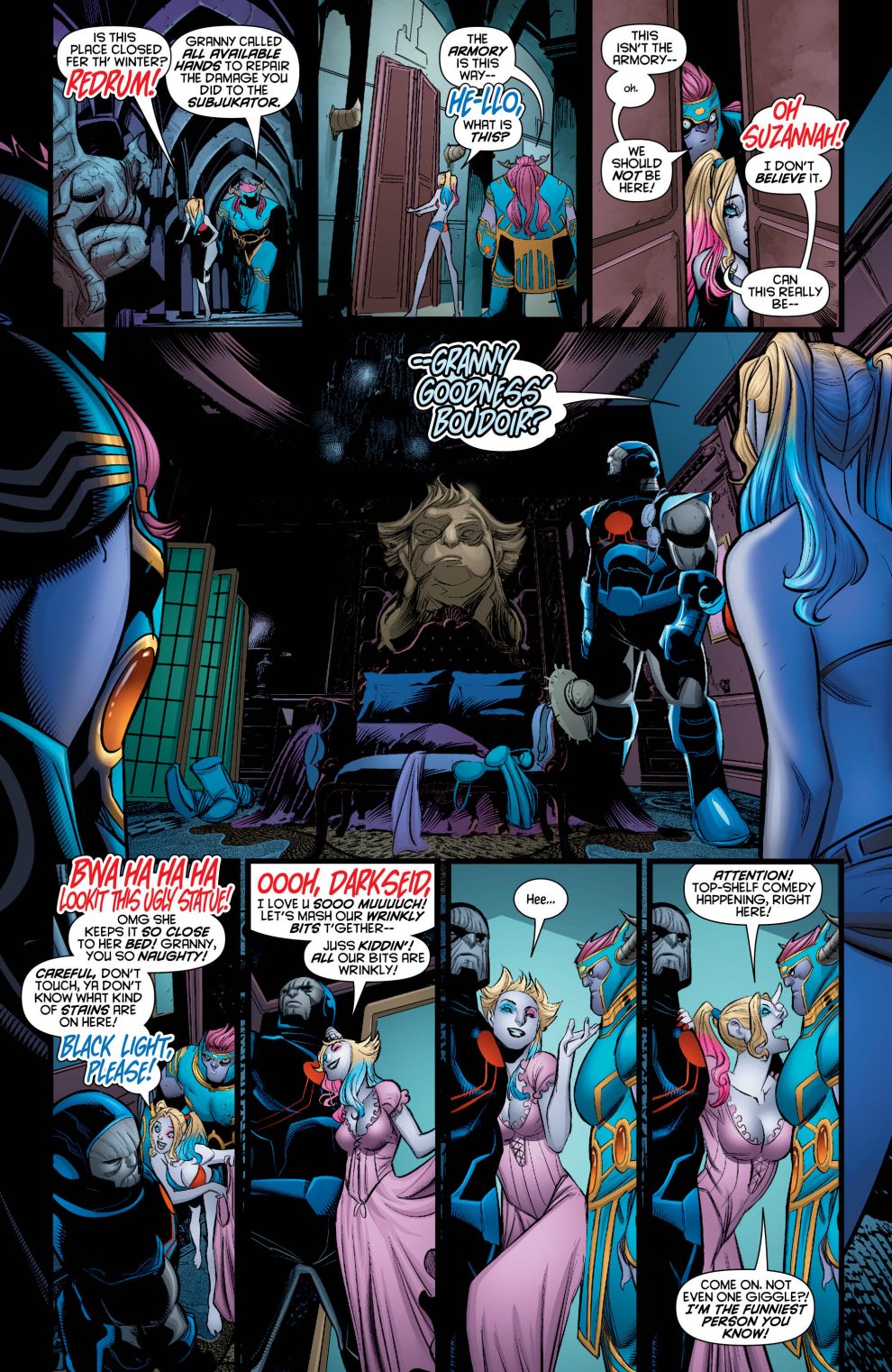 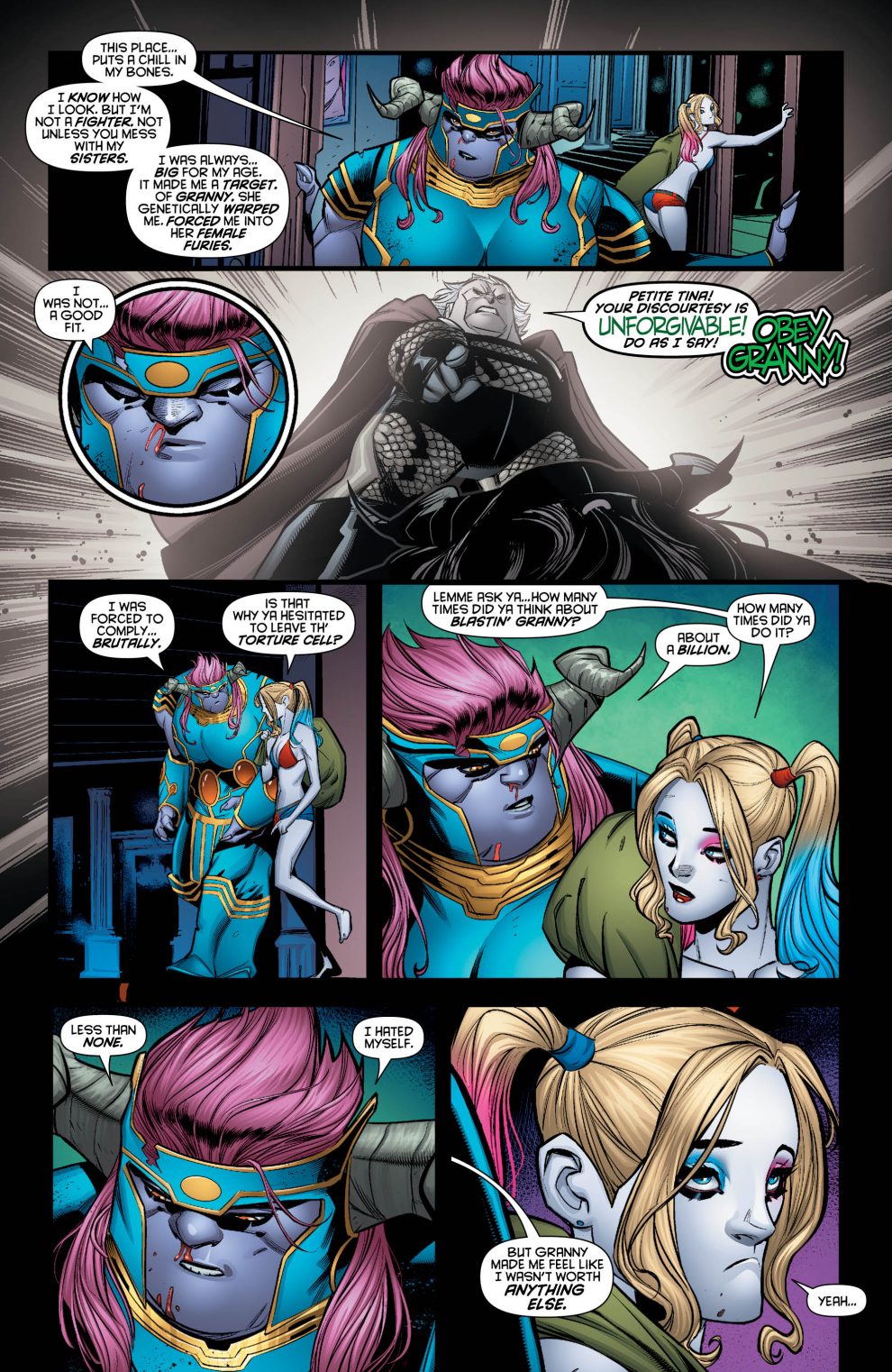 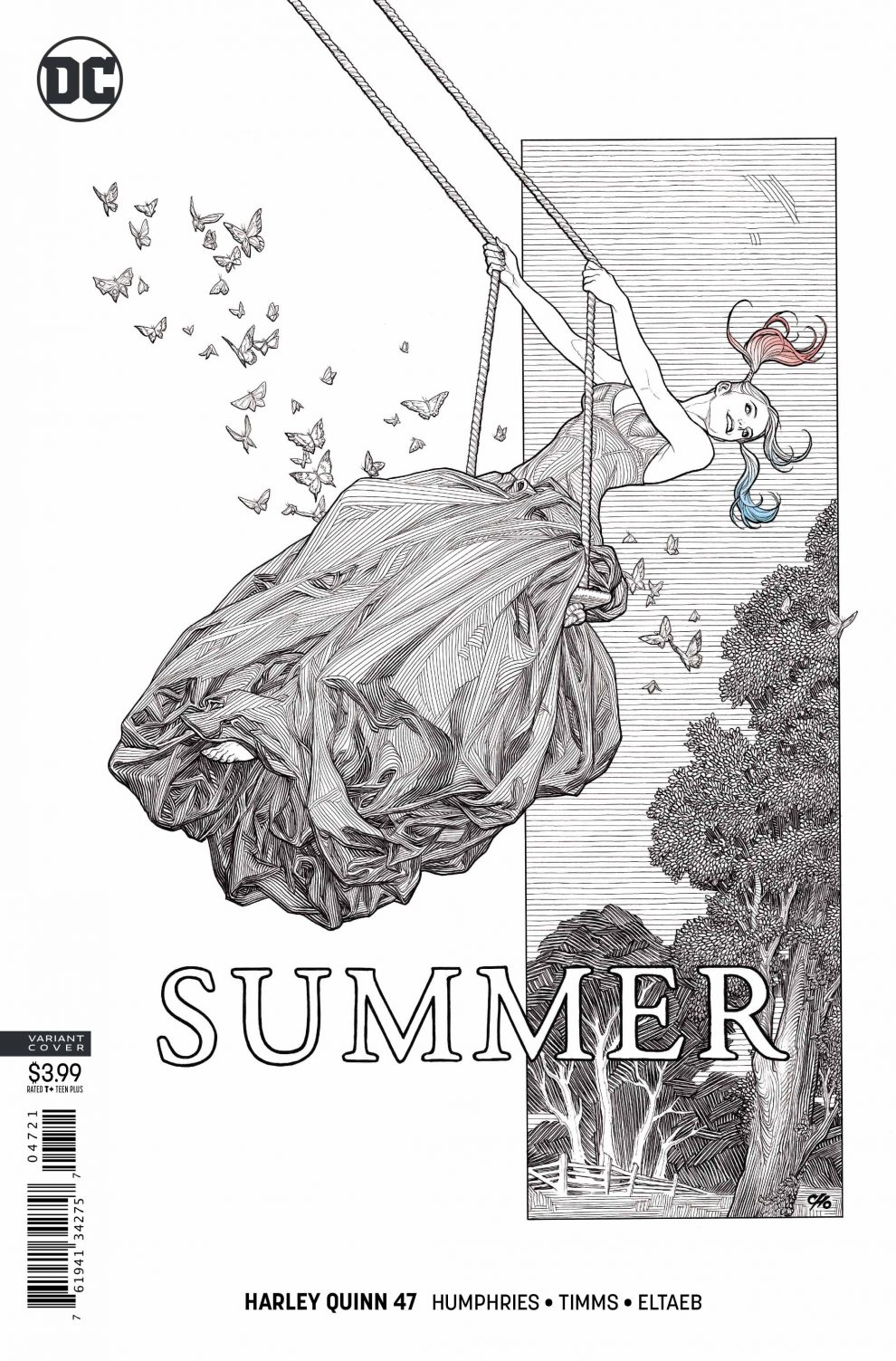 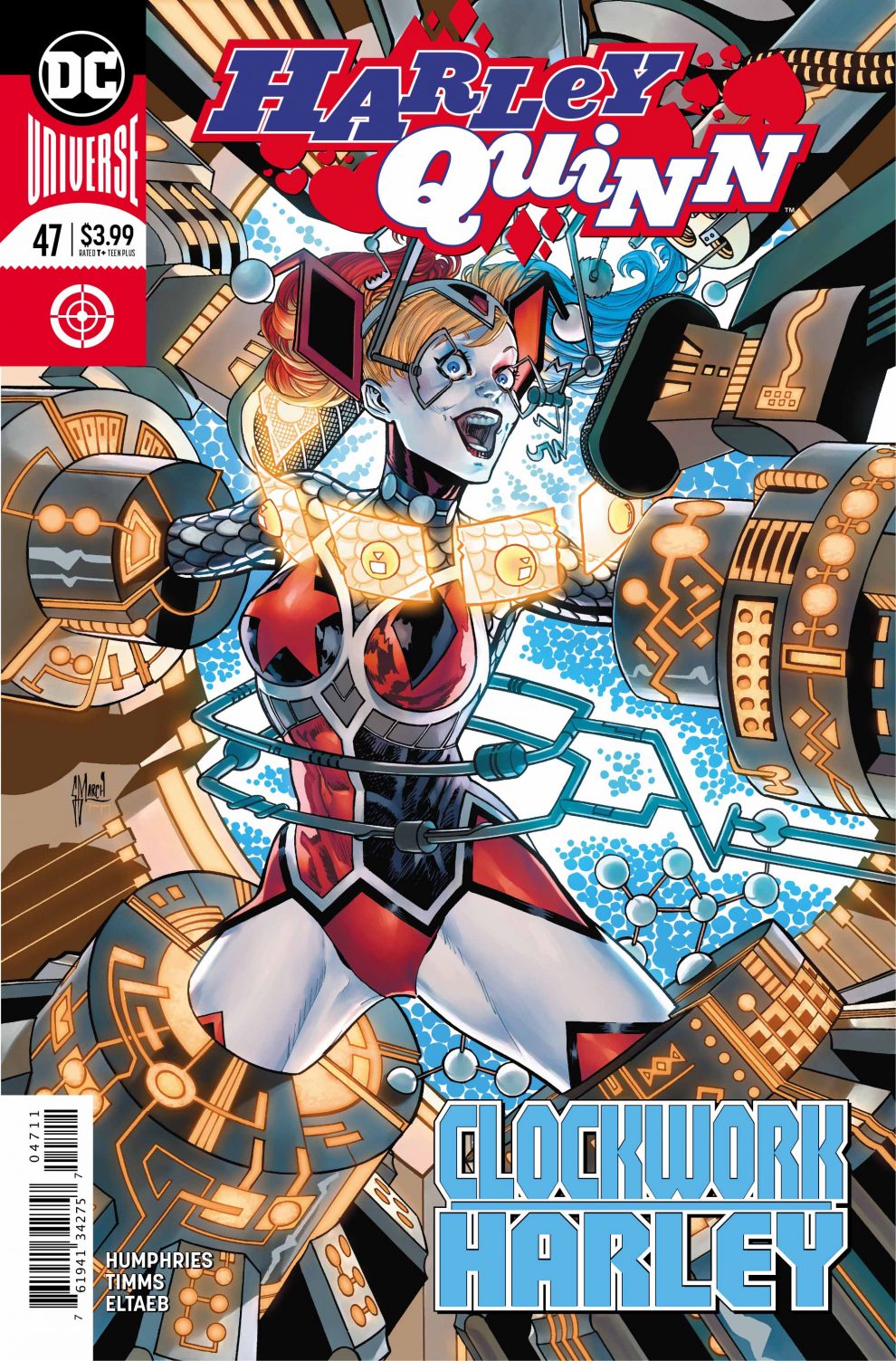 Artistically, the issue was well done. Not surprisingly, the variety of fonts and colors used in Dave Sharpe’s lettering were fantastic. The pinks and blues, reds and greens pop against the black background of the panels. Sepia depicted flashback scenes. Additionally, a washed-out panel depicted a short story of one of Harley’s romanticized “memories” of The Joker. Furthermore, the panel alerted readers to the way in which Harley’s mind distorts reality. She attached very real feelings to manufactured memories. Realistically, these events didn’t occur, yet her fractured mind yielded an empathetic response. Simultaneously, Harley was sad and endearing.

Sam Humphries and crew wrapped up the “Harley Quinn vs. Apokolips” storyline nicely in Harley Quinn #47. Against the backdrop of Apokolips, Harley’s character develops nicely. Here, readers were privy to the inner workings of Harley’s mania; a look into the damaged, traumatized, and yet still brilliant mind of a psychiatrist turned criminal turned hero. The writing was witty and whimsical while still conveying a sense of importance. Harley seemed to develop a sense of self and a path forward. Additionally, Humphries presents moral dilemmas well despite far-fetched scenarios. Yet, Harley proved more than ready to make the right choices. It appears the next issue will begin a far more grounded tale, which this reader looks forward to. 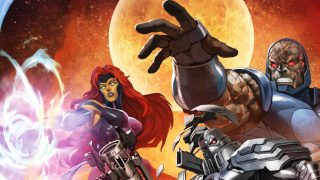