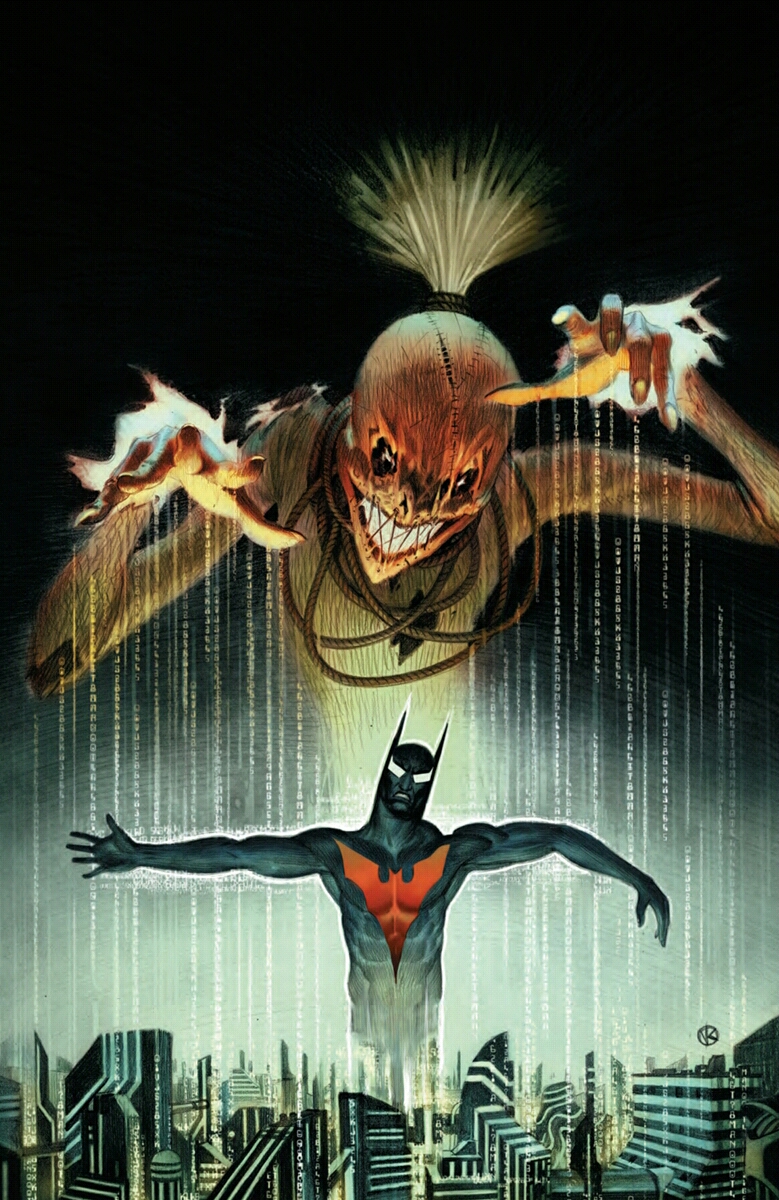 I hate spoilers, but if the premise hasn’t given the game away, then this issue’s cover sure has. Yes folks, you guessed it… The Scarecrow is back!

Batman has always been regarded throughout the criminal underworld as a figure of fear. In recent months, though, even the innocent have been terrified of him. Anyone directly looking at Batman would no longer see a hero, but a slavering Bat-Demon. Someone has been manipulating the fears of the citizens of Gotham, and last issue we saw Terry attacked by the very people he’s sworn to protect. To make matters worse, the mob was led by none other than Barbara Gordon, commissioner of the GCPD.

Dan Jurgens is a clever, clever man. Since this story arc began in Batman Beyond #20 he’s lulled me into a false sense of security. We know Bruce Wayne’s old, but still kicking. In this story Mr. Jurgens aslo brought back an aged Jack (The Creeper) Ryder. In my infinite (lack of) wisdom, I thought that this meant the imminent return of Jonathan Crane. I mean… come on! Manipulating the fears of Gotham’s citizens? This plan has Scarecrow written all over it!

Like I said, though, Mr. Jurgens is clever. This Scarecrow is something completely new, and that is where I will shut up. If you want to know more about the Neo-Scarecrow then BUY THIS COMIC! I was all proud of myself, though a little irritated at the thought of yet another returning baddie from Bruce Wayne’s past. I should’ve had more faith in the creative talents of this veteran writer.

In Dan we trust. 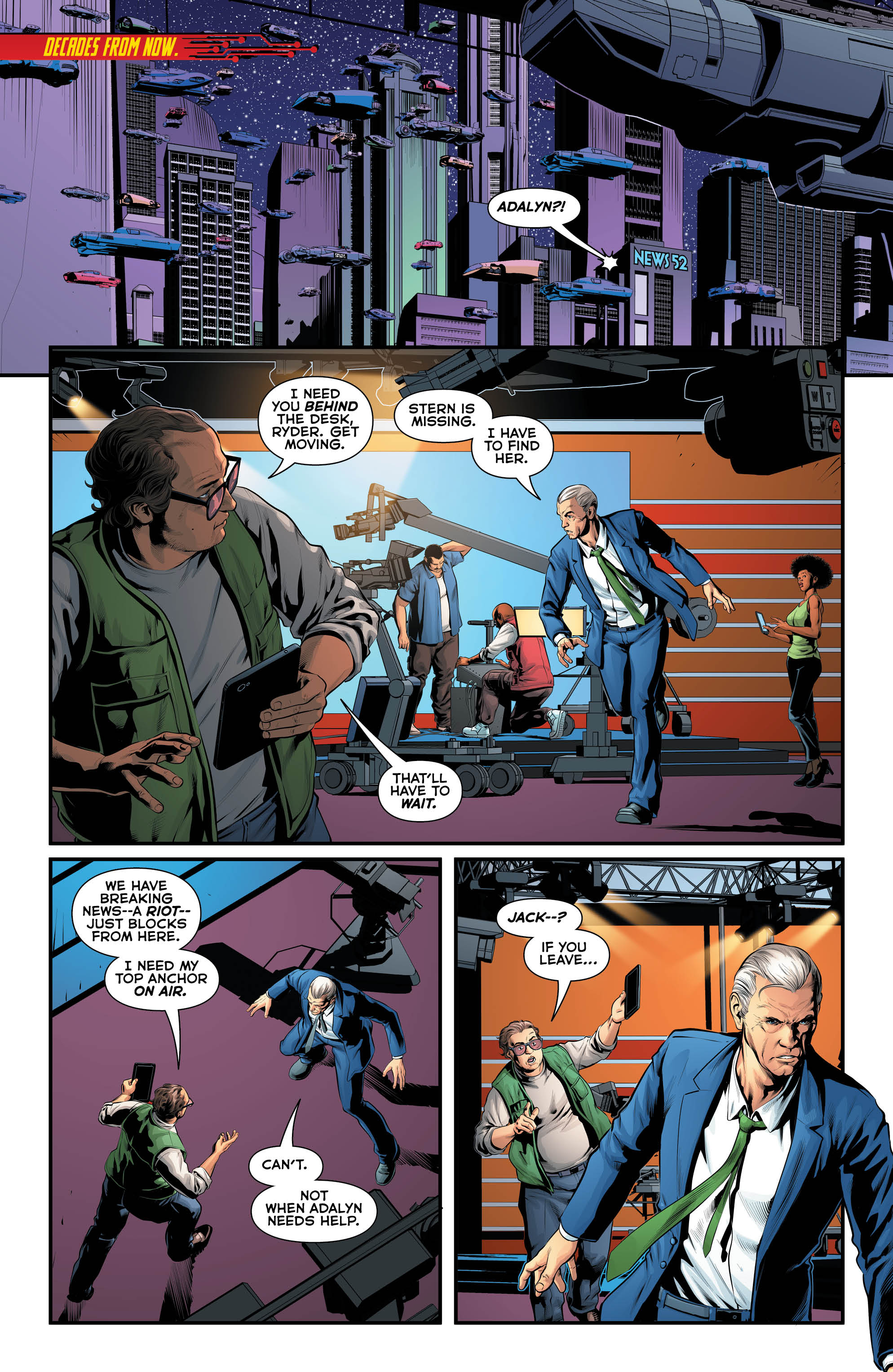 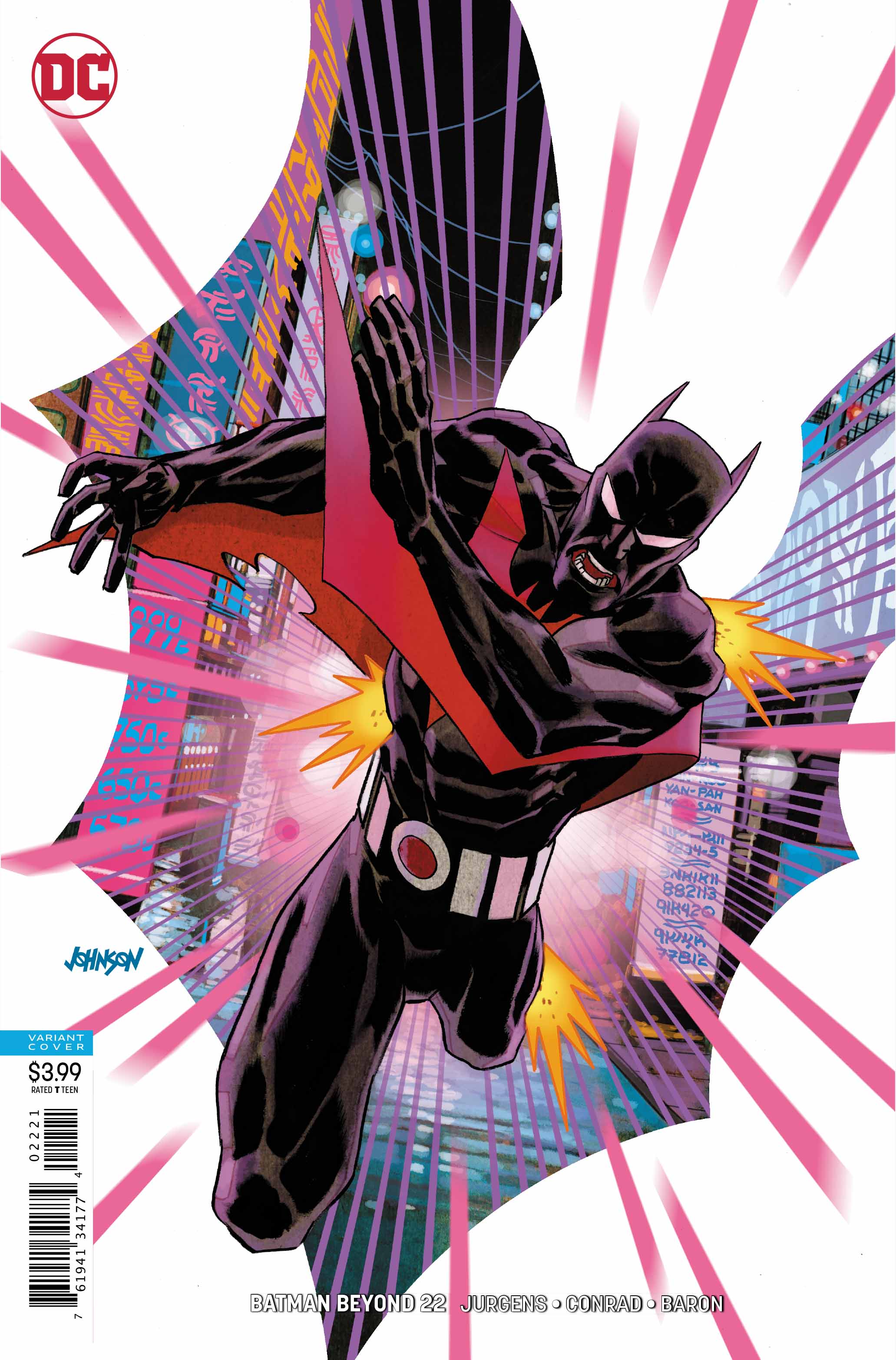 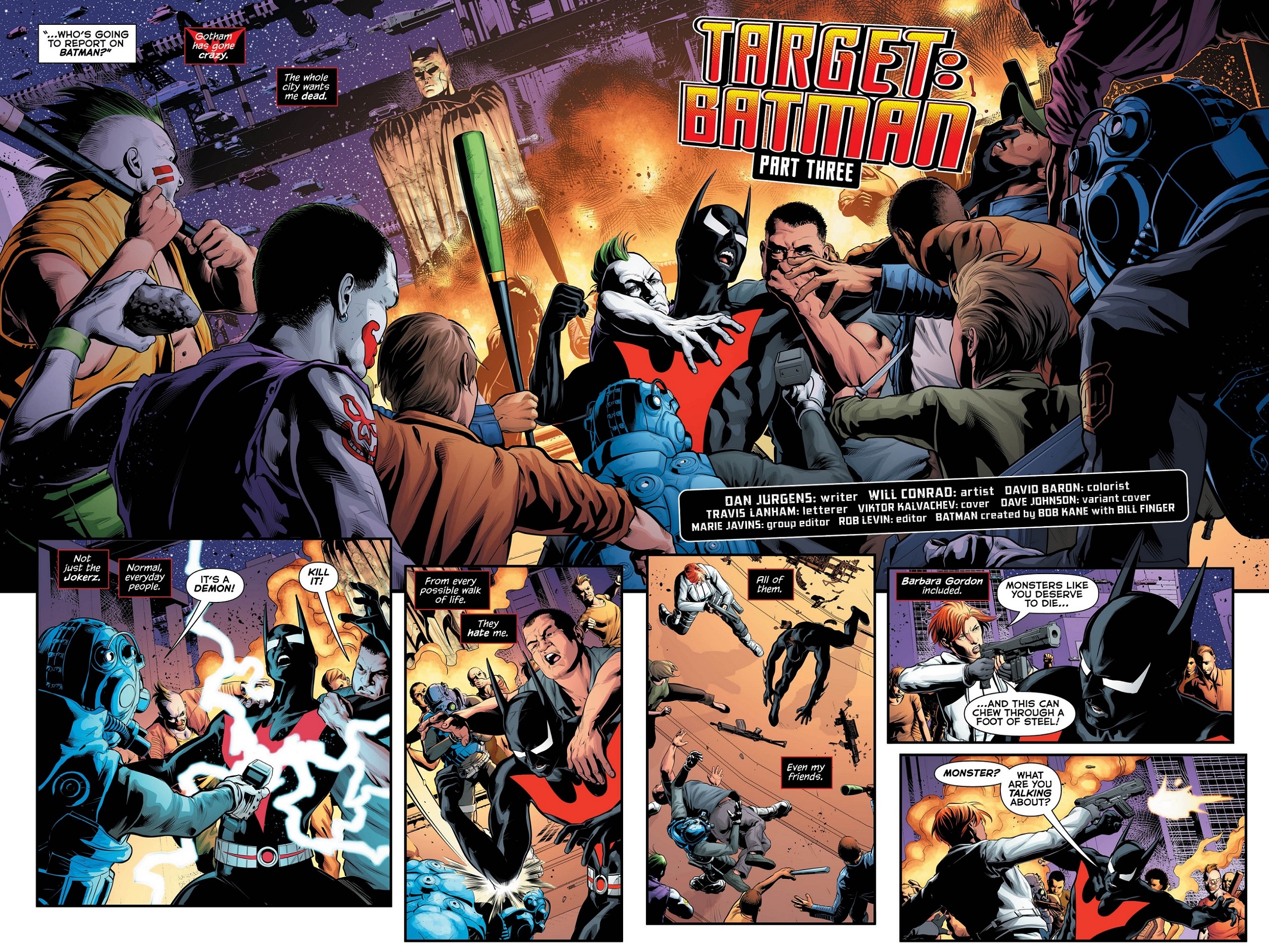 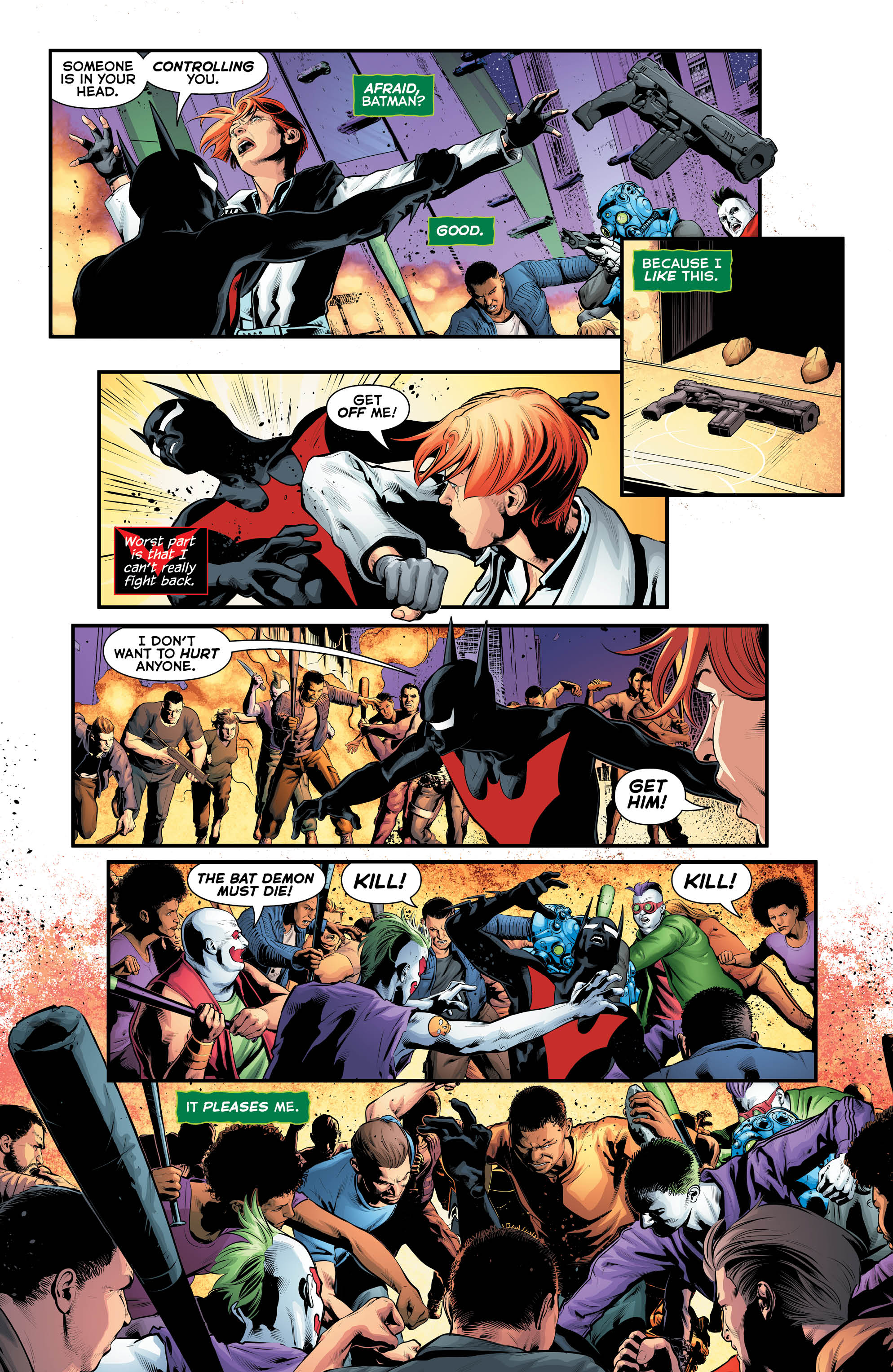 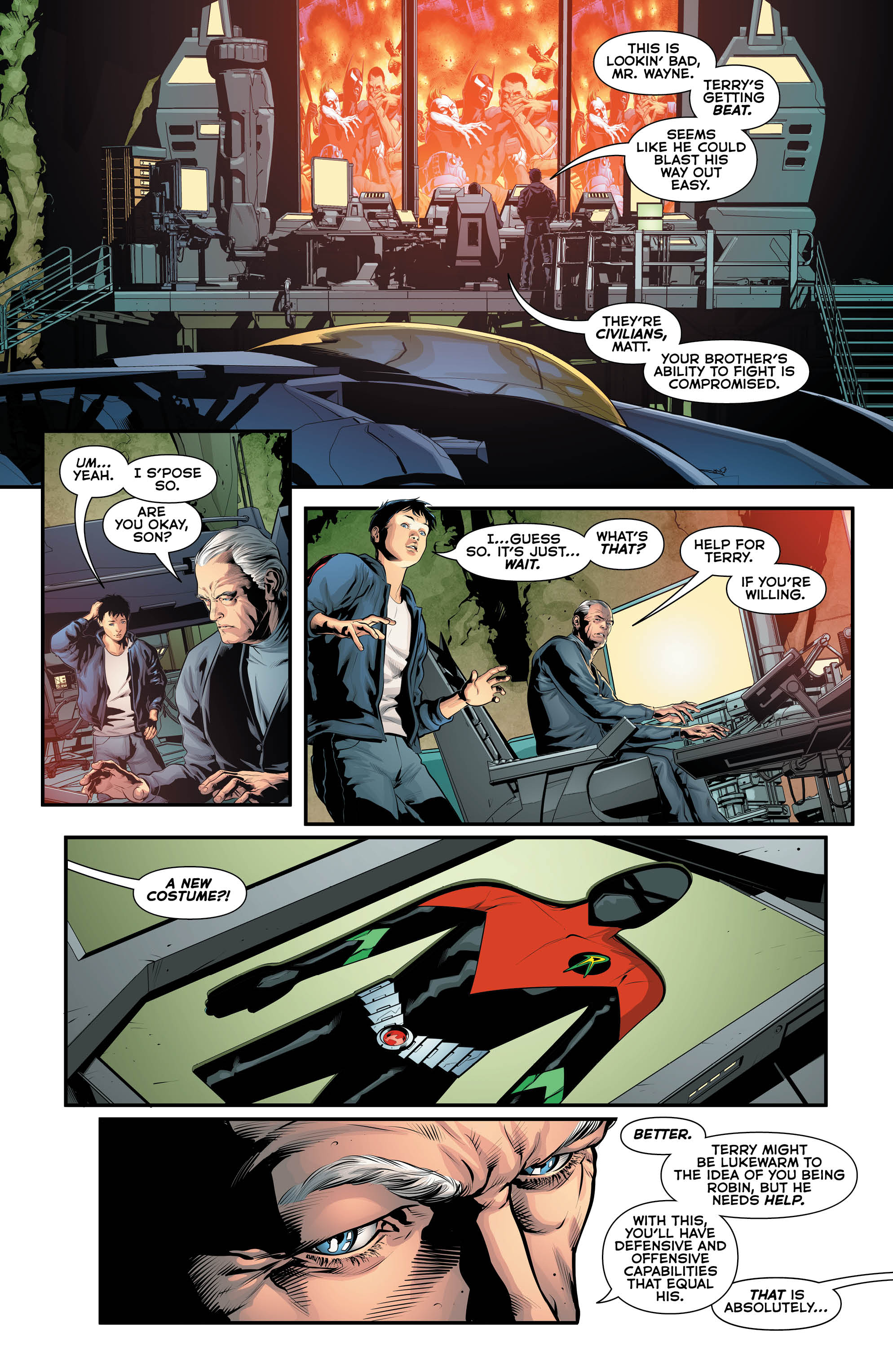 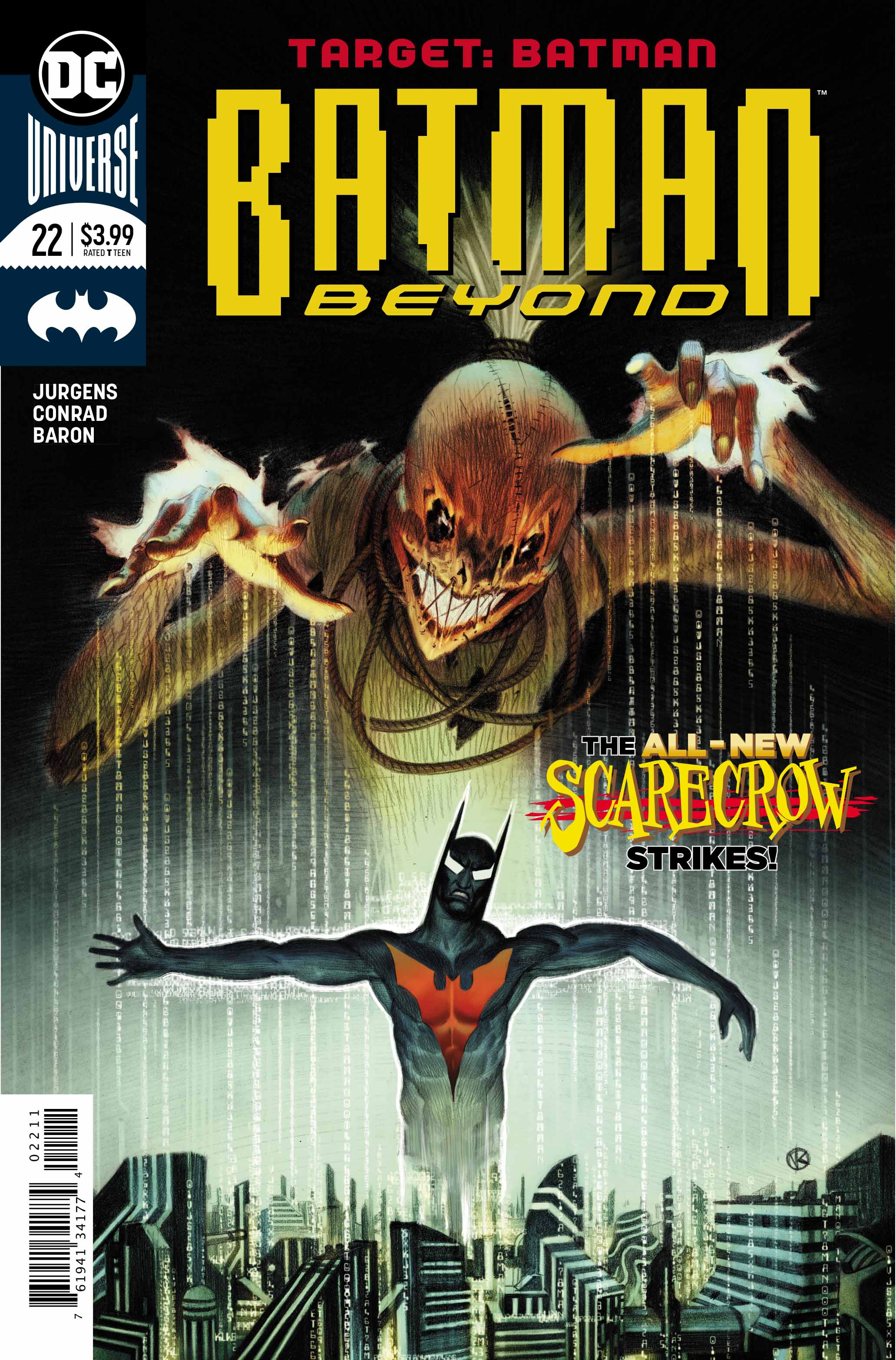 The Scarecrow Won The Nobel Prize! He Was Just Out Standing In His Field

This issue isn’t just brilliantly written, the art is terrifyingly good too! (See what I did there?) I wasn’t overly keen on the artwork in Batman Beyond #20. Issue #21 impressed me a lot more, and in this issue the visuals are excellent. Will Conrad’s pencils and inks are nigh on flawless. Check out the sky traffic jam, Ryder stomping around the news studio, Batman in the grips of a crazed mob. Look at Matt McGinnis’ new Robin costume! Mr. Conrad, I salute you.

Now we come to the color art of David Baron. In this day and age it’s still usually the writers and artists who have the majority of praise thrust upon them. Please, dear reader, remember colorists and letterers too. If your comic reads easily and looks great, then this owes a great deal to these fine talents as well.

David Baron’s color art doesn’t just enhance the already great drawings Will Conrad has created, they make it come alive. This art just leaps off the page. The simple flares of studio lighting, the vivid orange glow of the pyre burning behind Batman, and how this all appears on the monitors of the Batcave. This comes from the combined talents of a great artist, and a fantastic colorist.

Travis Lanham, thank you. I know exactly which thoughts are those of the news dude, and which belong to Batman, or Scarecrow. Readers, look at the subtle difference between the lettering in standard conversation balloons, when compared to the yells of the rabid mob. The only words I can use to describe this fine, yet criminally underrated work are… SCHWAY! And WAHHH… HOOOO!

I usually only review a couple of comics titles, but on this week’s list I had five review assignments! I started off a little nervous, but I am happy – nay, ecstatic – to report that every single one of them was a gem. I’ve never given out so many perfect scores!

Hark, and look yonder… here comes another one.