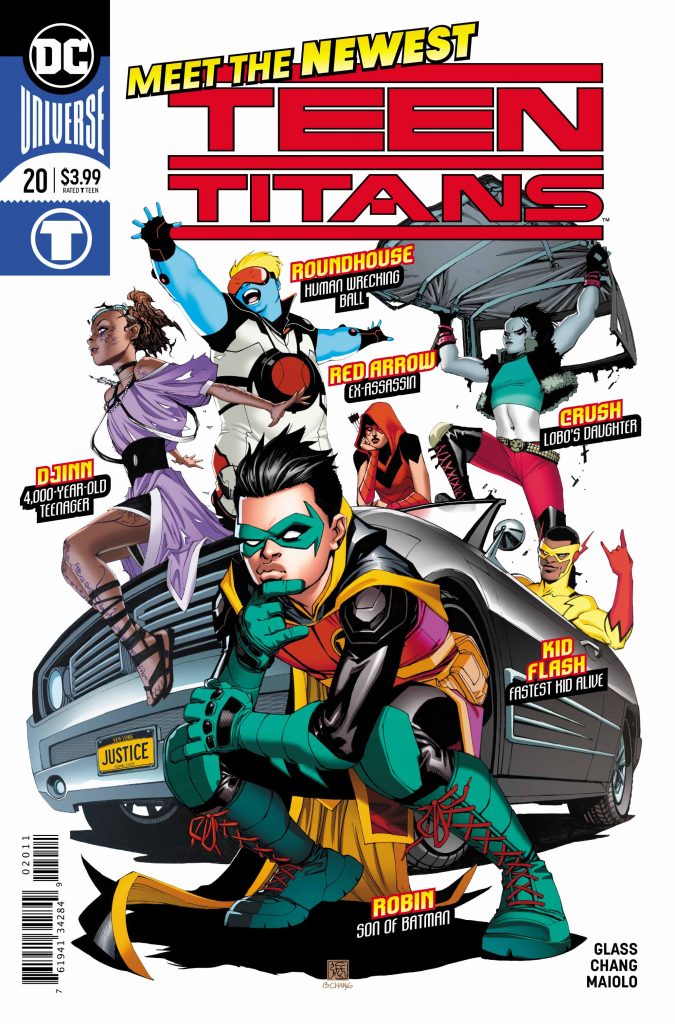 Hot off the heels of Teen Titans Special #1, Adam Glass writes a compelling new beginning using existing threads. Questions answered only spawned new ones. Much like Teen Titans of years past, this iteration sought to separate themselves from the parentage and authority of the Justice League. However, readers witness a more stark departure here in Teen Titans #20. Robin mused on taking the “moral high ground” bit decided that this was no longer the only option in the hero code and started a new Teen Titans team with a new attitude. “Seek and destroy!” replaced “Titans, go!” as their more than apt battle cry.

Teen Titans #20 served as an origin story of sorts. Robin recalled building his team as they faced Brother Blood. He narrated all but one page of the issue. Interestingly, new members Roundhouse, Crush, and Djinn rounded out the team. While the origins of these new characters remain mysterious, readers learned Roundhouse is a friend of Kid Flash and Crush is Lobo’s daughter. If nothing else, her inclusion in Teen Titans signaled to readers its stark contrast with other line-ups. Still, Djinn was the most mysterious of the newcomers. She was described only as a 4,000-year-old teenaged genie who wields magical powers.

While the introduction of the new team was intriguing, Robin remained the most dynamic character. He showcased a maturity previously void. Damian has turned a new leaf, even coaching his teammates, “You’re part of a team now. You don’t need to take on everything by yourself.” Who is this kid?! While Damian’s leadership has matured, something was amiss. Readers learned underneath the new veneer lies the meticulous and ruthless Robin we’ve come to expect – and perhaps more so! 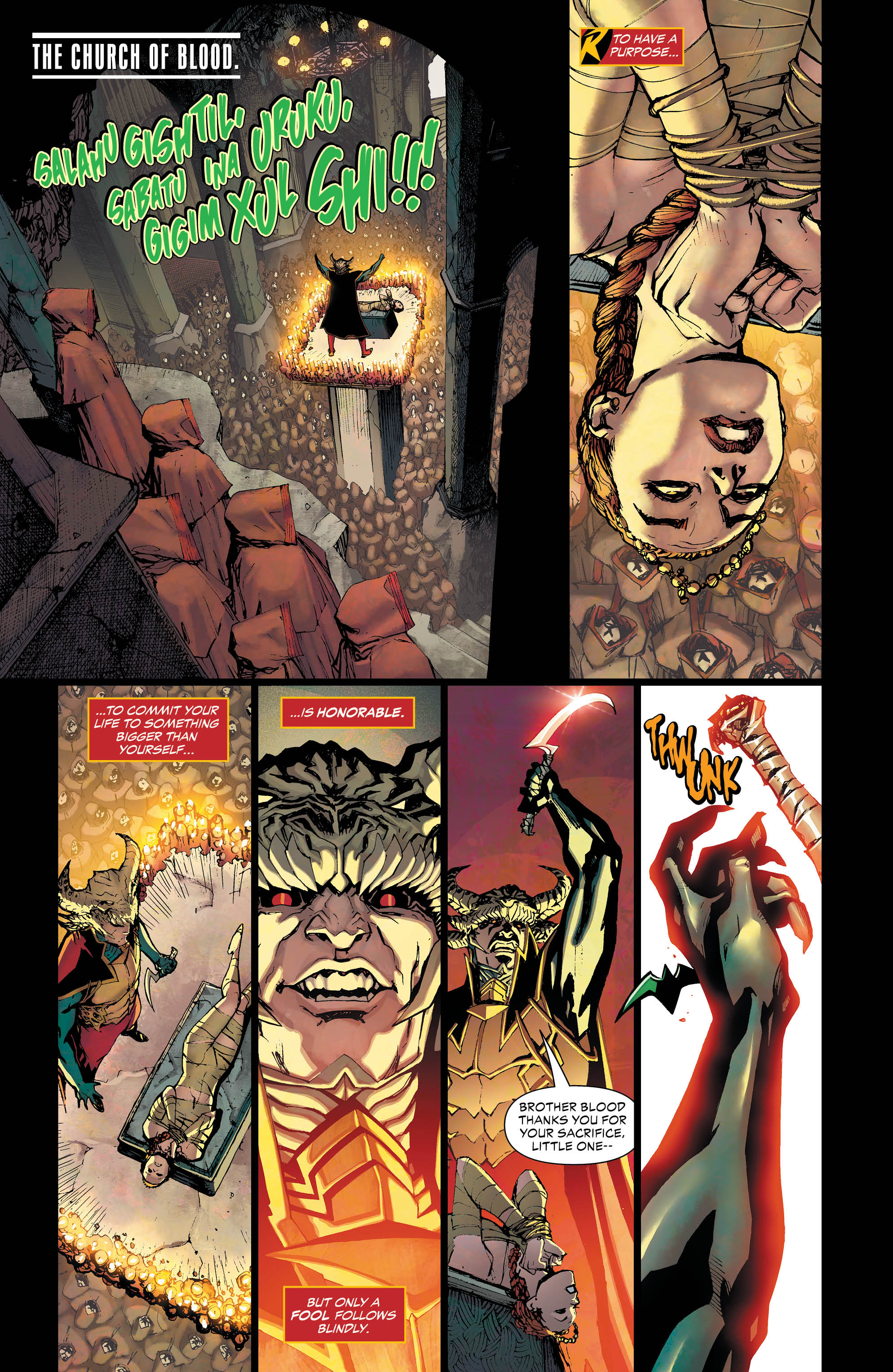 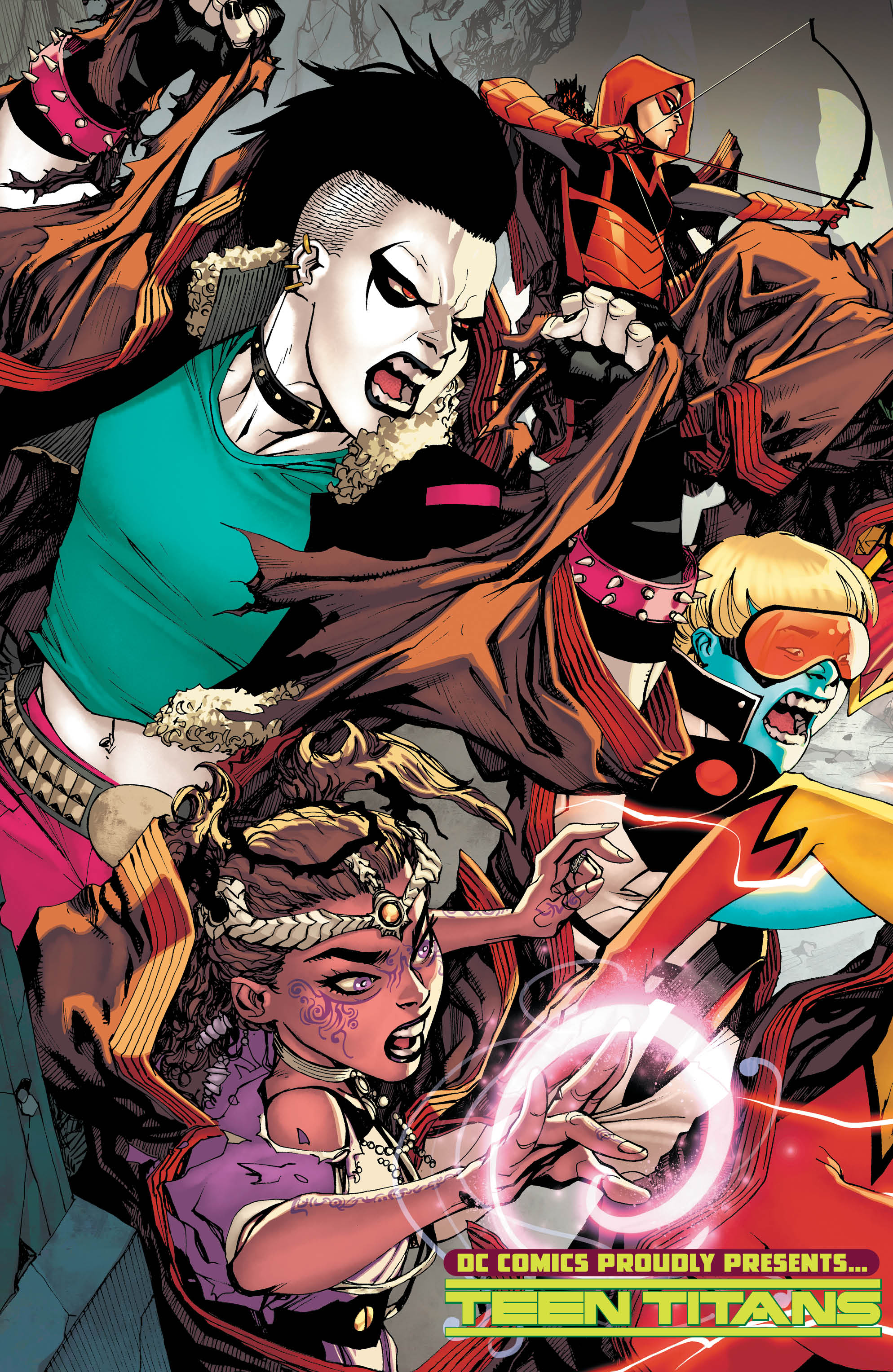 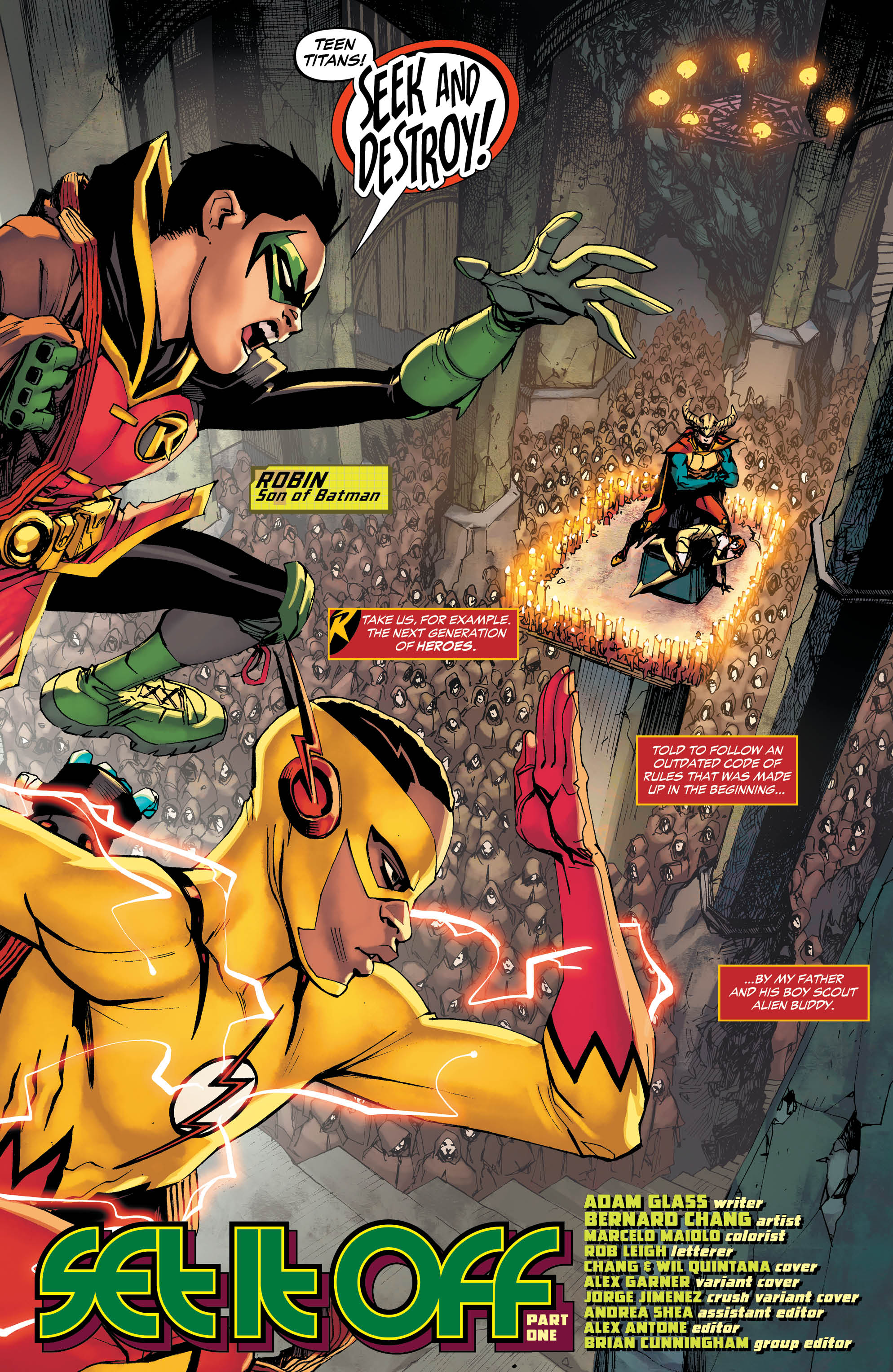 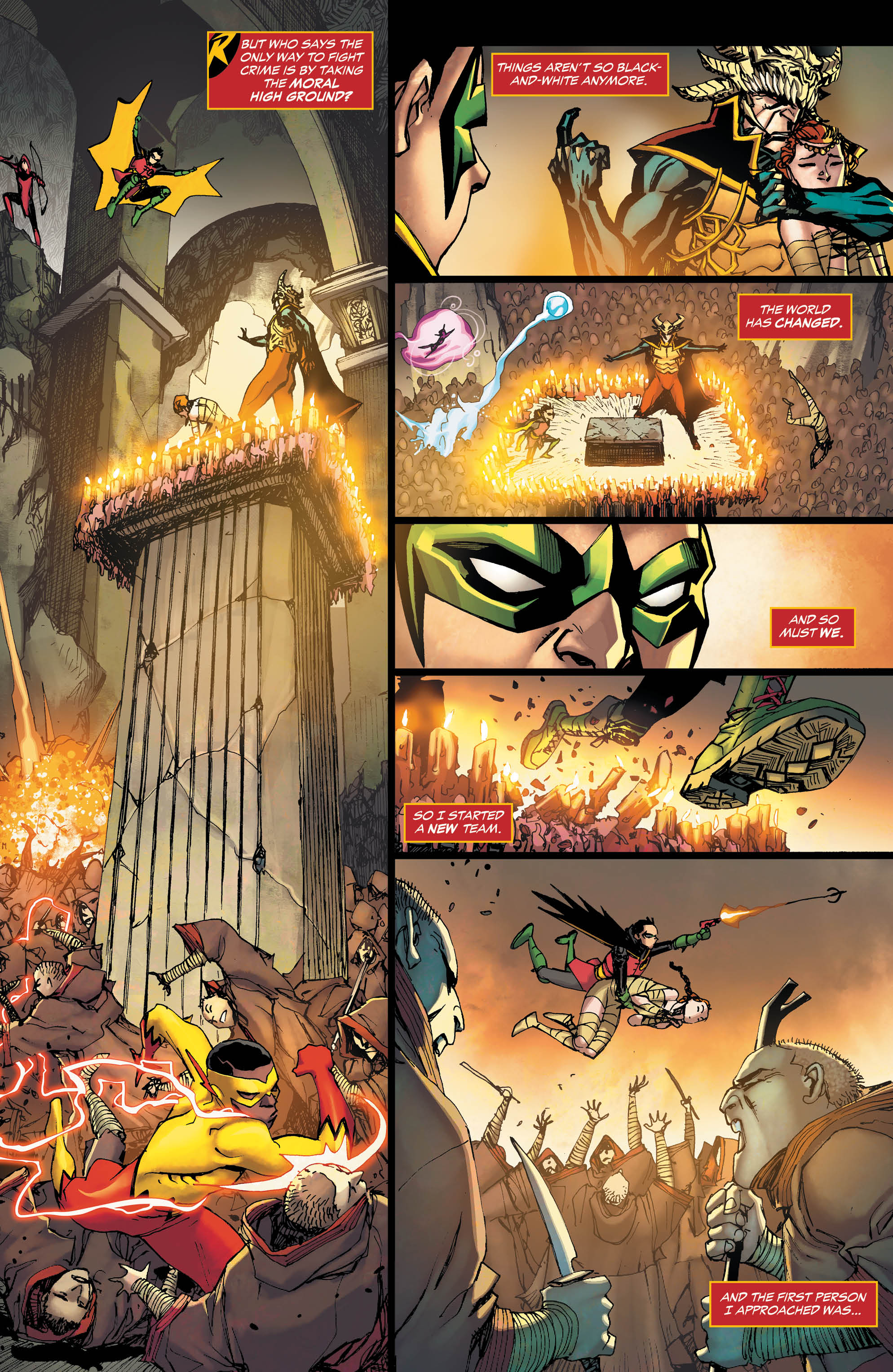 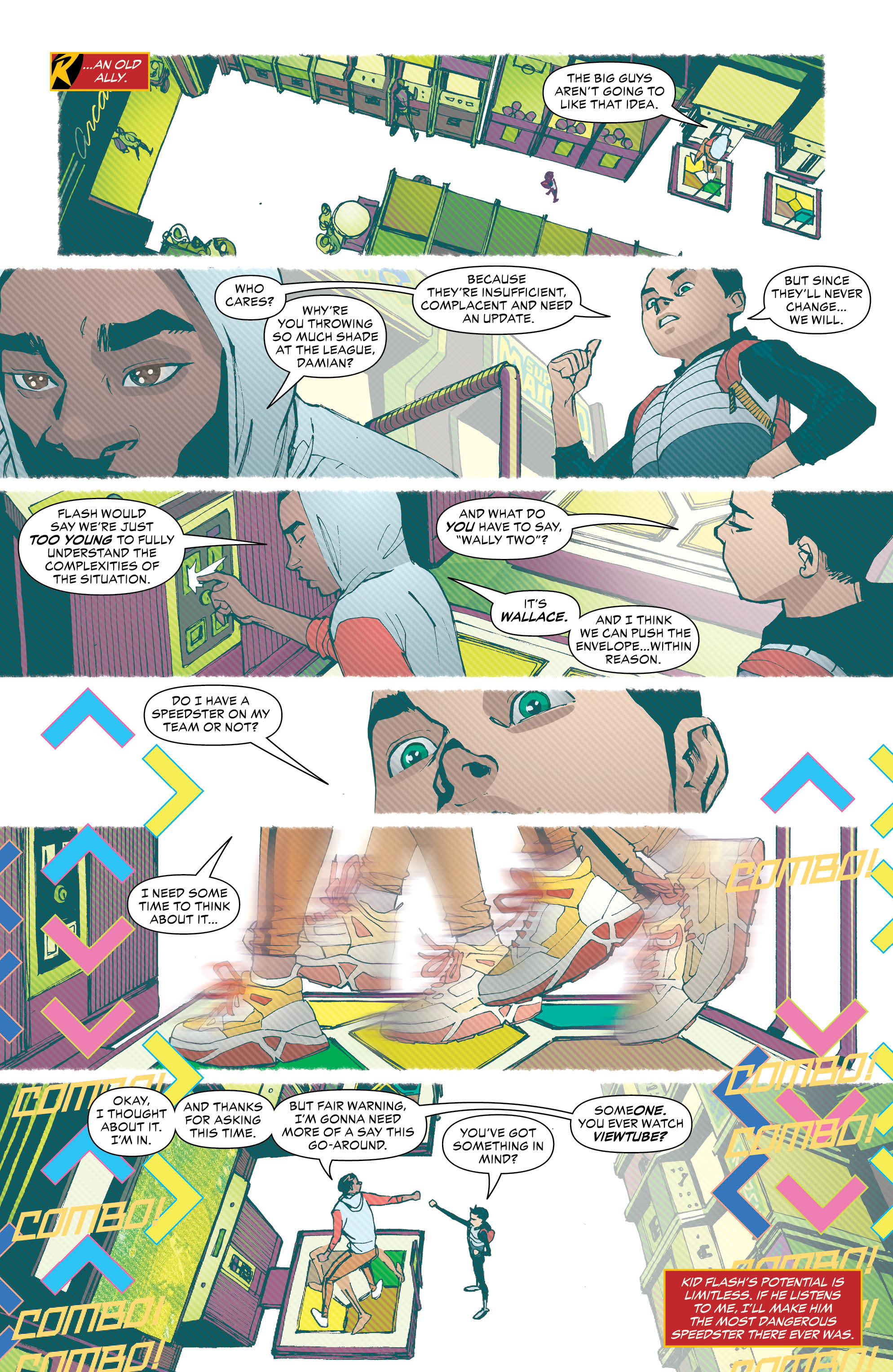 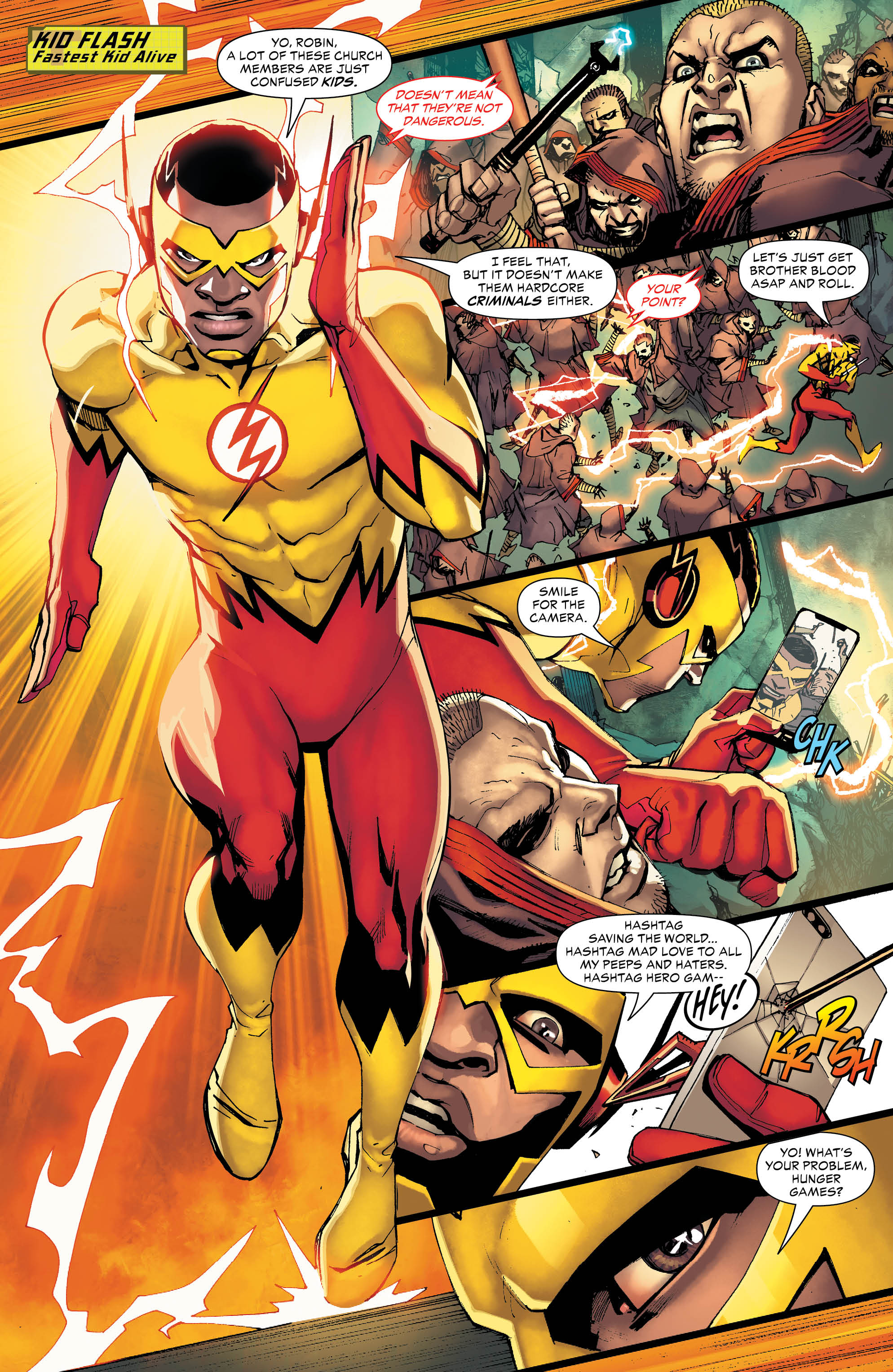 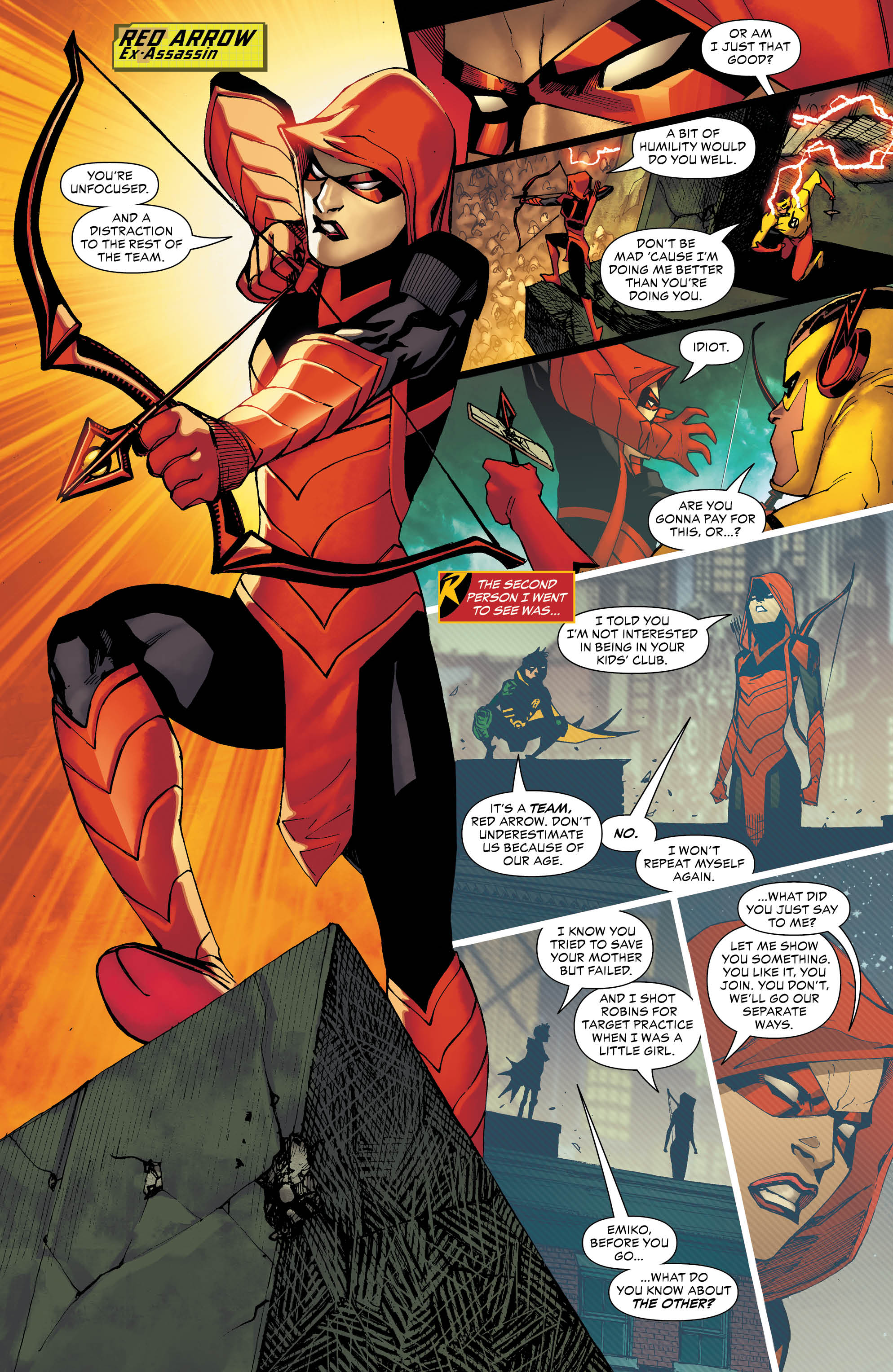 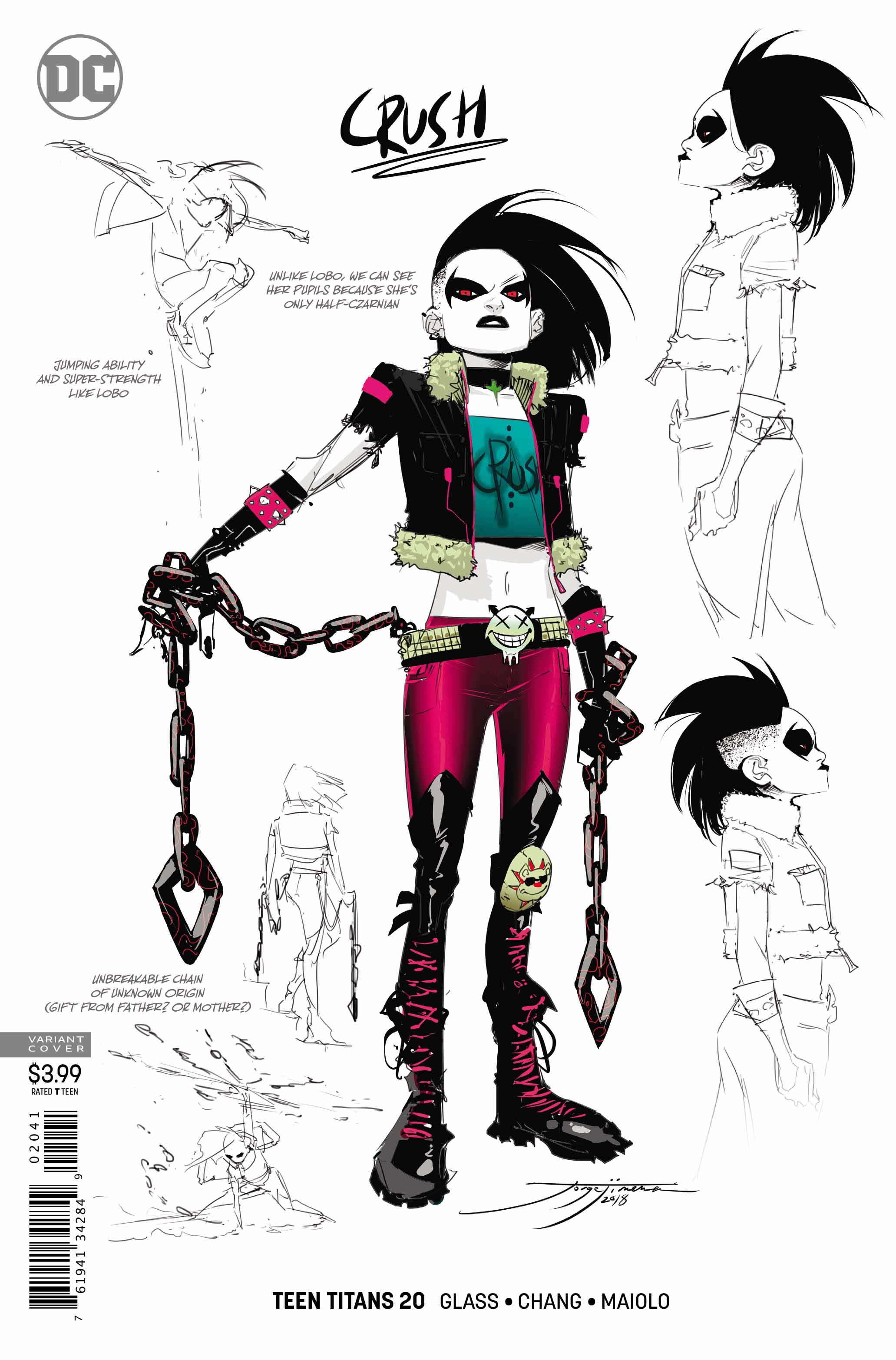 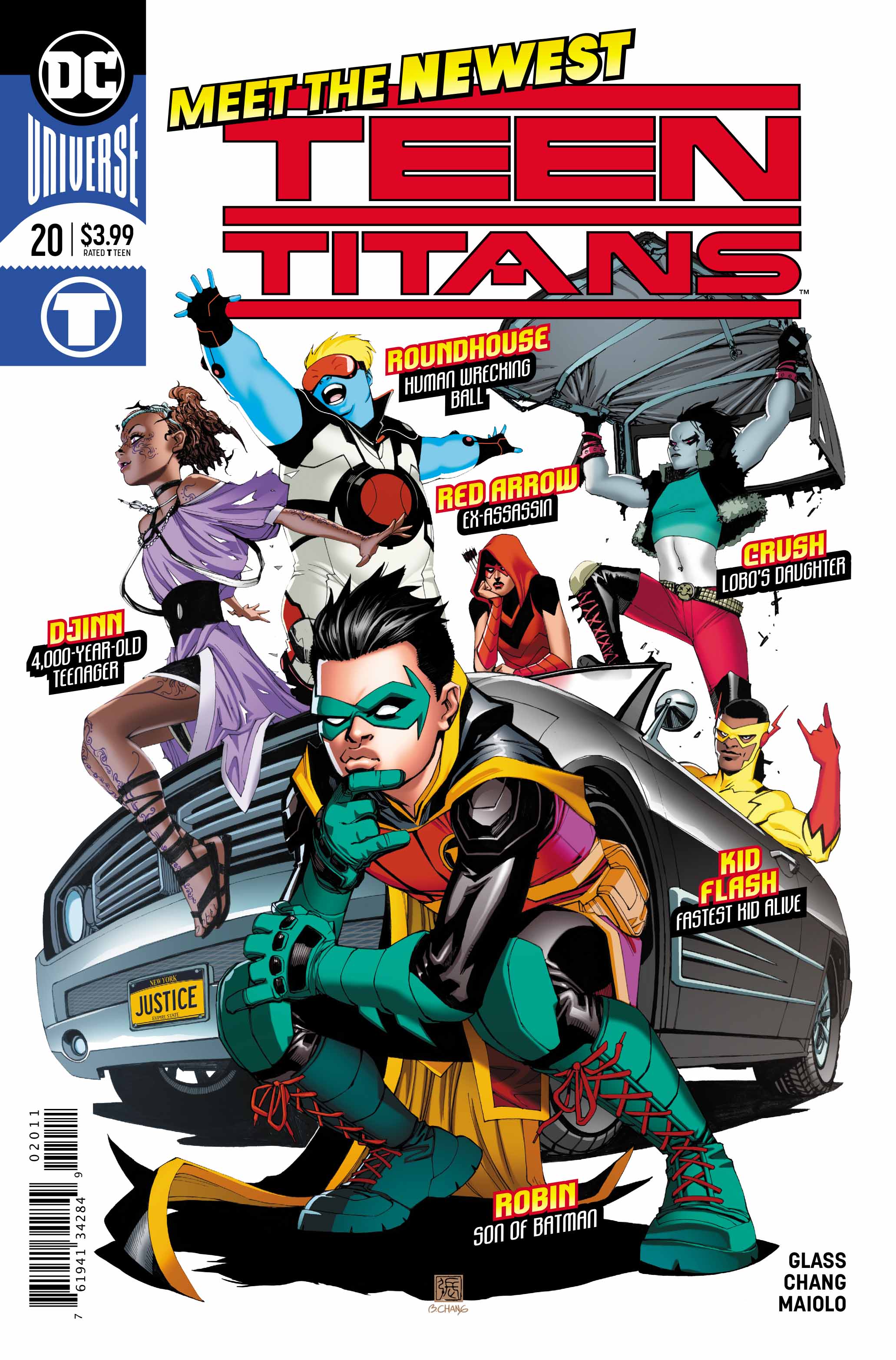 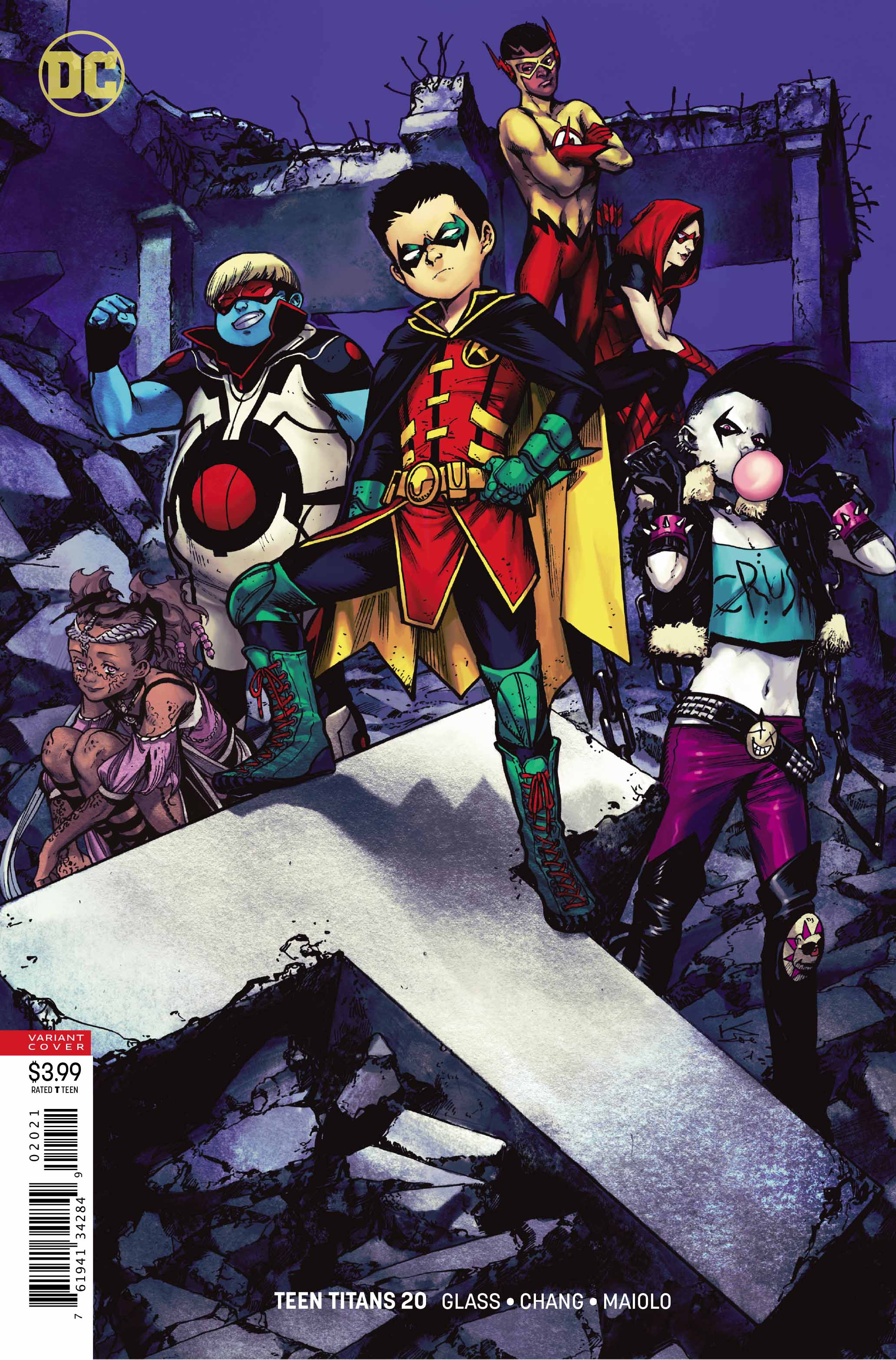 Fittingly, the exquisite artwork matched the outstanding narrative of the issue. Bernard Chang brought fine lines and detail to each character and panel. The action was intense and the pace of this issue was rhythmic. Also, each hero got their own brilliantly vertical, half-page splash. The settings were beautifully rendered and colors popped and muted when appropriate. Additionally, the panel variations were cool and added an enjoyable frame to its contents. Most noteworthy, Marcelo Maiolo’s colors layered the issue. Specifically, the muted, washed-out tones set off flashbacks to the past right alongside vibrant, present-day action on a shared page. Rob Leigh’s lettering added character to the dialogue and paired well with the rest of the artwork. Truly, it’s a visually beautiful issue.

Surprisingly, in only two issues Adam Glass and company weaved incredible narratives together in compelling ways. Familiar elements are met with exciting new directions. It’s beautifully written and rendered. Typically, I lean into the familiar when it comes to team books. I like the dynamics between team members as I anticipate reactions and relationships and potential problems down the line. However, here I found myself connected to the mix of old and new. And, that last panel? Wow!

I believe readers are in for a treat as this creative team shifts its gears in full, fluid synchronization. Certainly, DC has placed the beloved Teen Titans title in quite capable hands.