It’s been two years since the release of the first ever DC Film that unites the two biggest superheroes in comic history. Regardless of questionable reviews, the film grossed over $855 million worldwide. No question that it was intriguing and compelling to watch.

One aspect we love of Zack Snyder is his interpretation of characters. From 300 to Sucker Punch, he turns gods to mortals or mortals to gods. In Man of Steel, he brought Superman down from the strong-minded, mild-mannered reporter to someone questioning his existence. Clark Kent questions if his humanity is genuine, and this is a constant theme of the DCEU Superman.

I love Snyder’s Bruce Wayne. He is emotionally scarred by trauma, and when a person is affected this way, they are anything but flawless. They’ve even depicted him mixing pills and alcohol, carrying nightmares familiar to PTSD, and he carries deep mistrust in any goodness in the world, including Superman.

The opening sequence from the movie Batman v Superman: Dawn of Justice, left a few folks lost for an interpretation. Specifically, the part where young Bruce is lifted into the air by bats. After two years, the director shares his explanation of the scene “A Beautiful Lie.” Check out the response: 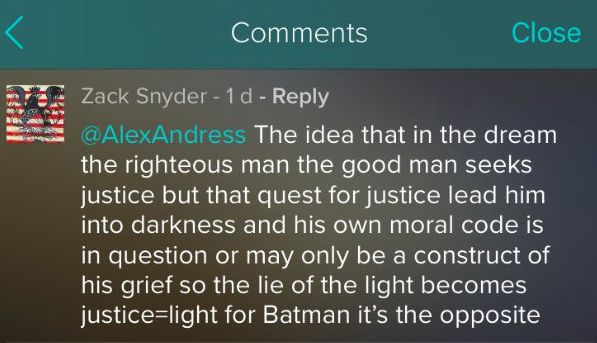 And it is interesting light on why Batman had an immediate distrust for a man who’s saved thousands of people from floods, explosions, and fires because he made a mistake. It was a massive mistake and the hate in Bruce’s heart for Superman pushed him to the brink of insanity.

Snyder says that the light for Batman is the opposite. Therefore, the darkness is Batman’s justice and any light is a lie. For the righteous man to fight and challenge this lie will risk Batman’s moral code, as it did so much in Batman v Superman.

It’s a very cool explanation, I’m digging any thoughts Zack has on Batman. If you’d like to be reminded of the opening scene, watch below!