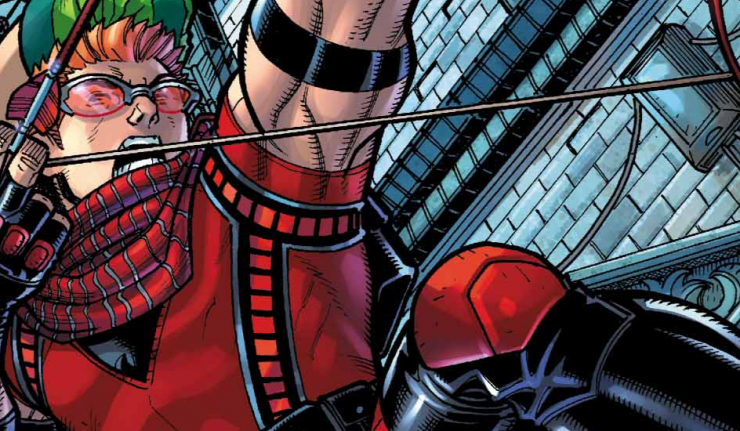 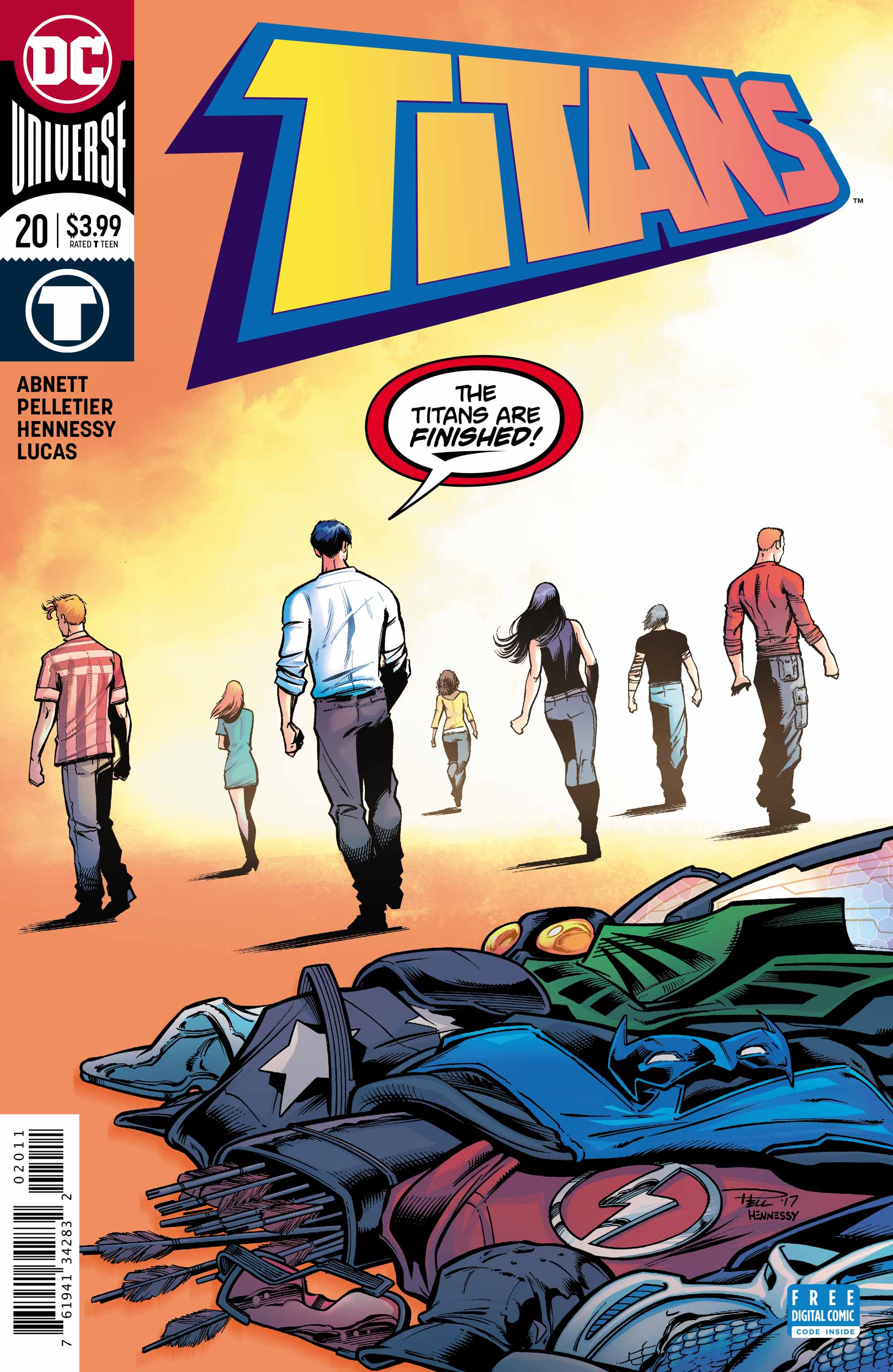 The Justice League has disbanded the Titans following their encounter with Troia, fearing the threat remains. Romance is budding between two Titans, Roy Harper and Donna Troy. Titans #20 sees Donna kept under surveillance in the JL Satellite, while Roy finds himself in over his head tracking down a drug cartel. Separated from his team and new love, Roy stands alone – that is until a past lover comes to his aid – Cheshire!

Roy Harper and Cheshire have a complicated history. Cheshire is a terrorist and known assassin; Roy, a flawed hero. False pretences brought the two together as Roy (then, Speedy) was tasked by Checkmate to gain her trust and facilitate the apprehension of the assassin by the authorities. Rather than turning her in, the two fell in love. Their romance produced a daughter, Lian. Lian has been the source of much conflict between the two. She was killed by Prometheus in an attack on Star City (see Justice League: Cry for Justice). Cheshire blamed Roy for not being able to protect their child. However, Lian was brought back to life by Dreamslayer in the Convergence arc in an effort to turn Roy against his allies.

For his part, Roy has famously battled drug addiction – cue the iconic Green Lantern/Green Arrow #85 cover – and has taken dark turns on occasion. His persona has changed from Speedy to Arsenal to Red Arrow and back and forth again. Recently, however, Harper has been clean and sober leaving Cheshire and drug abuse in the distant past. Attuned readers know her arrival can’t bode well for Roy Harper.

Abnett’s tale gets rolling as Roy and Cheshire set out to bust a drug cartel looking to score greater market share by selling an inferior imitation of “bliss” – a hardcore drug dominating the street market. “Bliss” is apropos as the ex-lovers reconnect in combat and later, between the sheets. However, Cheshire has ulterior motives and pushes Roy toward his demons. Readers learn she is back to her mercenary ways, this time at the whim of her employers, The Brain and Monsieur Mallah. 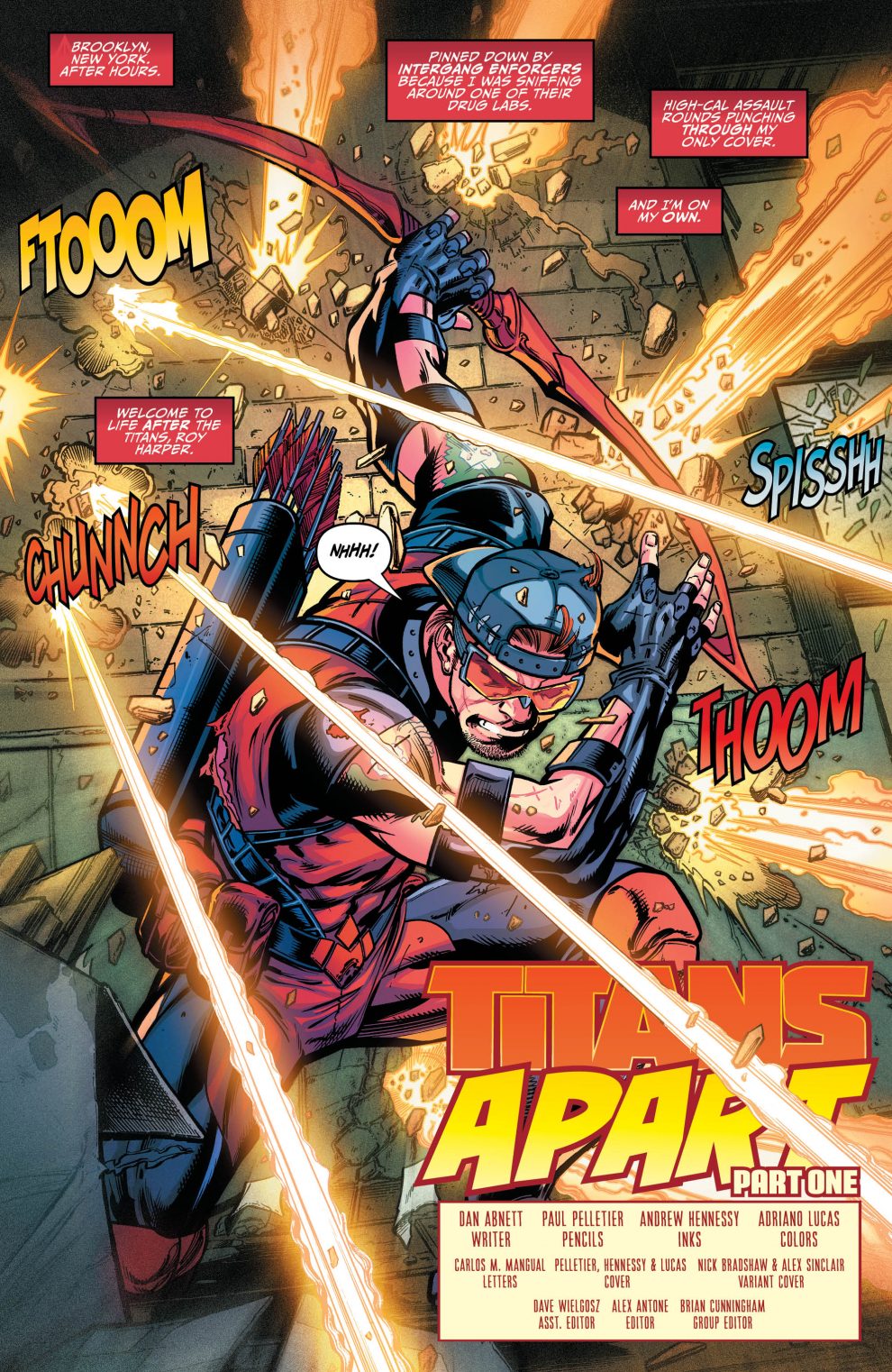 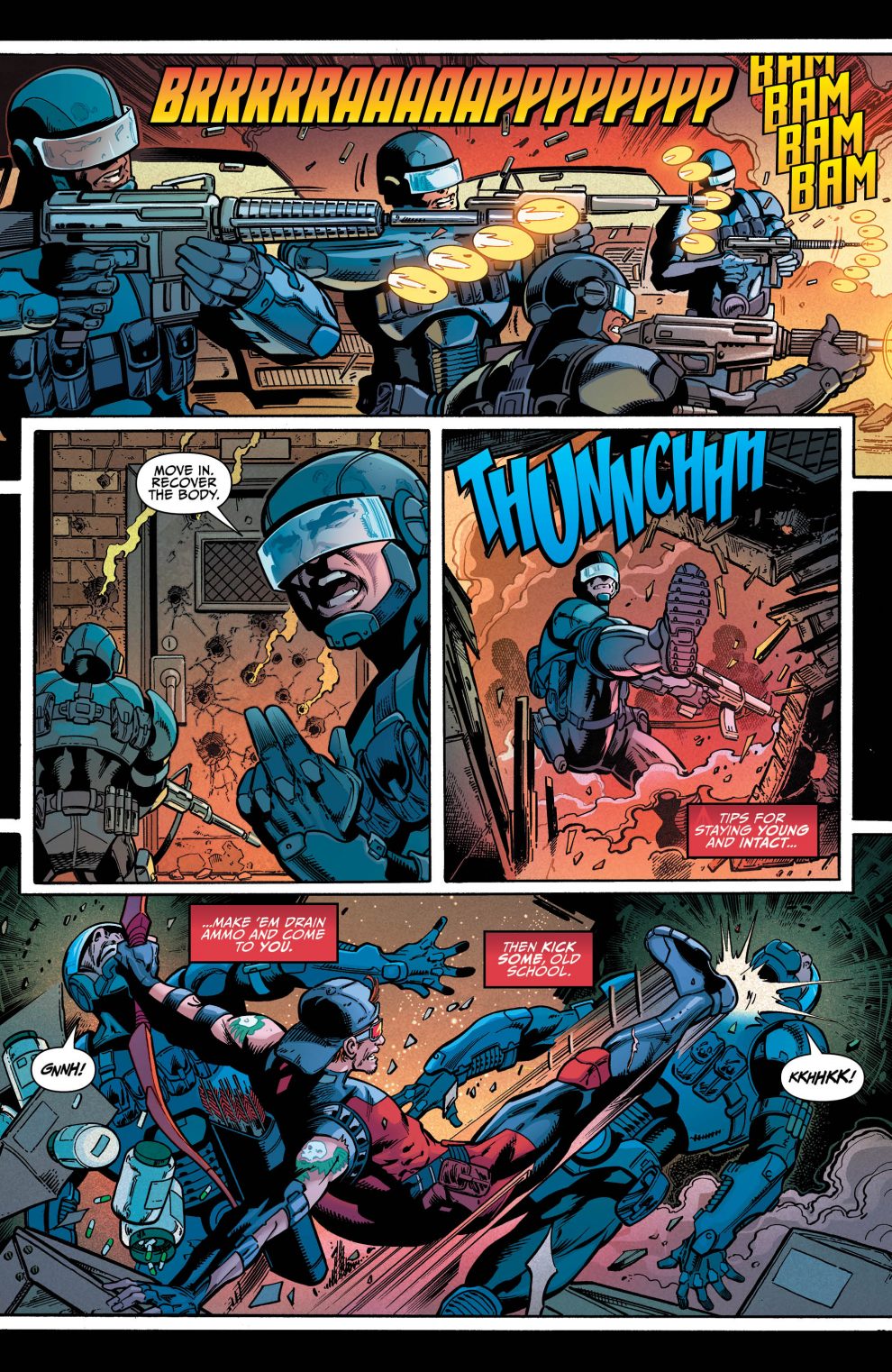 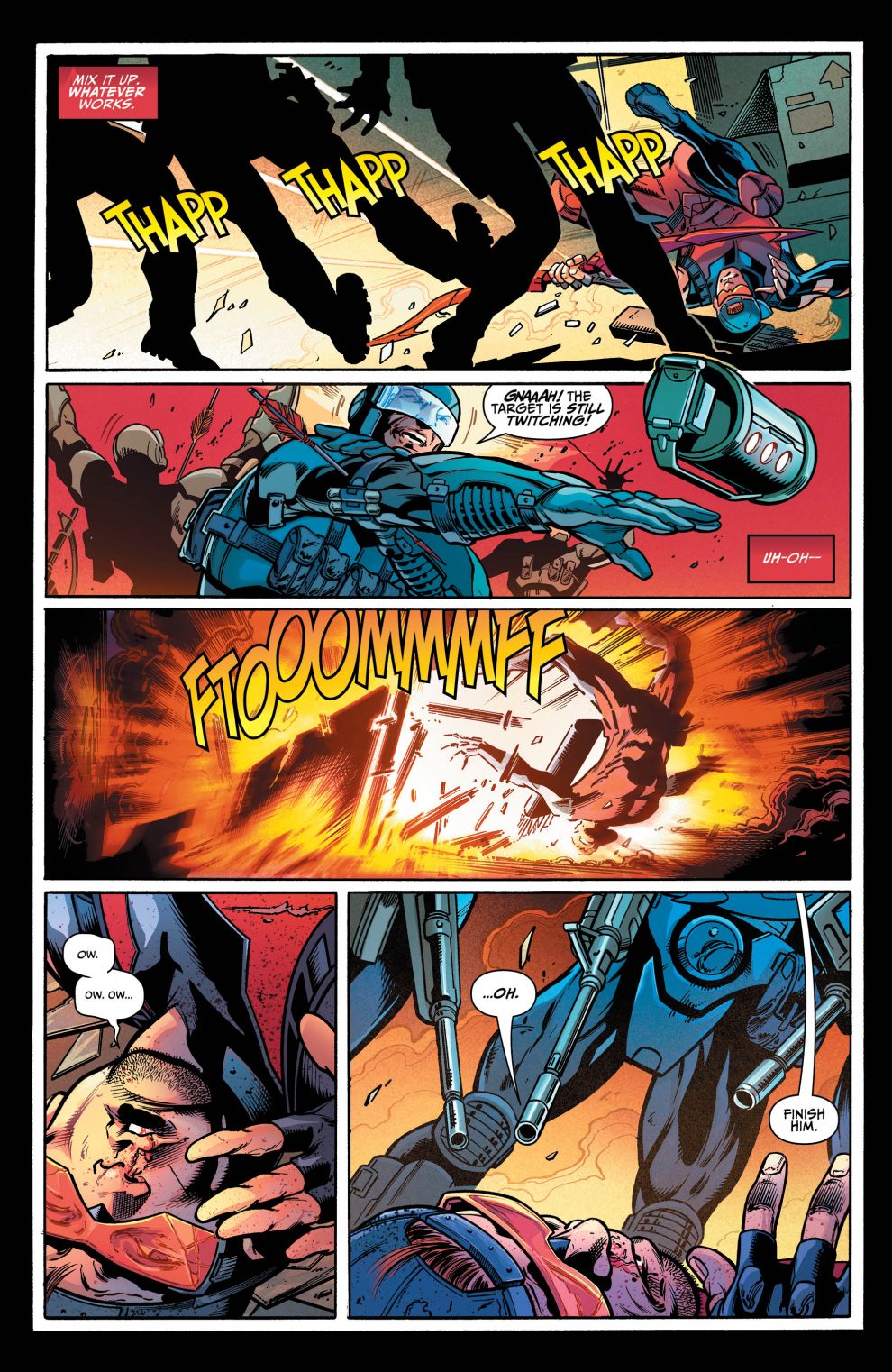 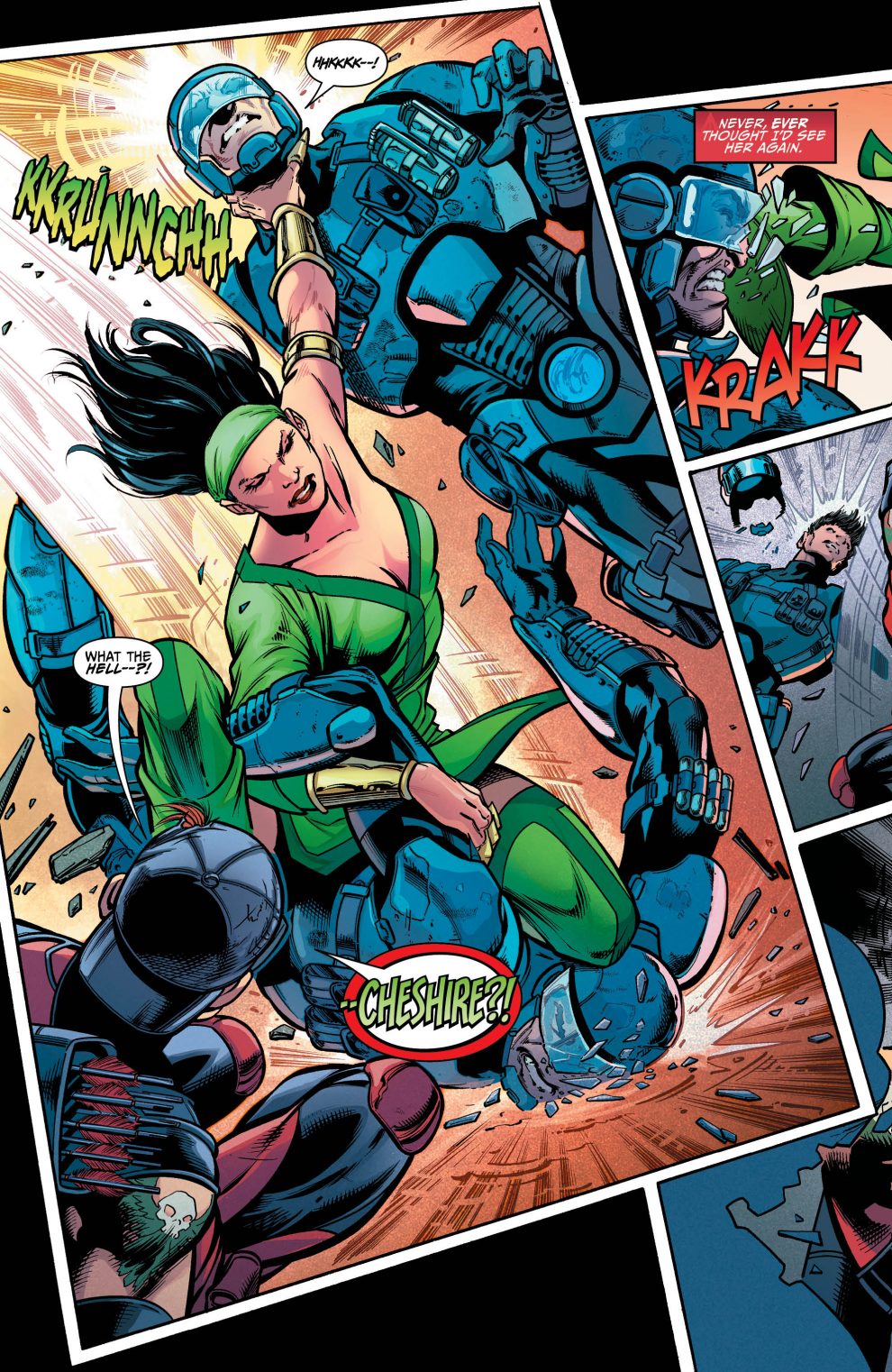 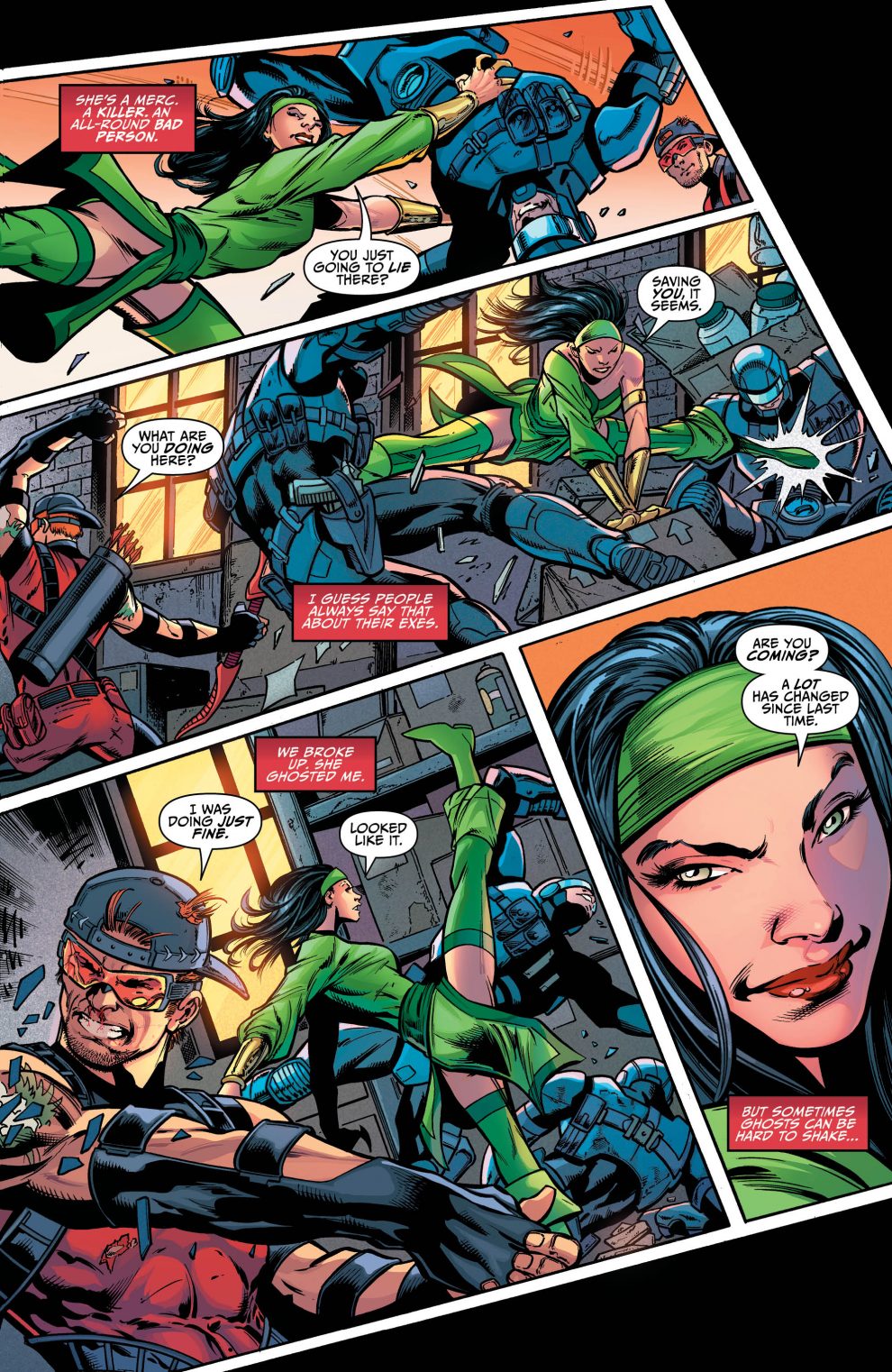 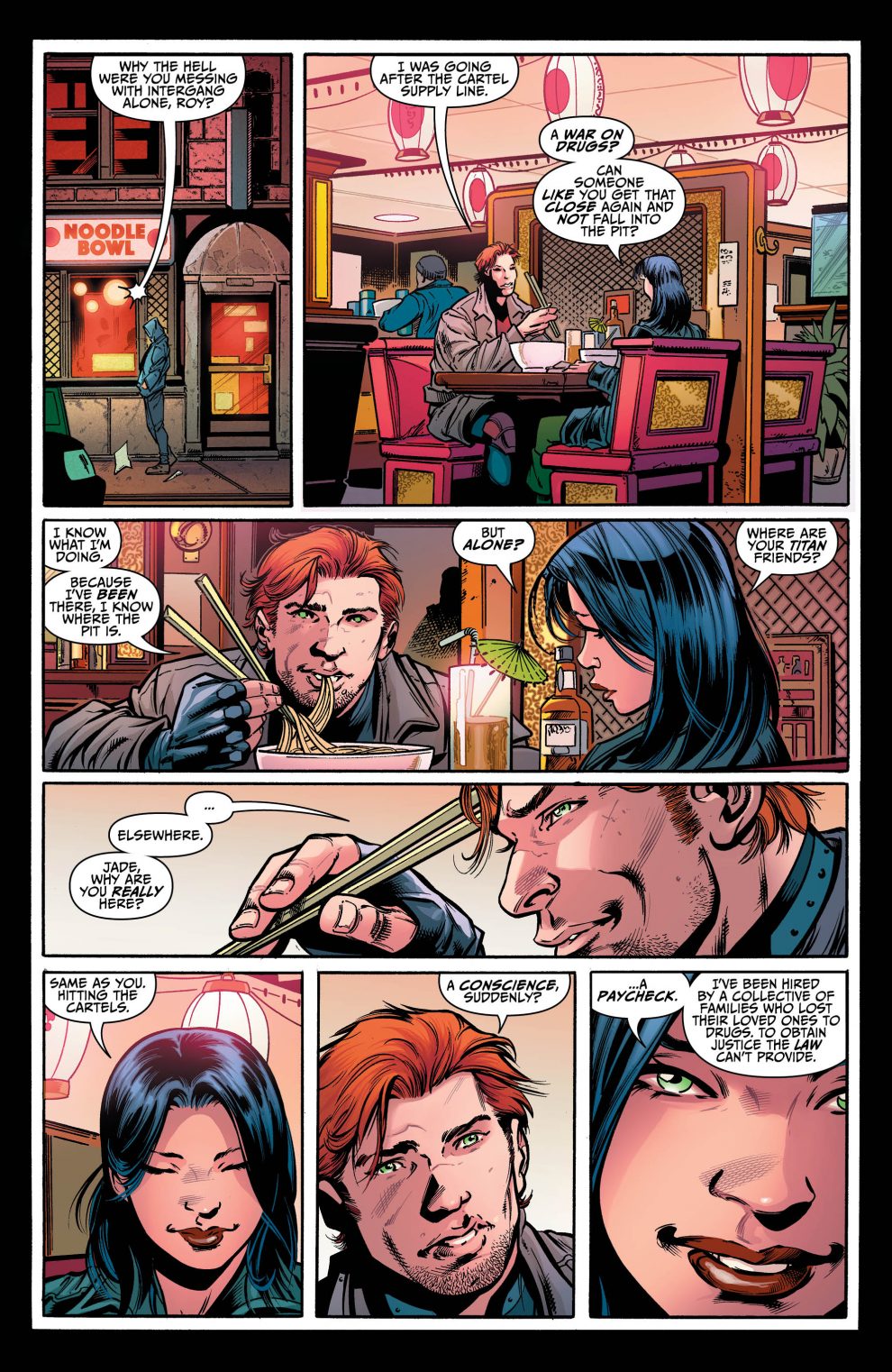 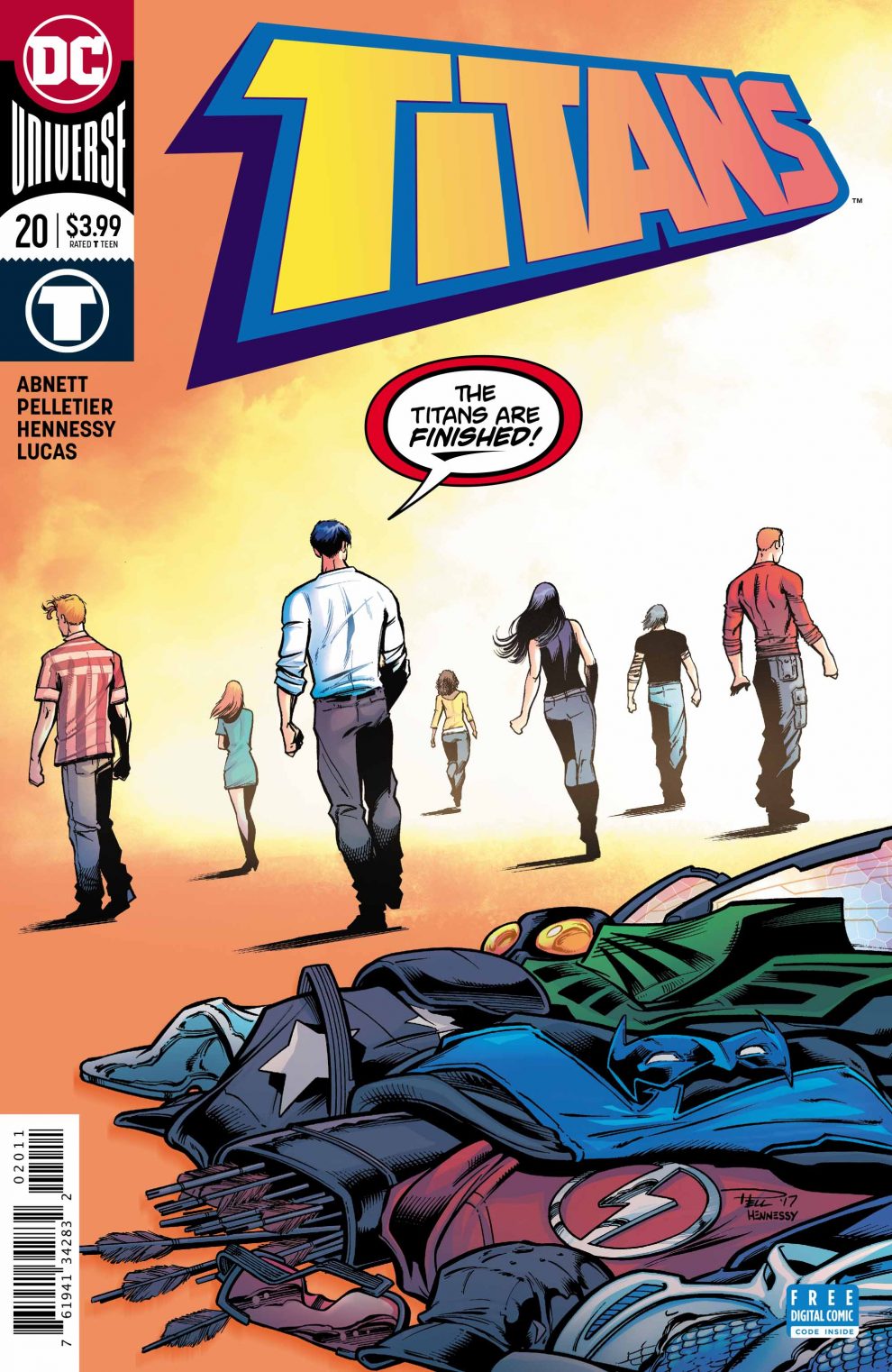 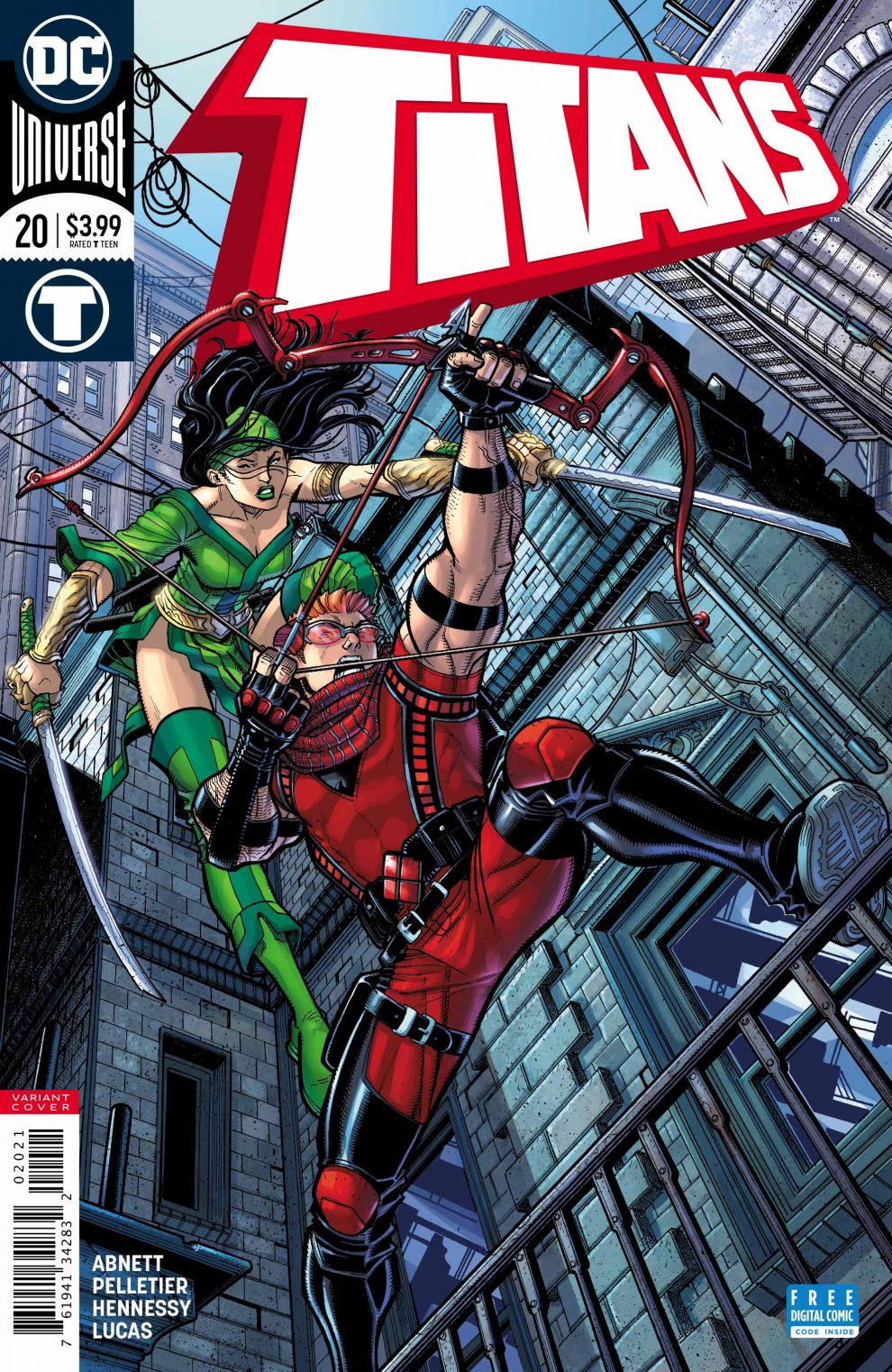 While I truly enjoy the angle of a Roy-Cheshire “reunion,” I would have loved to see this stretched out a bit more. The build-up of relational drama between Roy and Donna and Cheshire would have led to a gut-wrenching turncoat reveal. Palpable emotion could have built throughout the arc and brought readers lacking the background on these characters’ sordid history up to speed. Frankly, I think Cheshire can carry more weight than given here. Still, it is Part 1…perhaps we will see more drama from this on-again-off-again couple soon? To be fair, my critique is more pronounced due to my general dislike of The Brain and Monsieur Mallah as villains. I’m hoping a better, more sinister villain is pulling Cheshire’s strings.

Paul Pelletier’s art is very good. Figures are well drawn; facial expressions, in particular, emote appropriately adding to the texture and depth of the story. Color leaps off the page and moves the reader’s eye easily across the panels. It lacks perhaps a bit of the richness of Booth’s work, but in no way serves as a distraction. I thoroughly enjoy the way Titans #20 looks and feels.

Titans #20 is a good start to a potentially great story. The allusions to Roy’s past were poignant for long-time readers but may have been lost on newcomers. The revelation of lesser villains left me a bit cold. Still, Roy’s past coming back to haunt him is an intriguing device to get the plot rolling. I was disappointed to see the Roy-Chesire reunion seemingly cut short but have faith this creative team is leading us to a potentially larger payoff down the line. The art is fantastic and carries the story forward in visually appealing ways. Titans #20 is a good launching point with the makings of an intriguing narrative.

Tags:cheshiredan abnettRoy Harpertitans
share on: FacebookTwitter Tumblr
previous article
DC Puts Iconic Versions Of Superman And Batman Against Each Other
next article
An Exciting Glance At The New Eaglemoss Collections 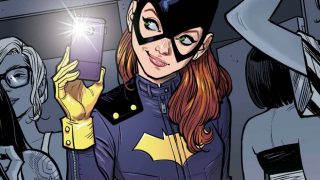 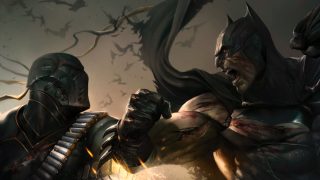