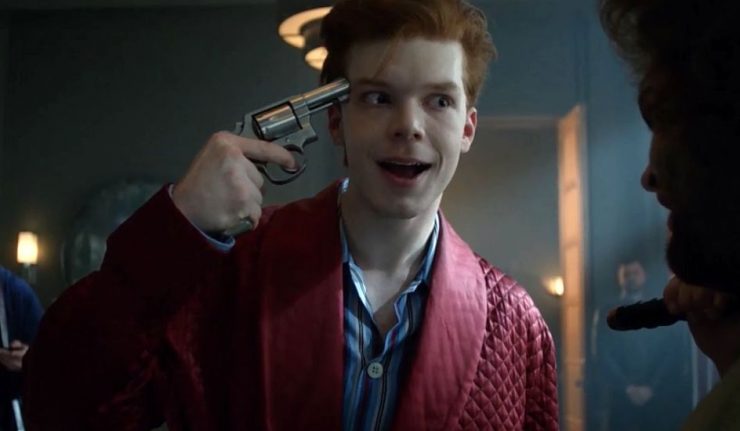 Gotham‘s star, David Mazouz recently revealed the Joker will be joining the cast of villains. Apparently, Bruce Wayne will be facing an iconic moment in the upcoming episodes.

At first, Gotham had fans believe Jerome Valeska, a rogue villain from season 2, was the Joker. However, (spoiler alert) this character doesn’t make it. Cameron Monaghan’s left an unforgettable impression on his insane character, that it led to many fan theories on how Jerome is the Joker.

Alas, the young star tells us that Jerome is not the fabled arch-nemesis of the Dark Knight:

He’s not the Joker, that’s all I’m saying. He’s definitely the inspiration for the Joker and the way that the Joker comes into the show is one of the most brilliant things Gotham has ever done.

To have Mazouz be this proud of Joker’s entrance, it will be an exciting event. Jerome is the plant of evil, even his father tells him: “You… will be a curse upon Gotham. Children will wake from sleep, screaming at the thought of you. Your legacy will be death and madness.”

The Joker is death and madness. Mazouz continues:

I can confirm. What we’ve cooked up and discussed is something not to be missed. It’s a twist on familiar themes, both new and old echoes of the mythos. Something entirely new, but we believe true to the spirit of the show as well as the comics. Proud I got to be a part of it.

And so there you go, Gothamites. What do you think Gotham will write to create a bigger evil than Jerome? Although, he was pure chaos. And if the series can add genius into that evil, then the GCPD needs to meet Batman soon.