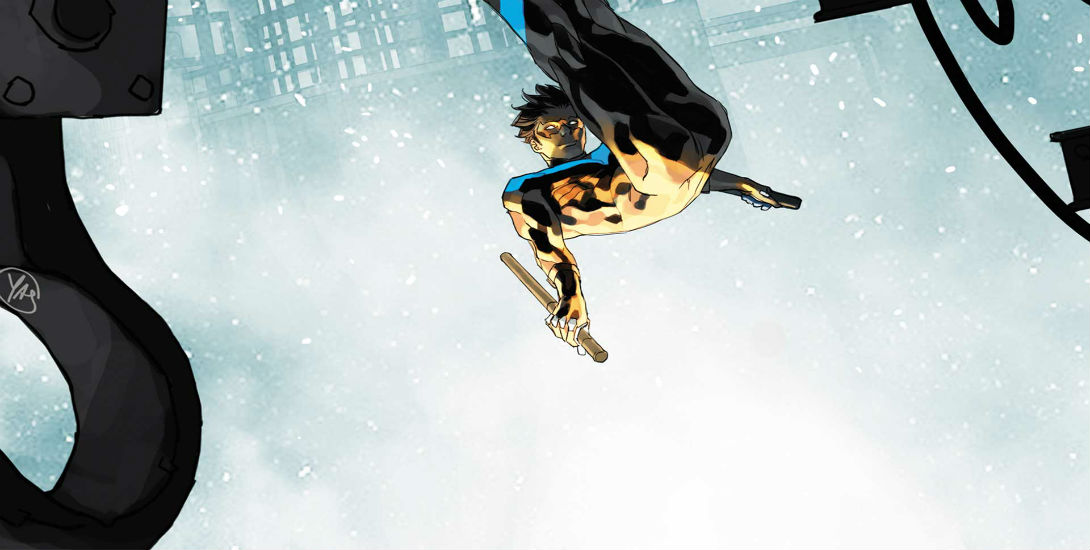 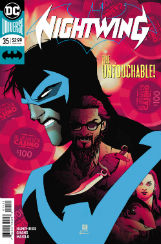 A new issue of Nightwing has arrived! Along with it, a new writer. Yes, sadly longtime Nightwing writer, Tim Seeley, has departed and Sam Humphries (Green Lantern) has taken the reins. I was sad when I first heard that Tim Seeley would be leaving the series. I was astonished by how well Seeley draws Nightwing and thus I was intrigued to review the series when I was offered the opportunity.

While I do admit some storylines fell flat in the previous arcs I’ve reviewed, Seeley has nevertheless faithfully depicted the eponymous hero consistently throughout his run. Seeley’s faithful realization of this beloved hero is what kept me hooked throughout his run.

After reading Nightwing#35, I am happy to say that the series is in good hands.

Usually at this point, I would be dwelling into the story, however I just have to talk about the fantastic cover art! Brought to you by Bernard Chang & Marcelo Maiolo, who are also the issues’s artist and colorist, this cover just blew me way the second my eyes bore witness to it. I don’t normally write about issue covers, but this one was so visually arresting that I couldn’t resist. The bright colors mixed with the shadows endowing the characters gives the cover a neo-noir aesthetic, which coincides brilliantly with the issue’s neo-noir tone/detective tone.

Nightwing adjusts to his relatively new life after defeating his nemesis, Raptor. He now works and lives in a gym he has purchased with his remaining funds. Just as he was to become accustomed to his new life, he must now investigate a brutal homicide, committed by a somewhat innocent citizen. It turns out, another foe from Nightwing’s past has re-emerged and is running amok in Bludhaven. His name is the Judge.

As part of his investigation, Nightwing questions a key witness, the fish-man hybrid Guppy. Through his conversation with Guppy, Nightwing deduced that the Judge’s casino chips may have something to do with the casino patron’s unexplained violent outburst.

For some reason, I found this issue to be more grounded than its predecessors. I liked that Sam Humphries balanced Nightwing’s heroic escapades and his personal life. You can tell Sam Humphries wanted to instill his own take, by reiterating Nightwing’s own identity.

NIghtwing isn’t Batman. He doesn’t live in a mansion, have access to a vast amount of money or possess a convenient array of gadgets. Sam Humphries has done a brilliant job of making Nightwing very relatable. 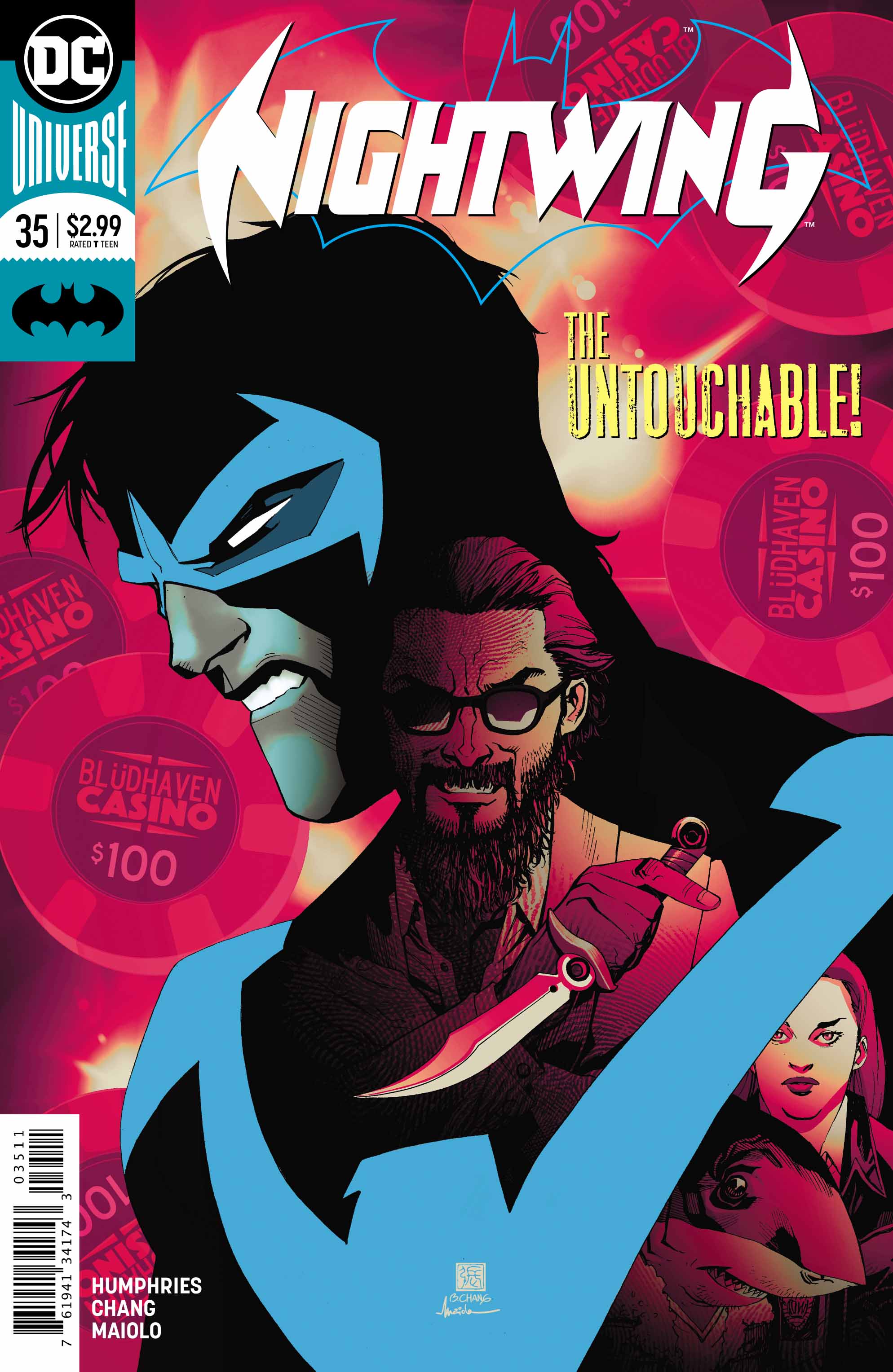 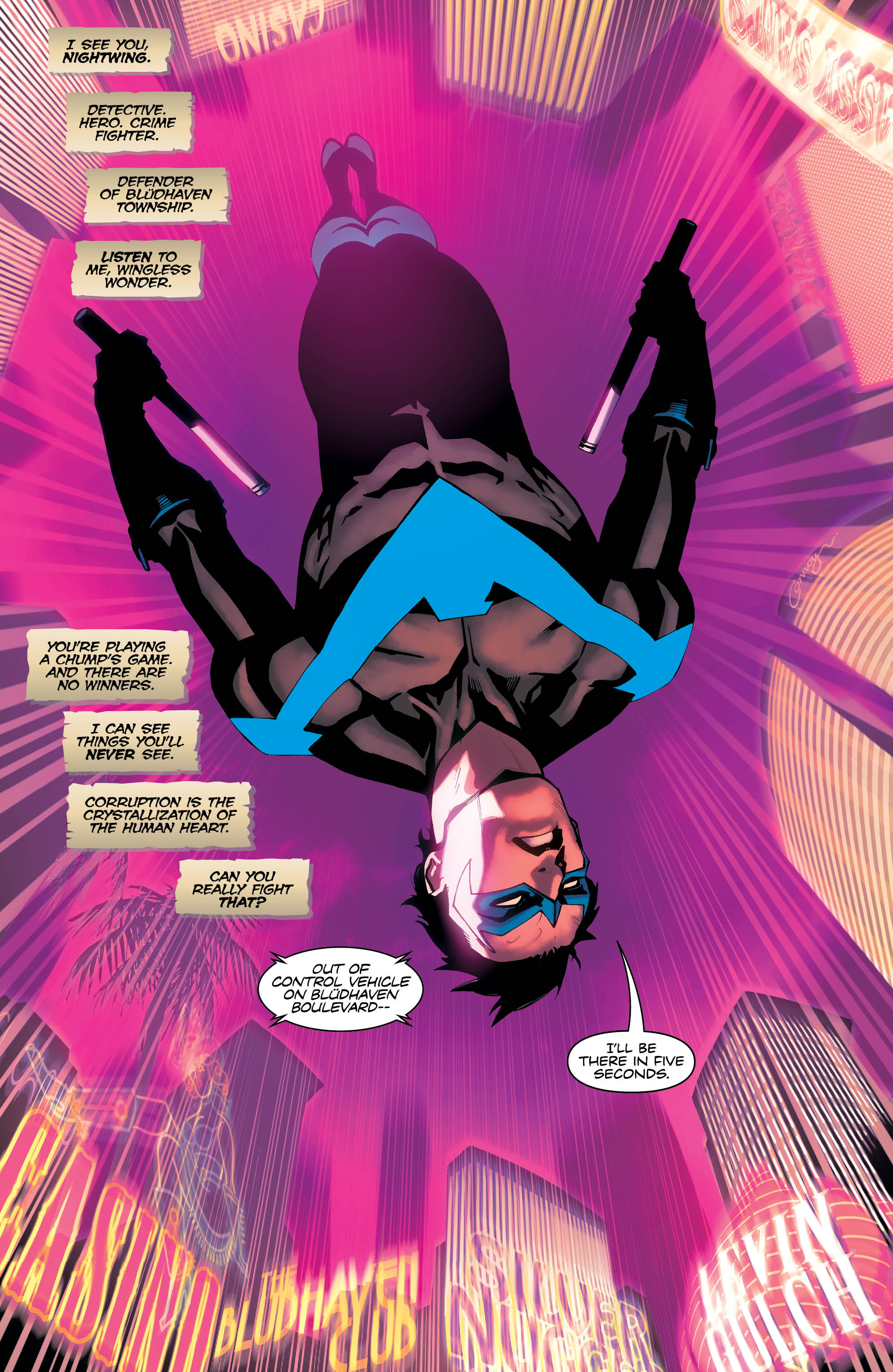 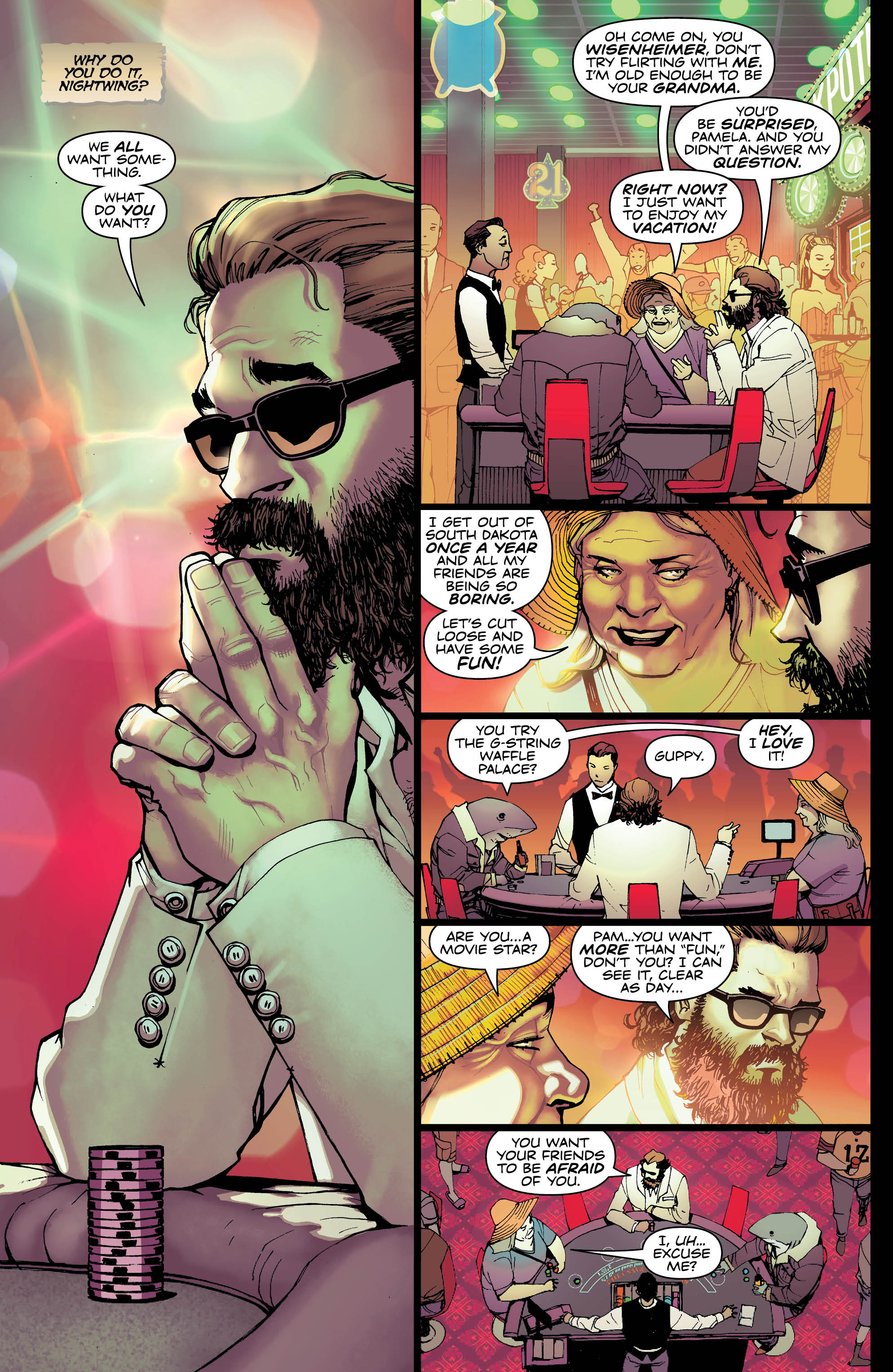 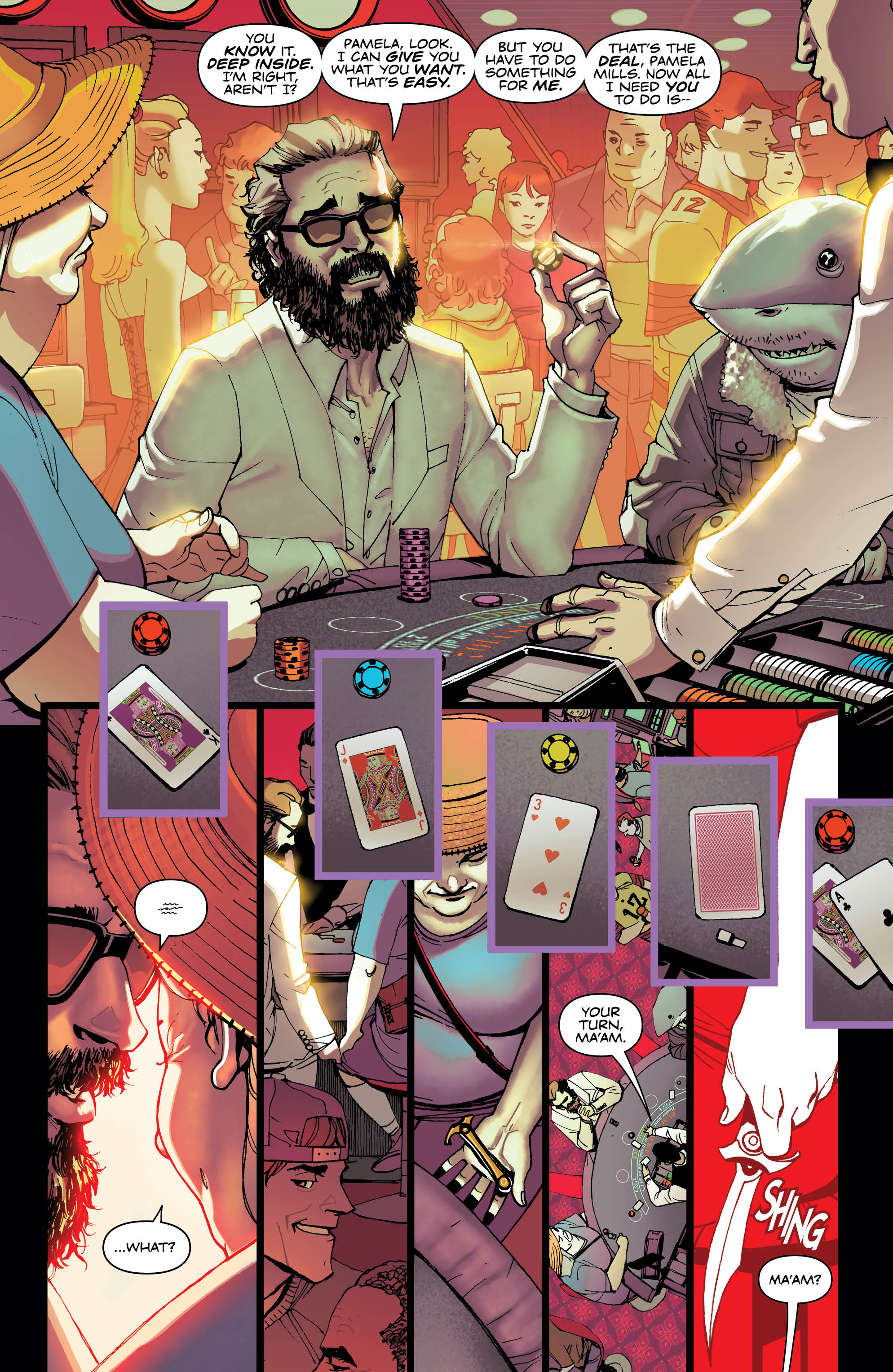 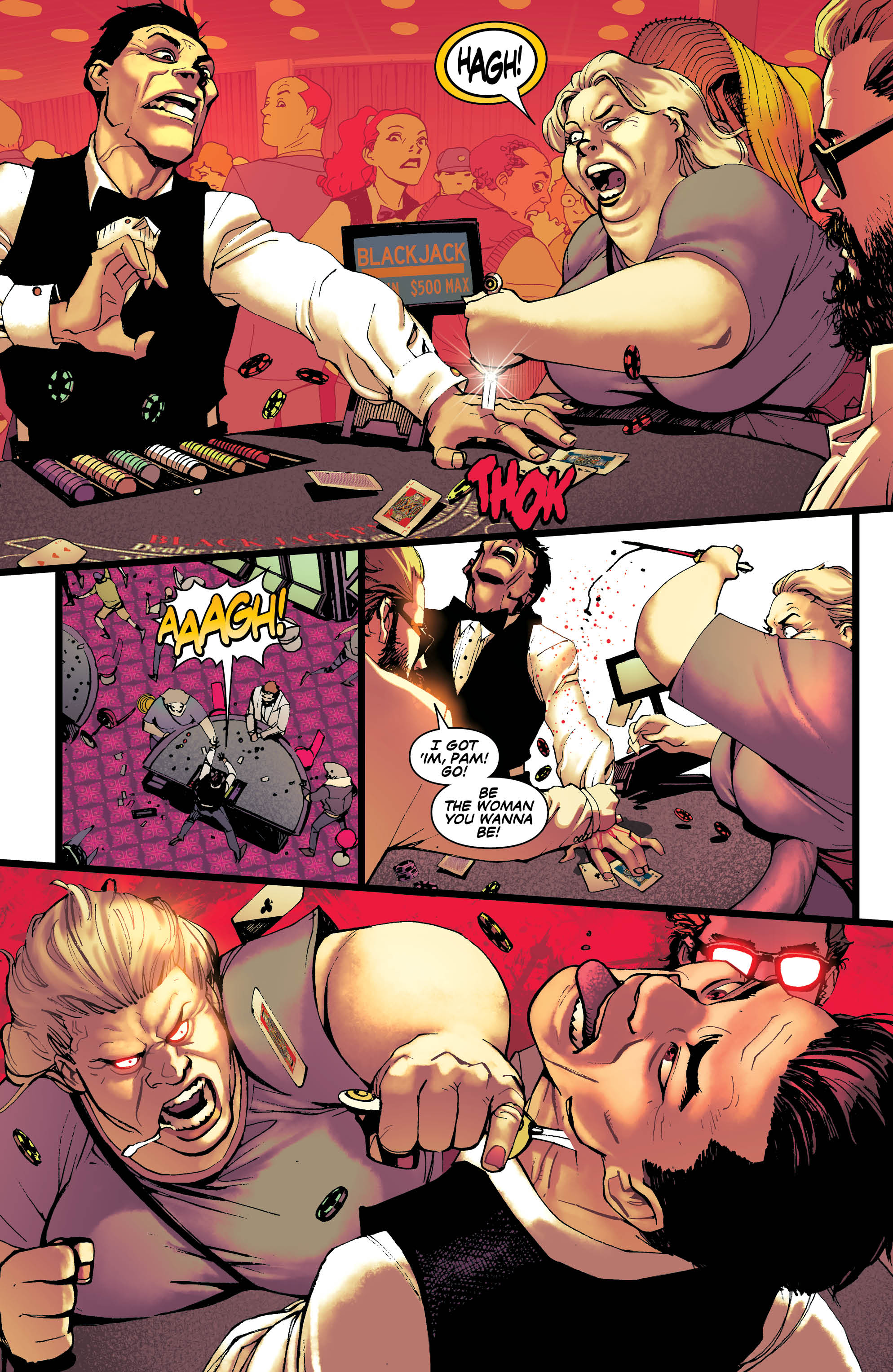 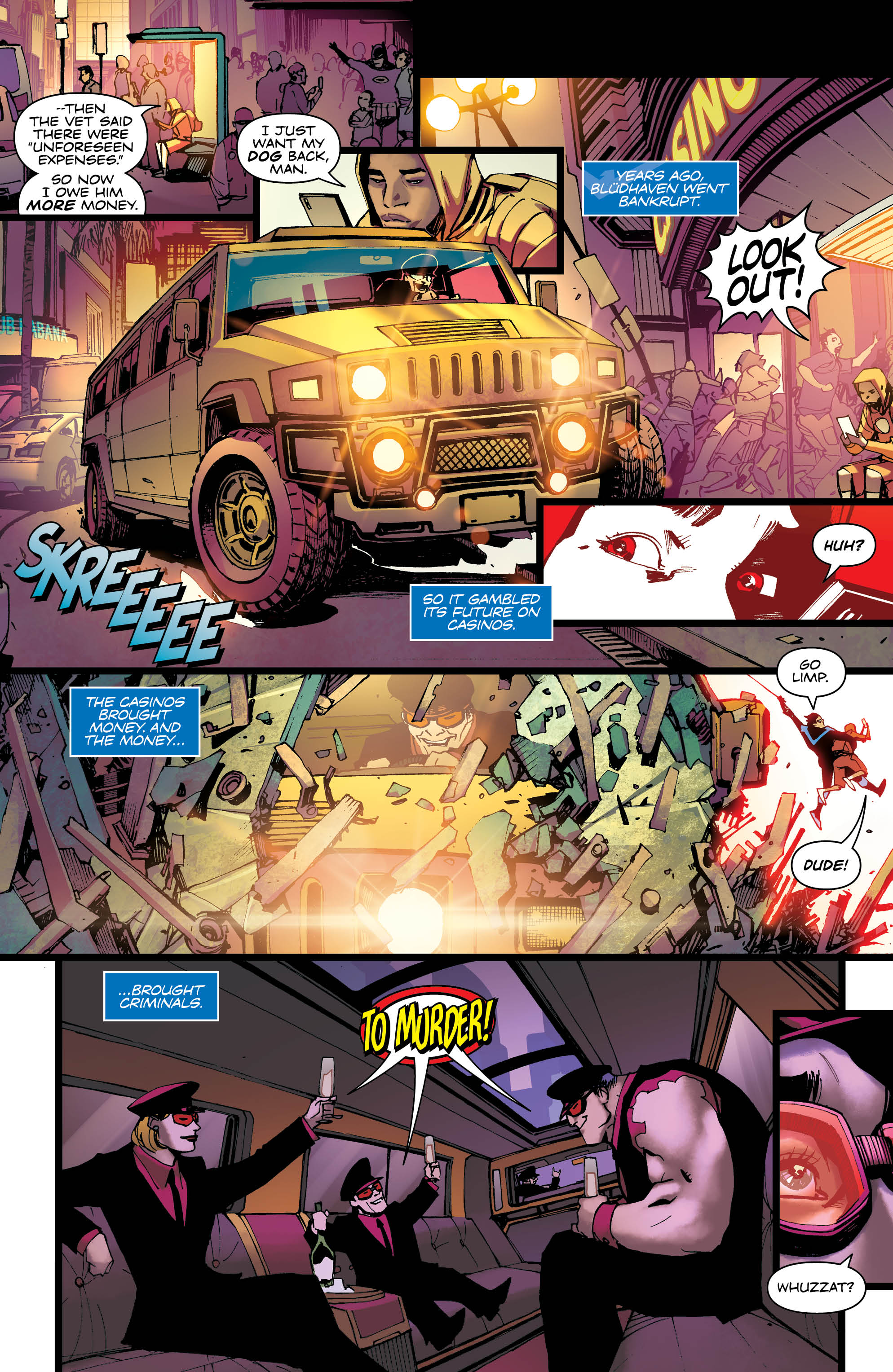 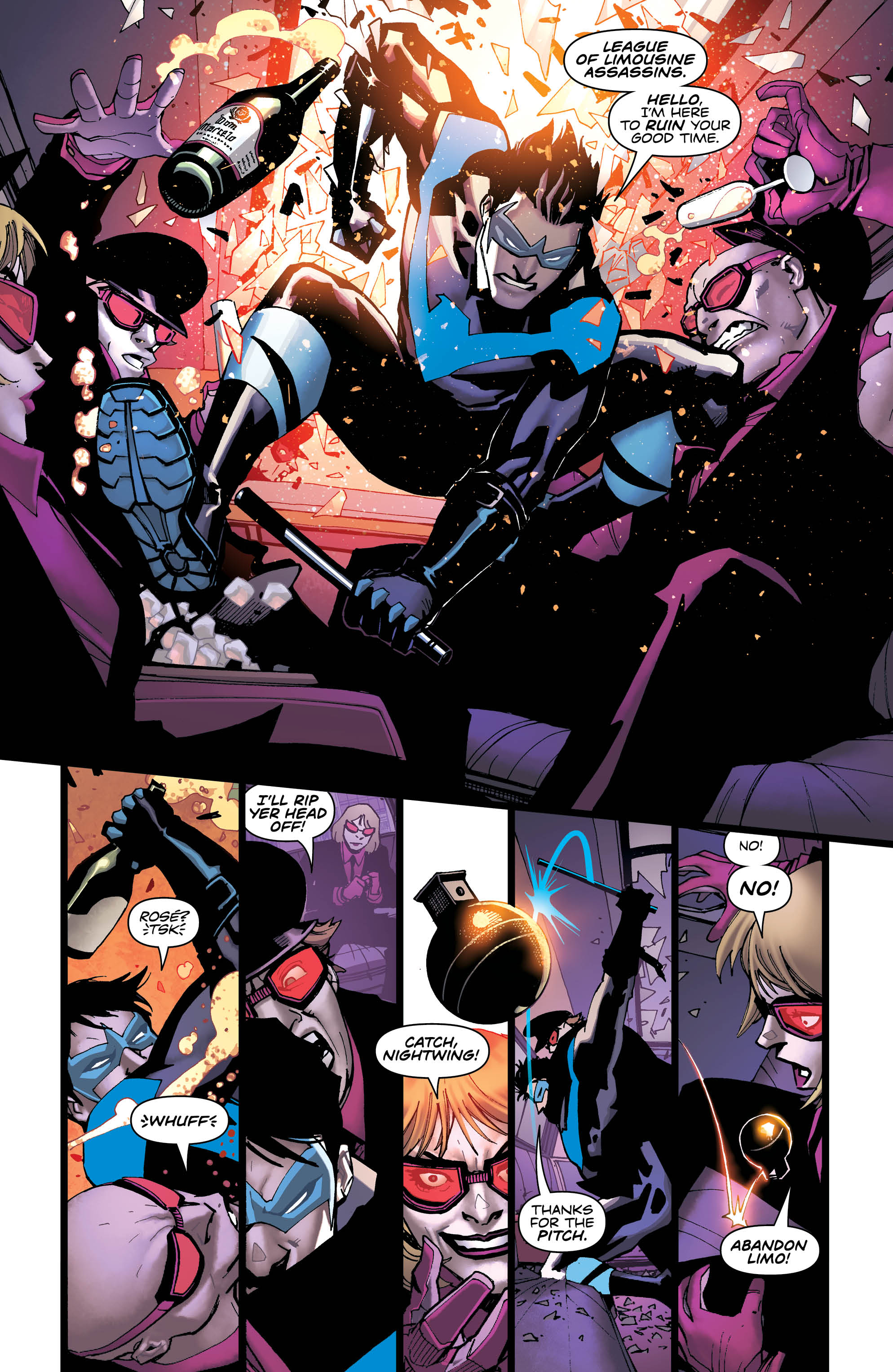 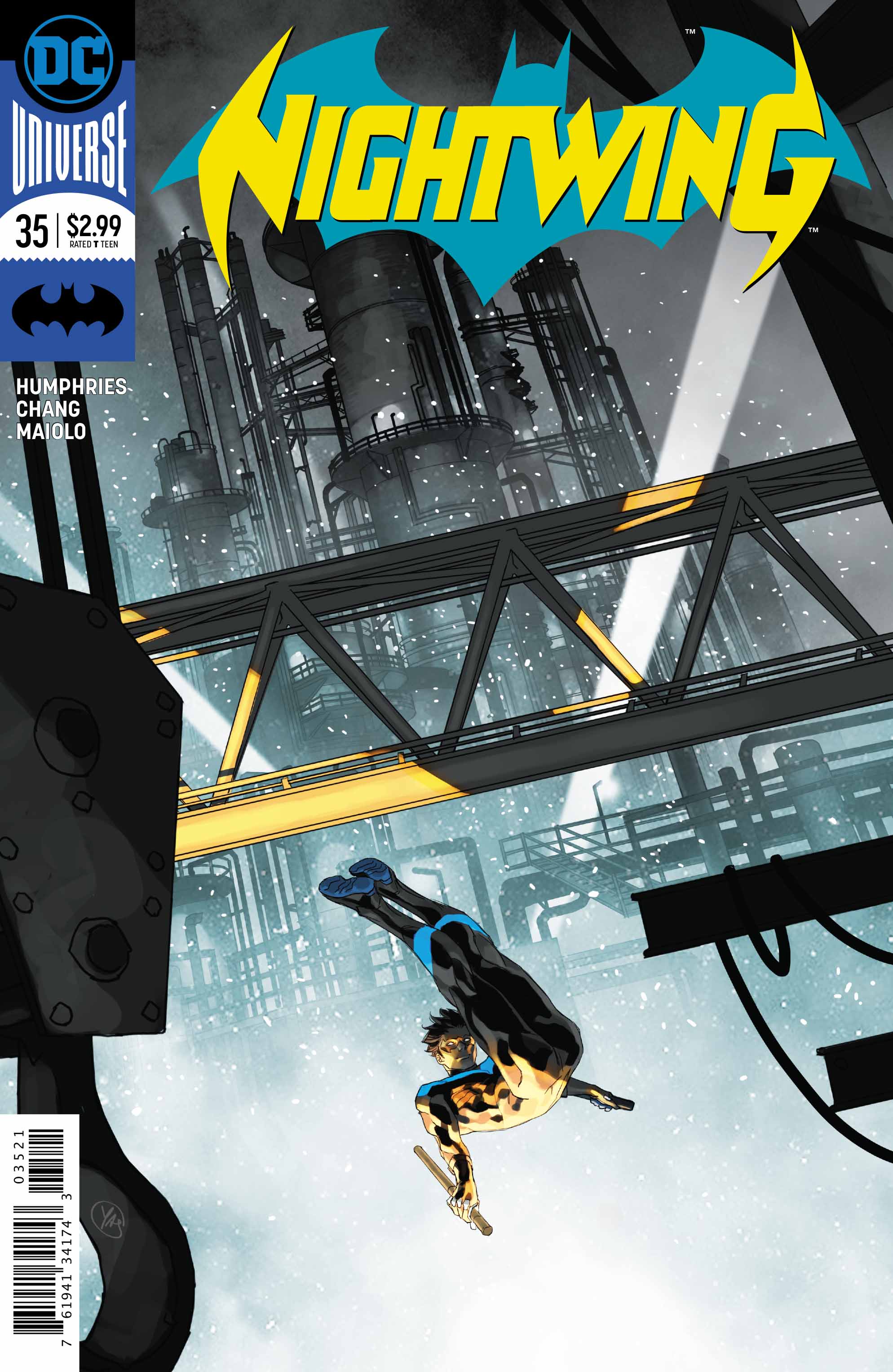 With a new issue, comes also a new artist. I’m happy to say the rest of issue 35’s artwork still holds up, mostly. Bernard Chang collaborated closely with Sam Humphries to create a new distinct look for Nightwing #35. Their dedication for crafting a unique identity for this issue was prominent throughout the comic. Bernard Chang’s artwork suited brilliantly with the more personal and grounded direction the series is walking toward. His penciling was enhanced even further by Marcelo Maiolo’s amazing coloring, whom I’m so happy stayed onboard.

There were times where I thought the artwork dropped in quality. Some panels looked better than others, which consequently rendered the artwork inconsistent.

Nightwing #35 marks a wondrous series debut for Sam Humphries and Bernard Chang. Both of whom have put a lot of passion and hard work in faithfully realising the titular hero. Rest assured, the series is in good hands. 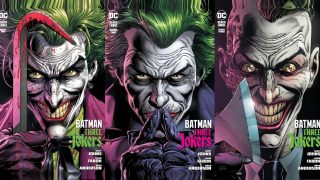