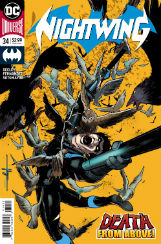 At last! After 5 issues, the “Raptor’s Revenge” story arc has finally come to its conclusion! The previous issue finished off with a foreboding panel of the titular villain, Raptor, and his romantic partner/accomplice Pigeon, surrounded by a horde of blockbuster serum carrying birds. This marked the final stage of Raptor’s master plan; infect every citizen within Bludhaven and transform them all into mindless “pseudo-blockbusters,” ultimately tearing down the city in the process.

Nightwing teams up with Roland Desmond/Blockbuster to thwart Raptor’s plan and defeat him once and for all. Meanwhile, the Run-Offs, a group consisting of former villains, work to cure the already infected victims.

Nightwing #34 delivers a lot of talking, fighting and talking while fighting. I do admit the comic can get very wordy and even heavy-handed at times. One key example is Pigeon’s exaggerated monologue revealing her rather unsettling, sinister side. 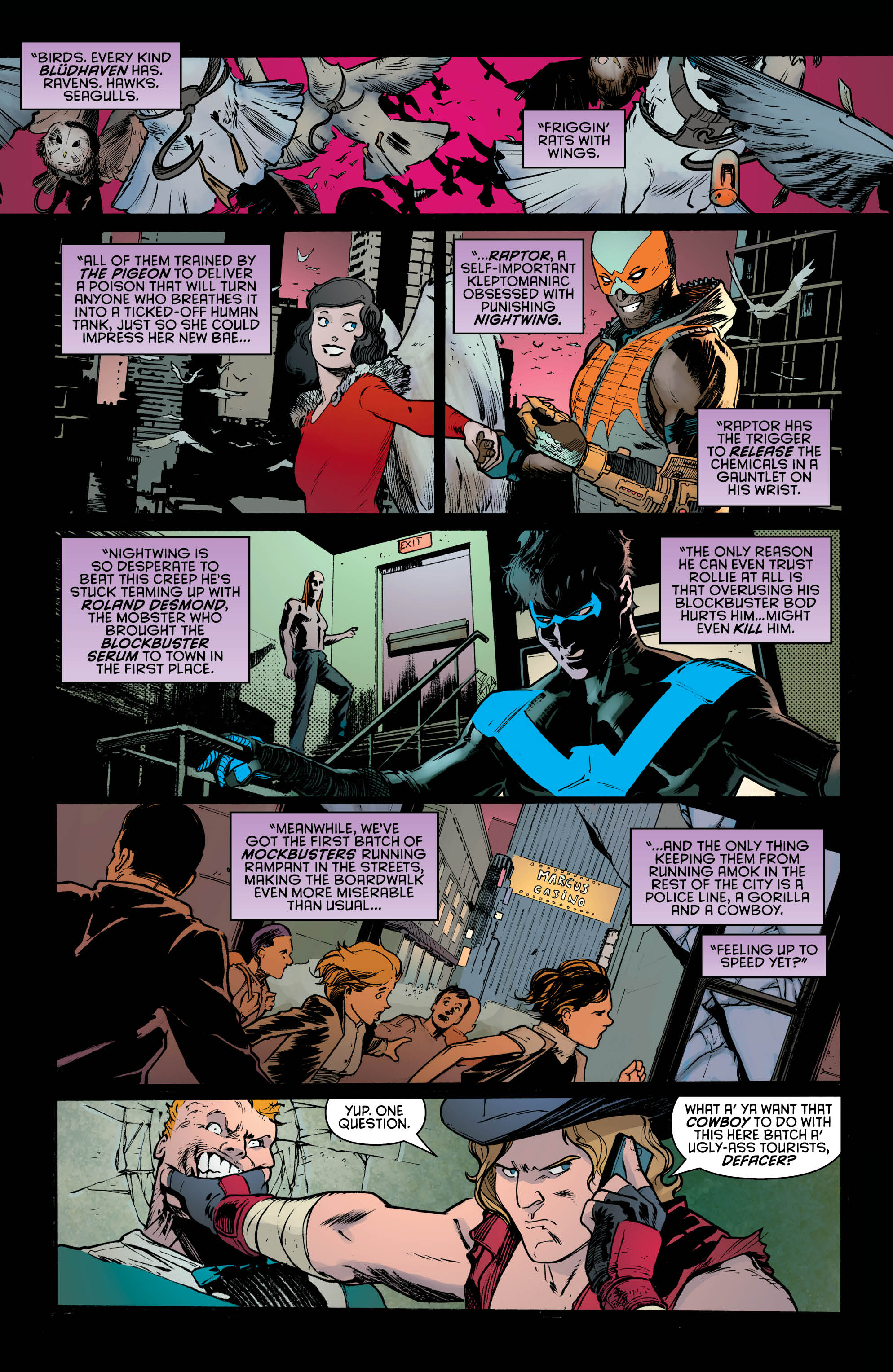 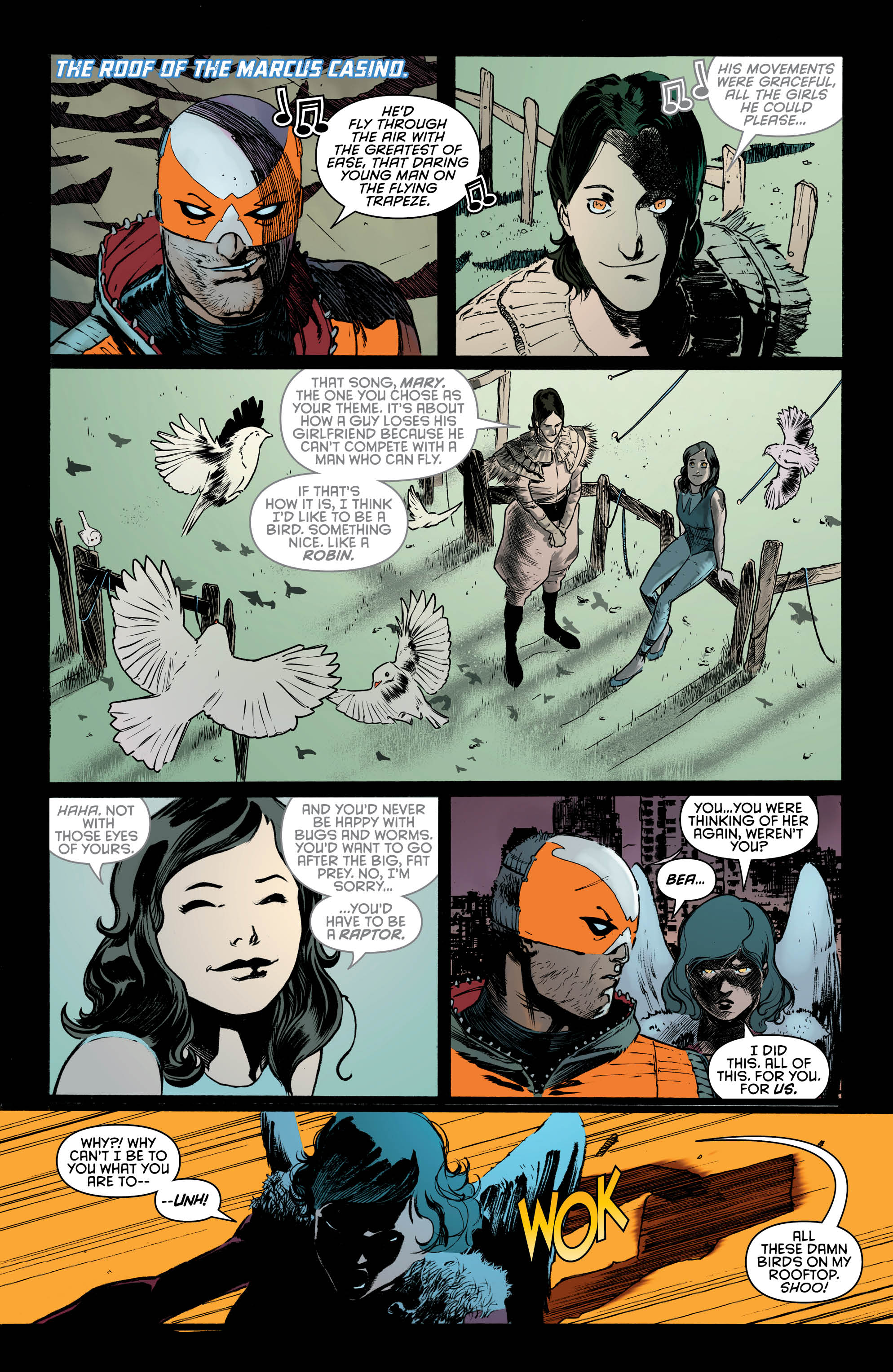 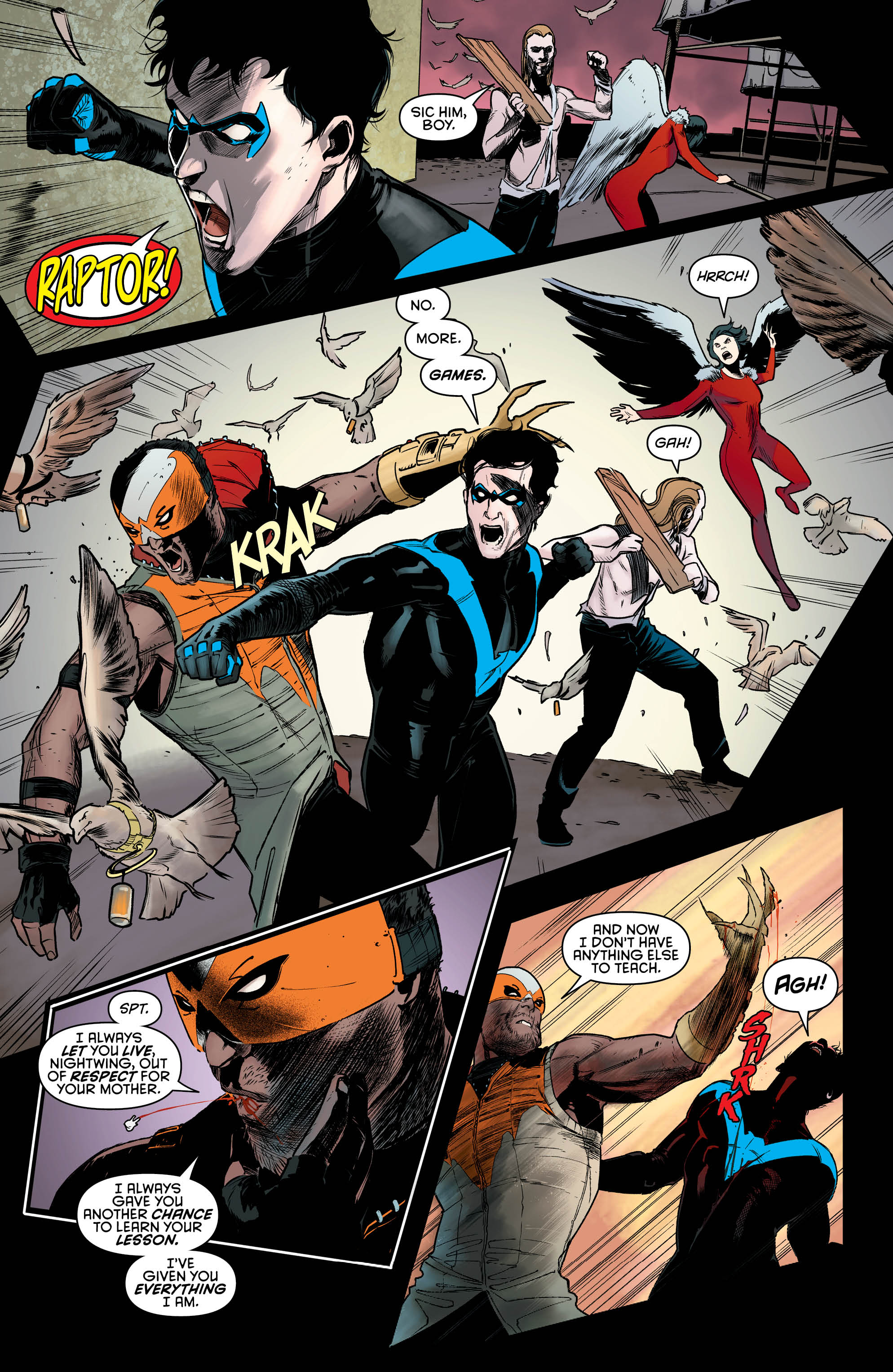 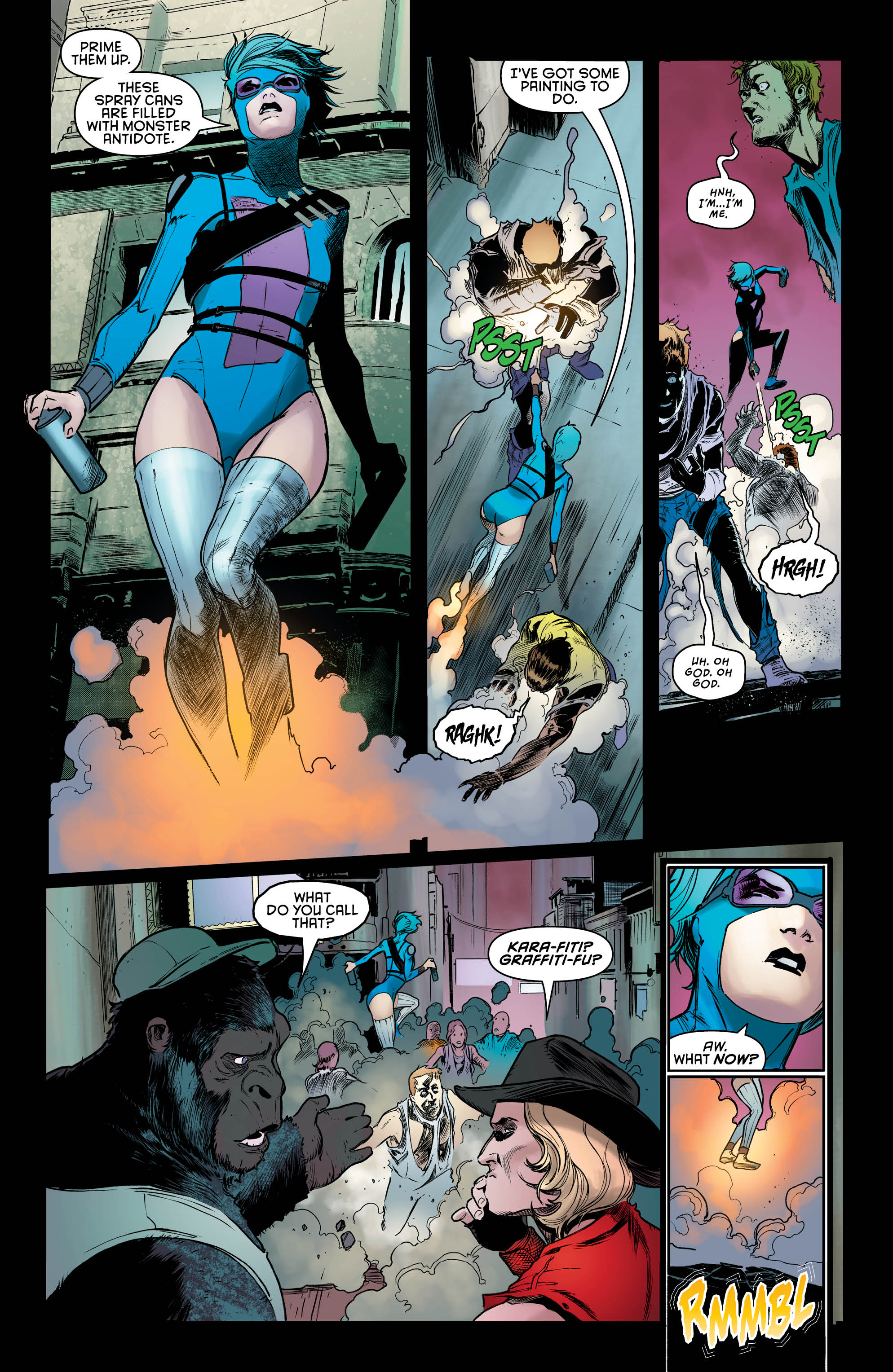 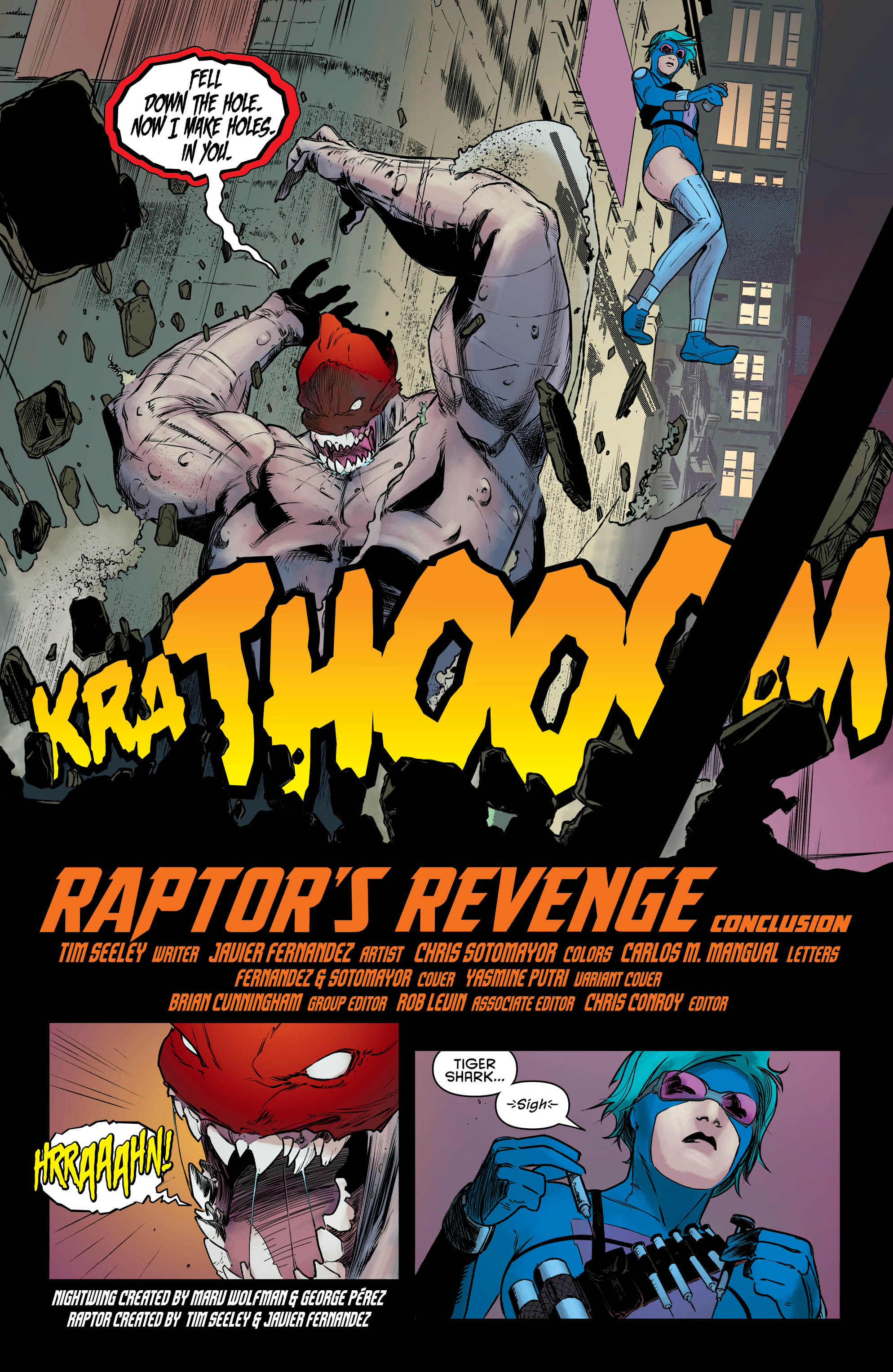 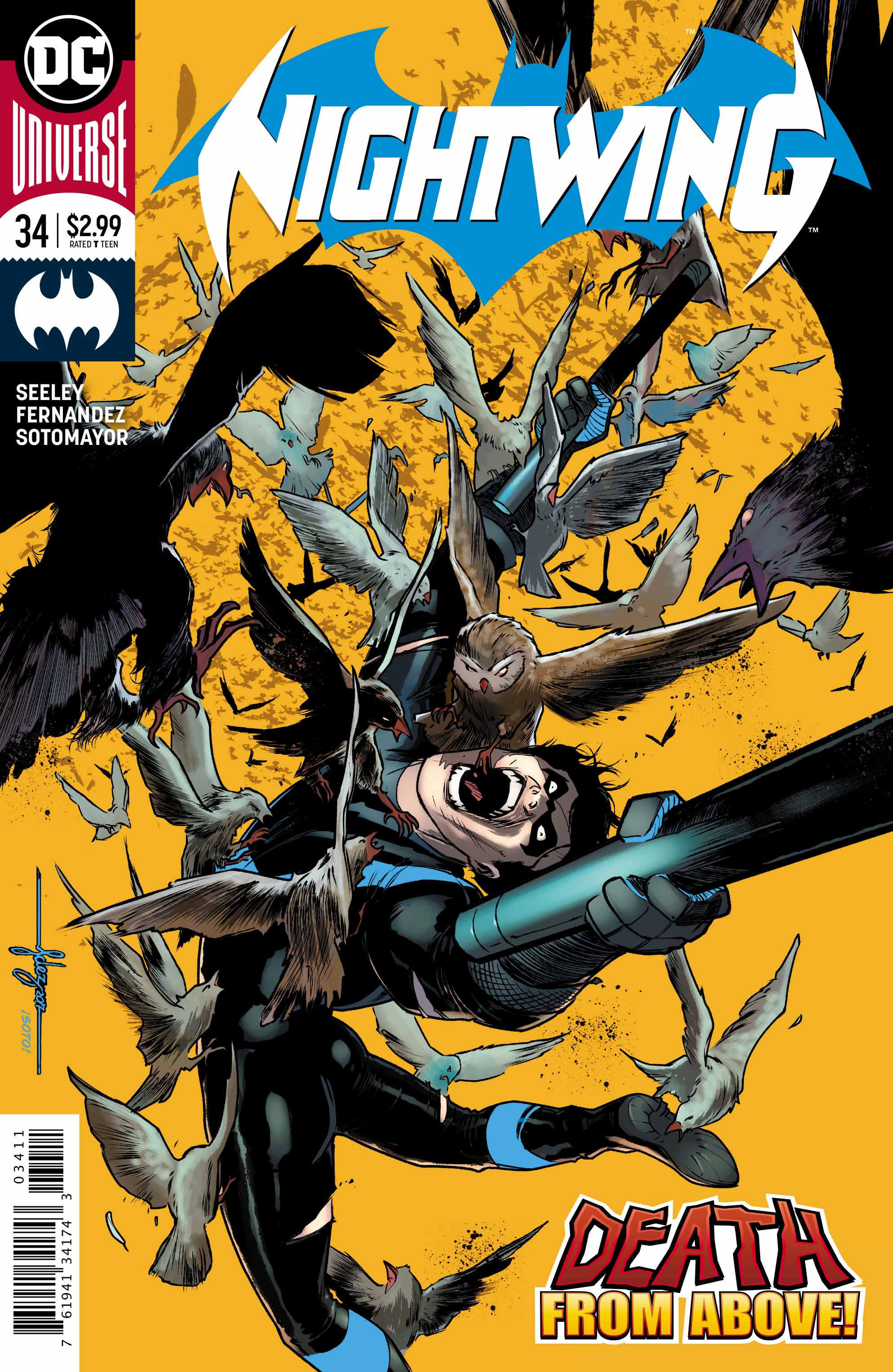 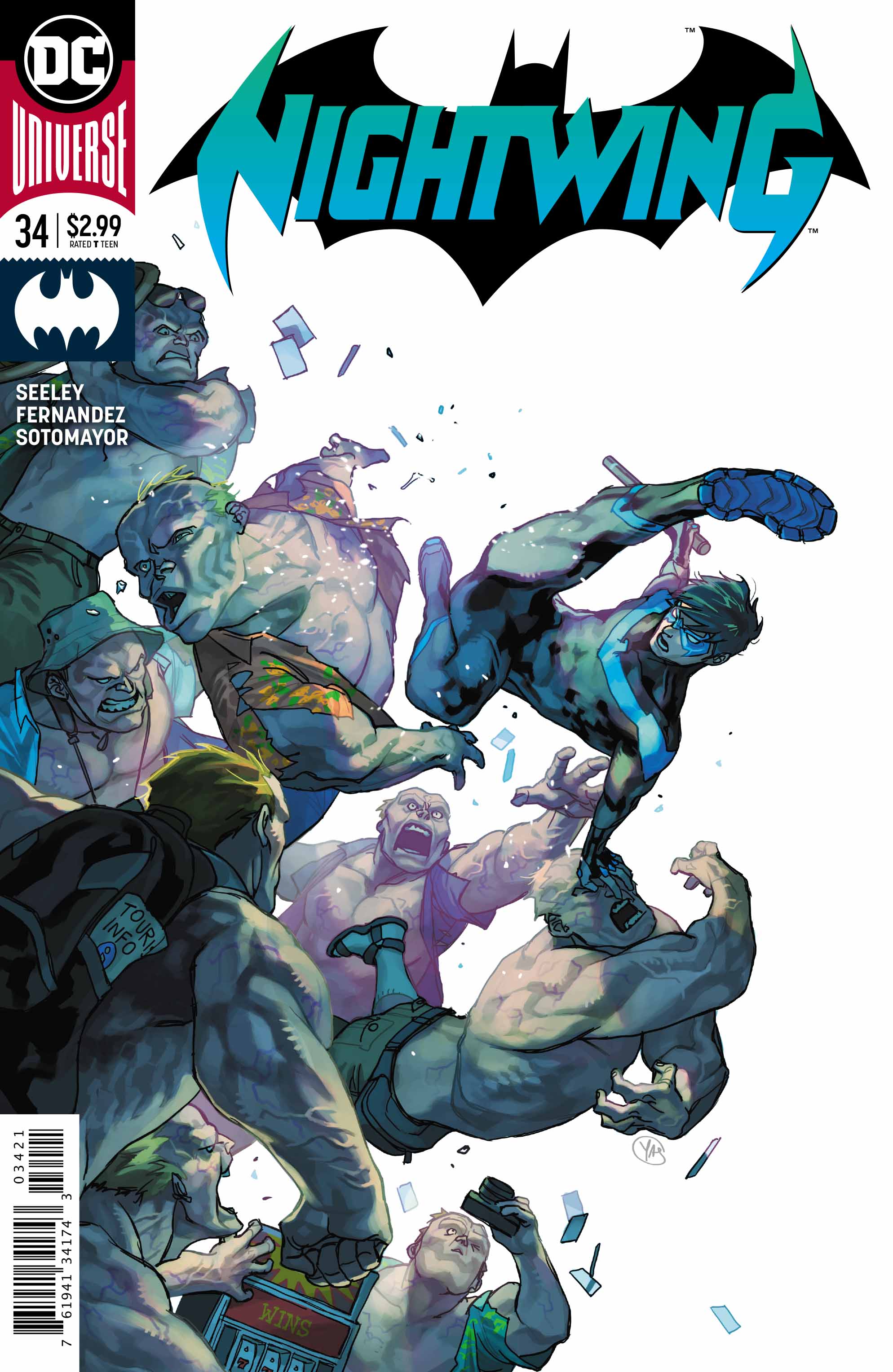 My absolute favourite moment in the comic was the inevitable and climatic fight between Nightwing and Raptor. The fight sequence was fluently translated via the panels. Every punch, slash, kick and grapple flowed seamlessly from panel to panel. This was the fight Nightwing fans were waiting for, and it was totally worth it. Raptor definitely proved himself to be a deadly and formidable foe against Nightwing.

Javier Fernandez’s distinct art style once again emulates the frenetic energy of this issue and the epic brawl. The art style was greatly enhanced by Chris Sotomayor’s clever coloring.

Frankly, I found the ending of the “Raptor’s Revenge” story arc to be quite underwhelming. This mainly stems from the lack of significant consequences the previous issues were leading up towards.

Basically, the story arc ends with Desmond delivering a massive, bone-crushing, Blockbuster-infused punch to Raptor’s skull. Raptor is then left in a paralysed, contorted state. He soon dies afterwards, but not before revealing his true name to Nightwing.

Then, out of nowhere, Desmond offers to let Nightwing stay in Bludhaven only if Nightwing joins Desmond and rule Bludhaven together, thereby negating and forgetting Nightwing’s earlier ultimatum involving him leaving Bludhaven forever. At first, it actually looked like Nightwing was accepting Desmond’s offer. However, Nightwing gets the upper hand on Desmond and injects him with the antidote to the Blockbuster serum, preventing Desmond from transforming into Blockbuster ever again. We then never hear from Desmond again. Literally, he doesn’t appear or is mentioned again in the comic. During the aftermath of the blockbuster outbreak, Tiger Shark is also apprehended.

Nightwing then resumes his heroic escapades in Bludhaven.

On the whole, I found the “Raptor’s Revenge” arc to be admittedly forgettable. Aside from some thrilling action sequences, this issue proved to be relatively underwhelming.  Even an intriguing villain like Raptor didn’t really make the story arc largely memorable. Nothing really happens in the issue that significantly impacts the series.

The “Raptor’s Revenge” story arc ends on an entertaining yet underwhelming finale. Besides the re-emergence of Raptor, the arc didn’t really do anything impactful. It also didn’t help that the ending felt rushed. What Nightwing #34 did succeed in was the thrilling fight between Nightwing and Raptor. I honestly can’t think of anyone else as the writer of Nightwing other than Tim Seeley!