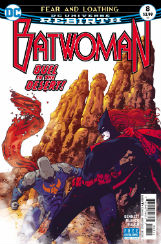 We return to the adventures of Batwoman in Batwoman #8.  In this issue, Batwoman’s mental fortitude is put to the test when she is captured by one of Batman’s nefarious foes – Jonathan Crane a.k.a Scarecrow.

The comic begins with the scarlet-haired vigilante being subjected to Scarecrow’s signature ‘fear toxin’ after the villain captured at the end of the previous issue. Batwoman wrestles with her own mind, as it’s now infested with disturbing psychedelic images. Meanwhile, Scarecrow is experimenting different with diseases (ebola, bubonic plague, anthrax) on various animals in his underwater laboratory. The purpose of his experiments is still to be revealed.

Oh man. Batwoman is put through the ringer in this issue.  I mean, issue #7 really tested our hero’s physical resolve trudging through the Sahara Desert. Now she must find a way to defeat a formidable villain who can turn her own mind an enemy.

The comic does not pull any punches and is not afraid to show how severe the toxin has affected Batwoman’s psyche. Throughout the comic, Batwoman witnesses some truly disturbing imagery. Such as her family being attacked by a humanoid black widow spider and dissipating into rose pedals while she calls out their names. The comic even shows her killing a giant bat.

Eventually our hero manages to awake from her toxin-induced nightmares and escapes her cell with an ally of her father’s, Colony Prime. However, before the pair escape their cell, Scarecrow subjects them to more gas. We soon learn that Scarecrow is actually in league with The Many Arms of Death. 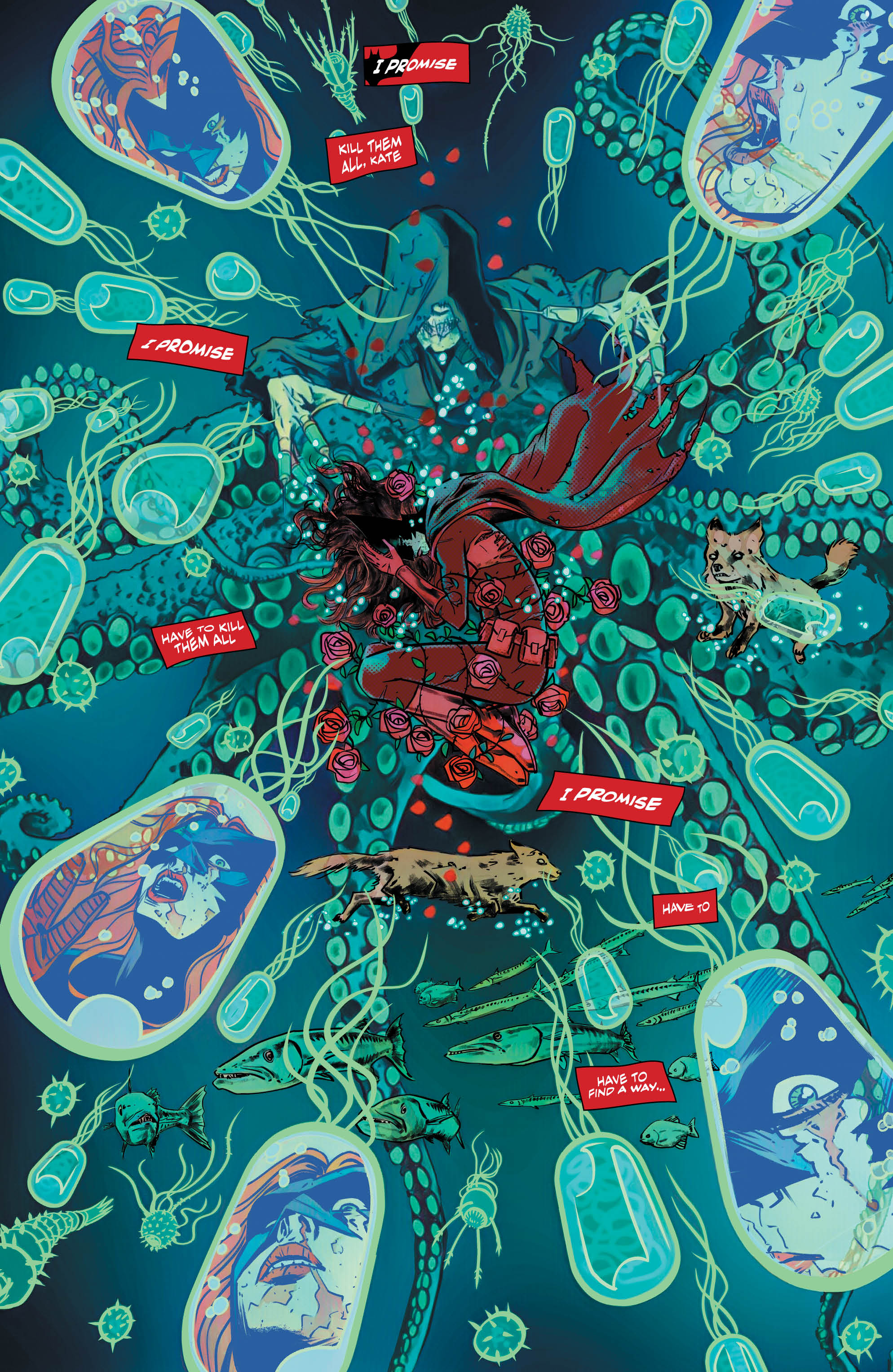 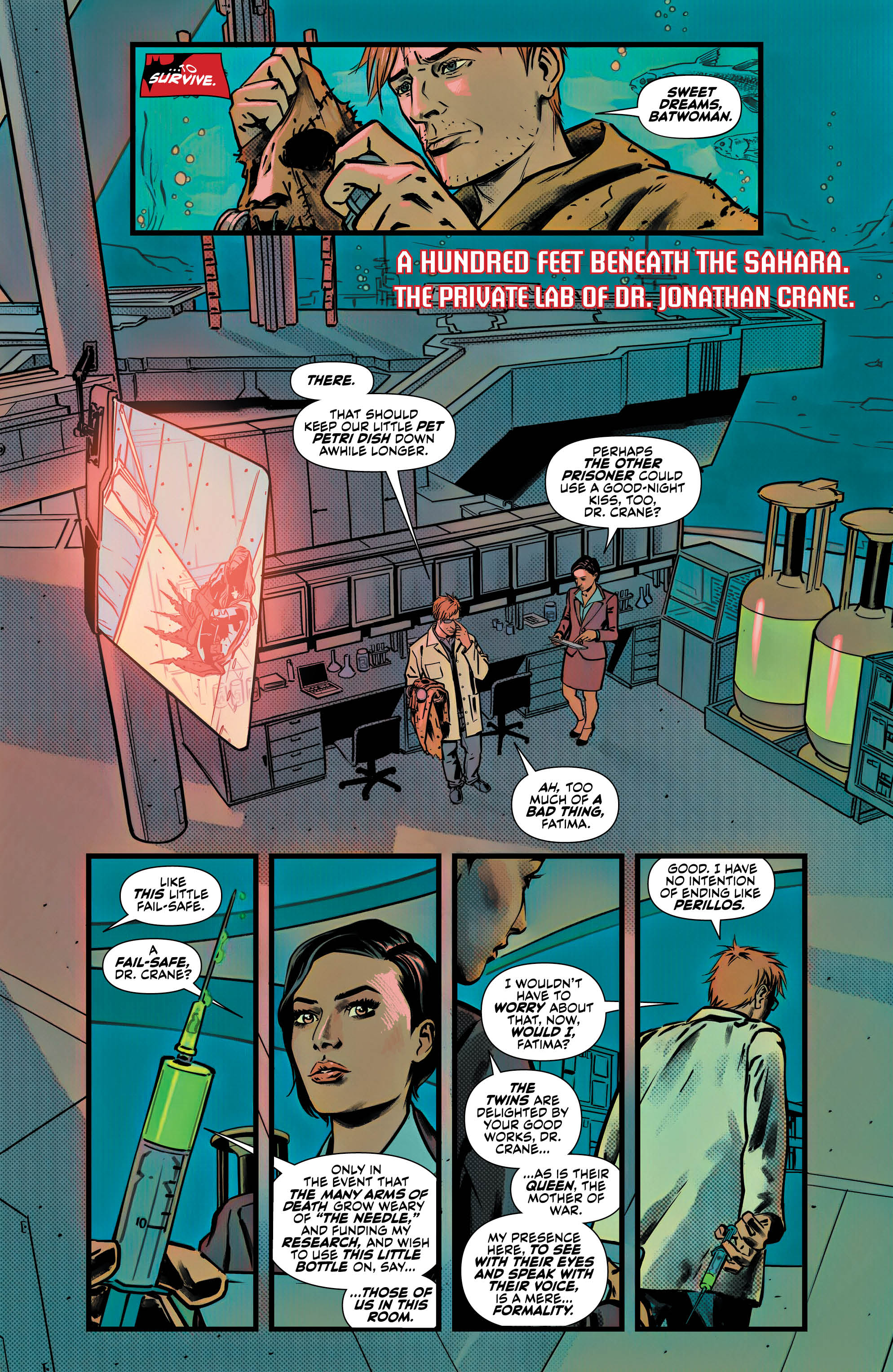 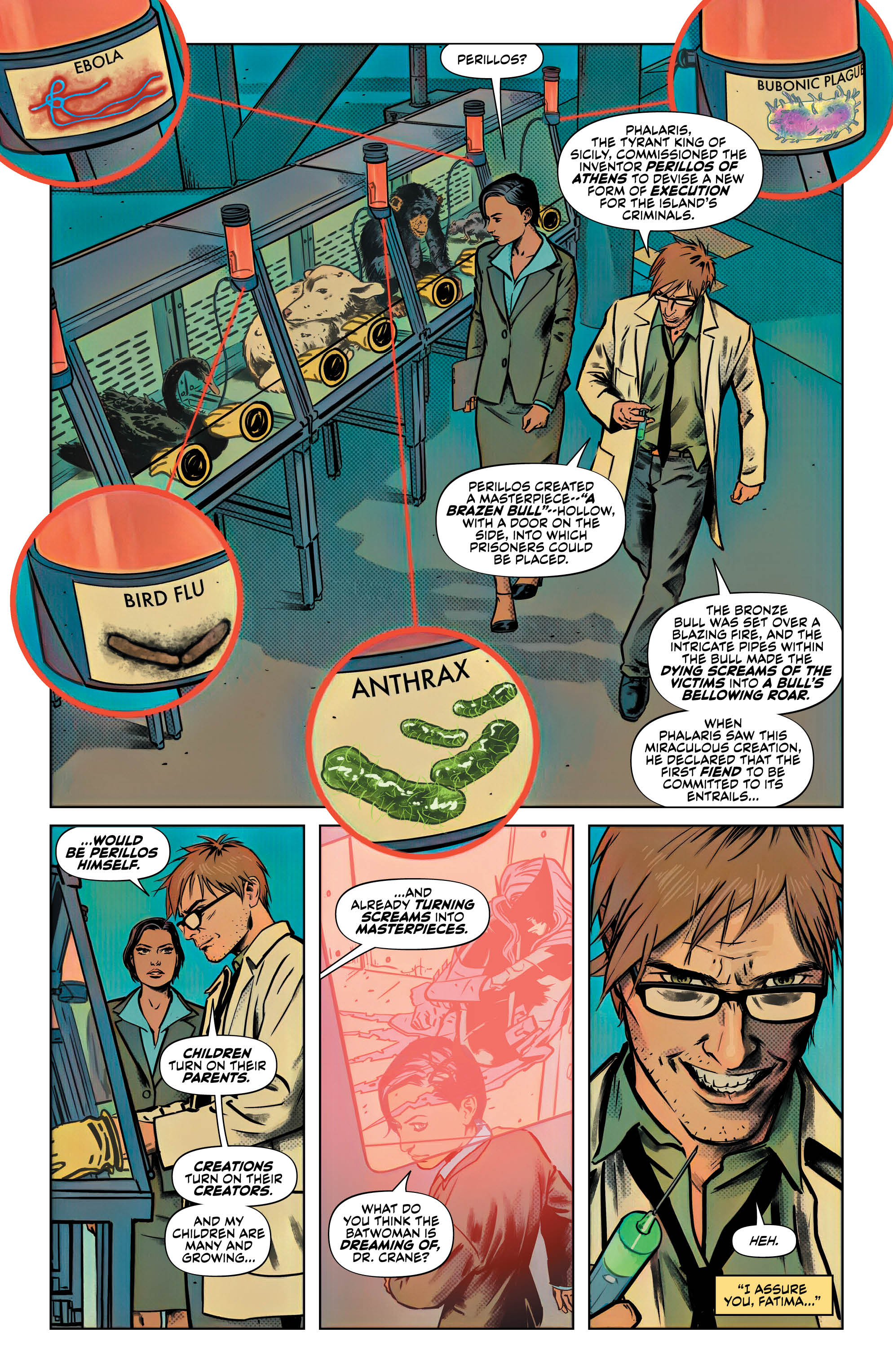 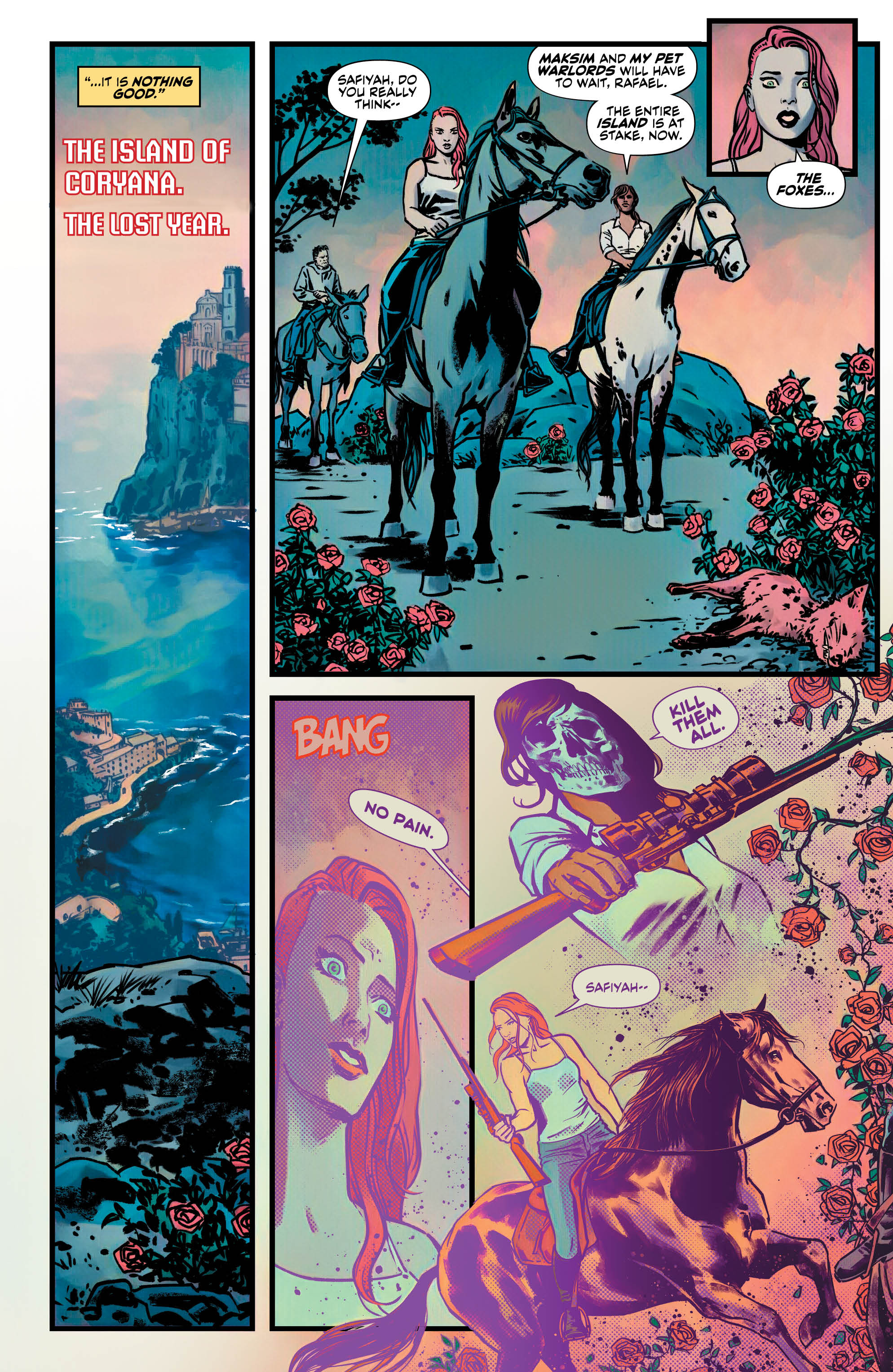 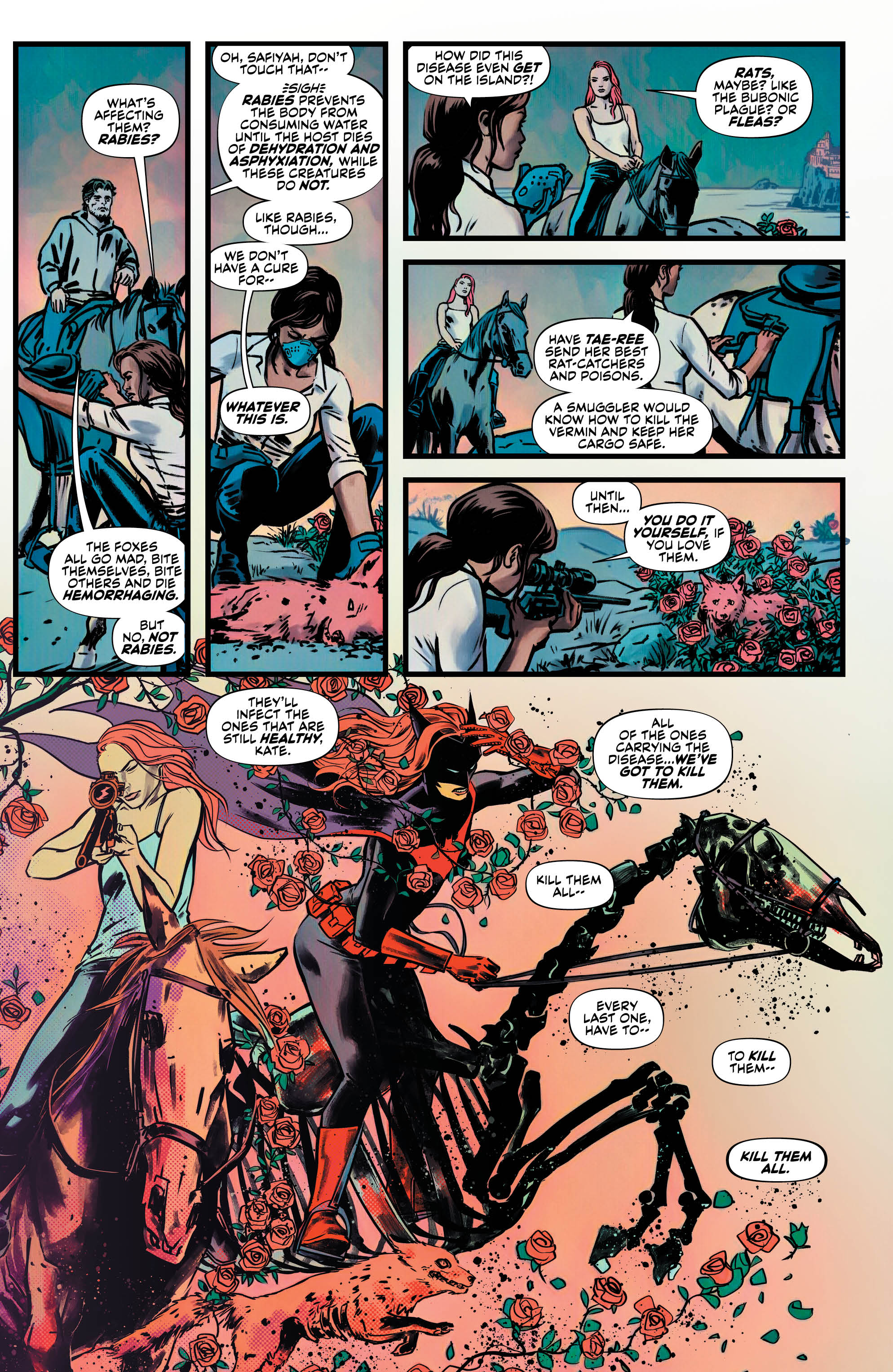 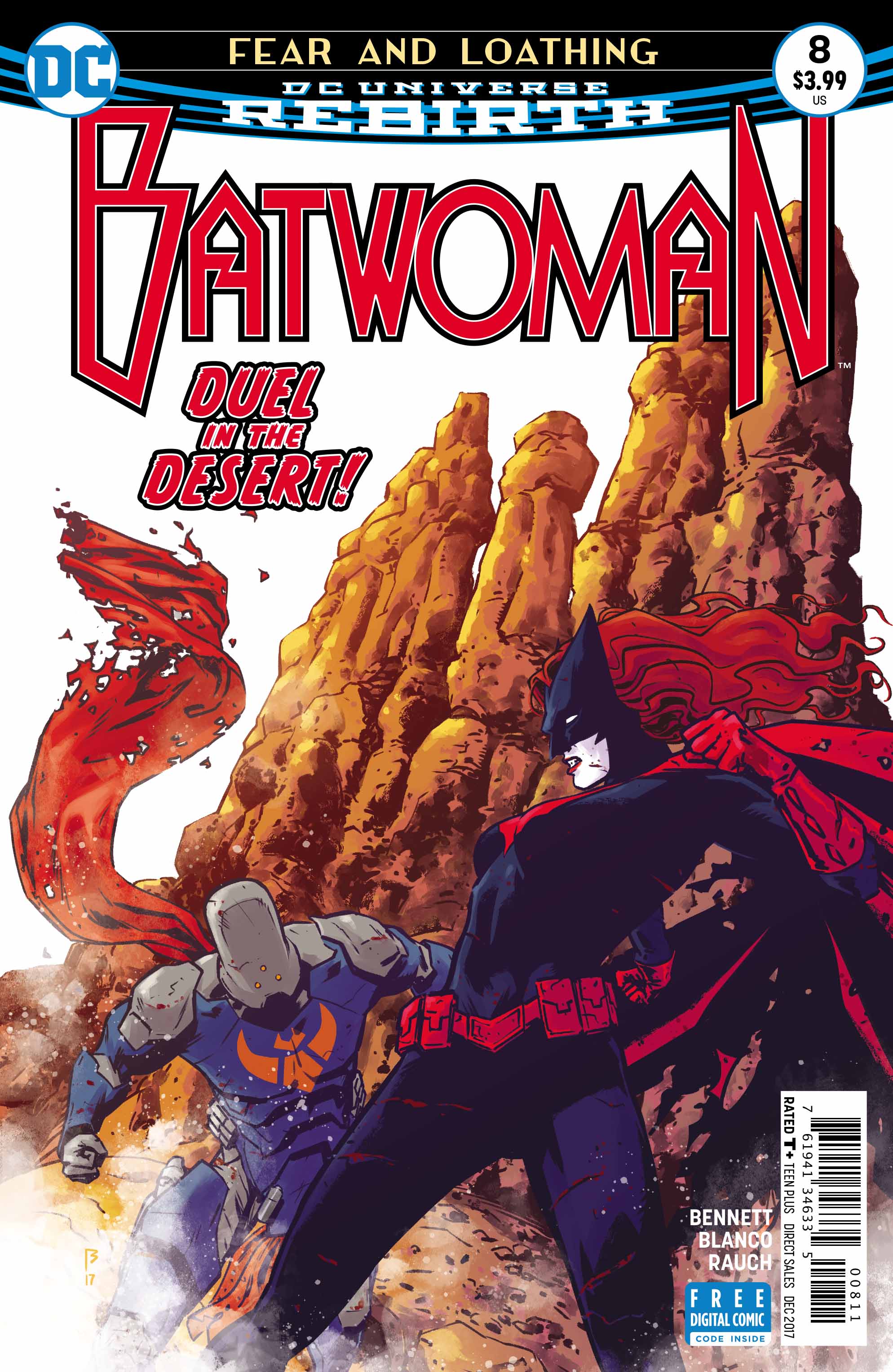 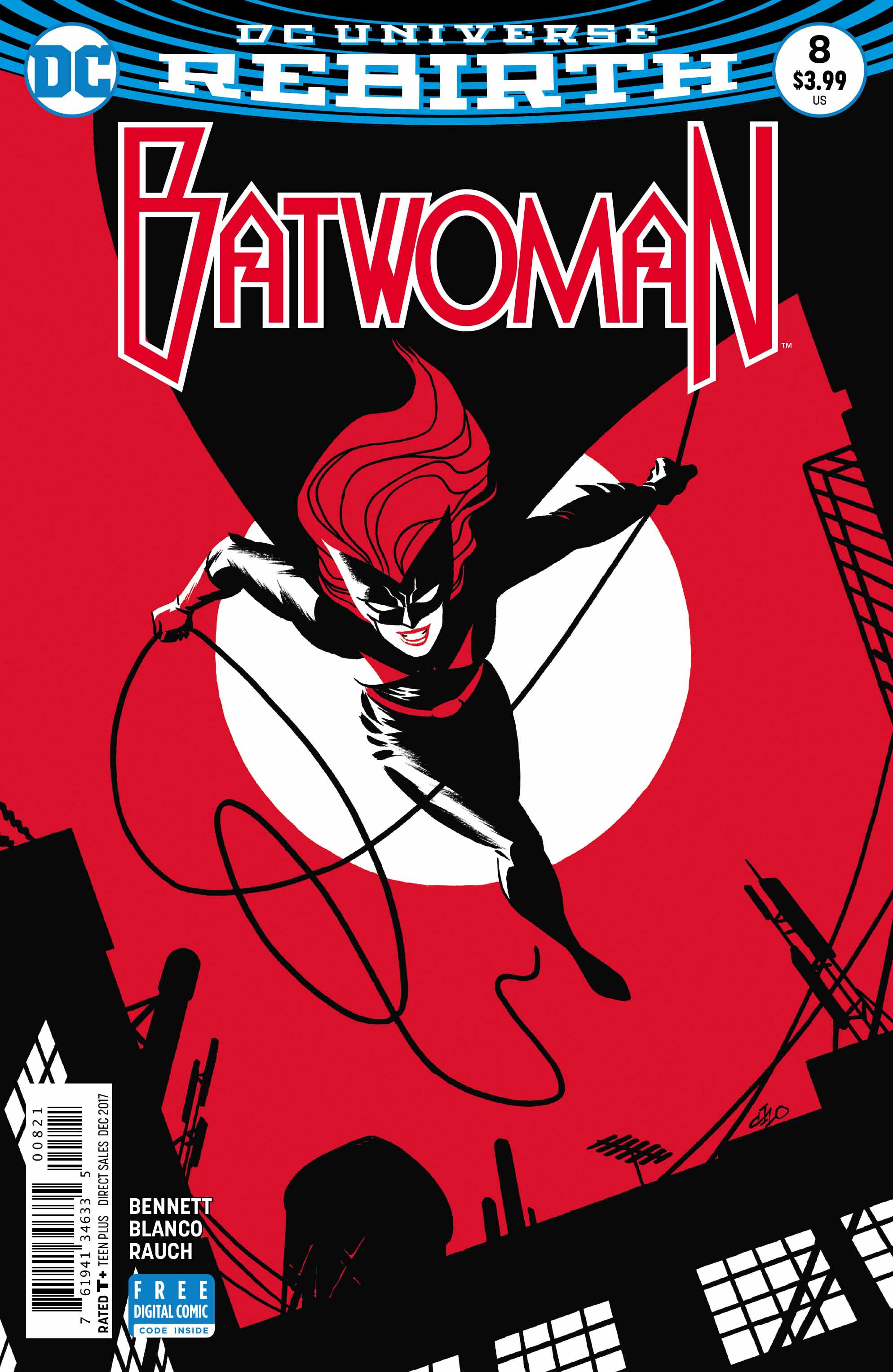 One thing I had to point out is that the comic moves along at such a frenetic pace. While the first fews pages are a bit wordy, I nevertheless found issue #8 to be very fast paced. This is likely due to the very minimal dialogue present in the comic’s latter portion. Once again, I highly appreciate Marguerite Bennett for keeping the writing to a minimum so the panels aren’t clouded by overabundant exposition. Issue #8 marks Marguerite Bennett’s second credit as sole series writer and I have to say she is doing an great job.

Man oh man, when I saw the first page and learned that Scarecrow was involved, I knew this comic would have some trippy artwork. The first page alone encapsulates the whole tone of the issue. This is all thanks to the brilliant Fernando Blanco and John Rauch. Their combined artisitic talents have helped realise the psychedelic and eerie tone of the comic. The moments where their artwork really stands out is in Batwoman’s toxin-induced nightmares. Those segments are truly the stuff of nightmares.

Although I still wish to know more about Scarecrow’s motivations, I really enjoyed issue #8. Wonderful yet eerie artwork, a formidable foe and Batwoman’s internal struggle with her mind made for a thrilling story and I can’t wait to know what happens in the next issue.