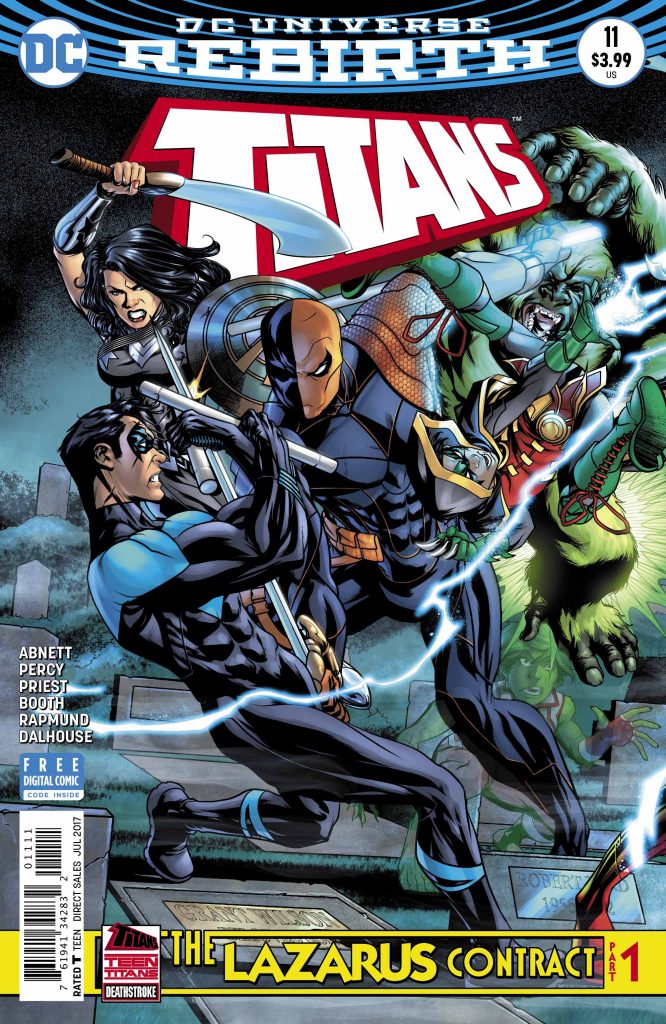 The time is finally here! I remember reading the solicitations a little while ago and seeing this event announced. I was immediately interested and excited – Deathstroke and the Teen/Titans would be coming together at last! “The Lazarus Contract” sounded like the event I – as well as many other fans – had been waiting for and, with part one here, it turns out we were right. For those of you who may not be fully aware of this crossover, below is a run-down that features the four covers all put together to make one awesome picture. Check it out! 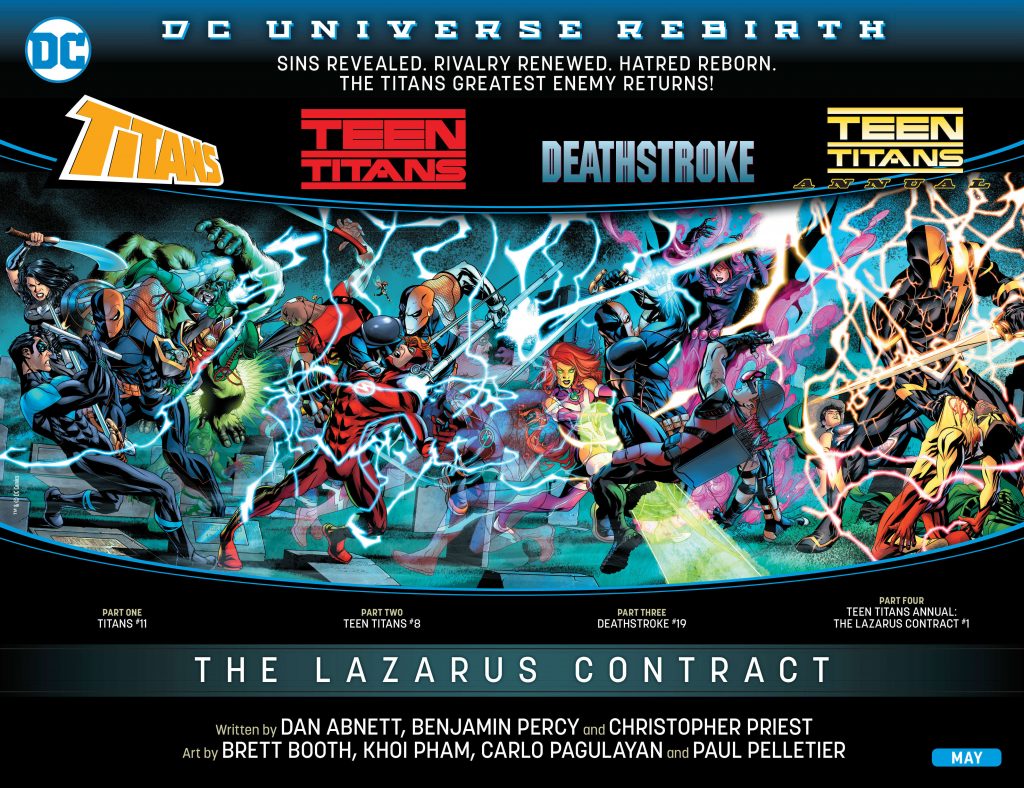 What lay inside Titans #11 was a solid opener for this exciting arc. As someone who has been reading Titans, Deathstroke and Teen Titans from issue one, to see it all slowly coming together in this issue – and over the next three parts – is amazing. The overarching story is written by the three writers of the series involved (Abnett, Priest and Percy) but each issue is written and drawn by the creative team for that book. What we get then from part one is a well-structured and well-executed story that sets up the necessary threads, but also could be a good jumping on point for new readers. That being said, before I continue with the good stuff, I want to bring up my one small issue with this book and this crossover in general.

As mentioned, I have been reading the three series involved since day one, so I am well aware of the happenings every two weeks/month when they come out. I know some people may only follow one or two of these books but still jump into this crossover out of interest or necessity, and that’s where I take slight issue. A lot of this arc has been set up over the course of  the Deathstroke series, and the opening scenes of this book with Slade (as well as his entire motivation for the crossover) refer back to the “Twilight” arc that’s just wrapped up in that book. So in that sense, it leaves a lot to be desired in terms of backstory. That being said, it’s a brilliant way for readers to go back and read the Deathstroke run, and I would definitely recommend that because it’s been insanely good, but it’s definitely something to be wary of. With that one slight issue out of the way, let’s jump back to it! 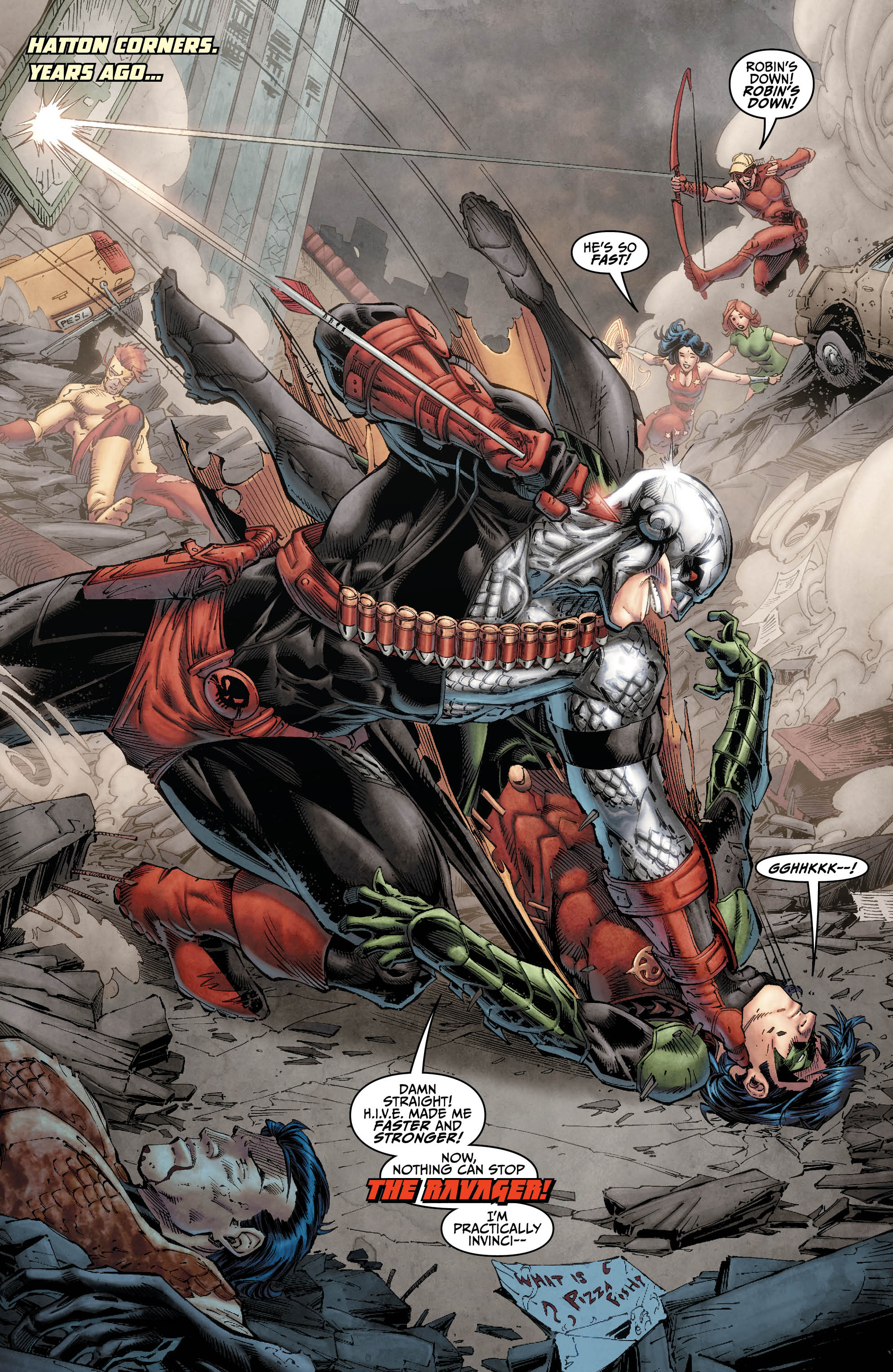 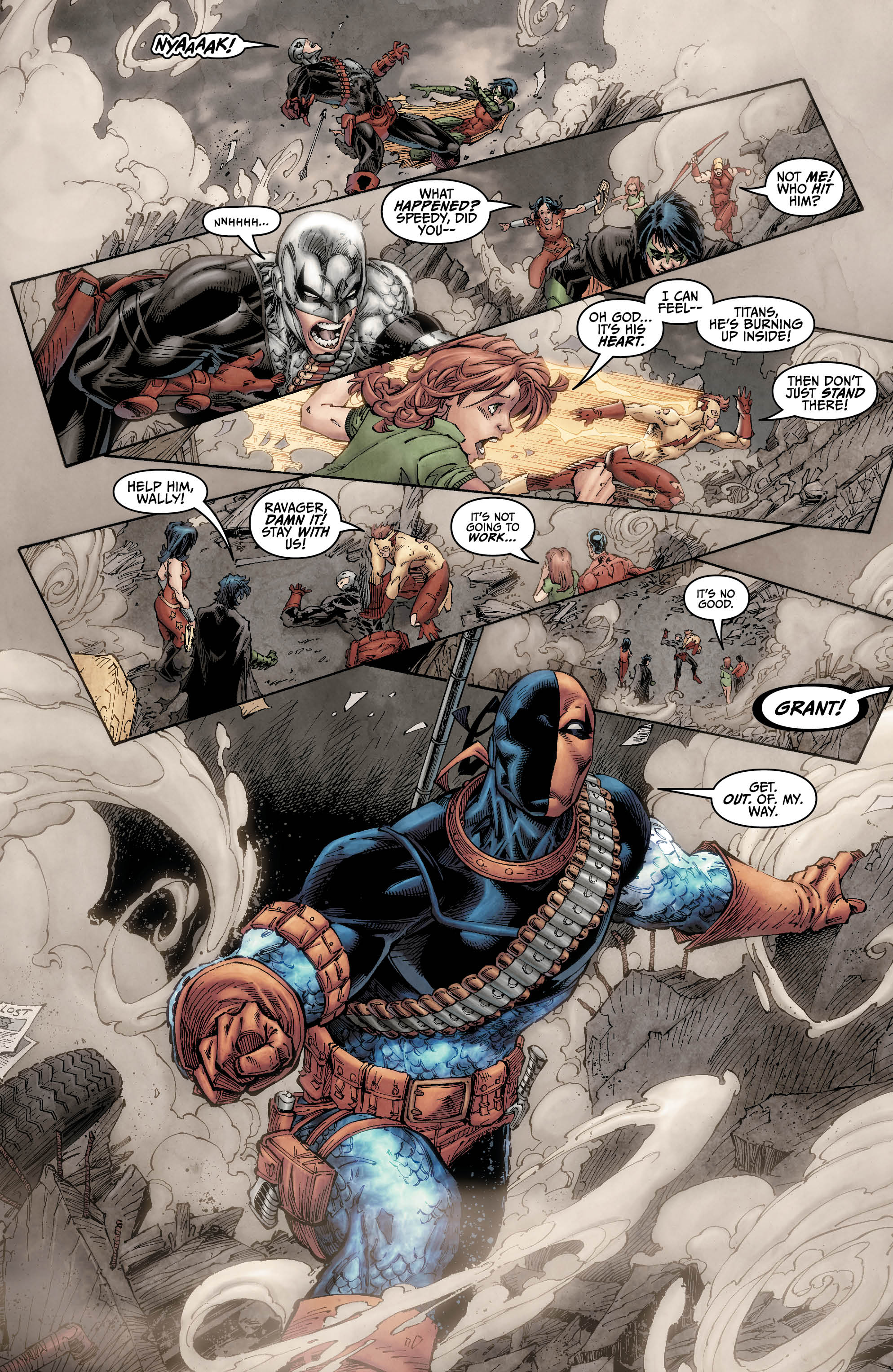 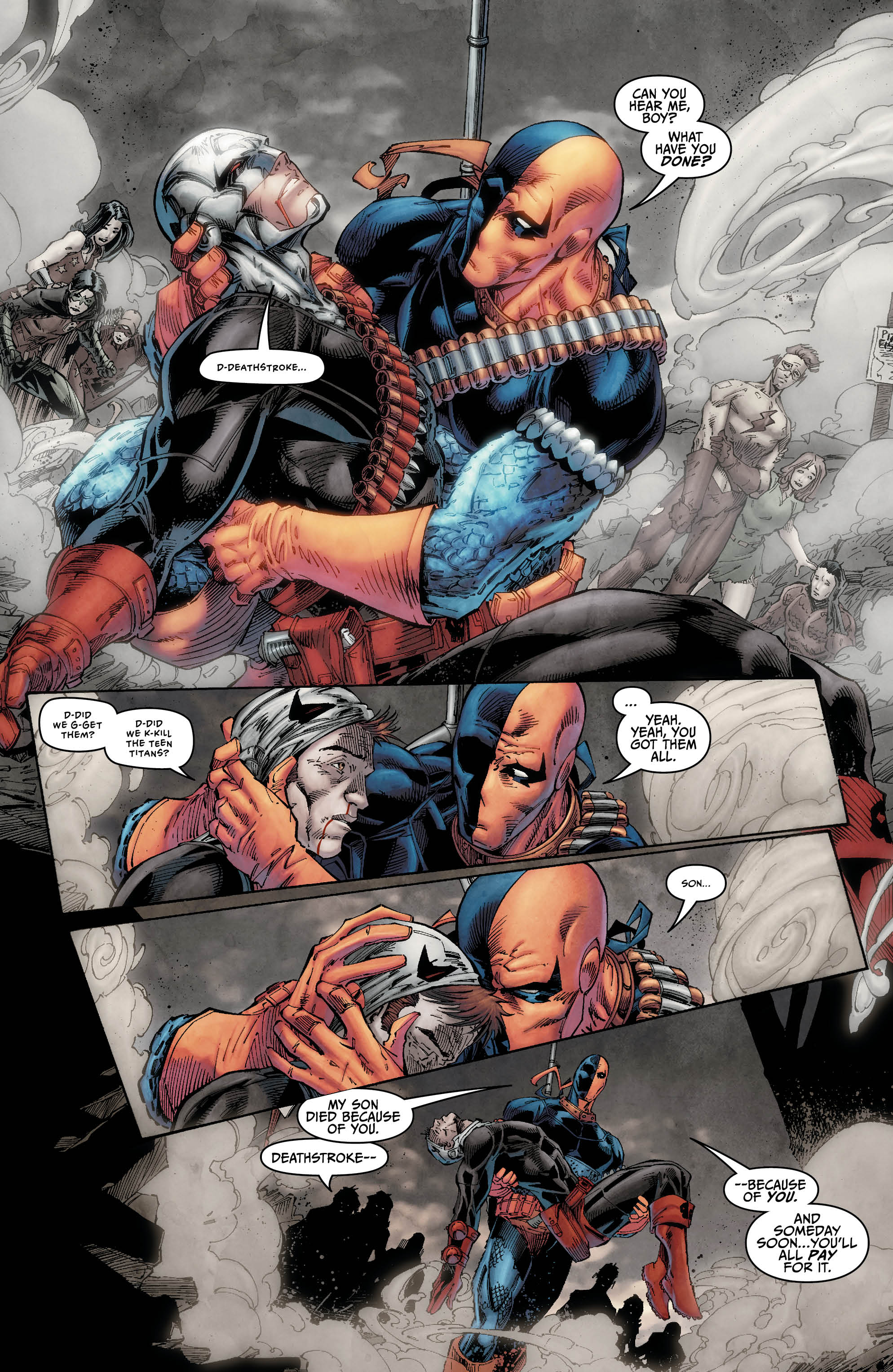 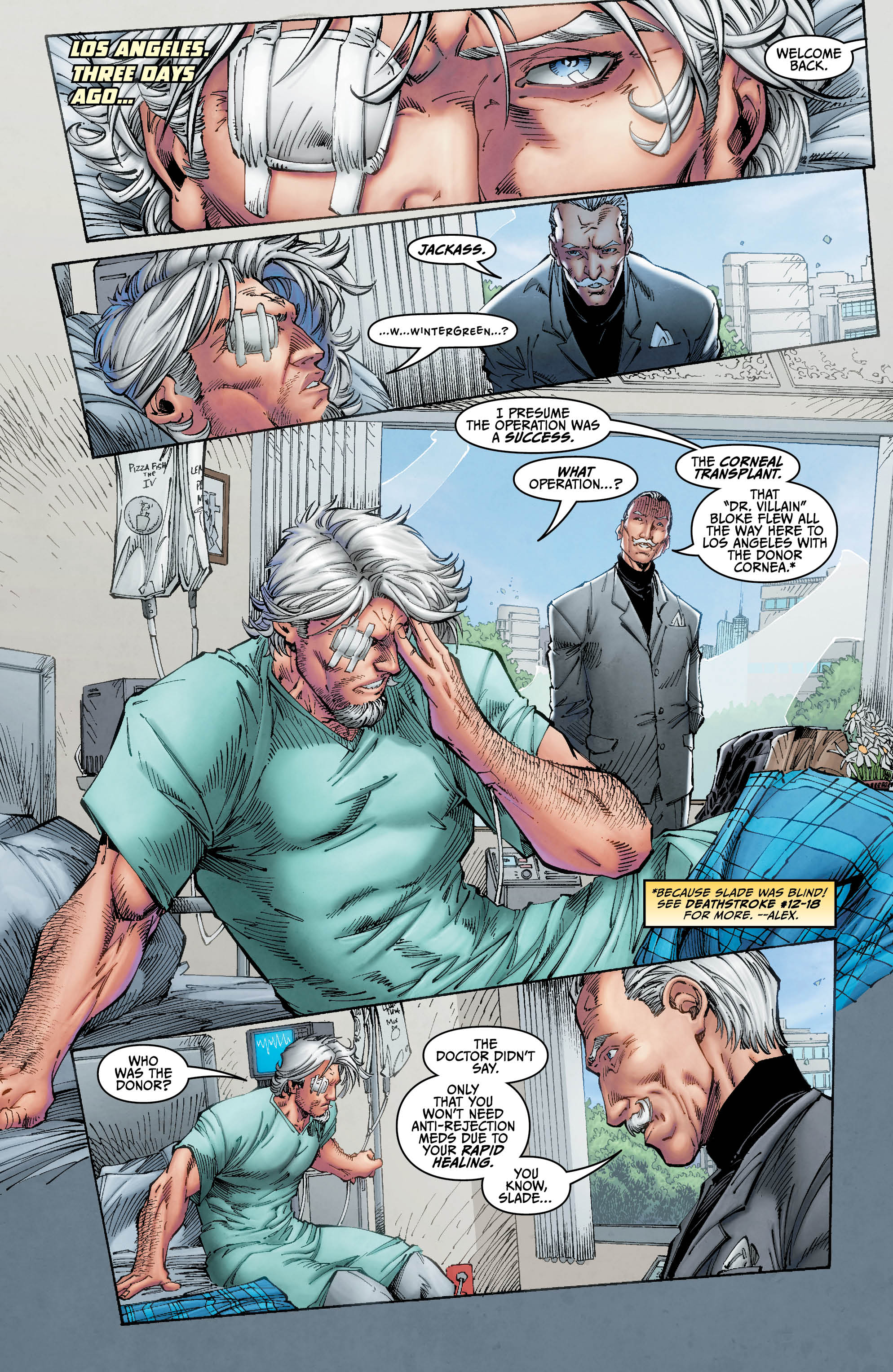 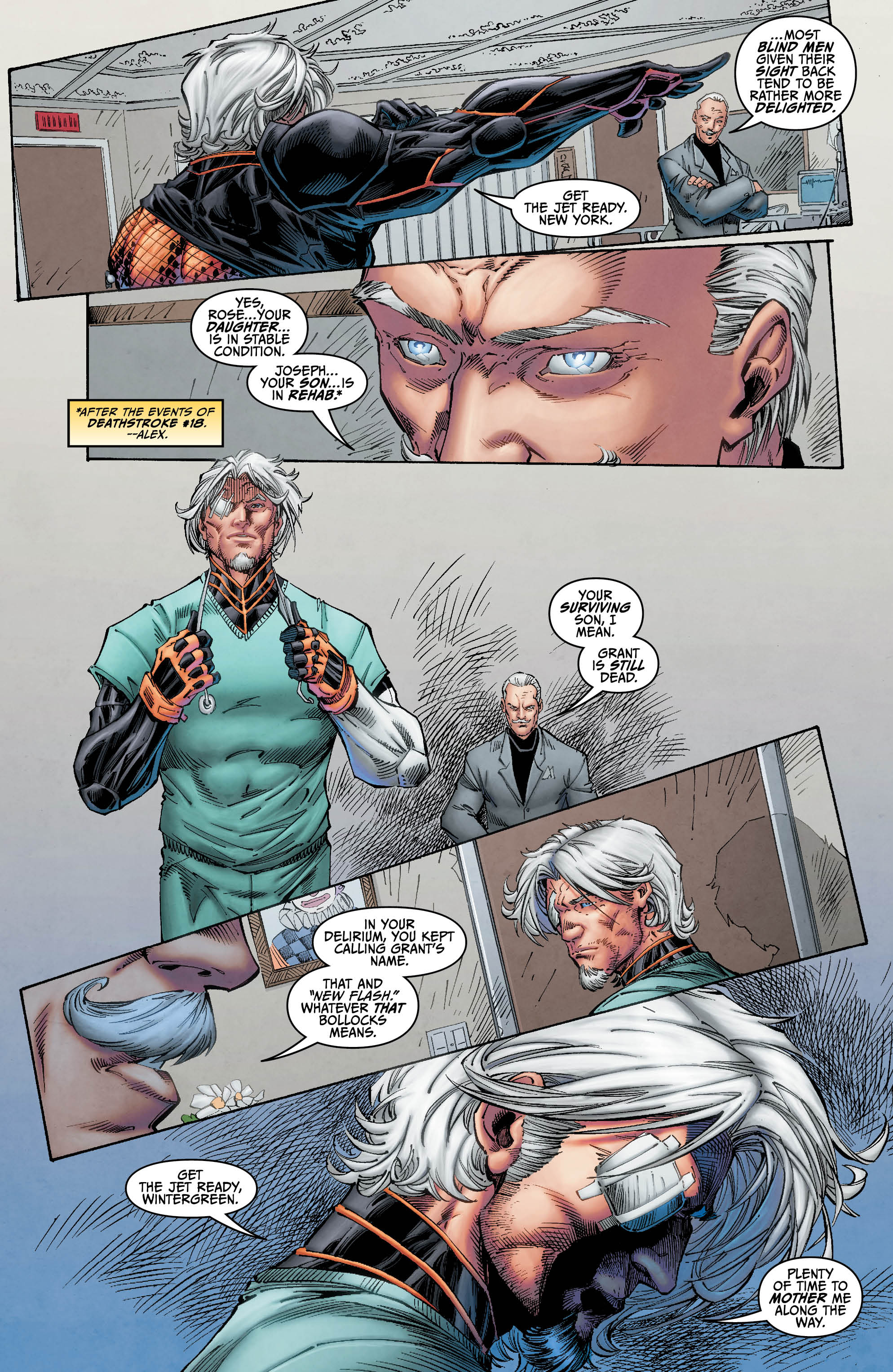 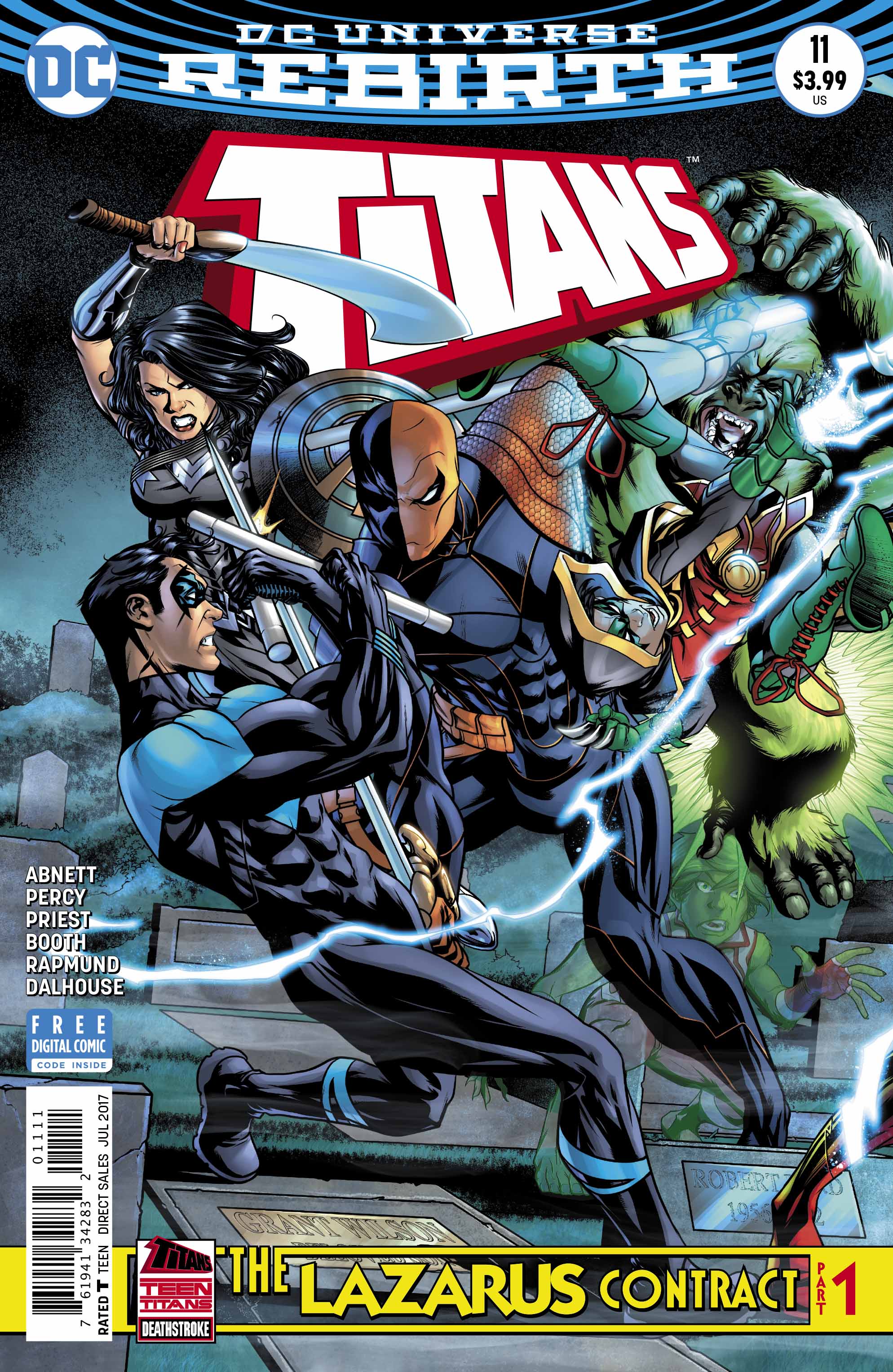 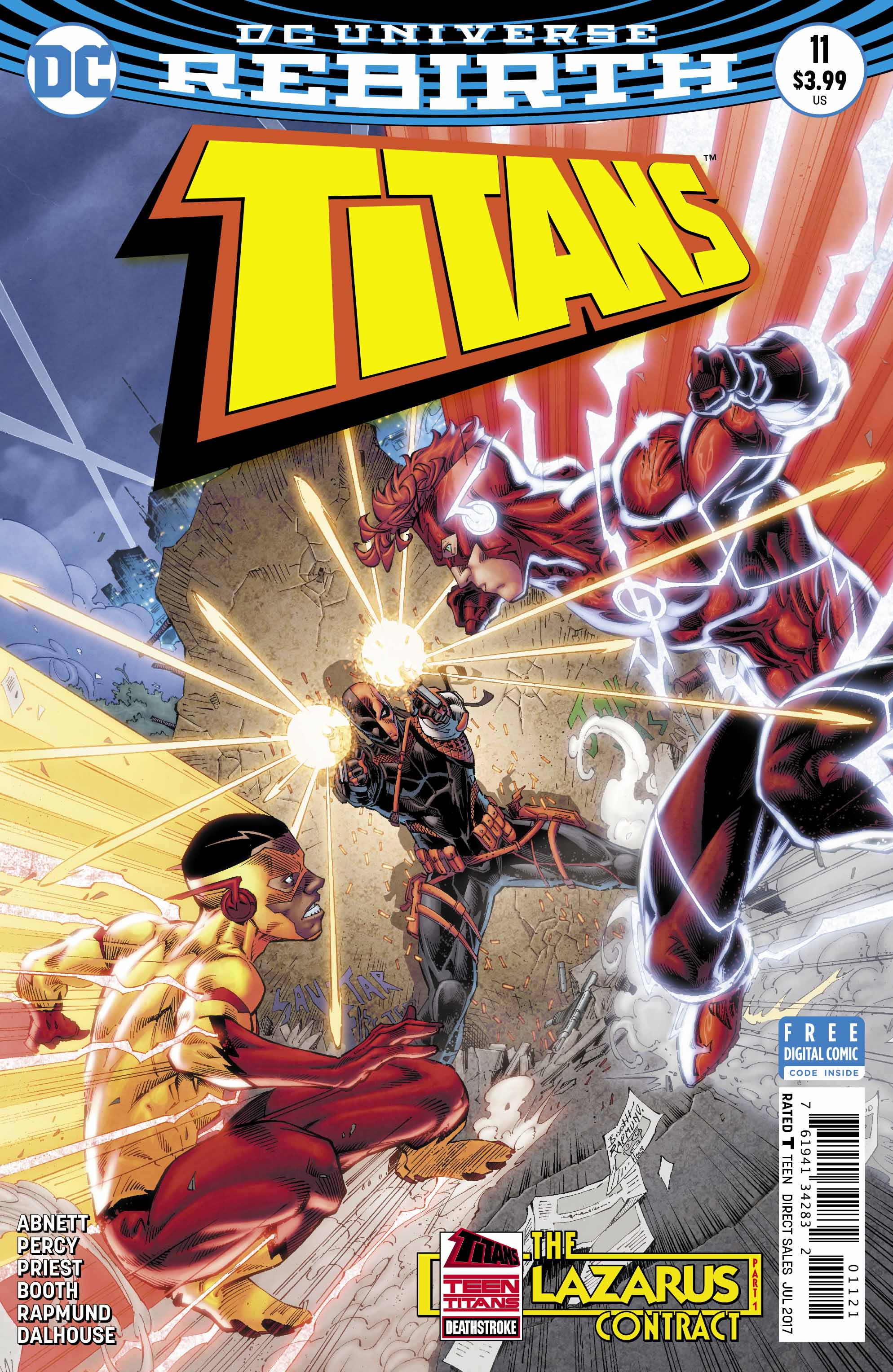 You could argue that nothing much happens in this book story wise, but also a lot takes place. We open on seeing Ravager (Grant Wilson) fighting the Titans before dying suddenly. Slade runs over and carries Grant away, promising that someday they would all pay for it. Jumping forward however many years, we see Slade coming out of hospital with new eyes (as well as some important information pertaining to how Deathstroke #18 wrapped up) and heading out. Jumping another three days, the Titans are fighting a group of robots who are later found out to be hired by someone called Lazarus – and they were just a distraction. In a truly comical style, they realise Wally is missing. “Where’s Wally?”

Wally is seen being held in some sort of contraption and is being asked about the Titans and his disappearance into the time stream. We see that it’s in fact Deathstroke who is grilling him about all of this, and his motivations are revealed: he wants to use the powers of the Flash to travel back in time and save his son. The catch? If Wally helps him, he will stop being Deathstroke forever. Wally still doesn’t want to help him, but that’s when Slade pulls out his contingency: the other Wally West. This was a really interesting twist that I honestly didn’t expect, and honestly seeing both Wally Wests in the same room together looking as confused as each other – brilliant.

Overall, I can’t really fault anything in this book; the story was well written and engaging, balancing emotions really well; the art style was as consistent and wonderful as always; and even though this issue is a set-up for what’s to come, it still felt natural. I’ll be covering all four parts of this insane crossover, so make sure to check back here every week for another new review! If you read this book too, let us know what you thought down in the comments – we would love to hear from you!

A solid first issue to what is shaping up to be a Rebirth-defining crossover event. Titans provided a good backdrop for Part One, and I have complete faith that next week’s Teen Titans is going to take this event to the next level.