DKN Spotlight Review: Batgirl and The Birds of Prey #10 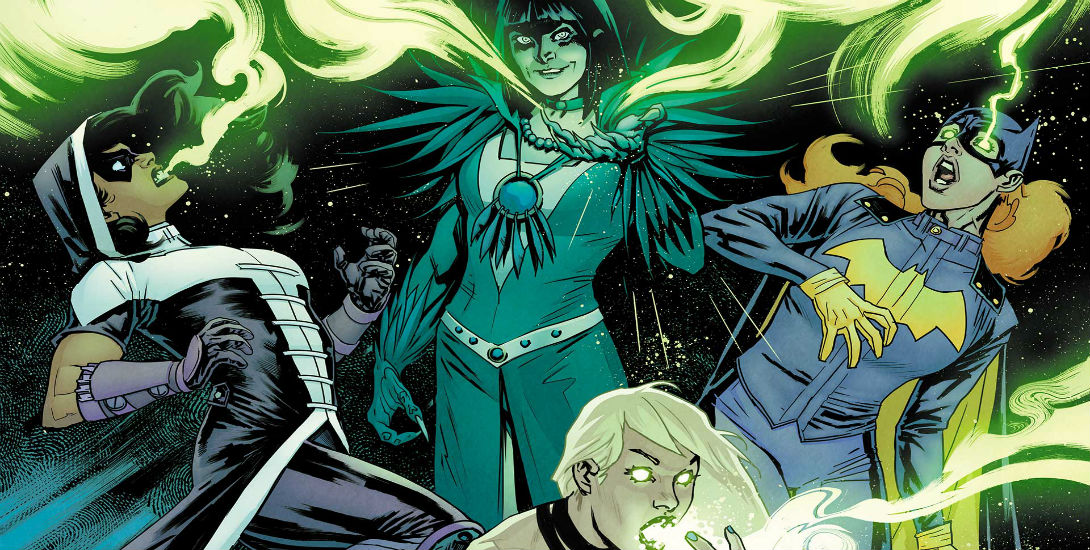 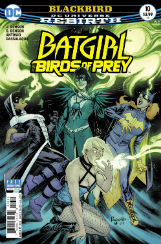 The “Blackbird” story arc finally comes to its conclusion in Batgirl and The Birds of Prey #10. I’ve had very divided feelings for this arc. The “Blackbird” arc certainly isn’t bad and, it began with a decent start, but the main letdown for me was the odd character expressions and the bland environments.

With help from Nightwing and Green Arrow, The Birds of Prey set off to confront Blackbird and rescue Black Canary. Also assisting The Birds of Prey is former metahuman, Gemini, who seeks justice on Blackbird for taking away her powers. They eventually find Black Canary in a Clock Tower and are at first relieved to find their comrad unharmed and with her powers intact. However, it’s soon revealed to be Blackbird disguised as Black Canary, via Gemini’s shapeshifting abilities. The real Black Canary appears, but is mind-controlled by Blackbird to forcibly fight her teammates.

What ensues is a really thrilling fight between the Birds of Prey, the mind-controlled Black Canary, Nightwing, Green Arrow, Blackbird and Kimi (one of Blackbird’s students). The fight was undoubtedly the best part of this issue. Just having all of these heroes work together is truly a sight to behold. I was very impressed how Julie and Shawna Benson managed to incorporate so many characters, but give each character a moment to shine. Every character employed their distinct skills fluently and I particularly adored the moments where they used their abilities in tandem with each other.

After some difficulty, our heroes were able to defeat Blackbird by exploiting her mind-controlling techniques. The arc officially concludes with Blackbird becoming incarcerated in Arkham Asylum, far away from any metahumans and swearing revenge on The Birds of Prey. Really… swearing revenge? I’m sorry but that is the most generic ending to a villain’s arc ever. Anyway, Nightwing takes Gemini away to potentially rehabilitate her, Green Arrow says farewell to Black Canary and The Birds of Prey are celebrating their victory over Blackbird. Unbeknownst to them, the new Oracle is hiding a secret from them. 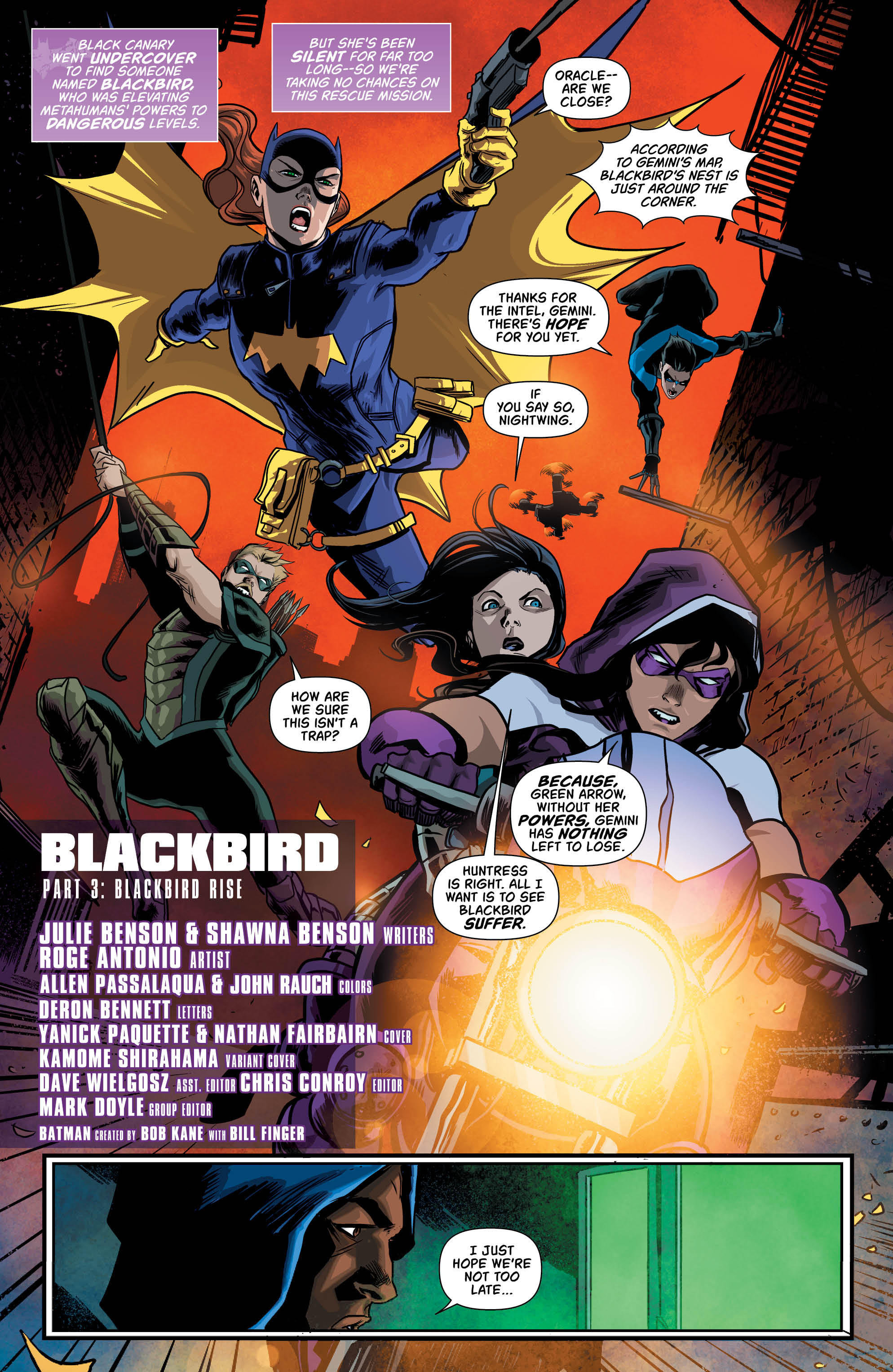 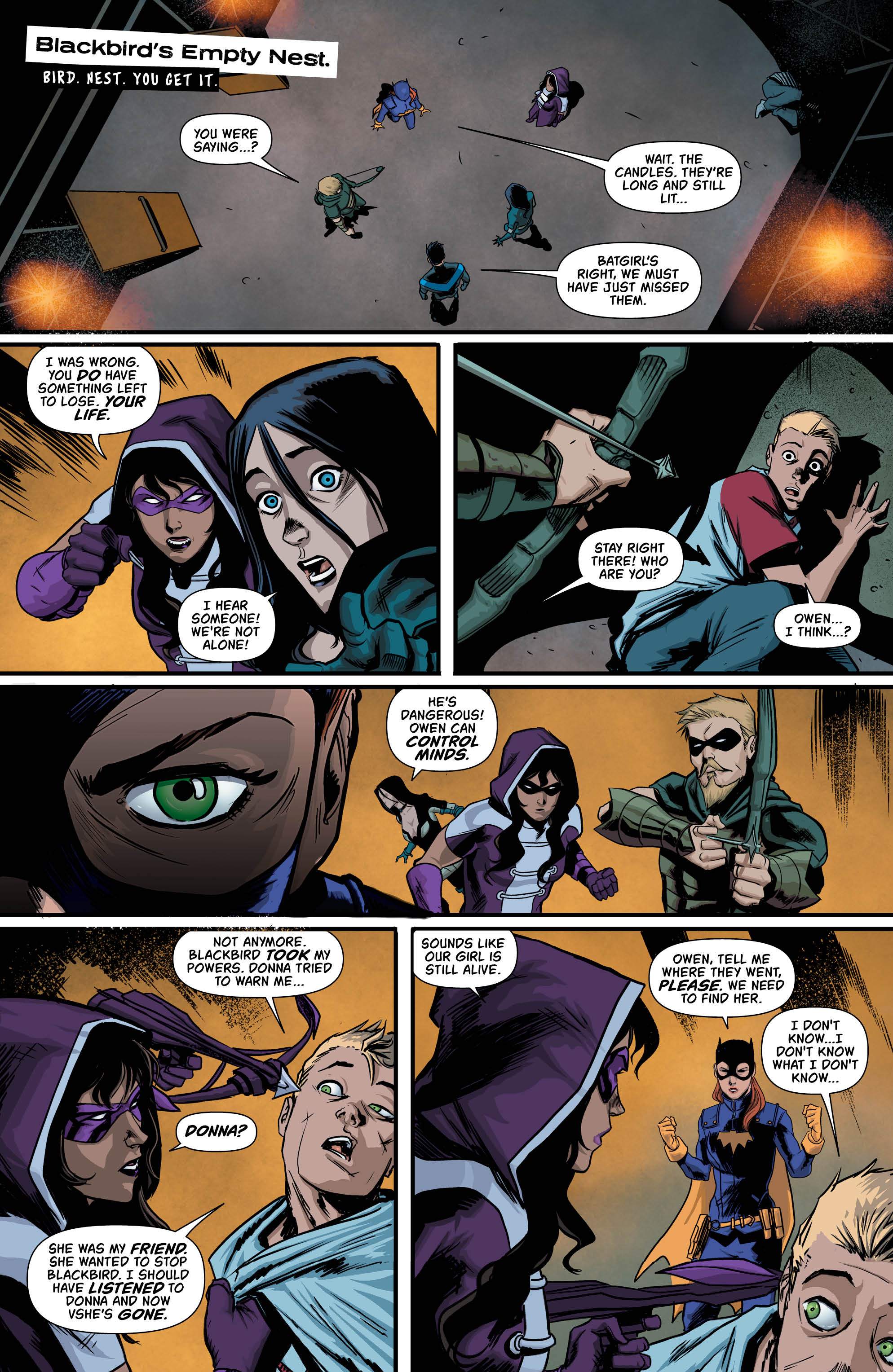 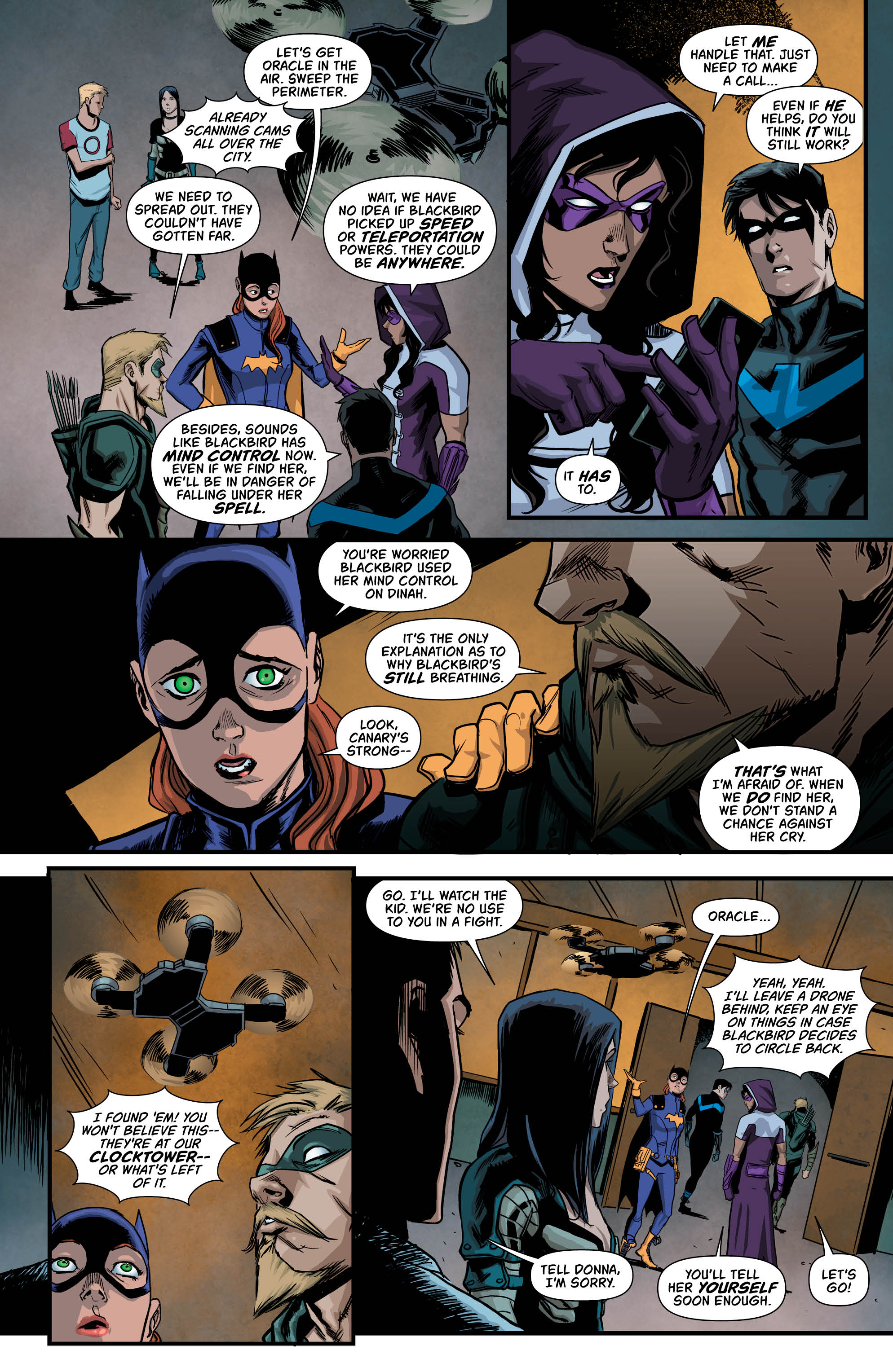 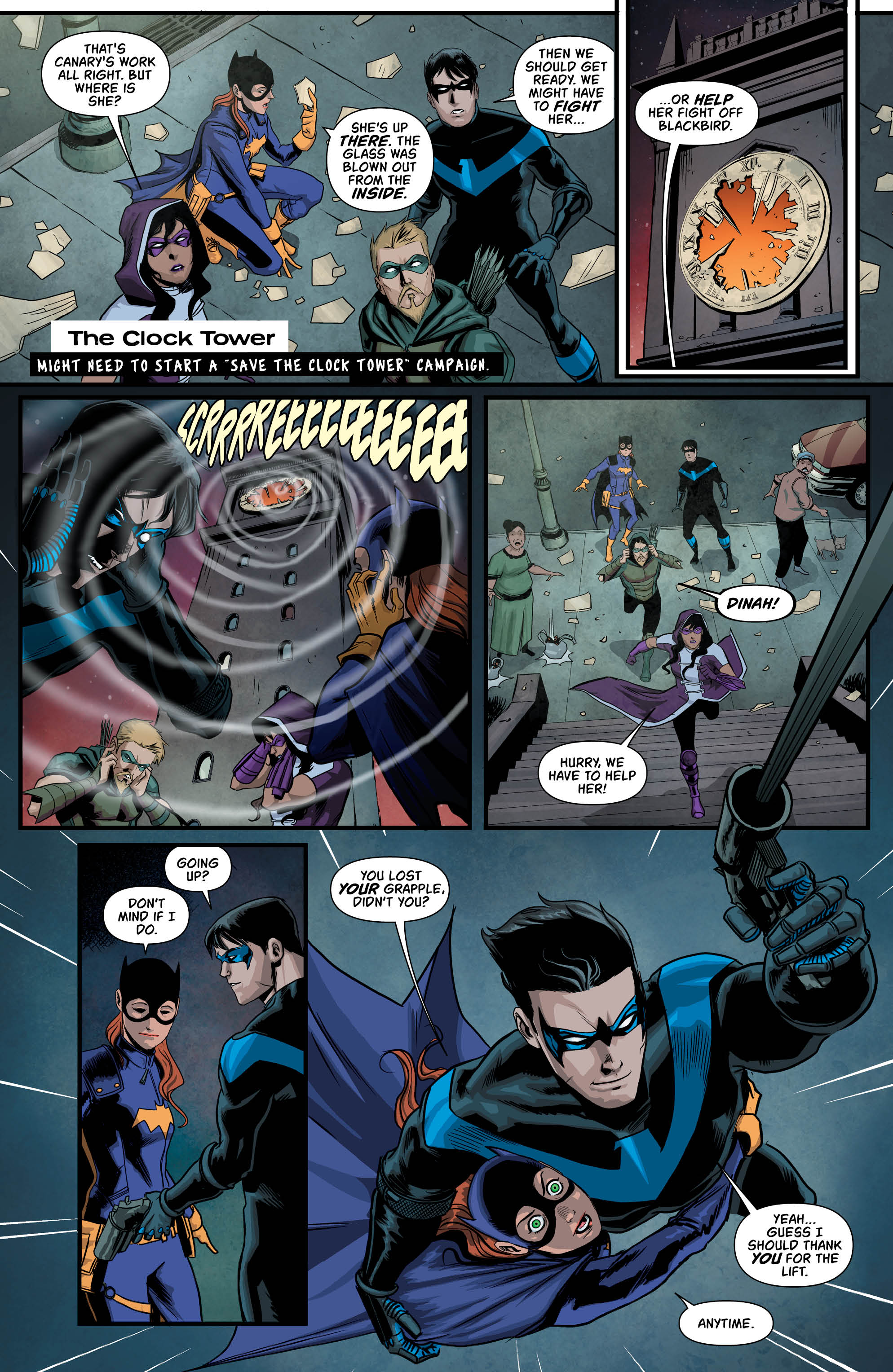 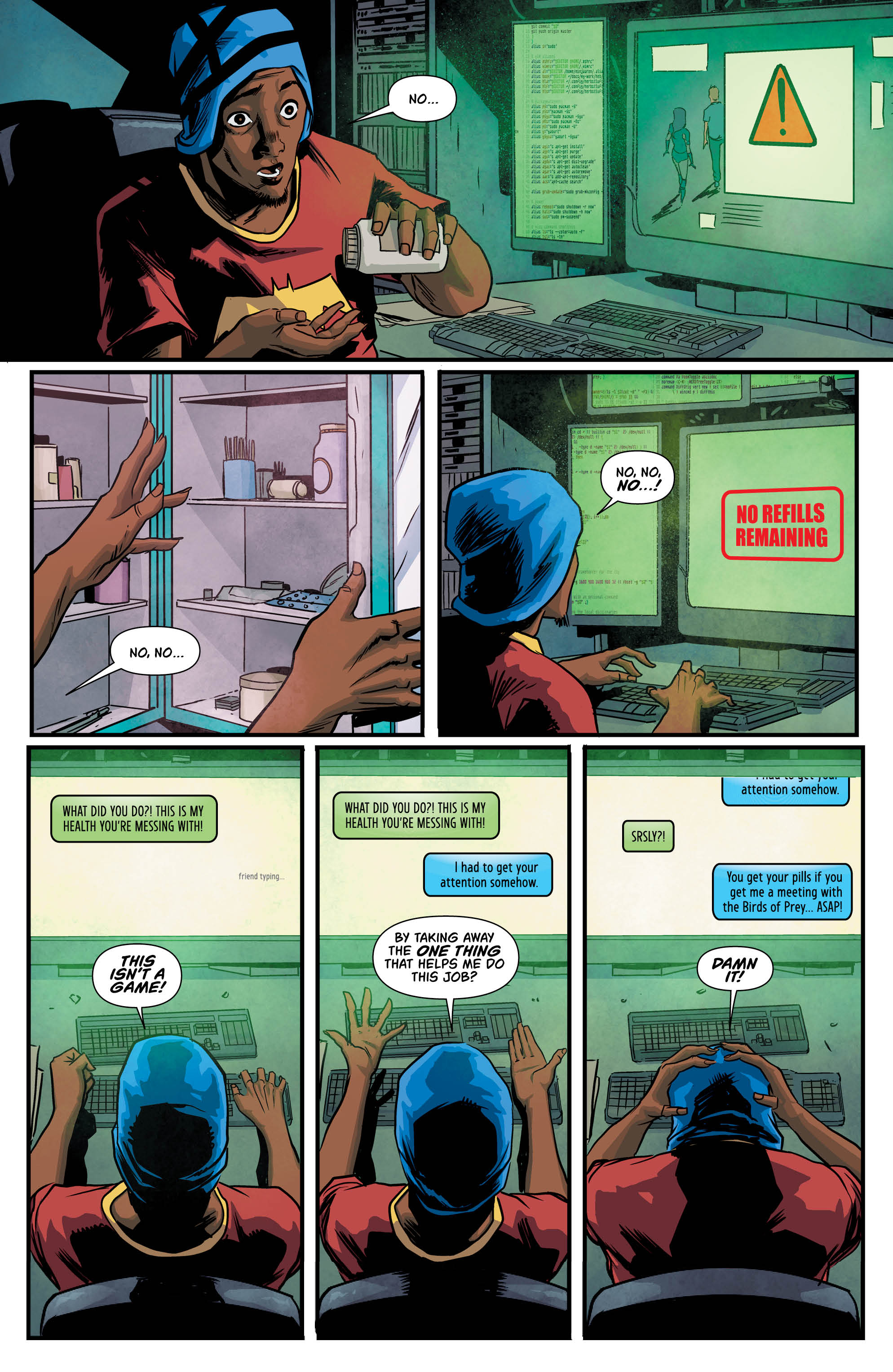 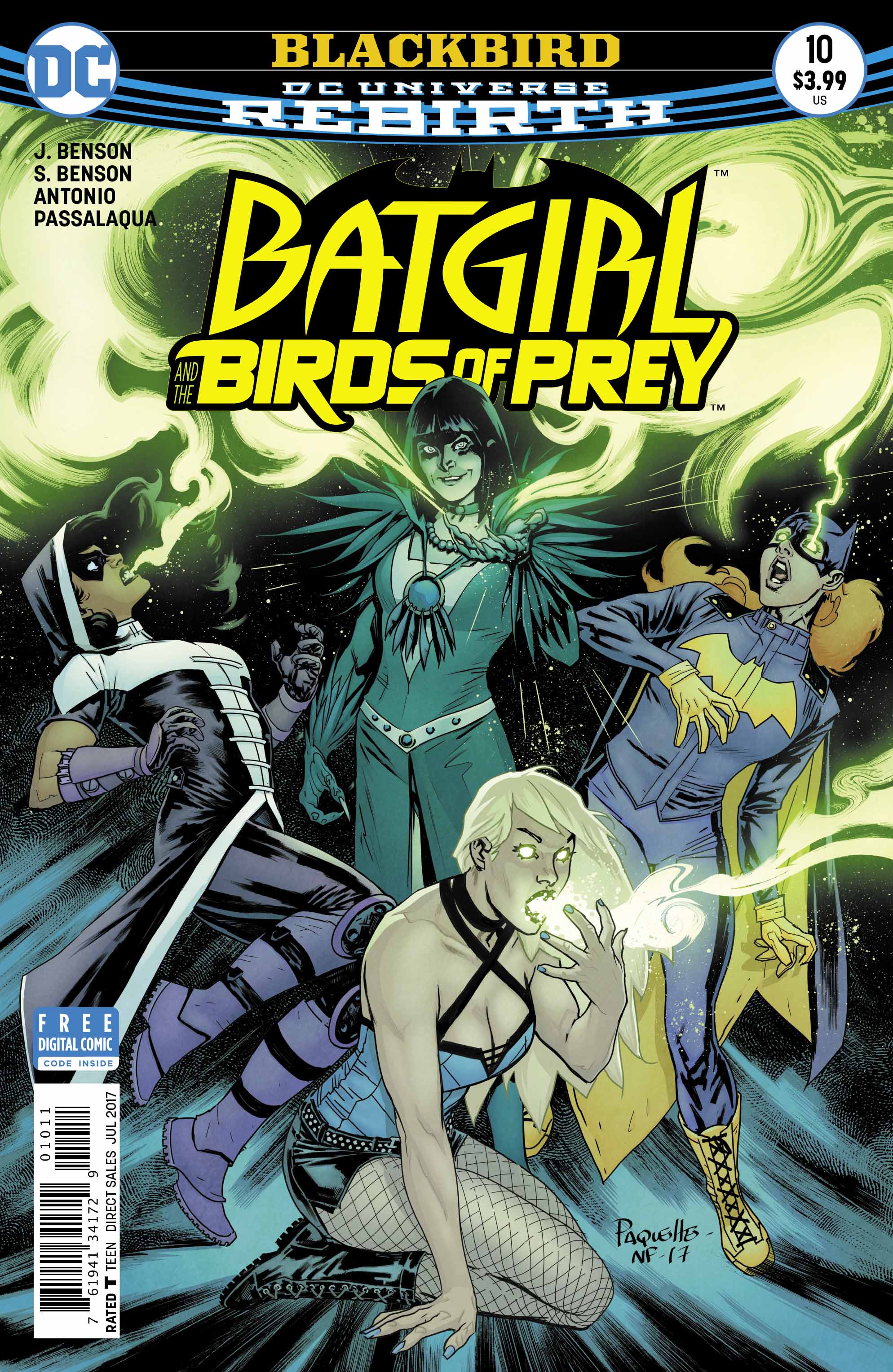 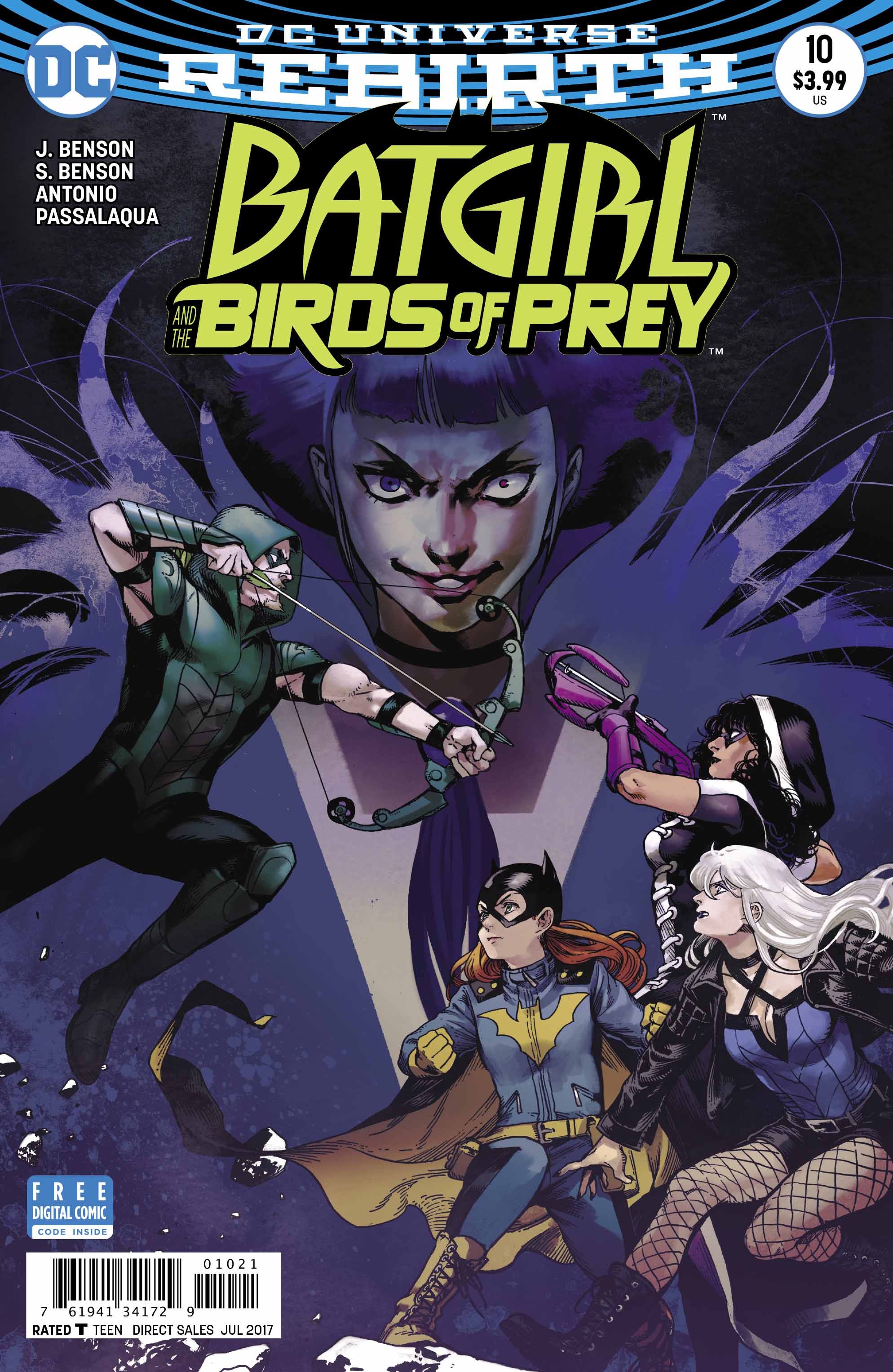 Like I mentioned before, the main letdown of the arc to me was the artwork. The character expressions were drawn inconsistently with the dialogue. The environments were drawn with little to no detail. That one panel featuring the exterior of Arkham Asylum displayed more intricate detail in the entire arc than the last two issues combined. Many of the panels lacked so little detail that I honestly forgot what locations the characters were at times. However, there were panels where I thought the character designs actually looked better. I could only pinpoint around 5 panels that really made improvements from the previous issues. Despite the environments lacking detail as a minor disappointment to me, I thoroughly enjoyed the dialogue and the interactions between characters.

The panel where Green Arrow and Black Canary are saying their farewells to one another was a poignant moment and thoughtfully encapsulates their relationship. The Birds of Prey reuniting after their ordeal with Blackbird was a great moment which showcases the bond they share. I thought the villain herself was largely forgettable. Her power-stealing abilities certainly evoked an aura of menace, but her motivations were uninspired and I’d honestly wouldn’t remember her as they series progresses.

While I haven’t been a fan of the artwork, I did see some my improvements in the issue #10. I adored how Julie and Shawna Benson captured the spirit of not just the titular Birds of Prey, but also supporting heroes Nightwing and Green Arrow. Black Canary’s relationship with Green Arrow and her predicament with Blackbird was a valid reason to include Green Arrow into the story arc. That big fight against Blackbird deserves noteworthy praise and was definitely my favorite part in the entire “Blackbird” arc. I also appreciate the writers for giving Gemini and Blackbird’s students closure and I would even like them to reappear again as they struggle adapting to life without their powers. The writing wasn’t cliche or cringe-inducing like in the previous issues. Overall, while I do have mixed feelings regarding this arc, I’m enjoying the series on a whole and look forward to the Birds of Prey’s next adventure.