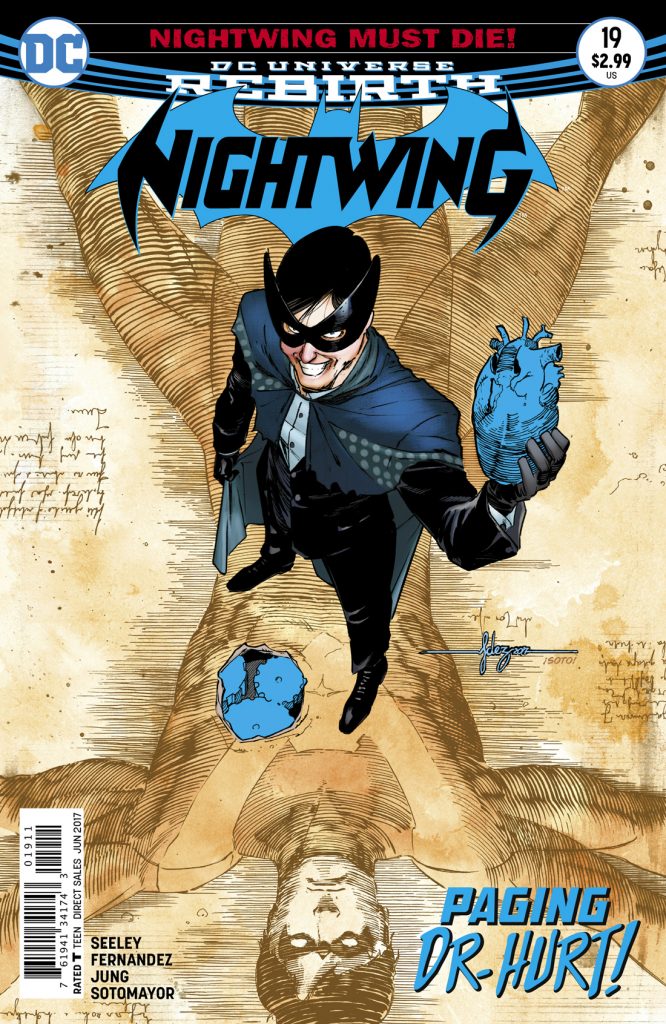 Every two weeks when Nightwing hits shelves, I get unbelievably excited. Tim Seeley and his team have presented some of the best work that Rebirth has to offer in the pages of this series, and I can’t stop raving about it to anyone who will listen. This issue – was no exception. Picking up after the amazing revelation that Dr. Simon Hurt has been masterminding this entire arc, we see Dick and Shawn moving through the desert to find Damian and Simon. After an attack from some bandits, Deathwing drops a statue on Shawn, which drives Dick to the edge. Holding a blade to Deathwing’s face, he reverts back to his original persona and Shawn comforts him as Dick moves forward. Upon finding Simon, he sees that Damian is already dead and collapses to the ground, seemingly dead as well. So – a lot  to unpack this issue.

Firstly, I want to bring up Shawn’s Defacer costume. It looks bad-ass and I love it. I’m excited to see her and Dick teaming up, even if he introduces her in this issue as “a genuine American super-villain.” On that note too, the humor at the beginning of this issue was great. I actually laughed out loud for a second when Shawn and Dick were chatting at the start. Then the text got really emotional, with Shawn telling Dick he will make a great father and how she hopes she will be a good mother. Then the fight with Deathwing brought out an almost savage side of Dick, which was amazing and somewhat terrifying. Speaking of terrifying though, watching Richard (I was sick of typing Dick) walk down the hallway of failed Nightwing and Robin dollotrons is hands-down one of the creepiest comic moments I’ve ever witnessed. This entire issue just flowed so well and displayed such a high level of emotions and honestly Tim Seeley has impressed me a lot with the writing of this issue. He has truly stepped up his game. 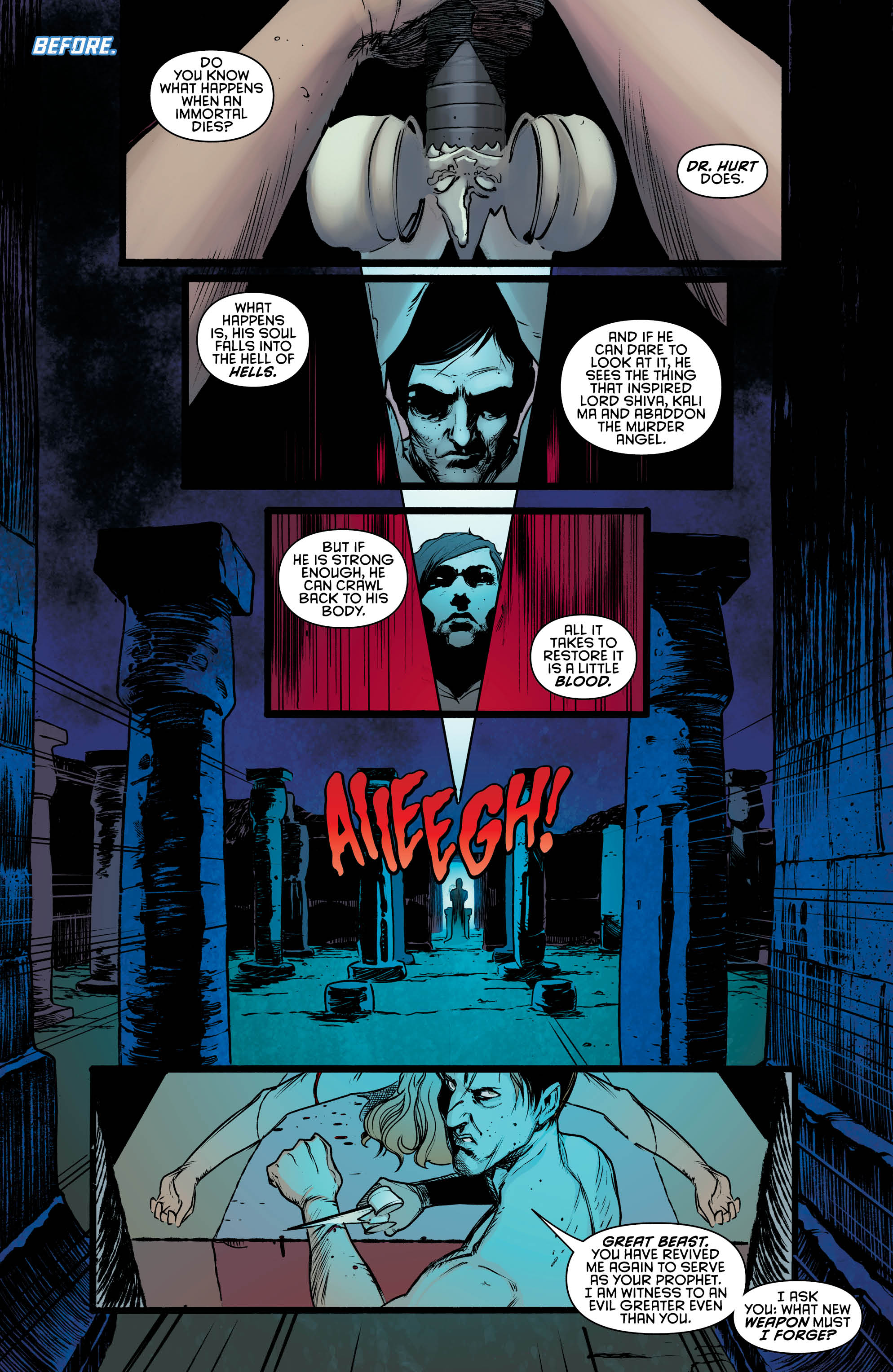 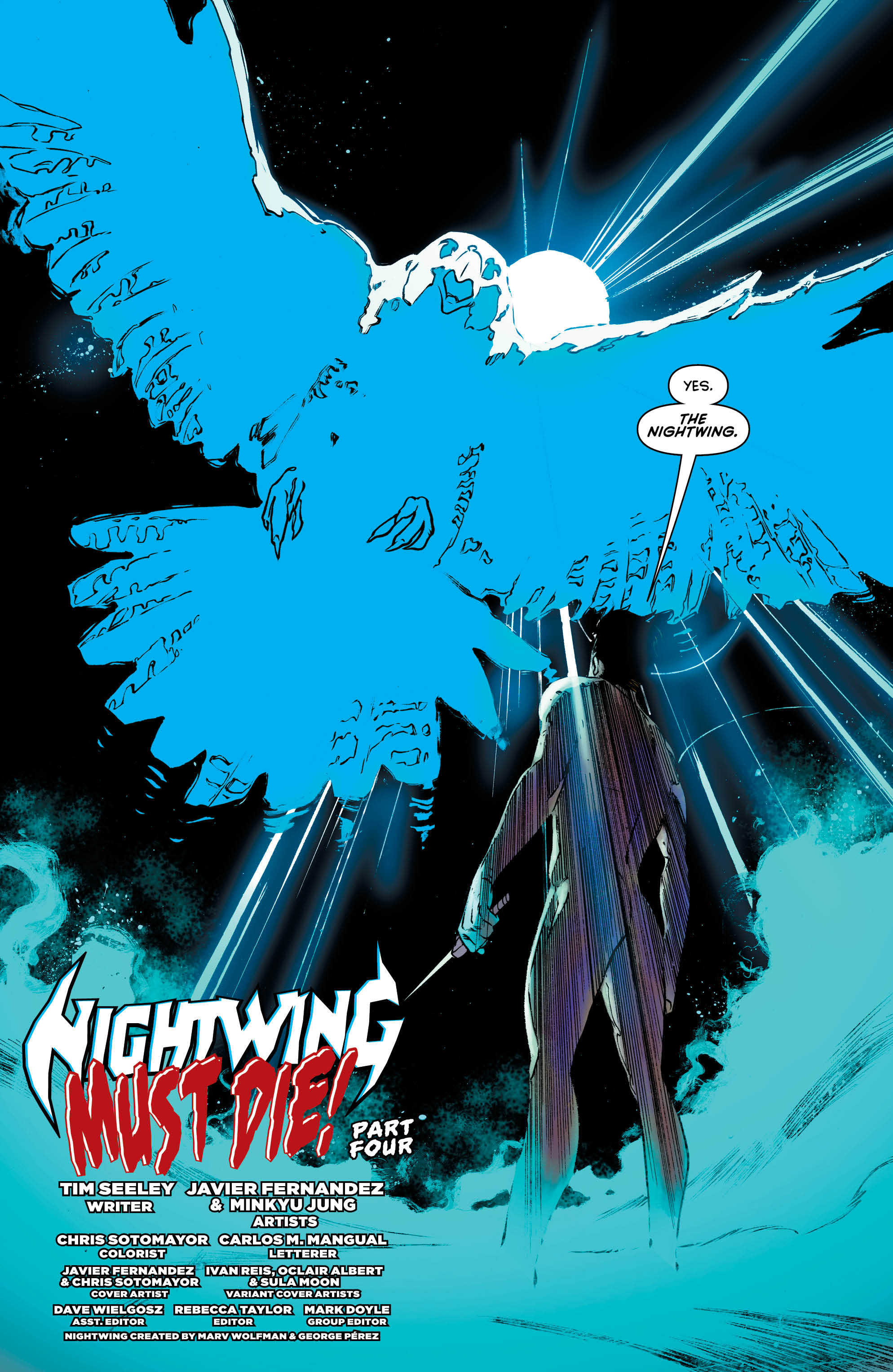 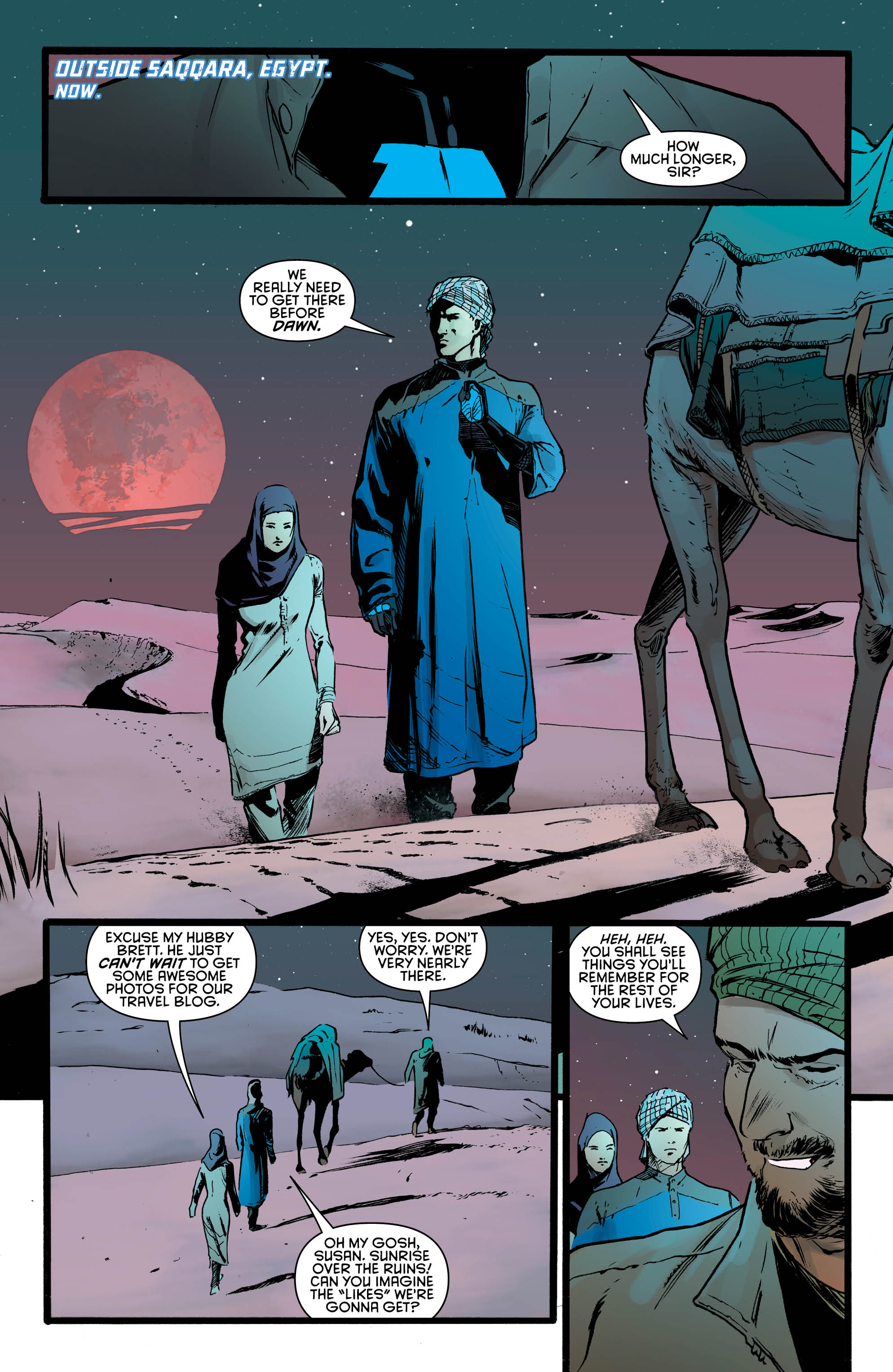 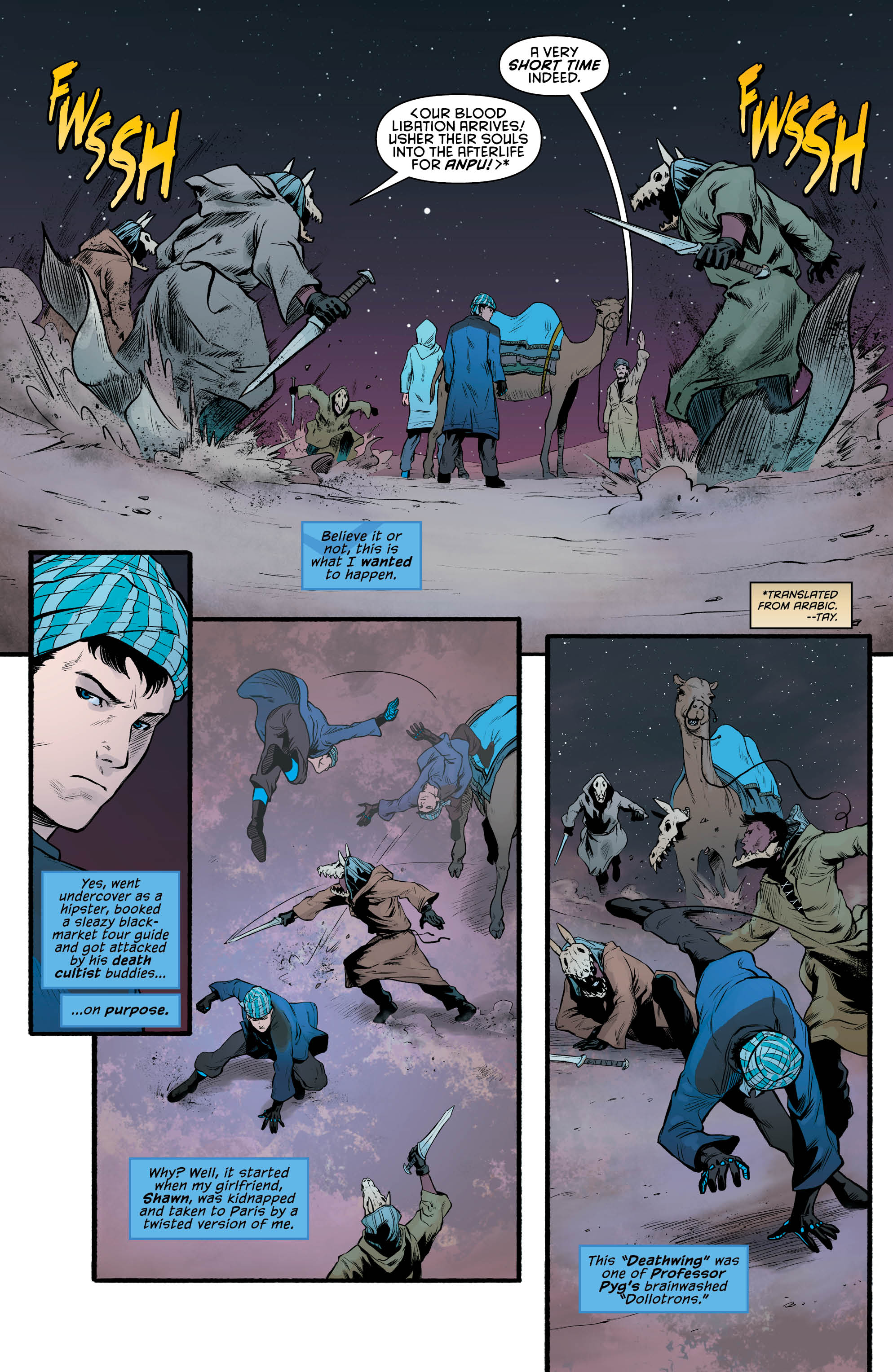 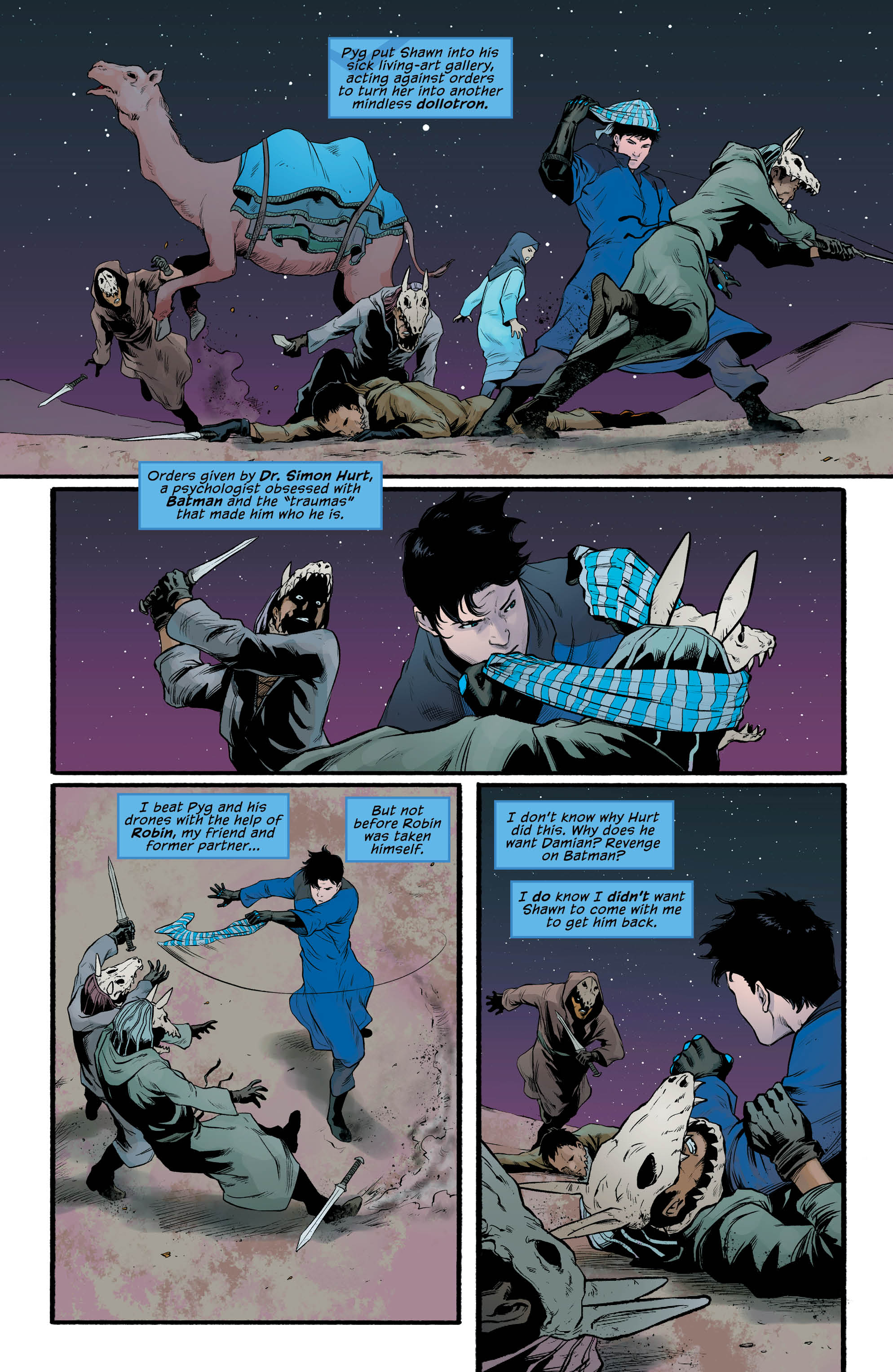 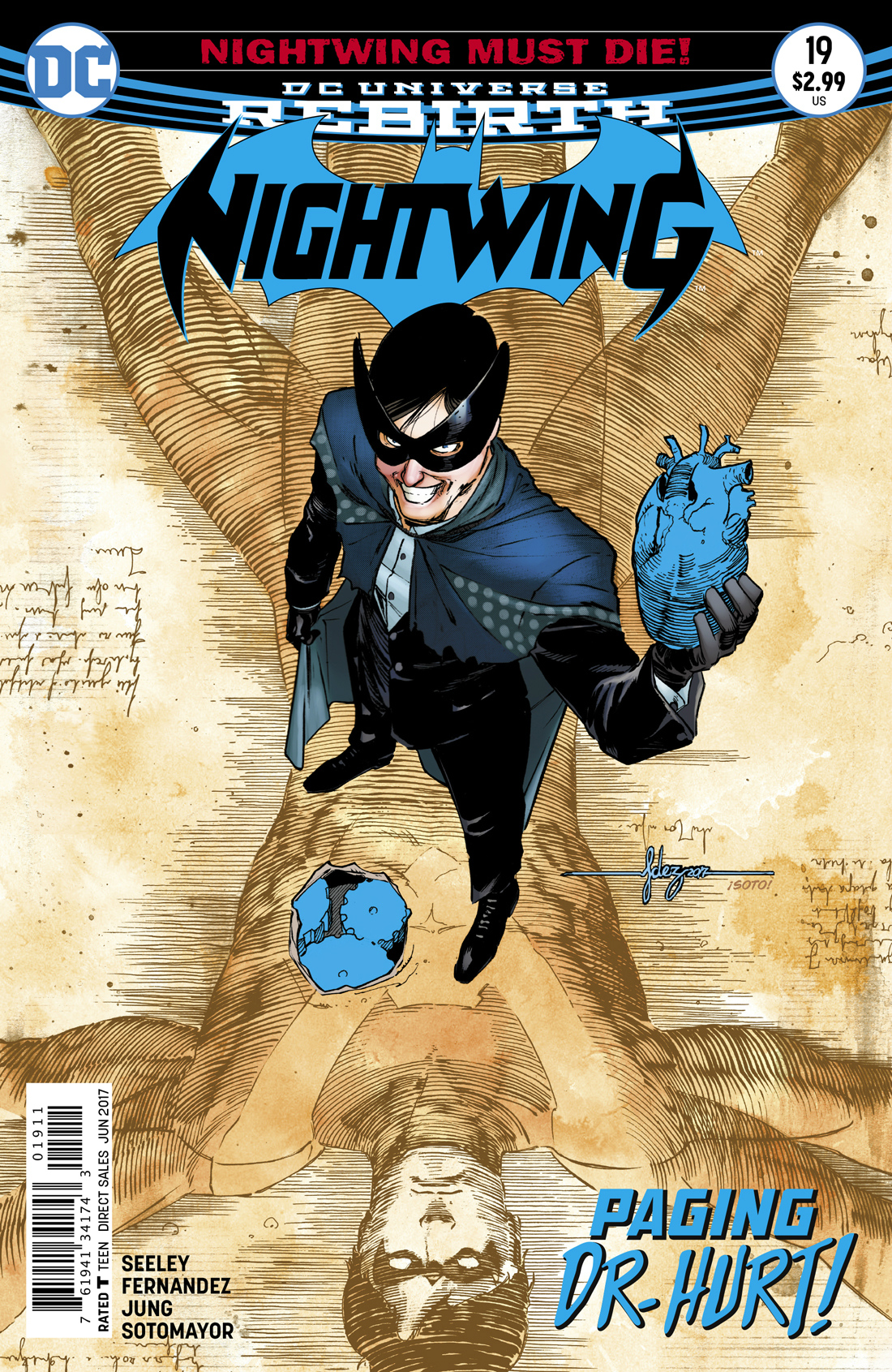 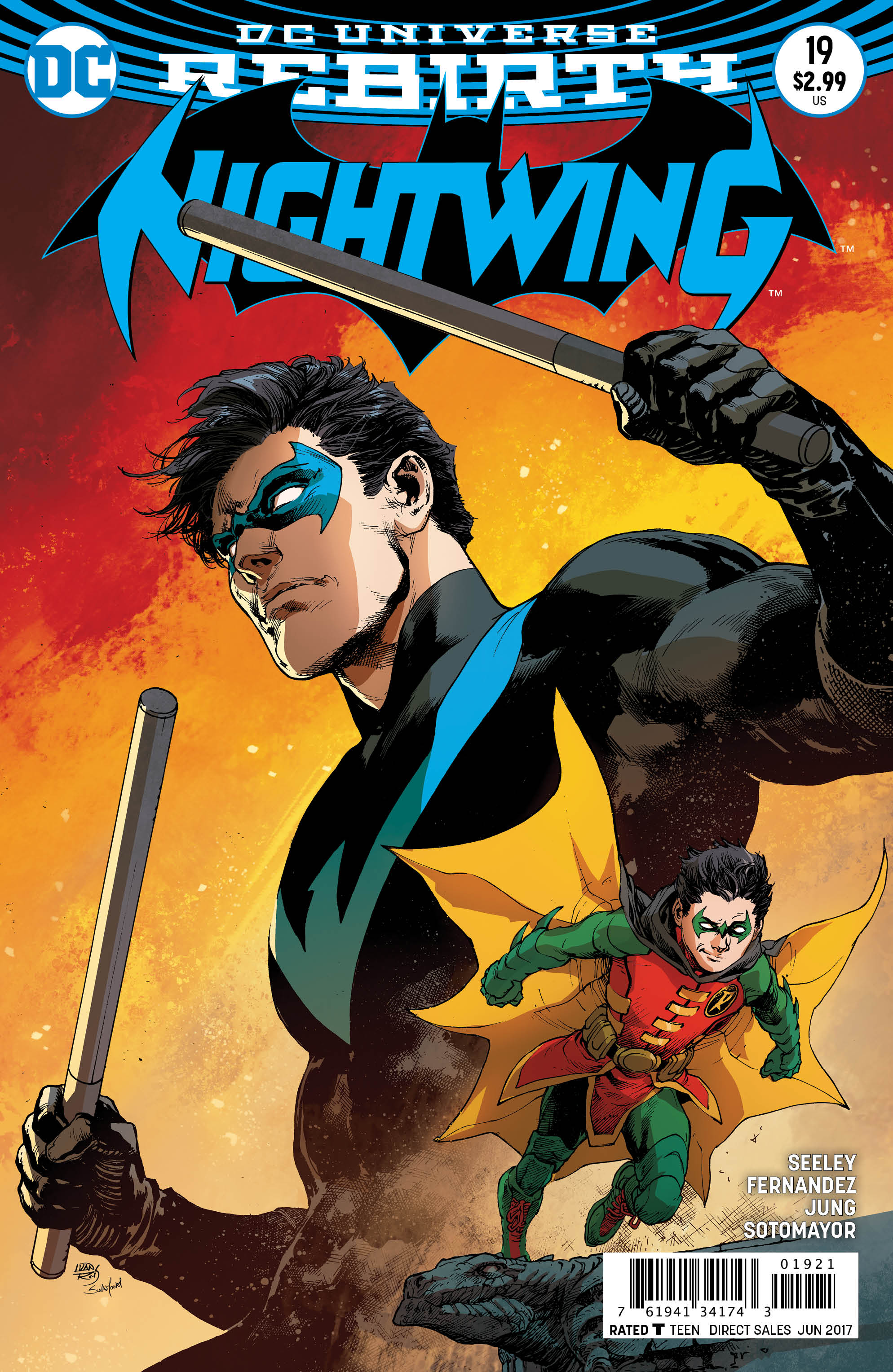 In terms of art, we have two of my favorite artists in the form of Javier Fernandez and Minkyu Jung who always do an incredible job with this book. As always though, we also have the wonderful Chris Sotomayor on colors and Carlos M. Mangual on letters. This team of artists combined with Seeley’s writing just makes this book an absolute delight. I know what some of you are thinking though: “Tyler, can’t you talk about even one negative? No book is perfect.” Well, yes: no book is perfect. But Nightwing comes as close to that word as any series can. If you haven’t read this book, do yourself a favor and pick it up.

I also want to bring up the ending real quick too. The ending of this issue, in my opinion, is a red herring. I don’t believe Damian is dead because well he’s died before and quite frankly I don’t trust any death in comics anymore. To me – that seems obvious. But in the world of the comic and in the eyes of Dick, Damian is dead, and I feel as though next issue will focus a lot on Dick dealing with that and making his way back to consciousness to kick the hell out of Simon and make him hurt. What a wonderful pun to end on. Punderful indeed.

Anyone who reads my reviews of this book frequently knows what I’m going to say: I loved it. This arc has been absolutely fantastic thus far and with Seeley bringing in elements from the Grant Morrison Batman and Robin run, things are shaping up to get even more exciting as time goes on!

‘Injustice 2: The Versus Collection’ Statues Are Coming