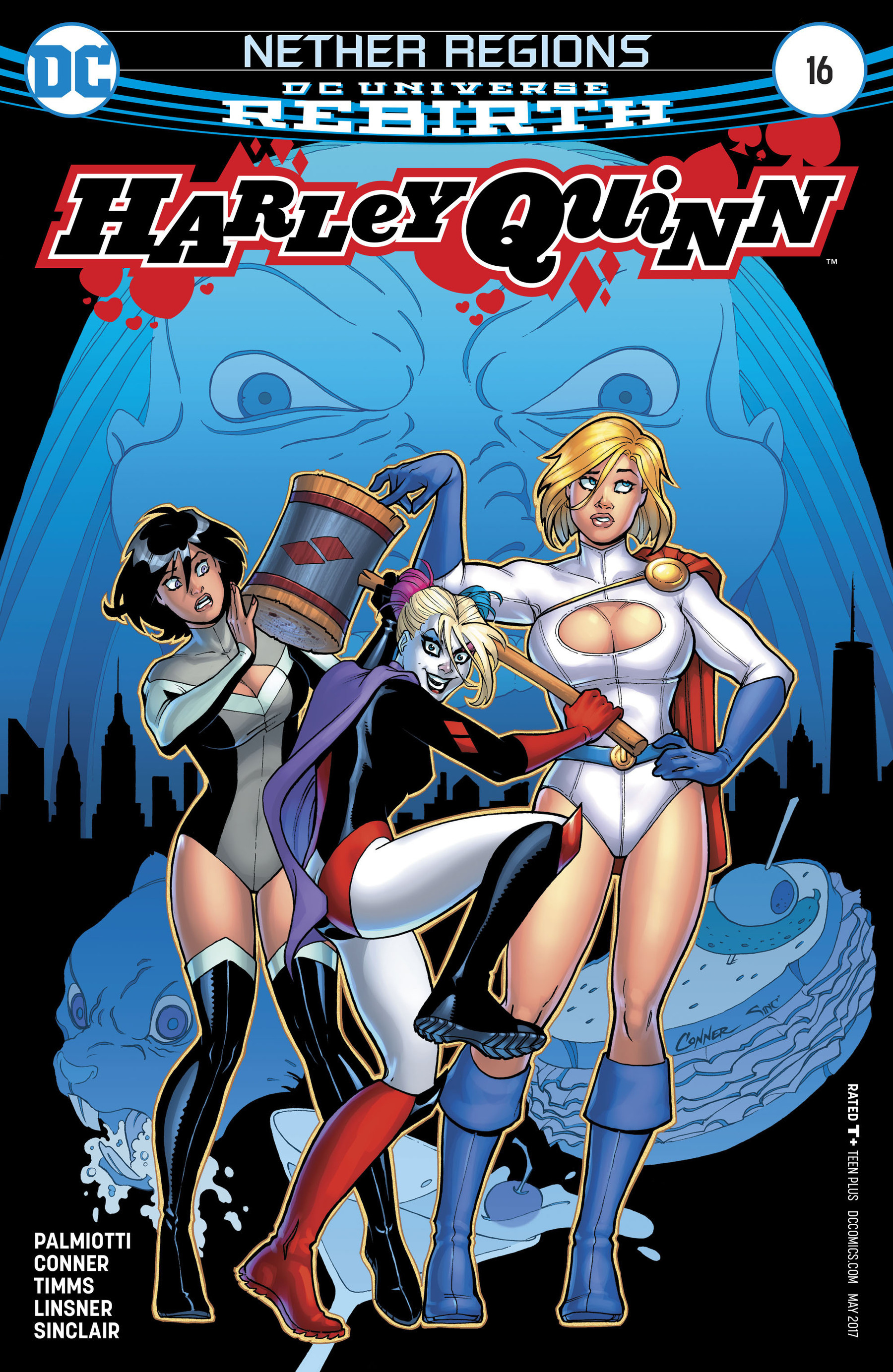 Time to follow the tale of our favourite Brooklyn Sweetheart, Harley Quinn #16, the third installment of the story arc: “Domination Abomination.” I’ll get right into what the highlight is: the gorgeous team up of Harley, Power Girl and Atless. Having a team up of superheroes who are all women is exceptionally rare. I am loving this series. It has a a decent amount of unique moments and the writing and art tests boundaries. A new idea demonstrated is her practice in coping mechanisms. In the previous issue of this arc, she says “keepin’ busy” is the best sort of therapy. This is what she needs right now, and she follows it.

In the Rebirth Harley saga, she makes every interaction a delight, yet the writers don’t take away the seriousness, and adult themes so easily… I mean, unless if they want to. Such as Zorcom’s demise, but I’ll get to that.

The antagonist is Zorcom. His character design is an iconic alien baddie style: body structure, sharpness of face, and electric blue skin. Blue or green characters are often used to signify villainy.

He doesn’t seem to understand how easily Harley, Power Girl, and Atlee could take him down. More importantly, they don’t want to take him down, he’s just not worth the effort. He lacks compassion for human life, but he isn’t logical or cunning either, just a giant electric baby with empty threats. 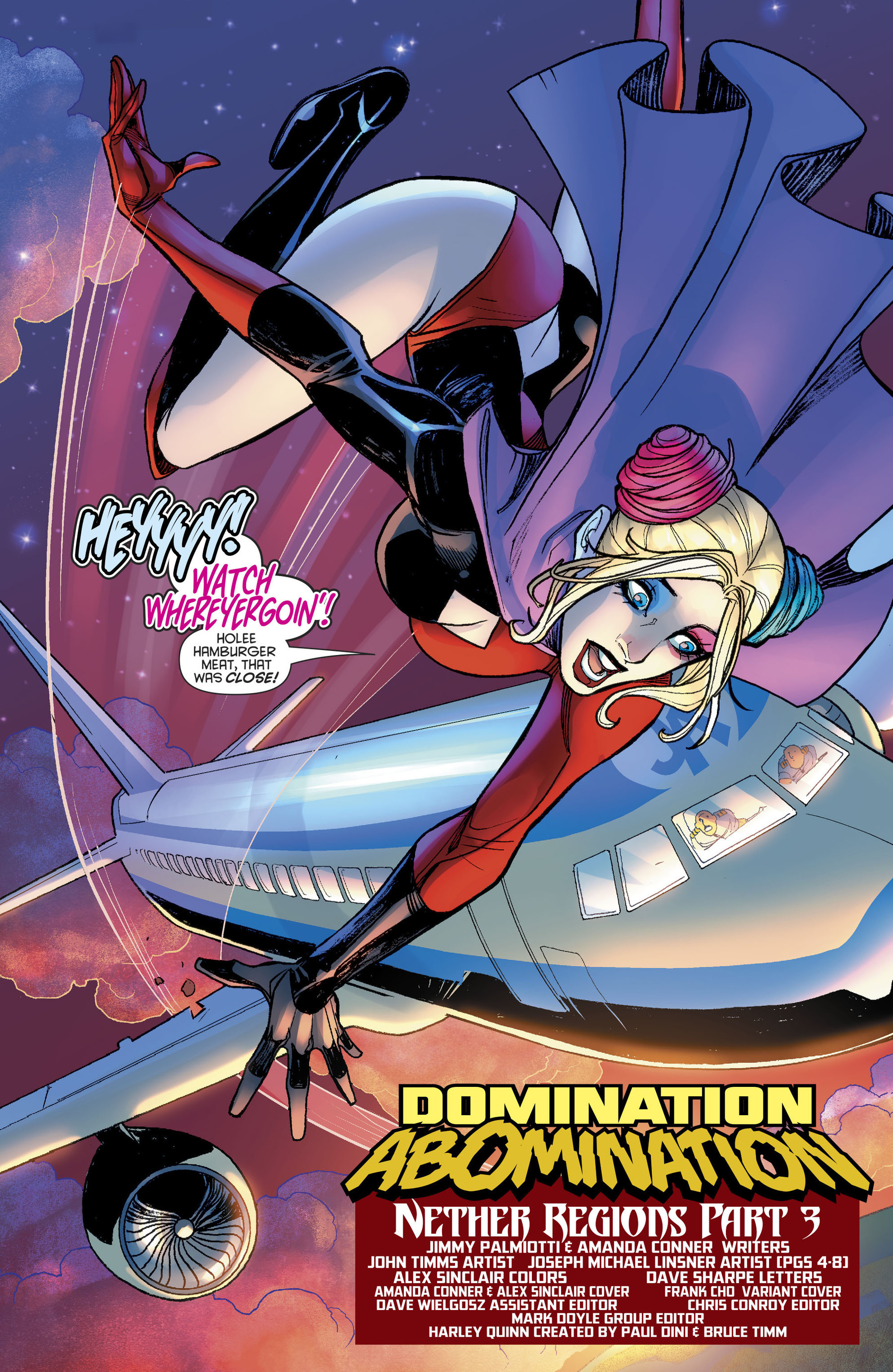 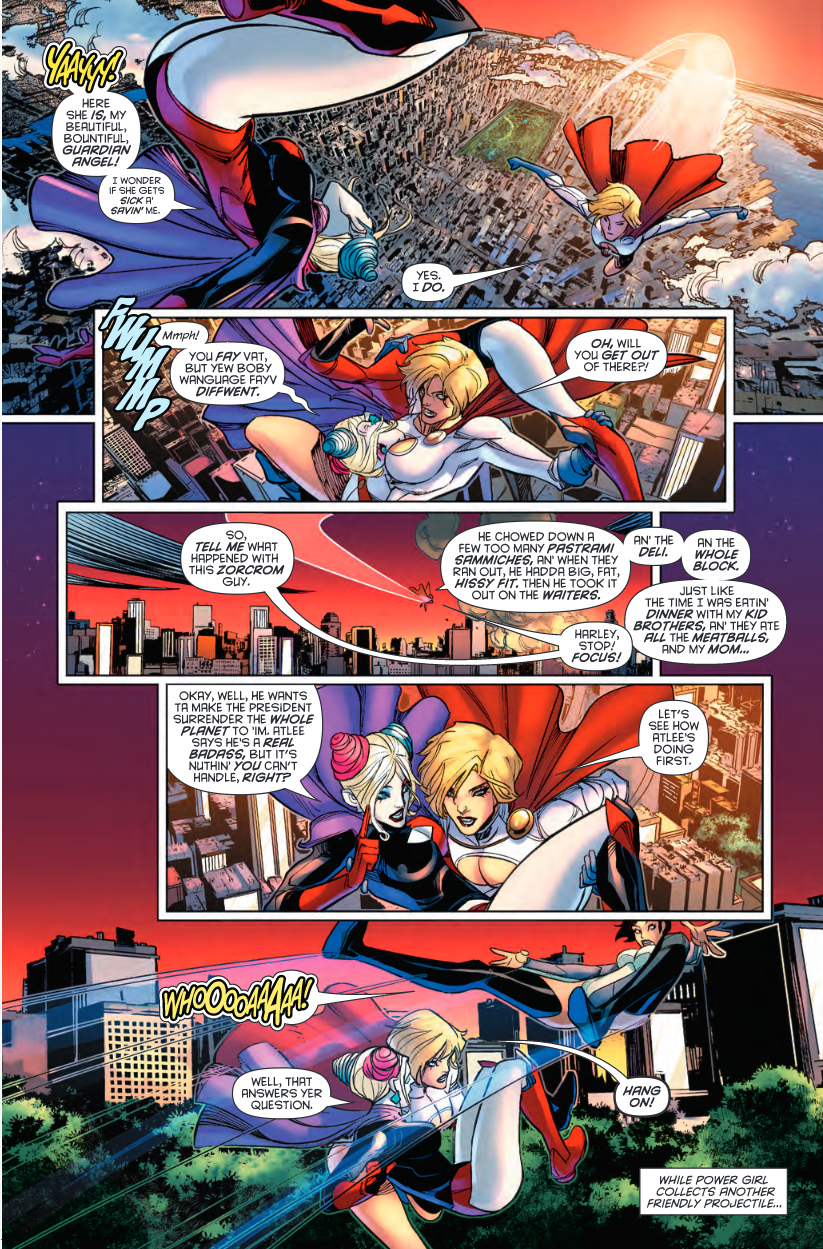 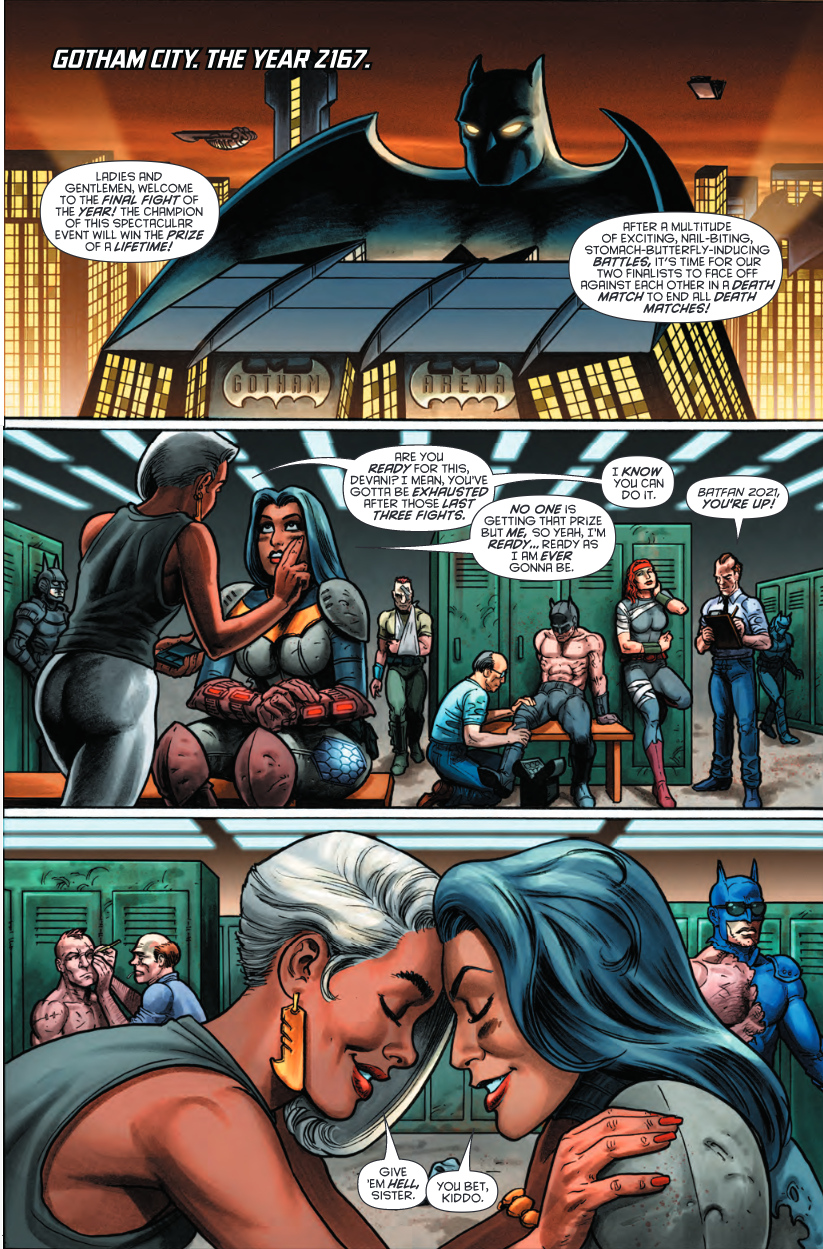 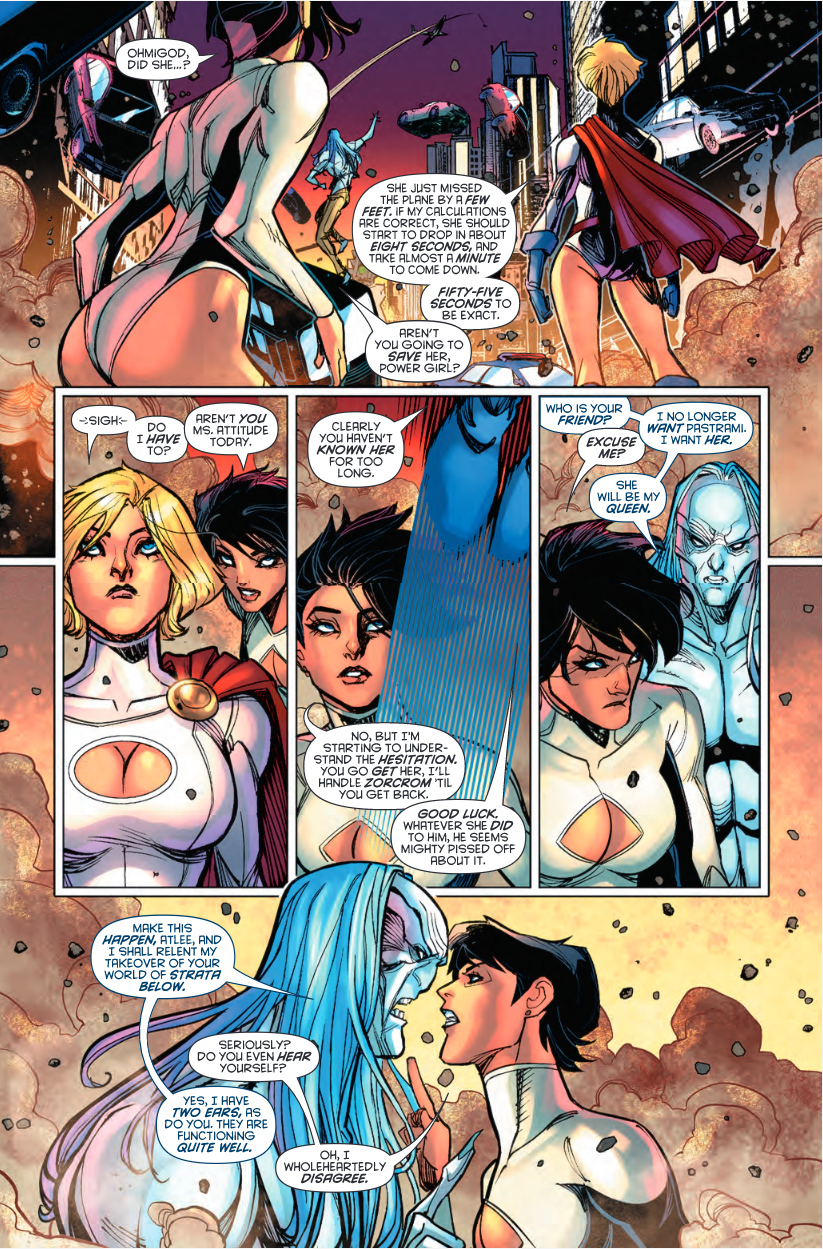 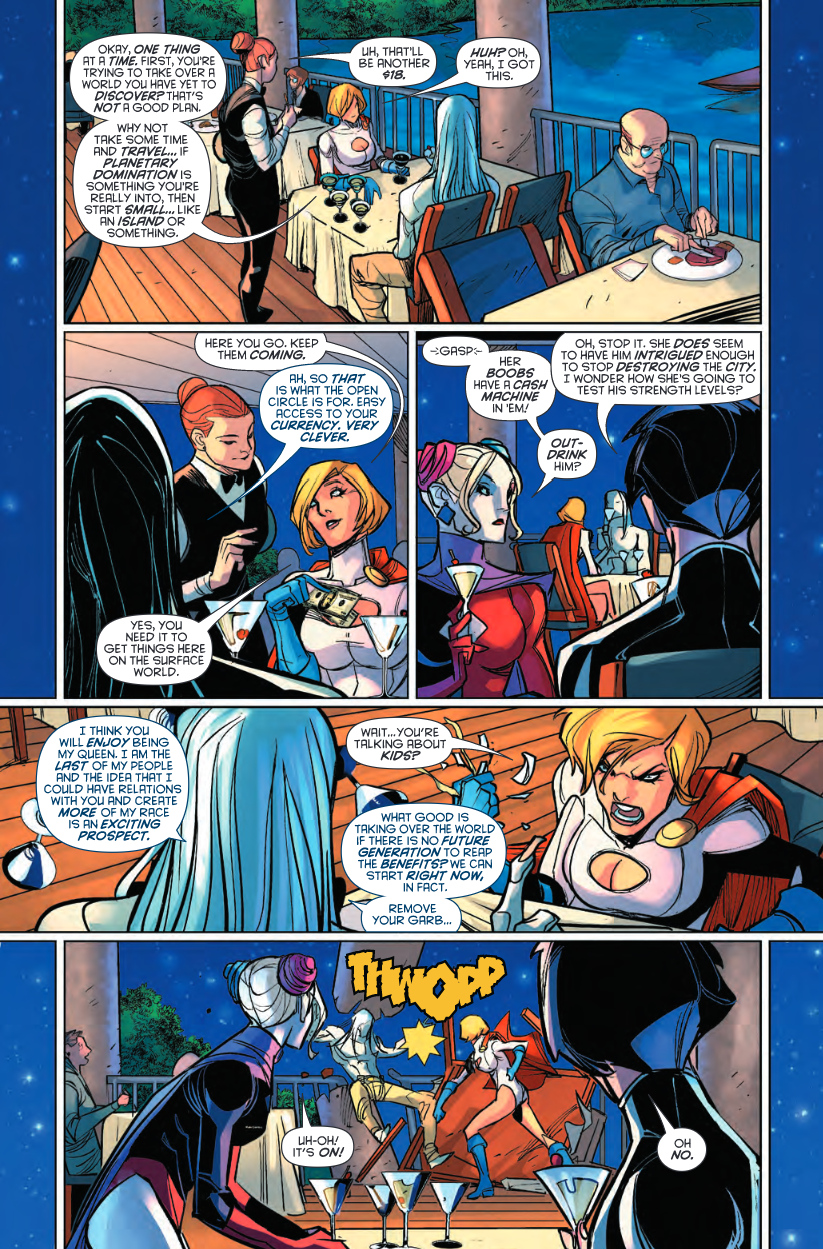 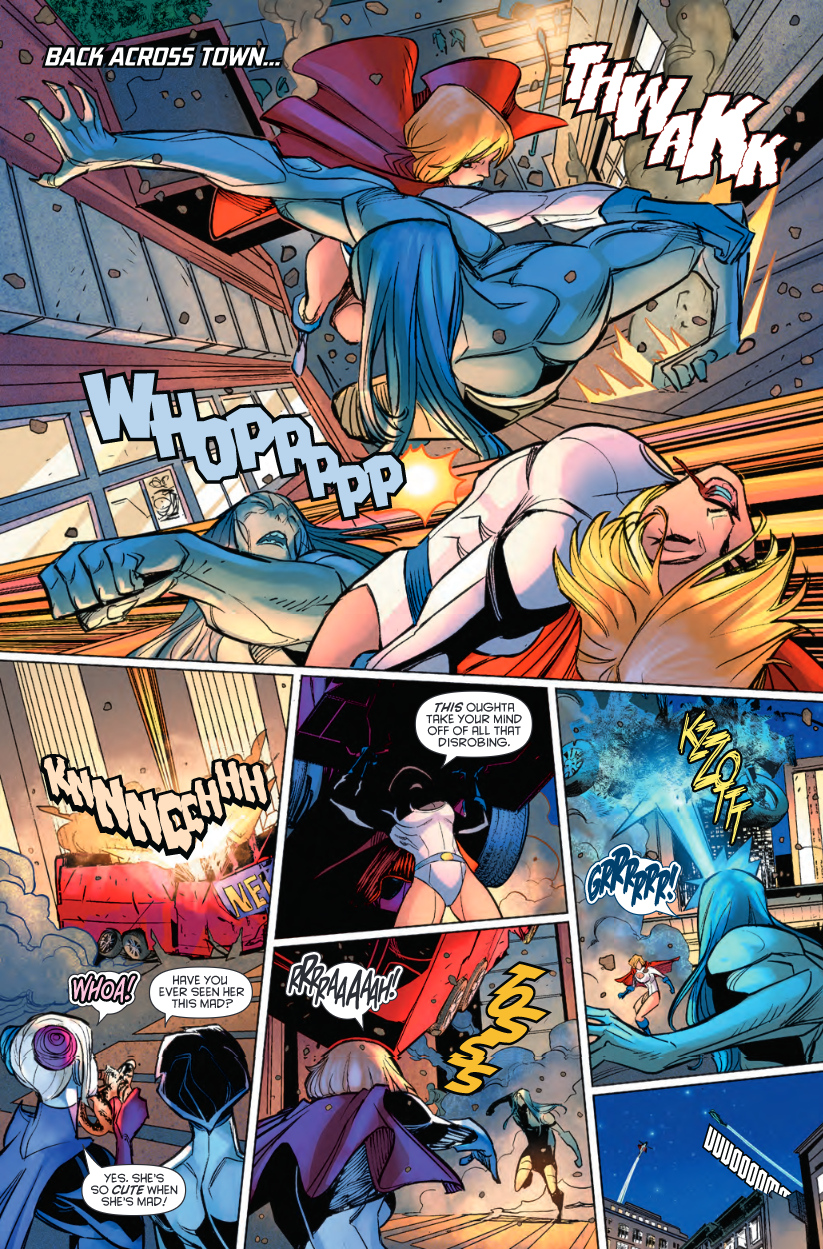 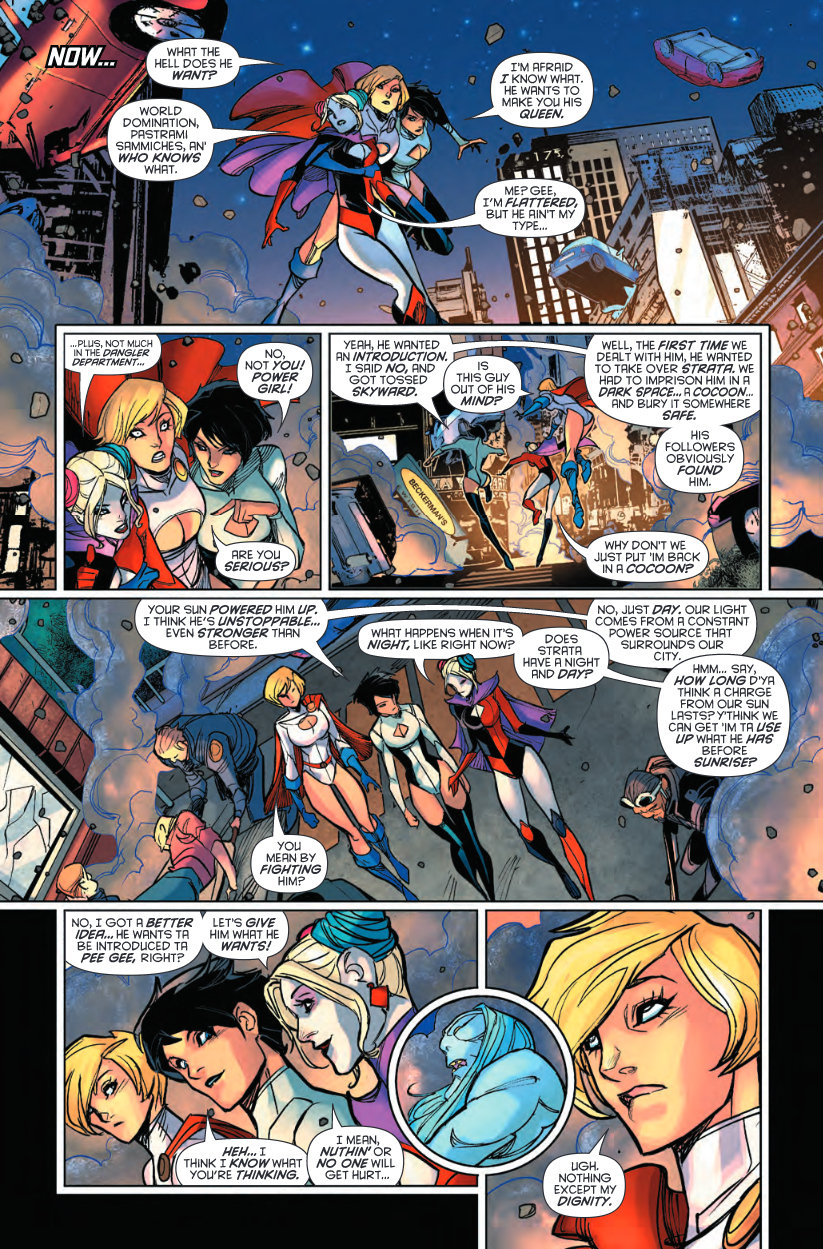 Fights against men and women are uncommon in comics, but here it happens and I’m not shocked. These girls are bad babes.

The ending is befitting a title that stars Ms. Quinn. The antagonist, after three issues, is hit by a bus. A rat comically runs off with his dismembered eye. Nice.

I appreciated this way of him leaving the arc. He was a ridiculous villain. His purpose was weak, he was too stubborn and proud to learn anything about this world, and no matter how much he was spoken to, he learned no tactics to improve himself as a villain. People like him are digging their own graves.

Harley: “Here she is, my beautiful, bountiful, guardian angel! I wonder if she gets sick a’ savin’ me.”

“I knew you could, ya big beautiful woman!”

I like the word choice. Power Girl is famous for her bust, but DC appears to be bringing in body positivity. They’ve been doing a great job stepping up their game with representation and working with empathetic characters. These words are unconventional. Harley is unconventional and that is why she’s precious.

Writing-wise, I find this an awkward, but enjoyable, story arc. The transitions from the past to present were confusing at first; it was hard to tell where this story was going from part one. The final issue does an okay job at tying everything together. A little far out, but an enjoyable side-story. Not to mention the amazing diversity of characters: two LGTBQ characters of colour. In addition to one of them, Devani, being a fighter to see who’s the biggest Batman fan: all good stuff.

John Timms and Joseph Michael Linsner team up in this issue. Their work is beautiful, the faces are attractively distinguished and symmetrical. A pleasure to the eye, however this issue is lacking a few things. Colours are mild and not as eye popping. There has been an amalgamation of artists working on the Harley’s comics, so consequently, that could be a reason as to why the transitions aren’t clear.

Another difference with this issue versus others is that the panels have expressionless faces. This tactic allows an imagination regardless of intention. I appreciate the lack of gore and tortured faces depicted.

But I will quote the doctor herself:

This series is extremely entertaining. Harley had caught my attention since the 1990s. I can’t imagine a moment where she wasn’t entertaining. A comic of her being the title character can be summed in one word: fun. Even next to Batman, in DC’s Christmas Special, she helps him break into (one line) a Christmas carol. That’s talent! The story is slightly staggered, but they are building up to a deeper meaning and desire. This being only issue 16, I know there is much more coming.