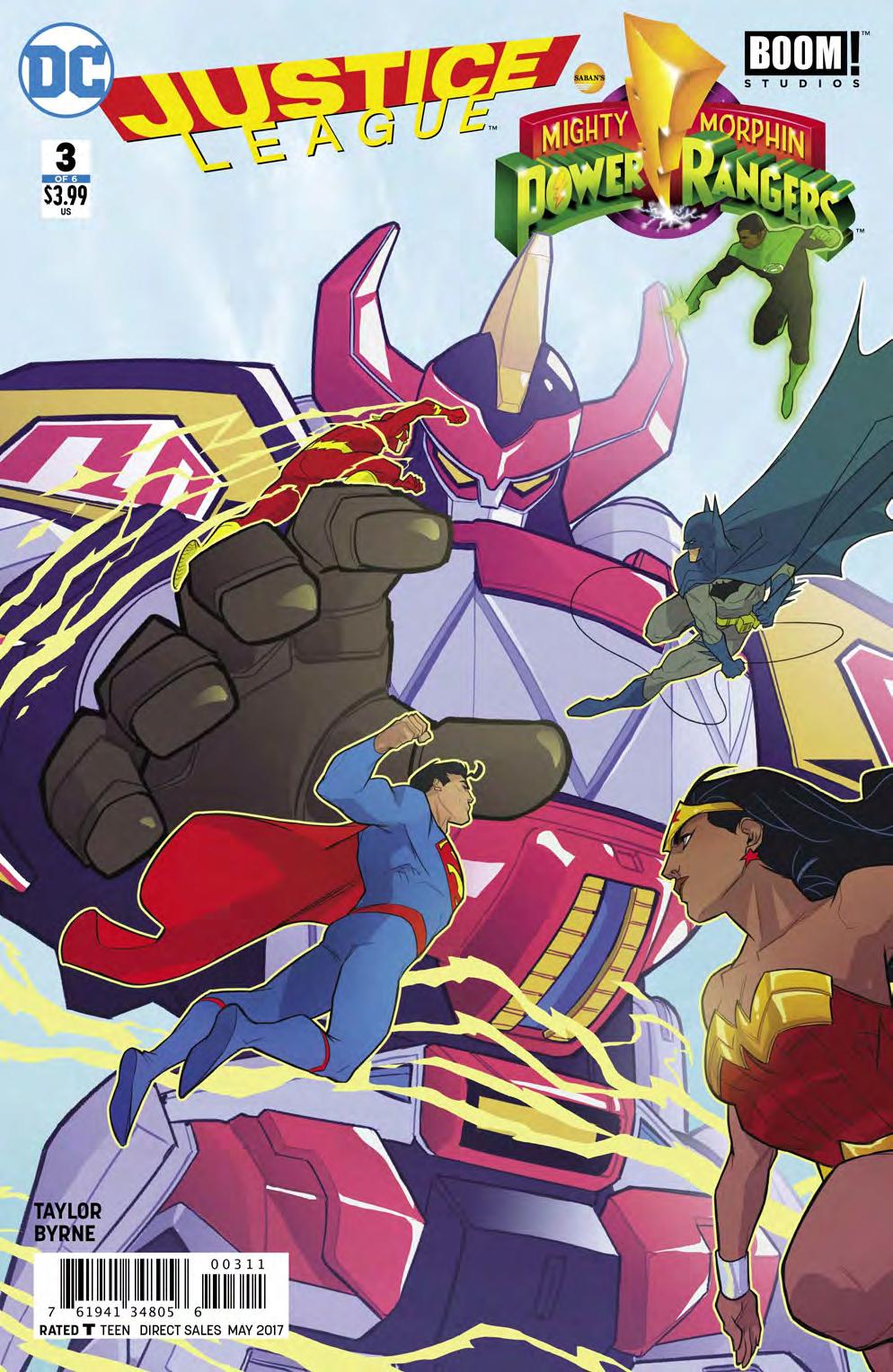 DC and Boom! Studios gives us an unexpected crossover, bringing together two of our favourite franchises perfectly. The Justice League teams up with the legendary Mighty Morphs, brought to life by Stephen Byrne through eye-pleasing art, and breathtaking matte colours; this series is a delight to read. Appealing to the child in all of us with a blast from the past – the first to begin the Power Rangers series in 1993, the Mighty Morphs – this comic series is inspiring and entertaining.

In this third installment, the Mighty Morphs are trapped in an alternate universe. Having to acclimatize to the strange ways of this new world and the dynamic combination of individuals from two very different worlds, this process is no picnic for either team. The challenge forces the Justice League to take an overview of their own strengths and weaknesses and to evaluate and rearrange the dynamic of their teams. Consequently, we have a sort of family dynamic formed. Batman getting huffy, lecturing the teenagers; Wonder Woman going maternal on the Pink Ranger; Superman being the team’s leader in cheer; Flash attempting maturity (and I use the term loosely with Barry) when interacting with the young Rangers; Cyborg and Lantern taking on the role of older brothers. The two groups form relationships that draw you in and display nuances to the characters seldom exemplified so well.

Tom Taylor manages to keep the innocence of these characters, with adorable comic relief sentences that don’t take away from the serious goals of the heroes. He doesn’t downplay how bad these villains are: Lord Zedd, Zords, and Brainiac, oh my! They need the entire extended Justice League. And some help from the younger generation.

What is significant here is to see these Leaguers – ranging in age from mid-20s to late 30s (and Hera only knows where Wonder Woman fits in there!) – working so well with teenagers. I believe this is important to recognize; this is the challenge facing our own world. The older and younger generations in our society, especially the dichotomy between Generation X and Millennials, seem to be at a loss for words. We’re trying to figure out how to work together, with each side having to compromise. This comic exemplifies this contention. 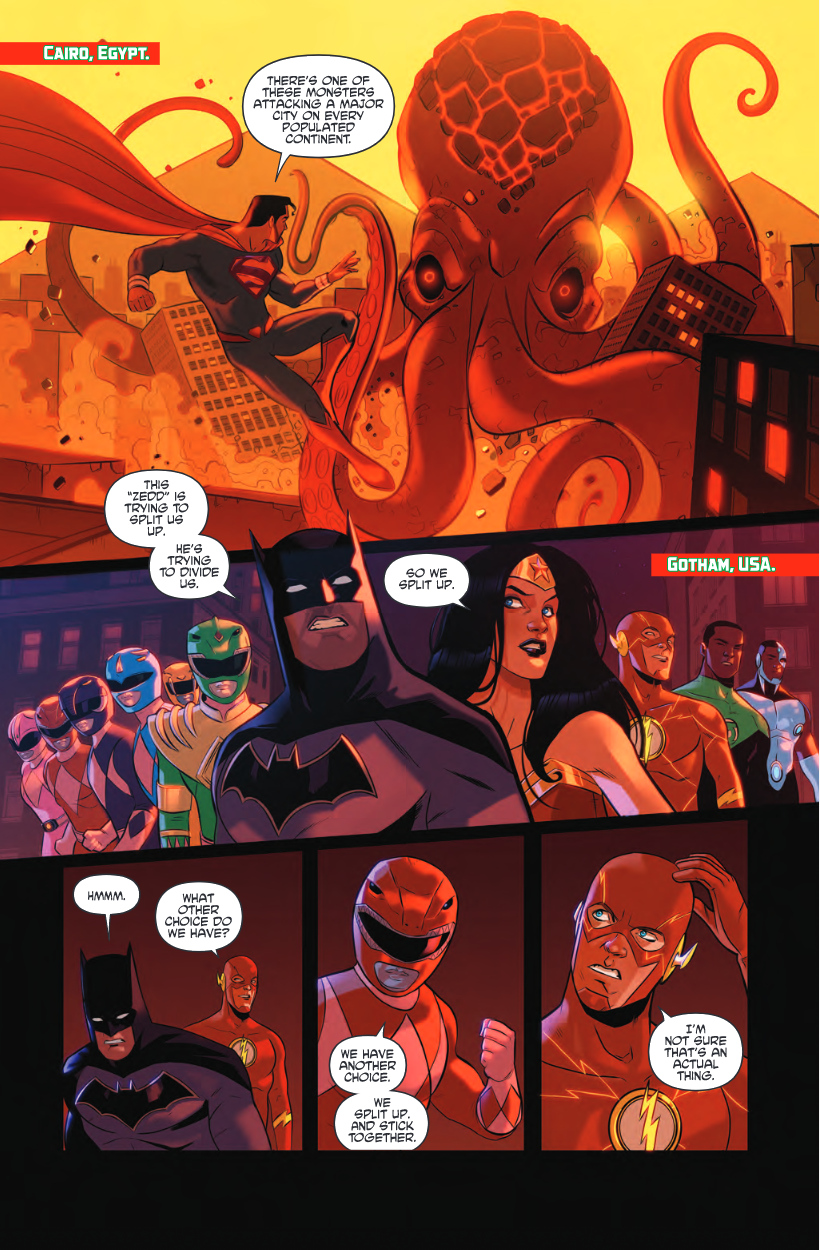 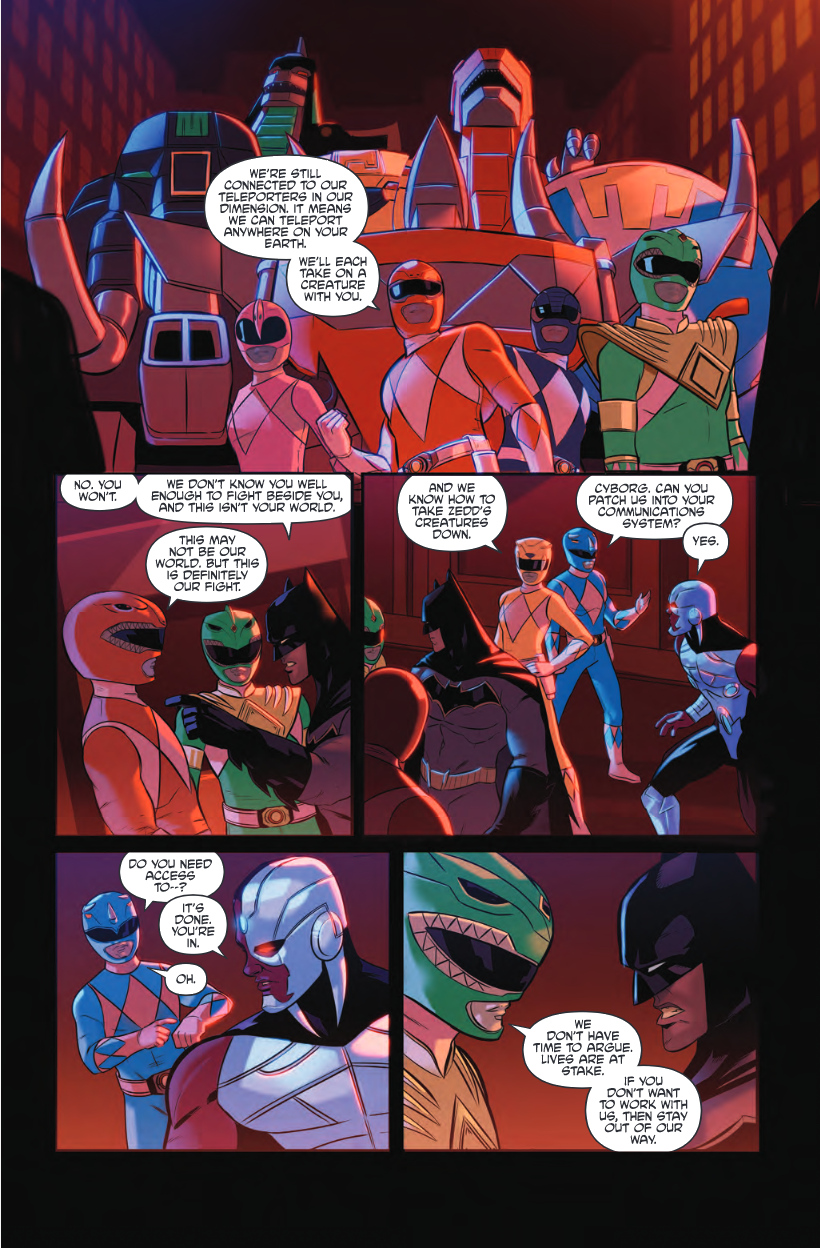 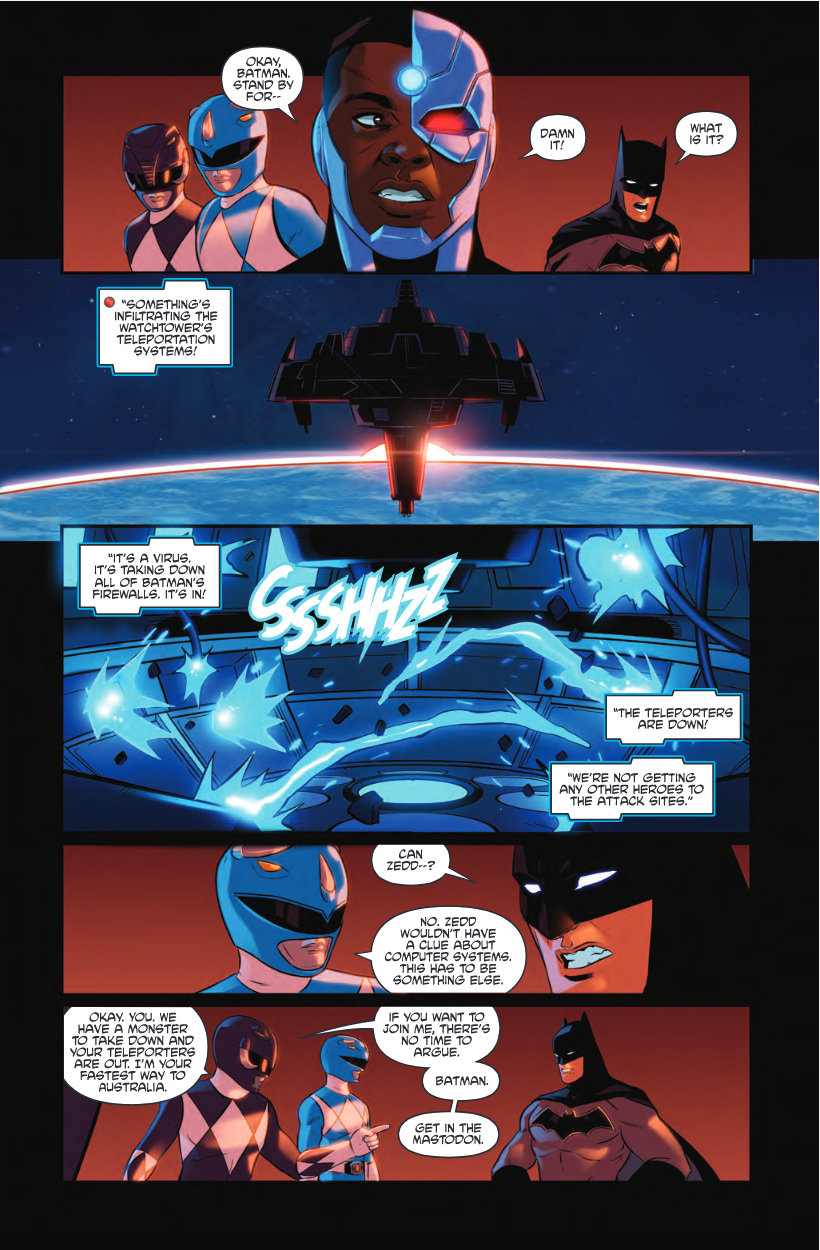 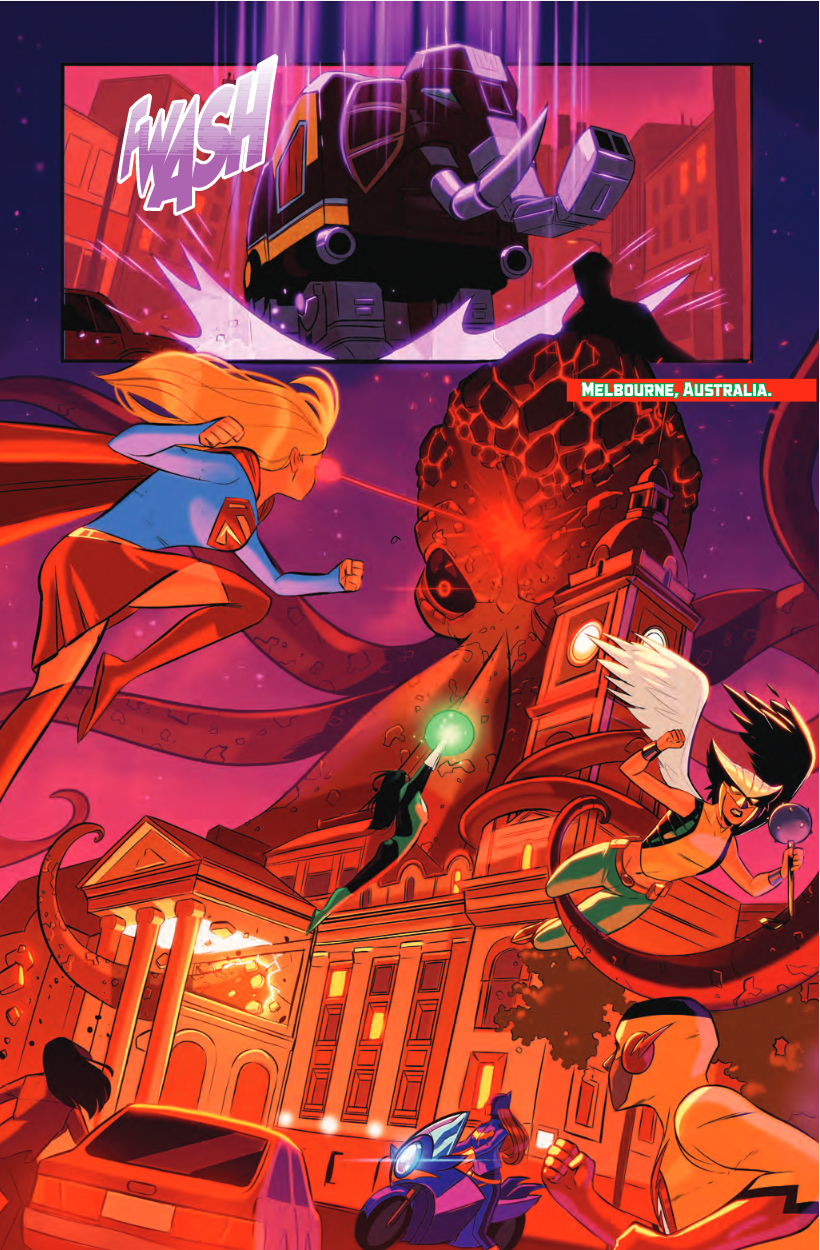 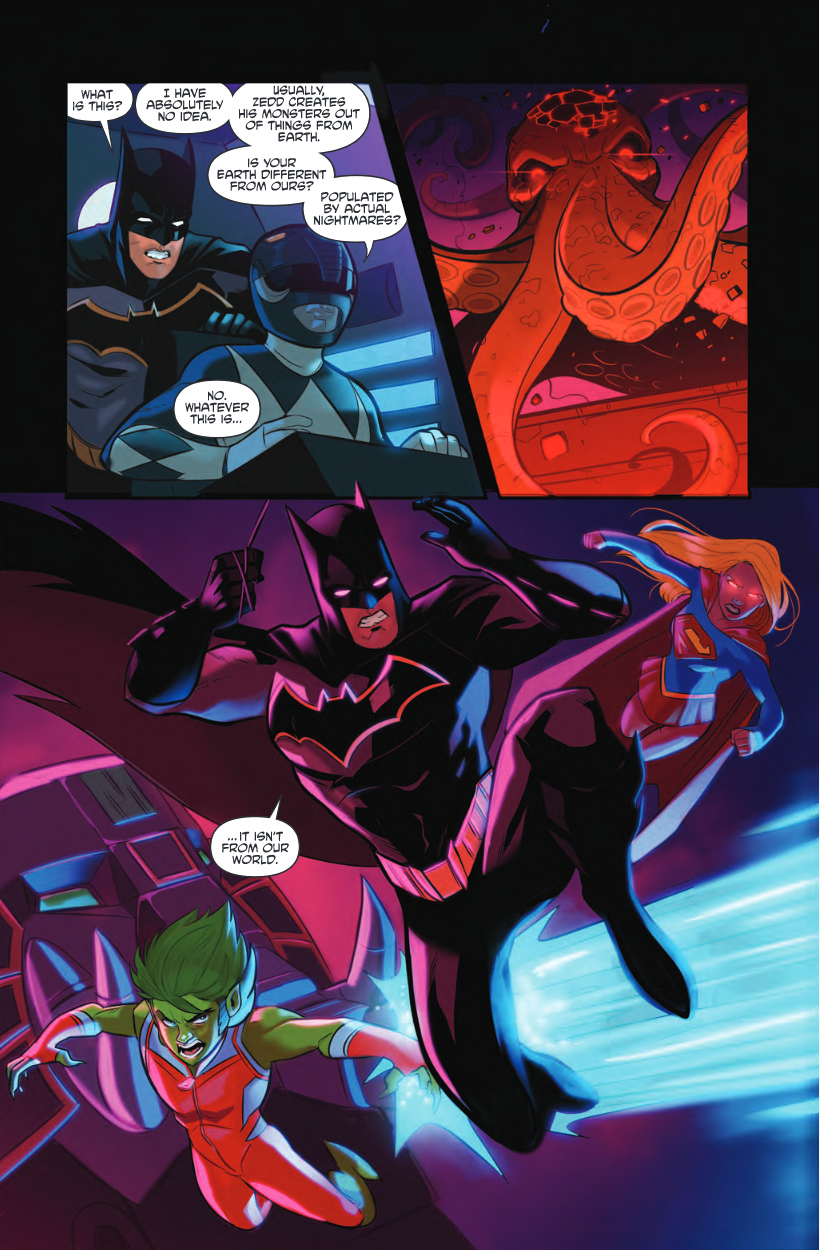 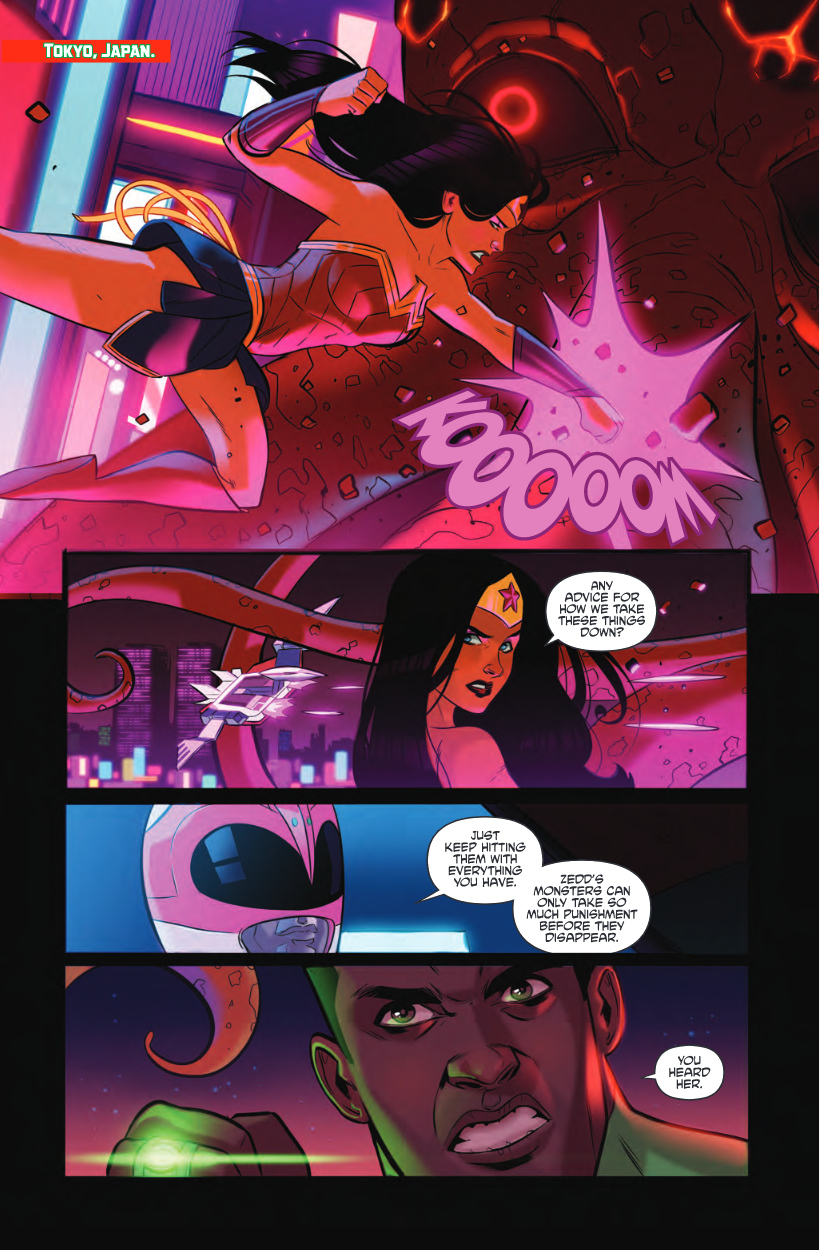 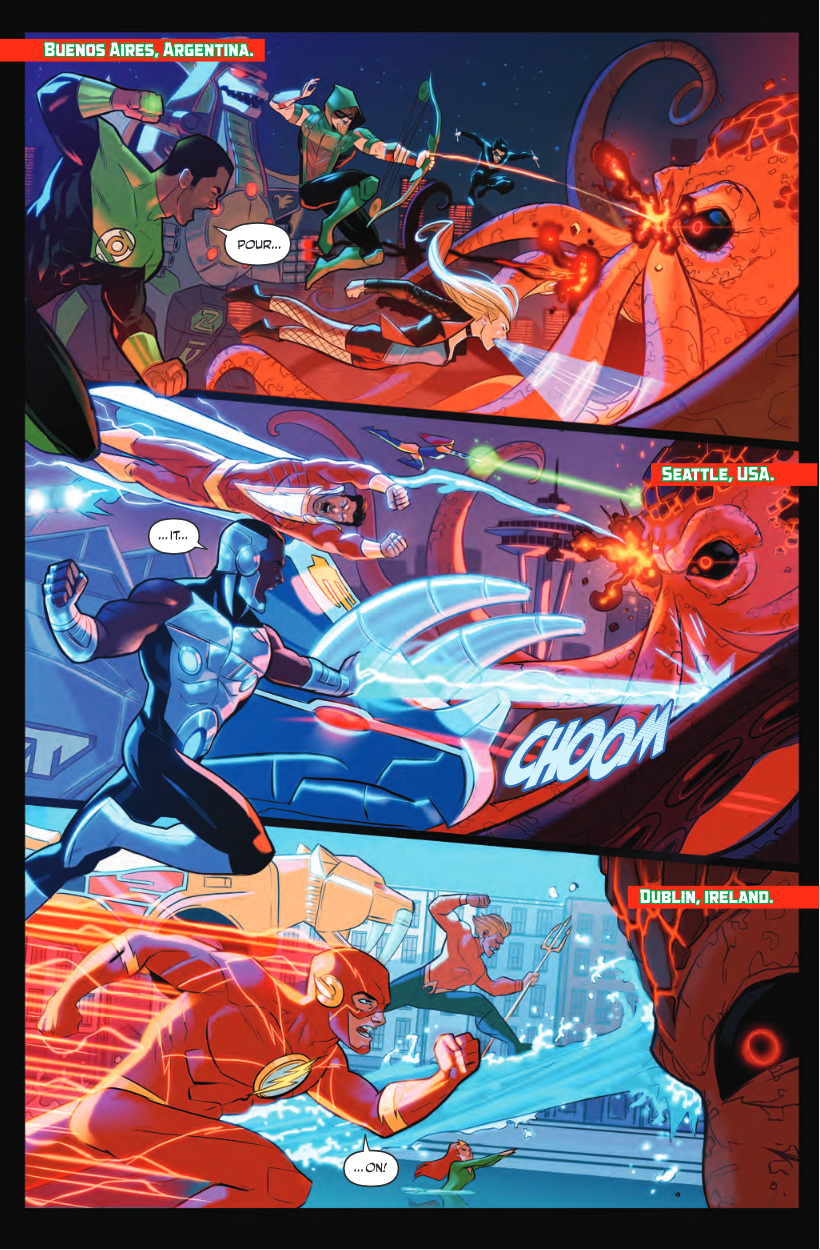 Batman struggles to trust the Rangers at first, Green Lantern comments on their age, “I can’t believe how young they are.”

The youth are absorbing information at a higher rate than any other generation, but there is much more expected of them. The League accepts the Ranger’s ideas. There are struggles and flaws with their plans, but the Justice League is there to help them look critically at their suggestions. But mostly, they’re there to pick them up when they fall. It’s a message to the children reading this: yes, you will be strong, intelligent and can own the world, but there will be heartbreak and defeat. And the minute you begin to sink? We are here to help you back up. Just ask. Superman comforts the young team, “Zedd isn’t your villain. You are not responsible for the mayhem he causes with the power he holds.”

Supportive superheroes are the bomb!

This issue seems to be the down point of the fight. Brainiac and Lord Zedd have bested them, but the moral of every superhero is to not lose hope. Where there’s a will, there’s a way. And if some have lost their will in a moment of trouble, there are others on your team to lift them up.

I love the innocent story juxtaposed with the action filled art style of Byrne. Each image is filled with impact, and it’s impossible not to have your eyes drawn to the colours. The hues of red and purple expand on the action. As the story progresses and the heroes are losing hope, the palette changes to hues of calming blue conveying the seriousness of these panels. Then at the end, yellow. Hope. Readying us for the climax, half way through this six-issue series.

We’ve already seen them fight: the Justice League against Brainiac, and the Might Morphs battling Lord Zedd. The combination of them is a thrilling joy to read. I had been waiting for this series the minute I heard of it. I suppose for nostalgic reasons, as well as the art looking so attractive. We can expect that the next issue will begin the climax, and although predictable, during these struggling times, we can never get enough of team ups and taking down villains. We need it!