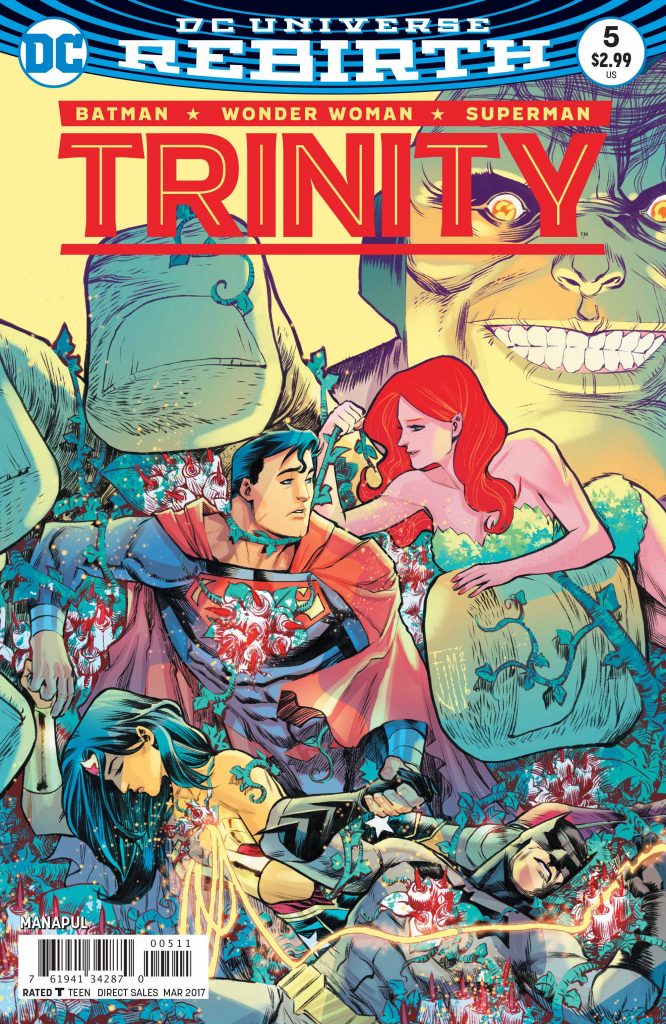 Francis Manapul’s story takes an interesting and unexpected turn in Trinity #5. Readers learn Poison Ivy has been chosen to protect The Green—an elemental force which connects all plant life. It has given her a new ability to consciously enter her own dreams. In this dream-like state, Poison Ivy unknowingly enters the dreams of another and is introduced to a seemingly innocent child. However, this child is unlike any other – and quickly becomes central to Trinity‘s tale.

In addition, readers learn the heroes are trapped inside the dreams of the villain, Mongul. He has taken advantage of Poison Ivy’s love and knowledge, then quickly cast her away. As a result, Poison Ivy longs to reconnect with the child she encountered in the dream, believing she still needs and loves her. In addition to influencing Ivy, the child inhabited different characters in the visions of the past—the child in Smallville, the psychiatrist in Gotham, and the queen in Themyscira—learning the deepest desires of the heroes. 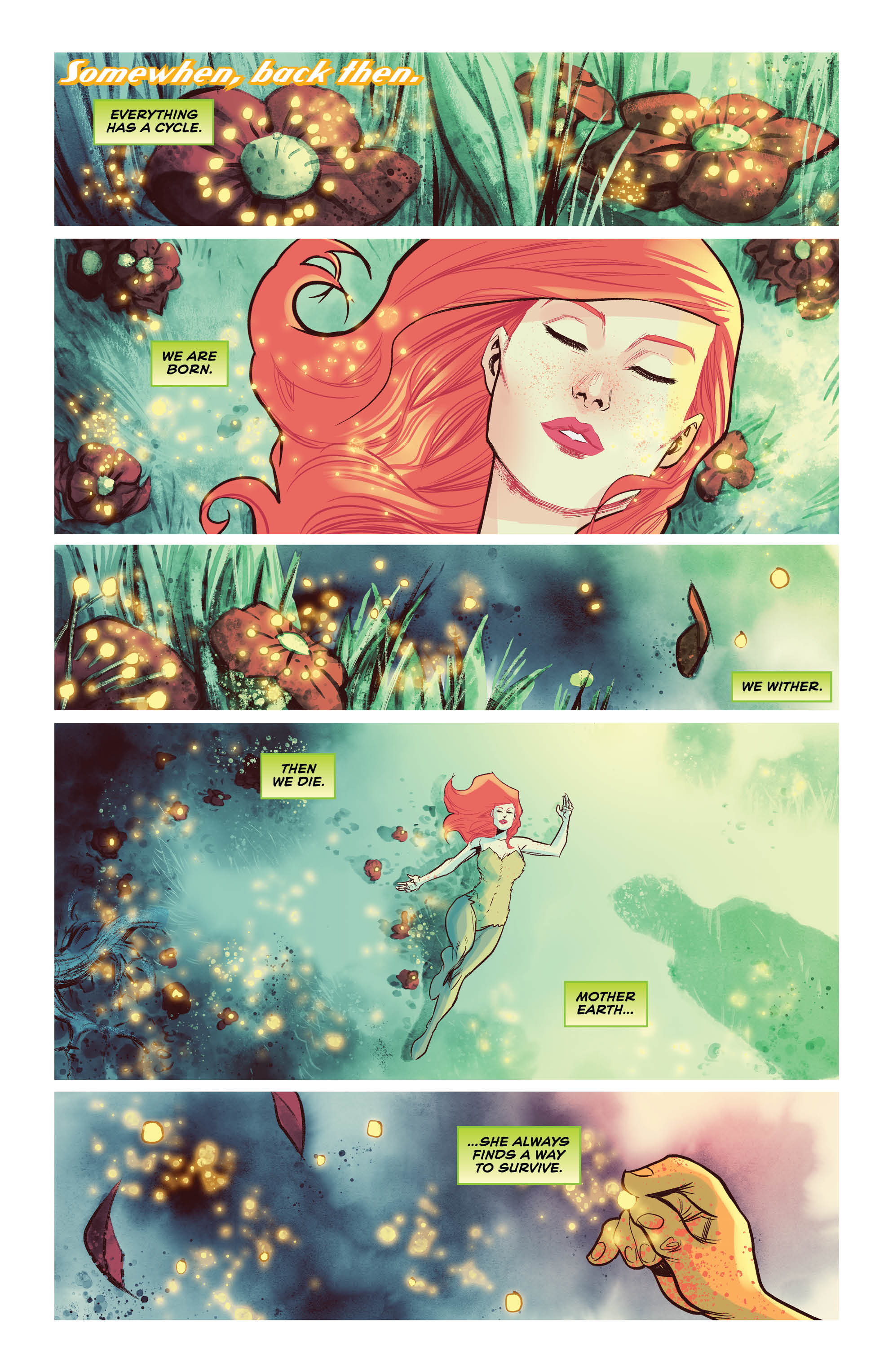 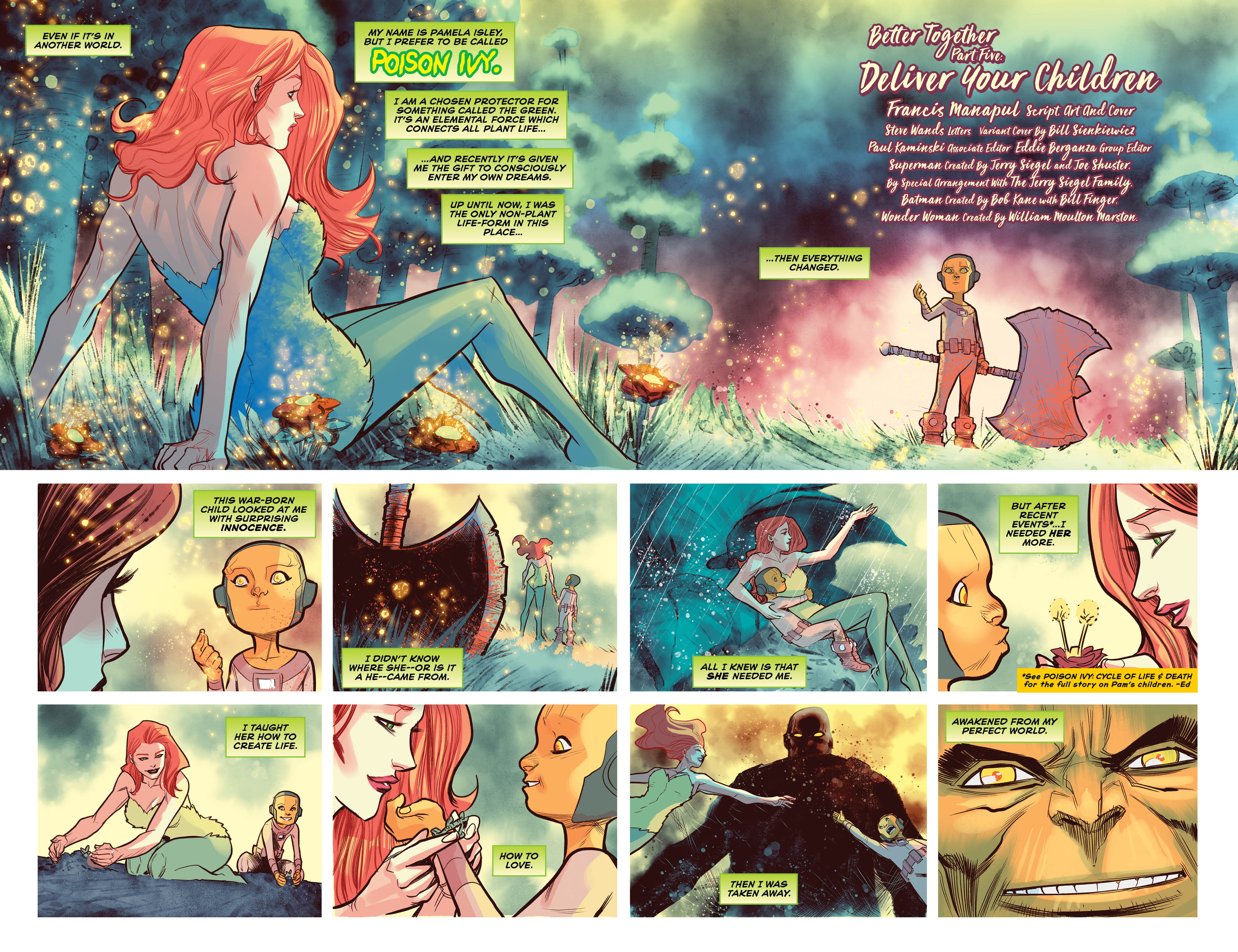 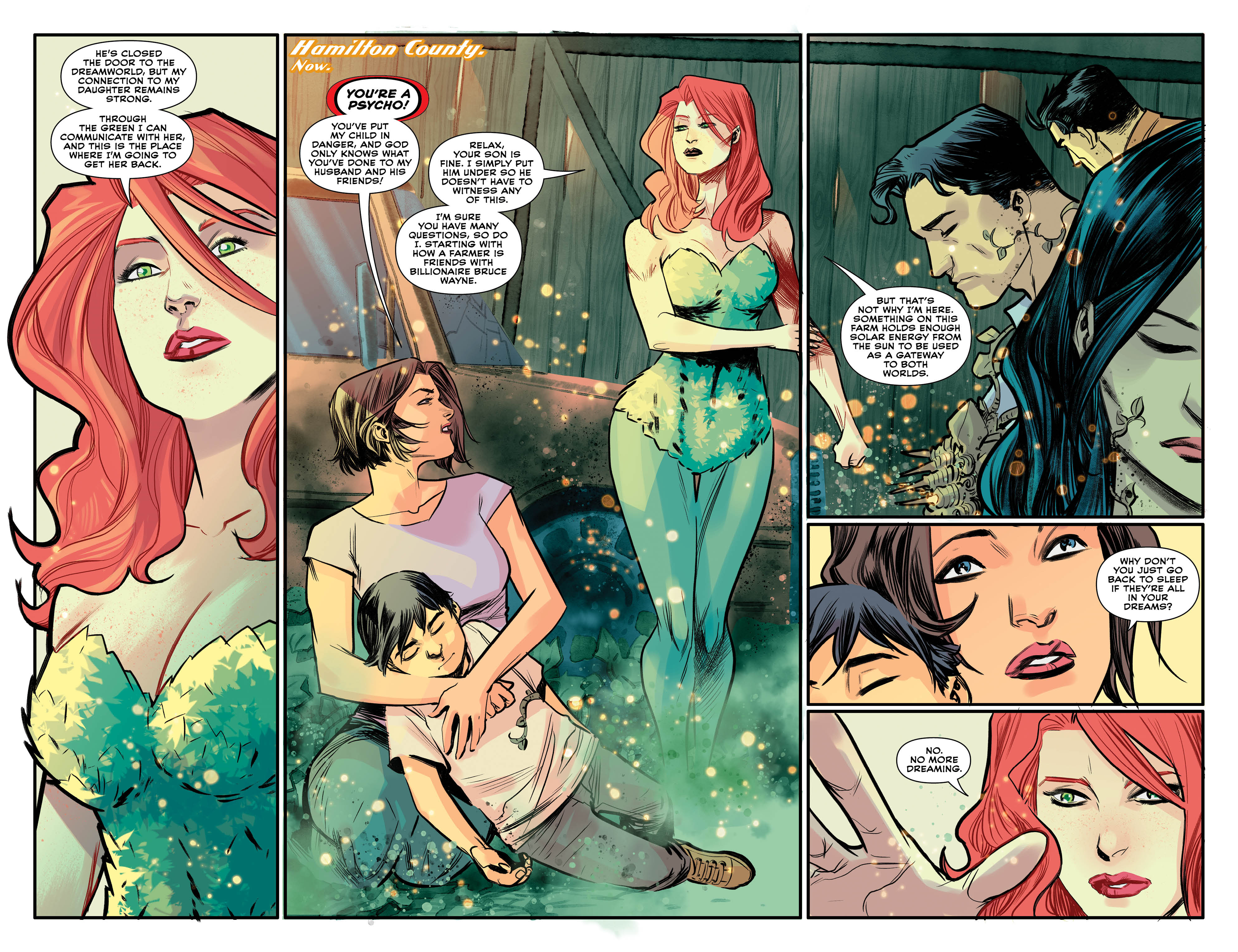 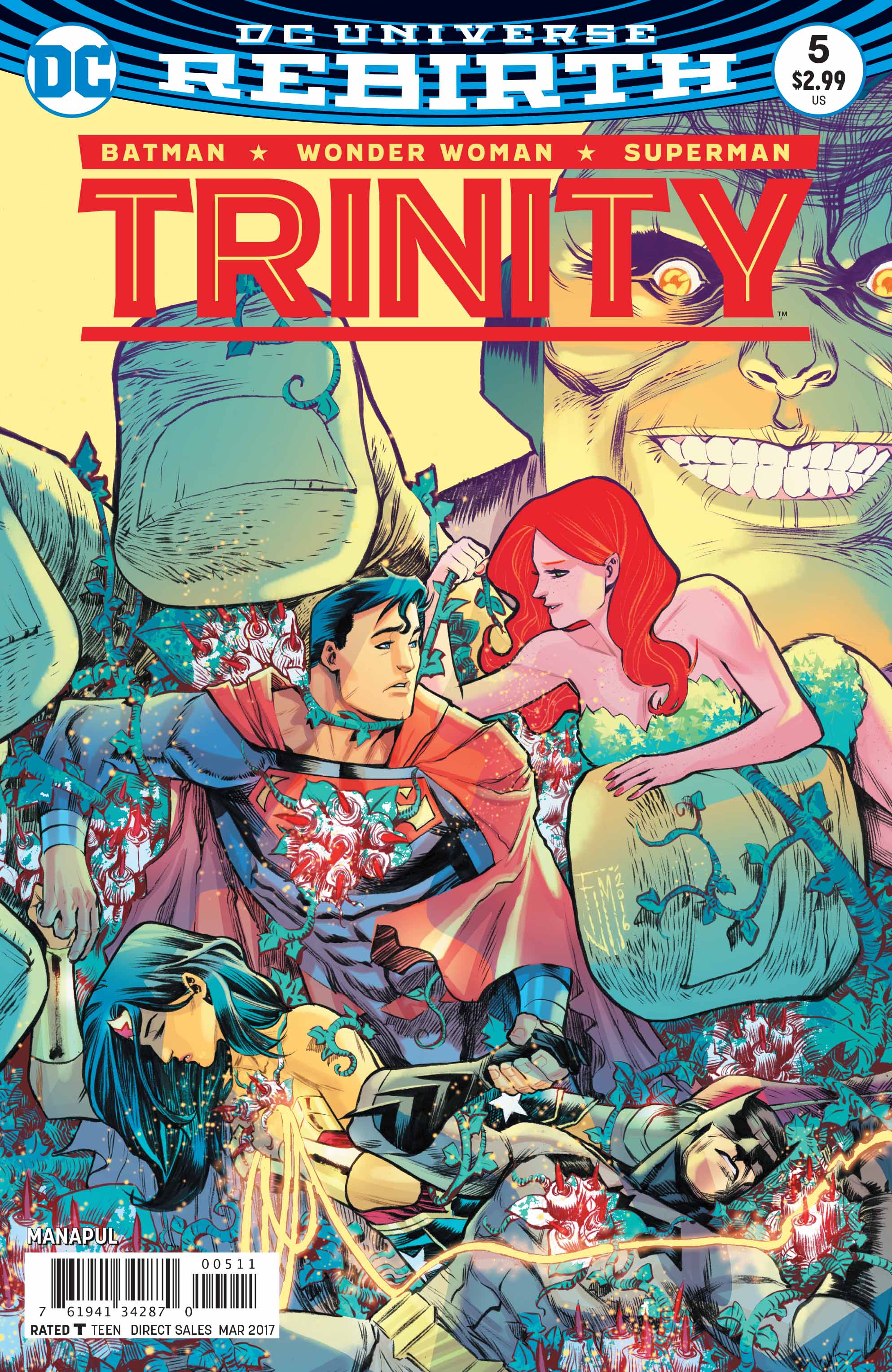 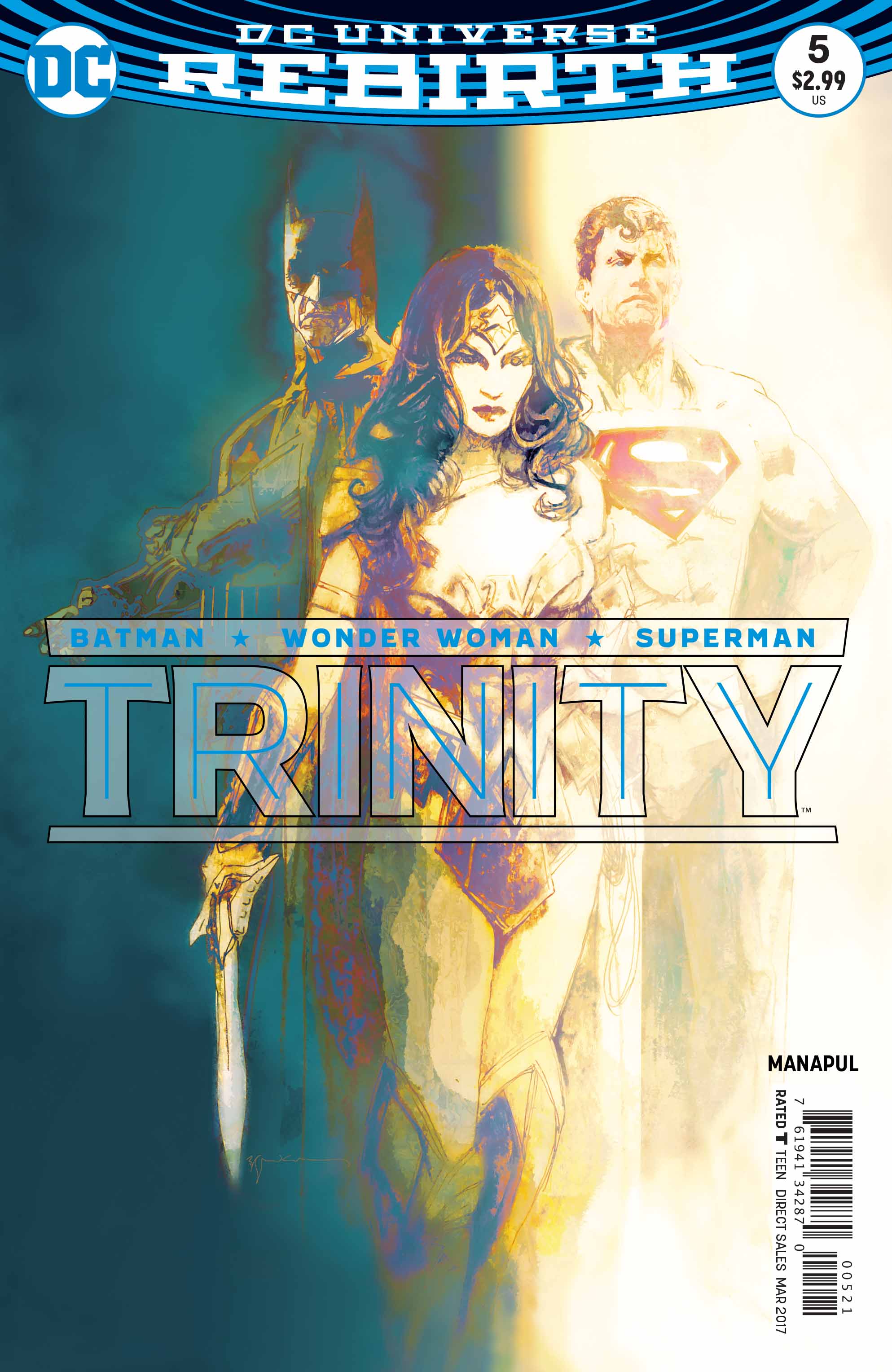 Poison Ivy is attempting to make dreams reality by guiding her ‘child’ out of Mongul’s dream world. Her plot relies on the uncharacteristically high levels of solar energy emitted from Clark, Bruce and Diana. While creative and interesting, the author places Poison Ivy in an unenviable position. Her inability to connect-the-dots as to the true nature of these empowered heroes causes her to lose some credibility. She acknowledges the seeming coincidence of their gathering on Kent Farm, but fails to put the clues together.

Despite this, Manapul depicts Poison Ivy as a loving and caring character – a sympathetic character. Her methods are questionable, but her reasoning is certainly understandable. Interestingly, with the exception of Lois and Jon Kent, all the characters in Trinity share a common goal. While their perspectives and motivations differ, all the characters seek to escape a dream world.

The art in Trinity #5 is exquisite, combining fine detail with vibrant color. The texture creates the perfect dreamy frame against which the story and panels intertwine. Each panel is stunning and yields new depth with each reading. It’s simply beautiful work.

The narration in Trinity #5 is dense, giving readers much of the back story behind Mongul’s plot. At the same time, inclusion of the dream-world child was a bit off-putting and flung the story sharply in an unexpected direction. Perhaps the follow-up issue will pull the pieces together in a unique blend, but Trinity #5 felt like a stark departure from the first four issues.

Trinity #5 was an enjoyable encounter with a uniquely sympathetic and humanized villain, Poison Ivy. The issue is absolutely stunning and smoothly paced. However, the trajectory of the story veers sharply. The true nature of Mongul’s plot and the roles Batman, Superman and Wonder Woman will play in them remain unseen. The addition of a new character added emotion, but raised more questions than answers. Still, Francis Manapul is a trustworthy creator/artist. I suspect the story will progress seamlessly in subsequent issues, but this one felt disjointed from the others. Despite lingering questions and seemingly new direction of the arch, the beauty of Trinity #5 earns it high praise.