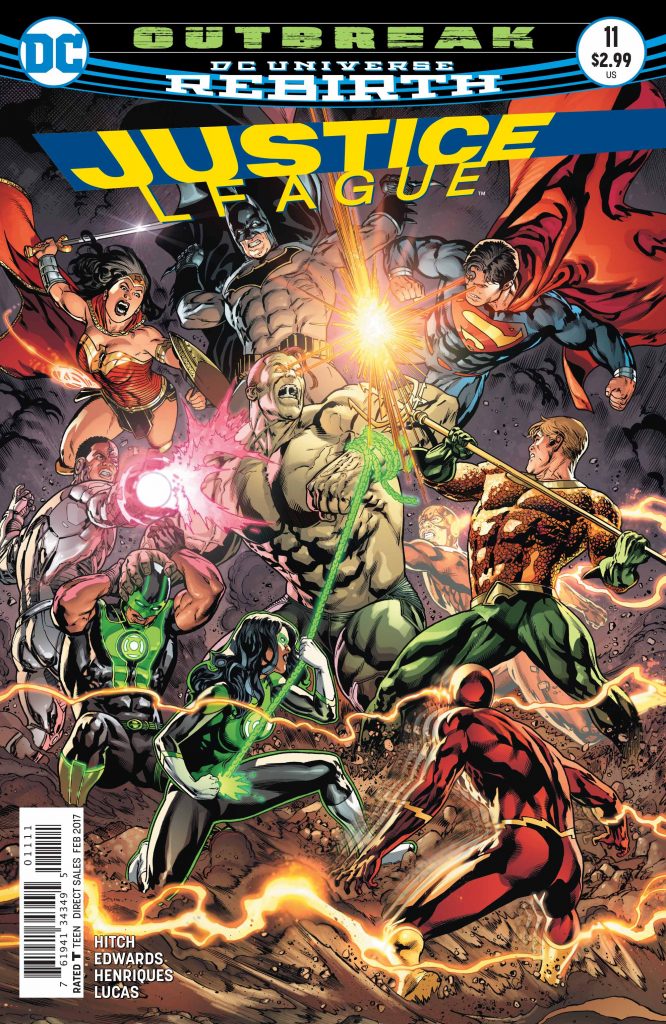 Coming to a close here in issue 11, “Outbreak” has been a helluva ride. The pacing throughout the entire story has been excellent, with nothing feeling too rushed, and this combined with the writing from Hitch and the art from Edwards has presented one of my favourite Justice League stories of the modern age. In this concluding issue, it’s all-out war between the Justice League and most all of the villains they have faced over the years. There are simply too many to list between this and the last issue – it’s like a who’s-who of the Justice League’s Rogue Gallery. I knew that this issue would be a challenge for Hitch and Edwards, as a believably written 20-something to six fight is difficult to pull off, but then I remembered we are dealing with the Justice League. Thankfully, this final issue keeps up with the previous entries and tells a well-paced out story with a satisfying conclusion.

Watching the League use the villains powers against them was brilliant fun, even if the premise is a little silly. These villains are fighting over control of an iPad – this is truly the modern age of comic books. Even though I am happy with the payoff that this issue provided, I would’ve liked to see the fight once Amazo began to help the League out. I know at that point there is no way they could lose, so the jump to the aftermath wasn’t too jarring, but at least a little action would have been good. Despite that, this issue is otherwise filled with action. On every page there is a new villain that one of the members is fighting, and it’s a wild ride from start to finish. 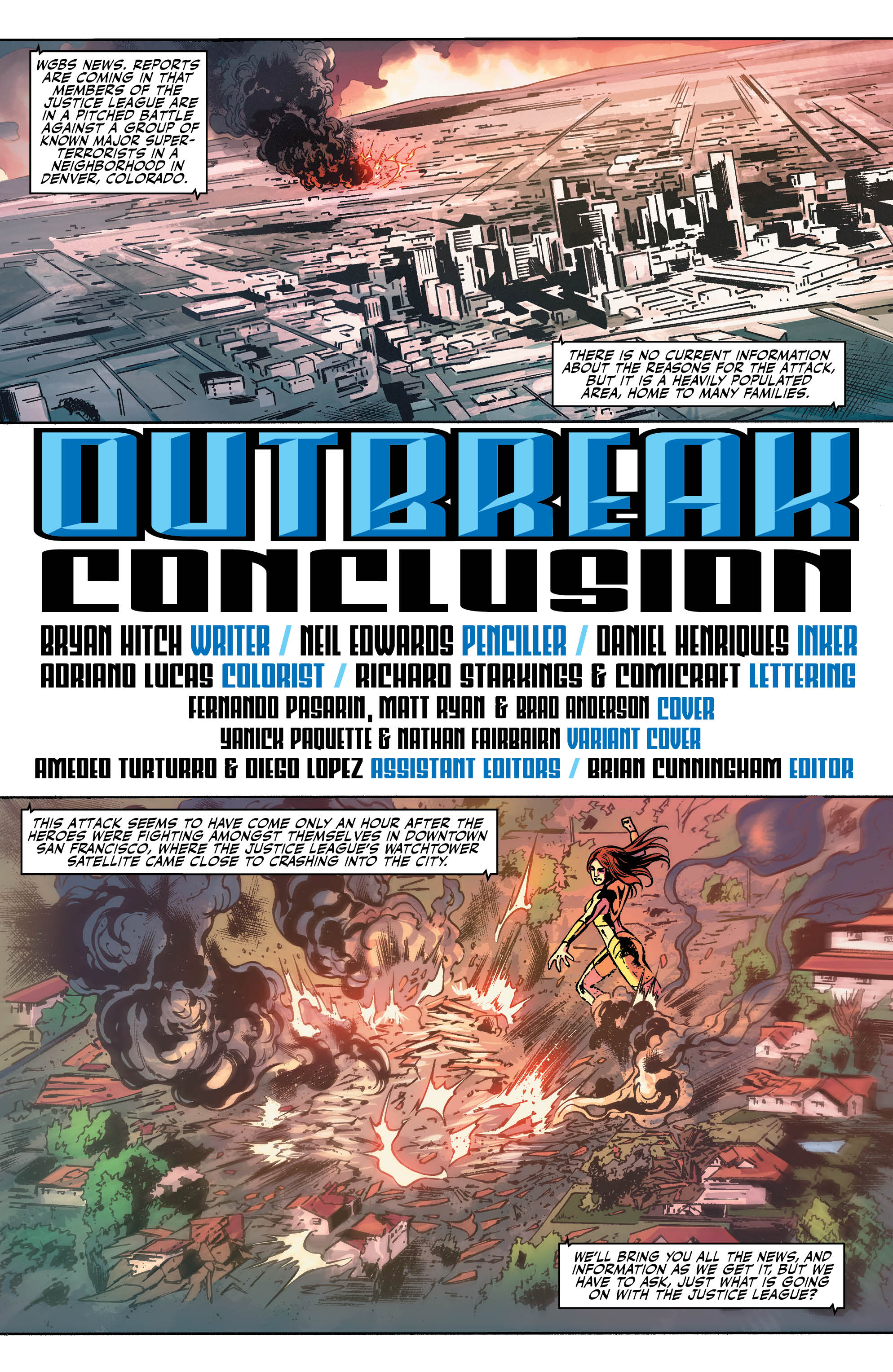 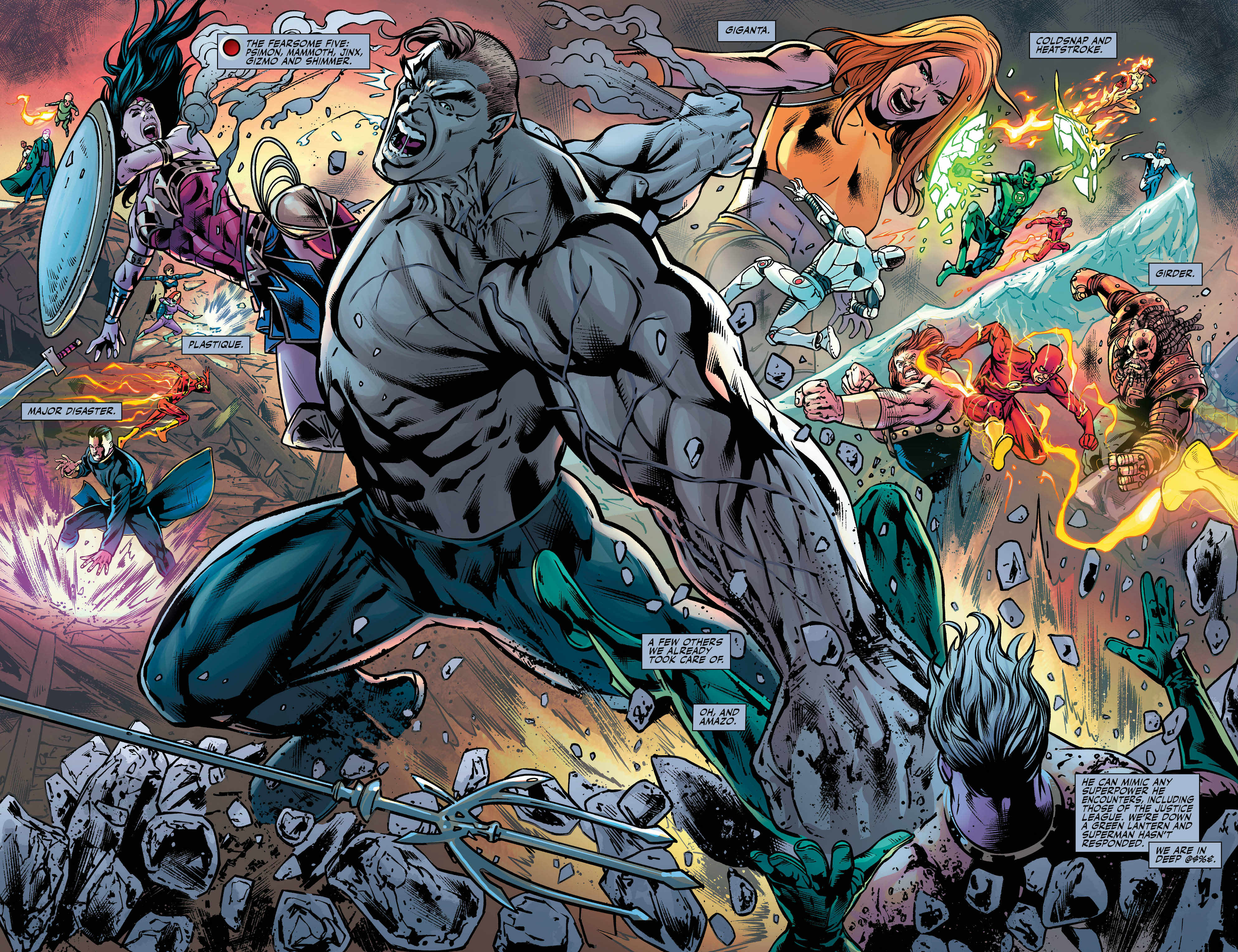 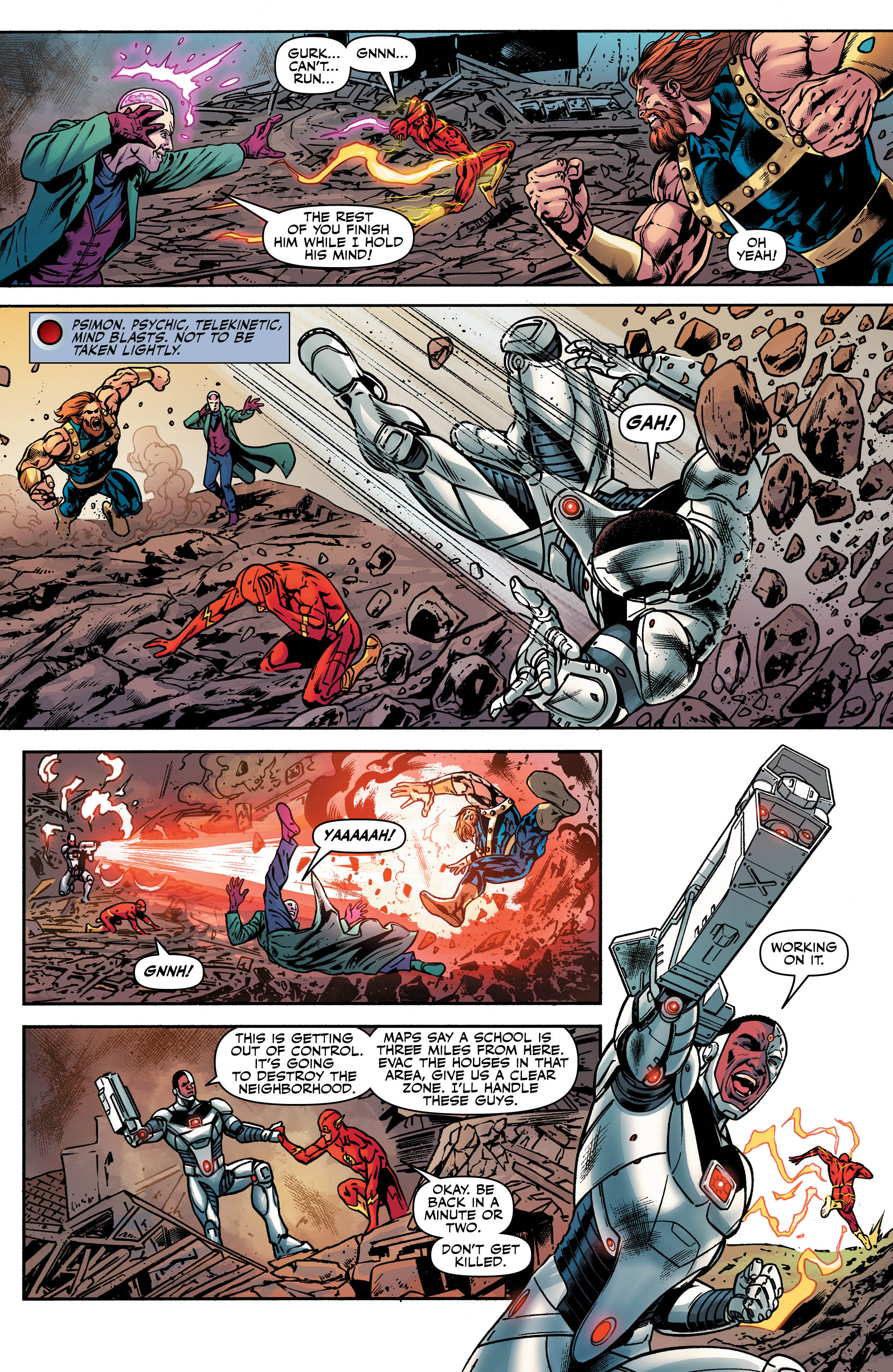 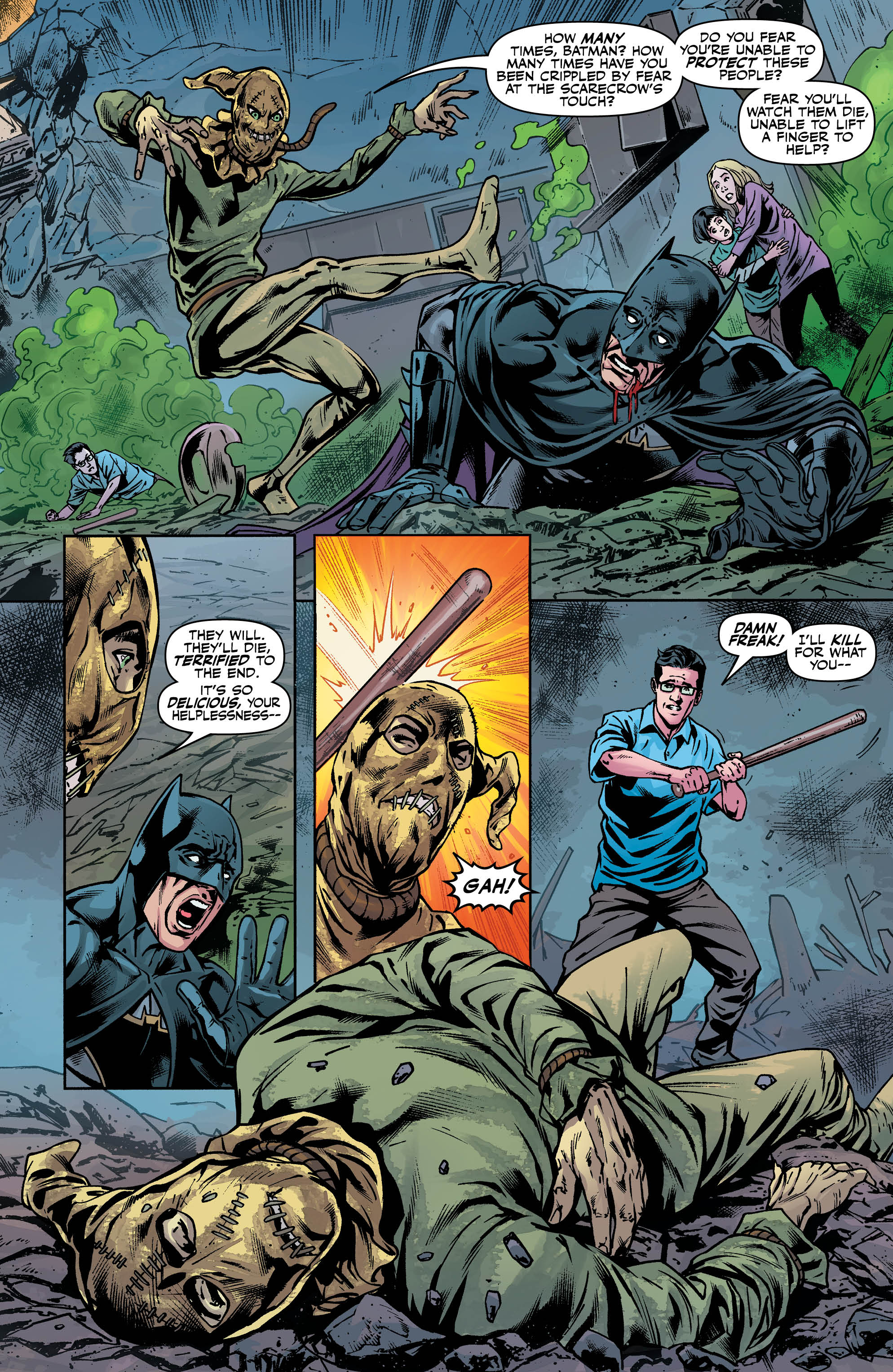 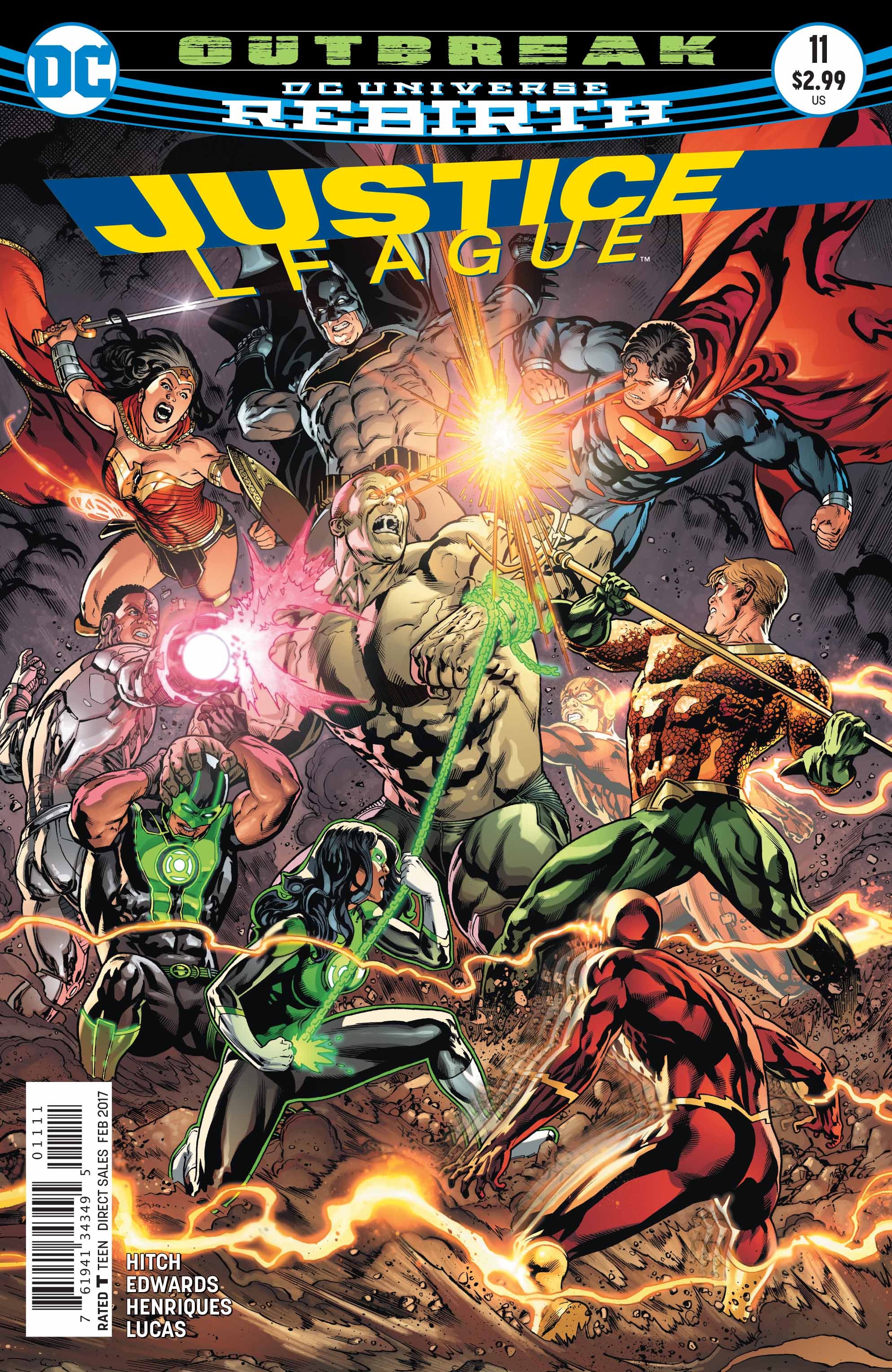 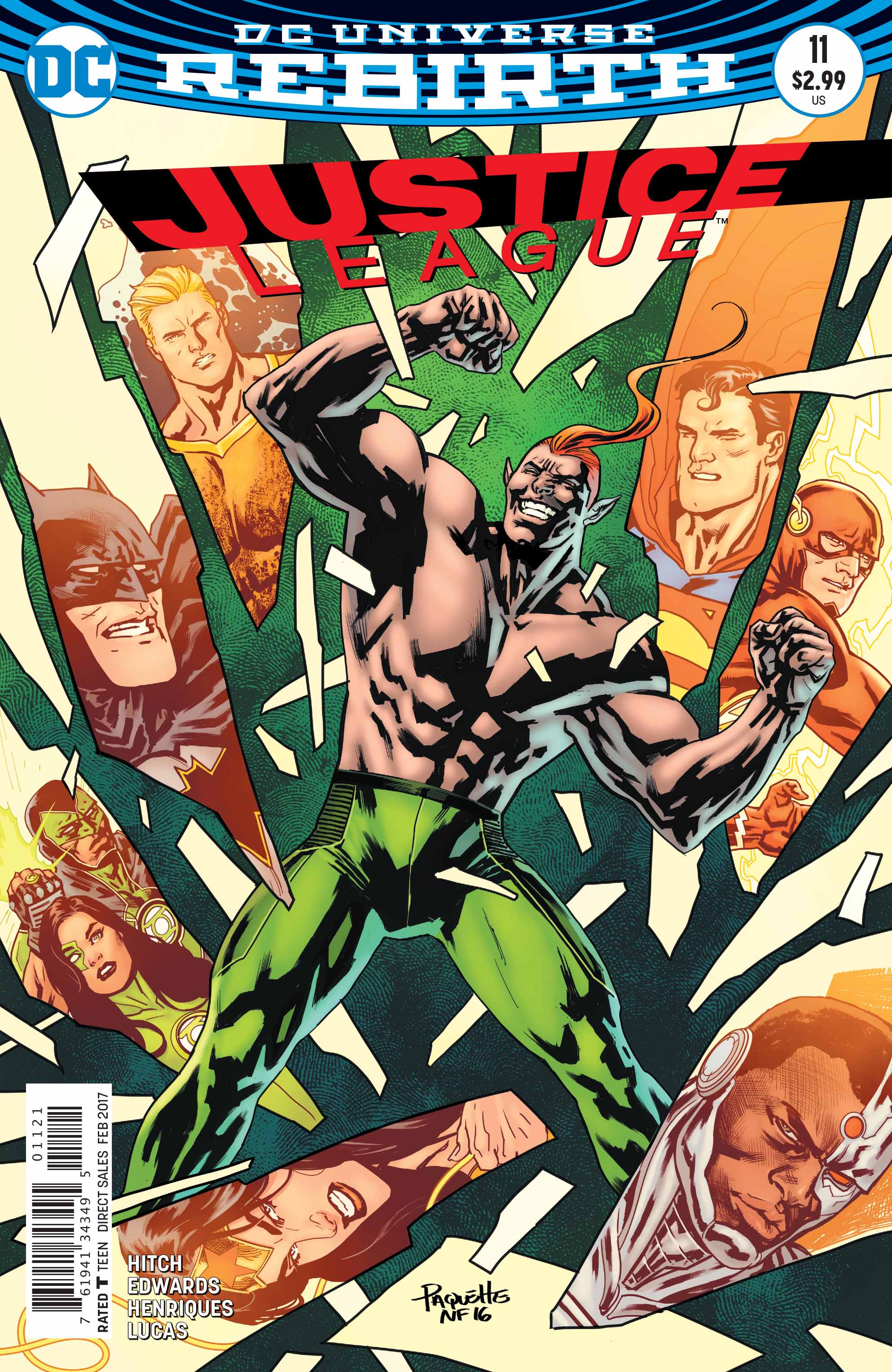 The ending of this arc provides a strong set-up to the “Justice League vs. Suicide Squad” crossover, with the next issue of Justice League being a tie-in. In a way, watching the League tackle this list of (almost all) low-grade villains was a nice little prologue of sorts for the storm that is about to happen in Rebirth’s first major crossover. While many haven’t been fans of Hitch’s work over the course of this series, I am thoroughly enjoying it. His writing is presenting these characters in new and exciting ways (especially Batman), even if Victor does carry the team a lot of the time as a kind of Cyborg-ex-machina. One of the things I am enjoying most about this series (especially this issue) is how much it really feels like a comic book. The writing is cheesy and has its weak points, the art is consistent and encapsulating, and the Justice League are fighting a huge roster of villains in an all-out brawl. Perfect.

Overall, “Outbreak” has been an interesting story with some awesome moments, but I am glad it found the place to end without running too long. I’m excited to read the JLvSS crossover (which one of my colleagues has already written a review for here) and see what direction Hitch takes these characters in both during and after this event has ended.