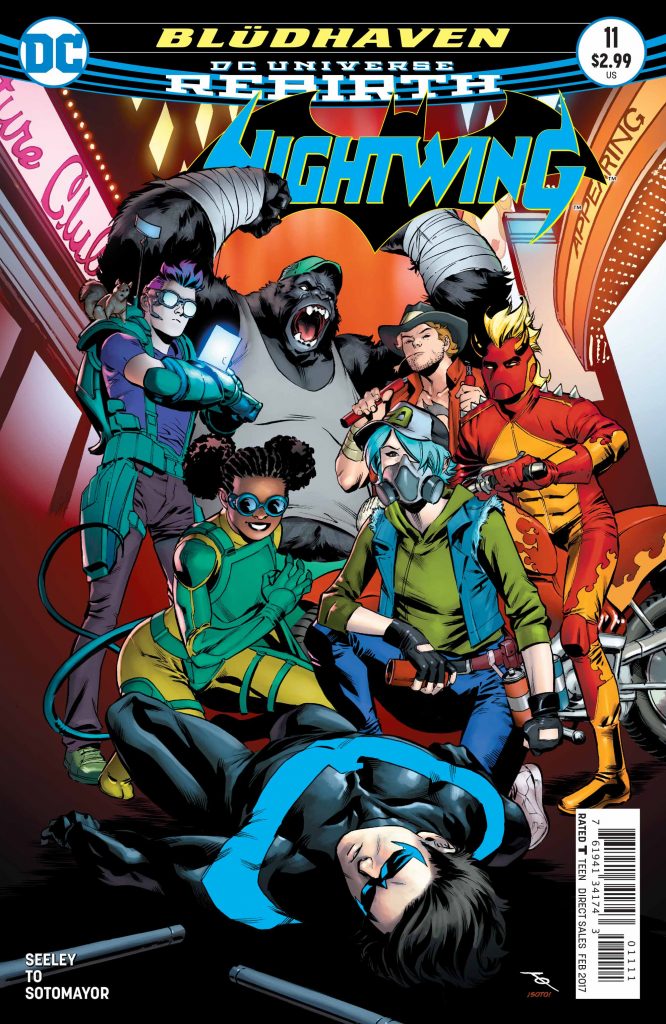 The Blüdhaven arc continues! Picking up from exactly where the last issue ended, we are greeted with a flashback of Dick back in his Robin days. It is here that we are properly introduced to The Defacer as well as her mentor, The Pigeon. While the pair of them are being placed in the back of GCPD van, Dick asks Batman what is going to happen to Defacer, stating it doesn’t seem fair that she is getting arrested. There is an interesting plot thread that is introduced here and pays off later, so I will get to that as the review goes on. I complained in my last review that we didn’t know who The Defacer was, so the reveal had less impact than Seeley probably intended, but these two opening pages satisfy that enough for me. We didn’t need a full-blown backstory, just a short introduction, and this was perfect.

Jumping back to the present day, we see Nightwing confronting Shawn in her Defacer get-up before Stallion comes barging in and takes down Nightwing. Following this, Jimmy Nice appears accompanied by Mouse, Thrill Devil and Giz and states that they are all there as part of a support group for former super-criminals from Gotham. I knew that Jimmy had an agenda, but I never would have guessed it was this. This is a nice little nod back to the history of Nightwing, as all four of these villains (Defacer and Jimmy excluded of course) made their debut during Chuck Dixon’s Nightwing series back in the mid-late 90s. Even The Pigeon has appeared before (bonus points if you can tell me where), but that was something I admit to having searched the web for. I think the idea of having a former-villain support group is a great idea on Seeley’s part, as it does two important things: it shows that anyone, no matter how evil, is redeemable in some way, and this point directly parallels the exact reason Nightwing came back to Blüdhaven in the first place. Layering. 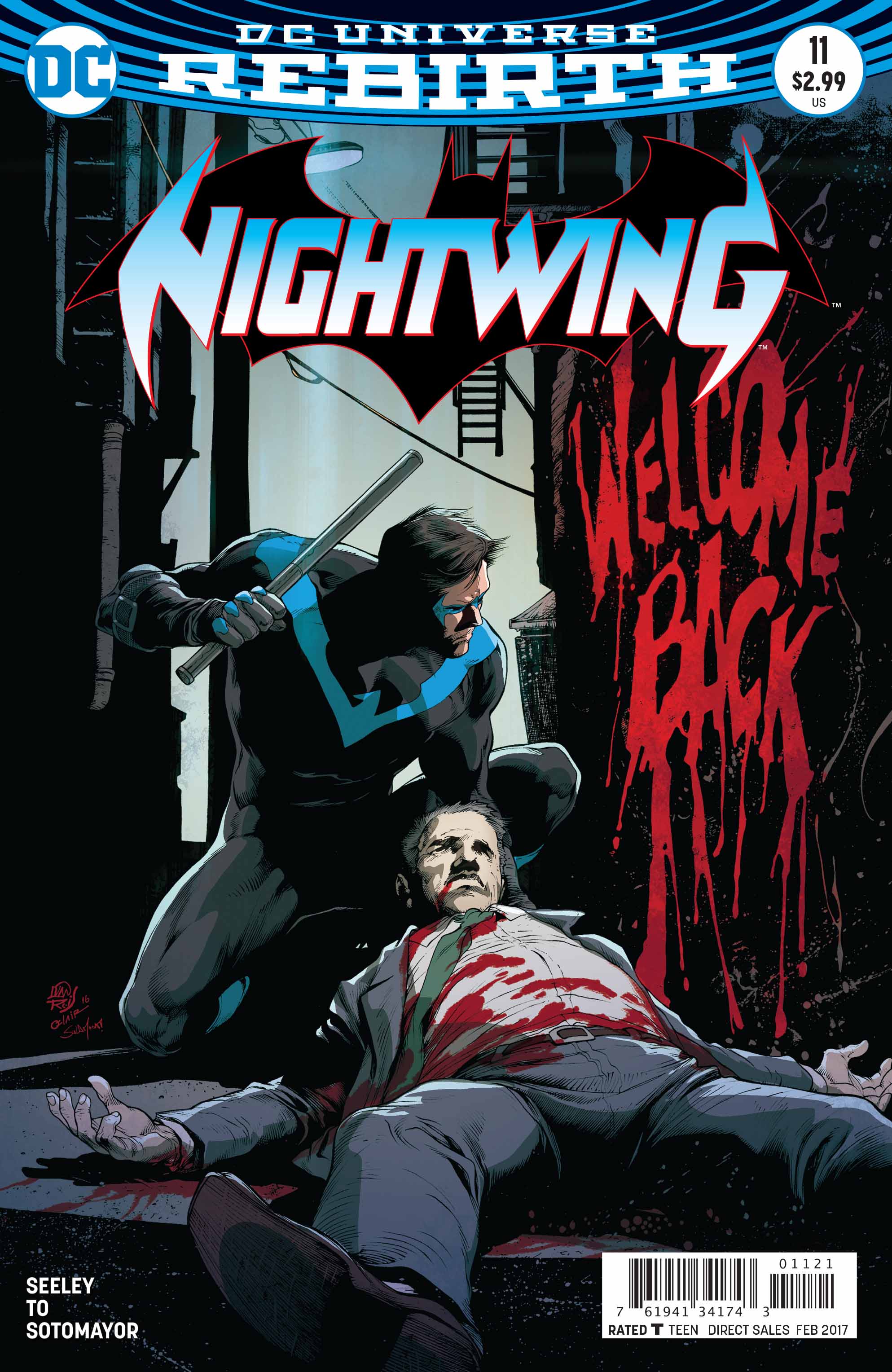 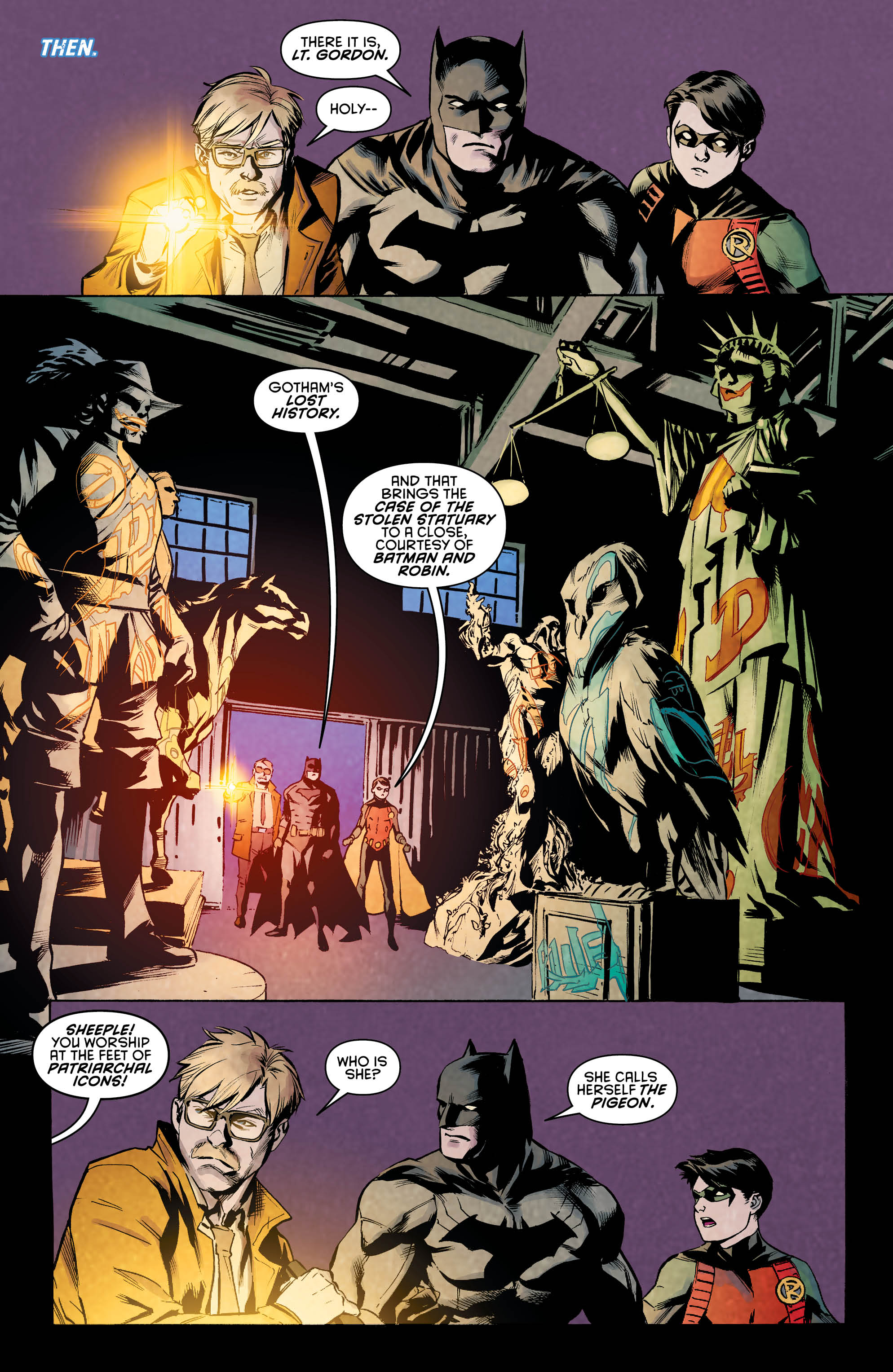 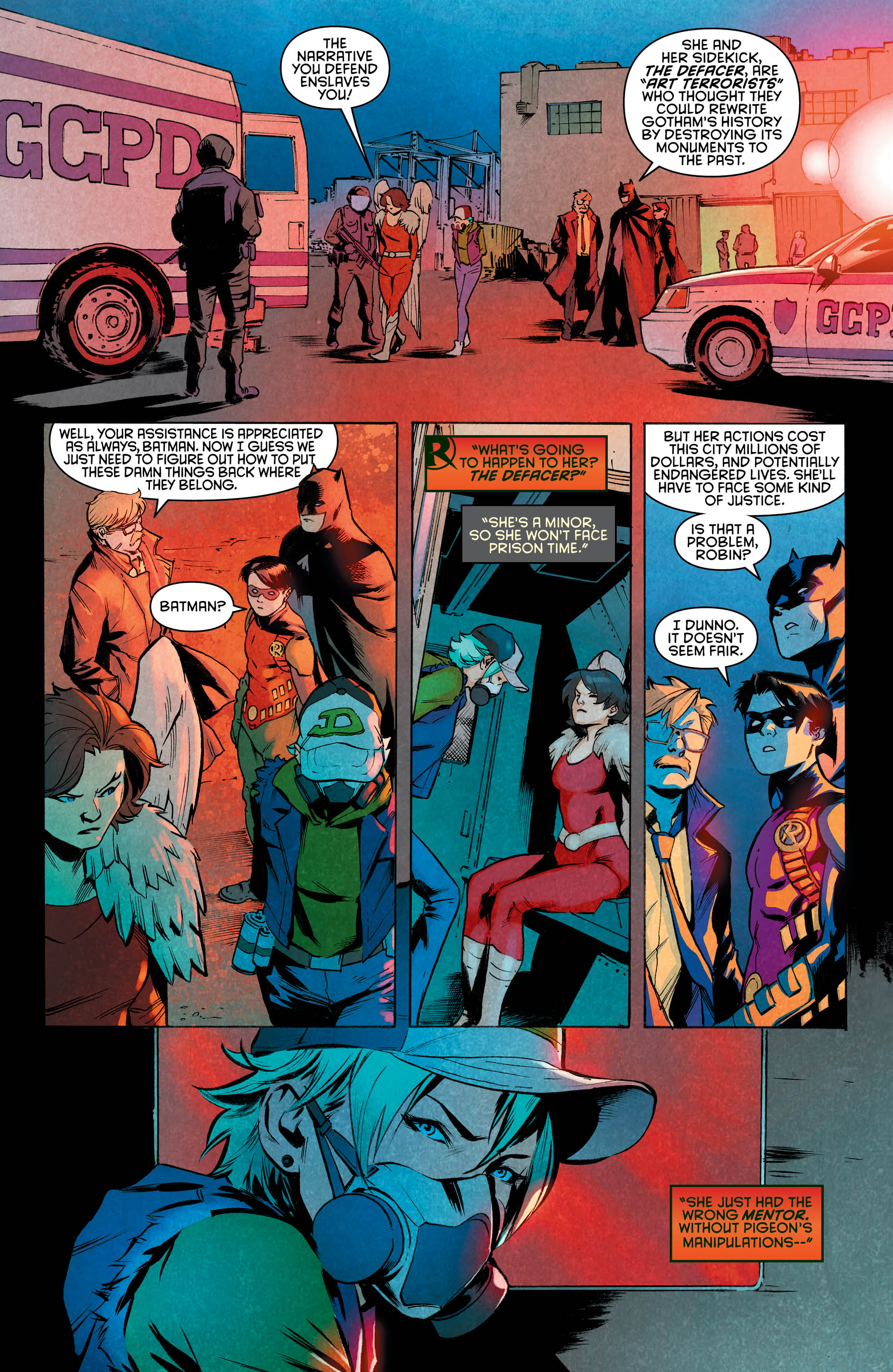 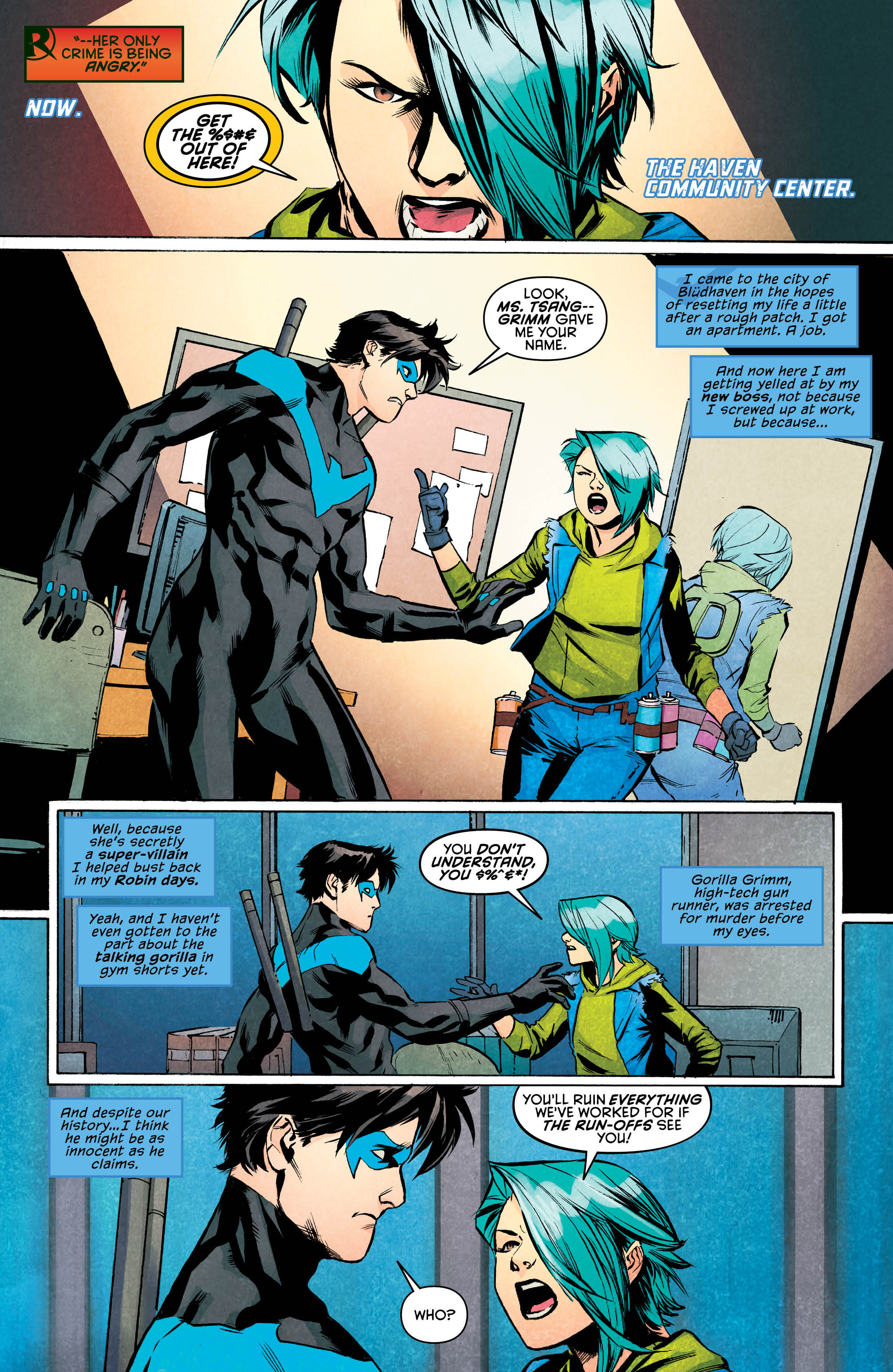 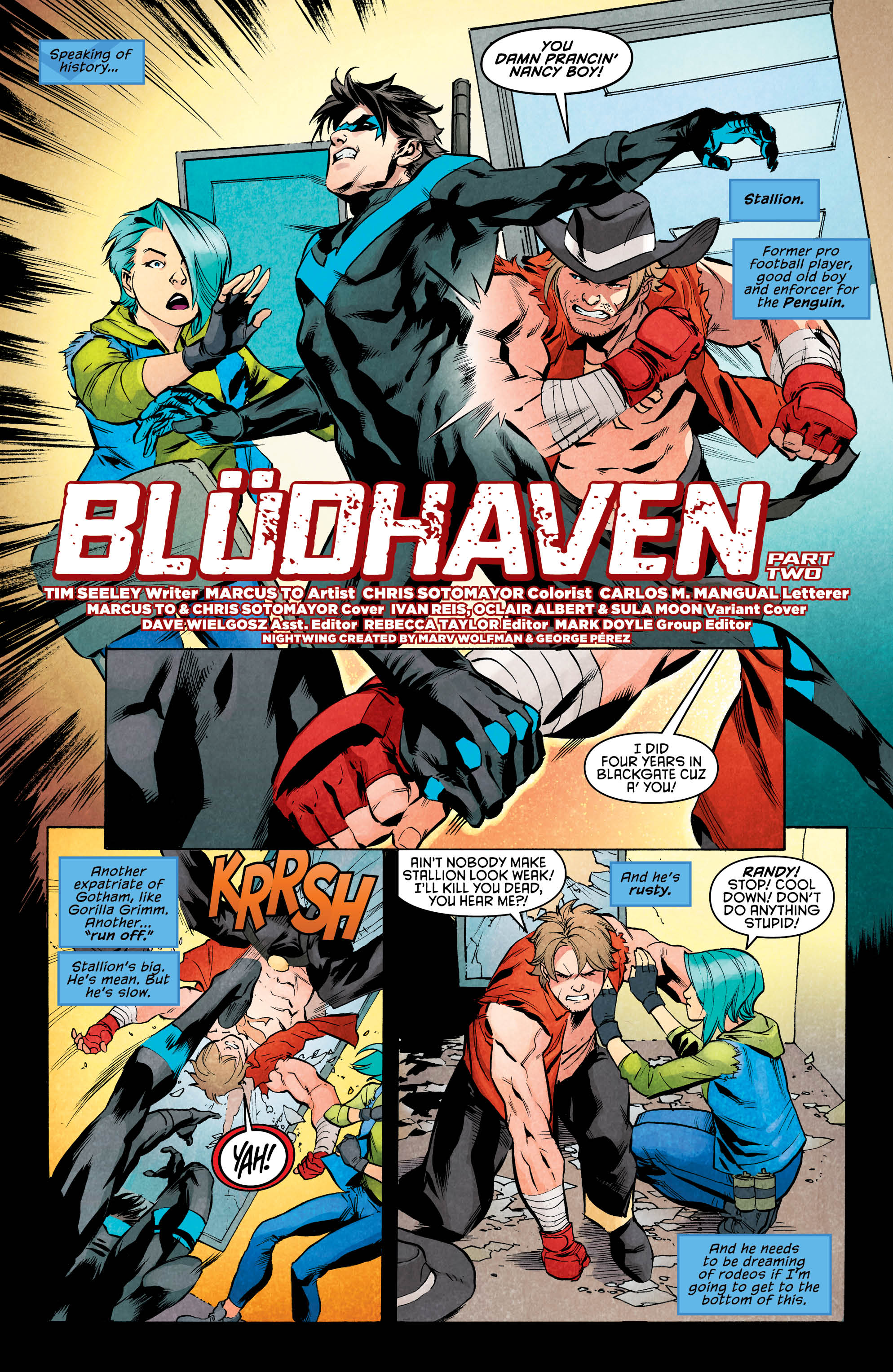 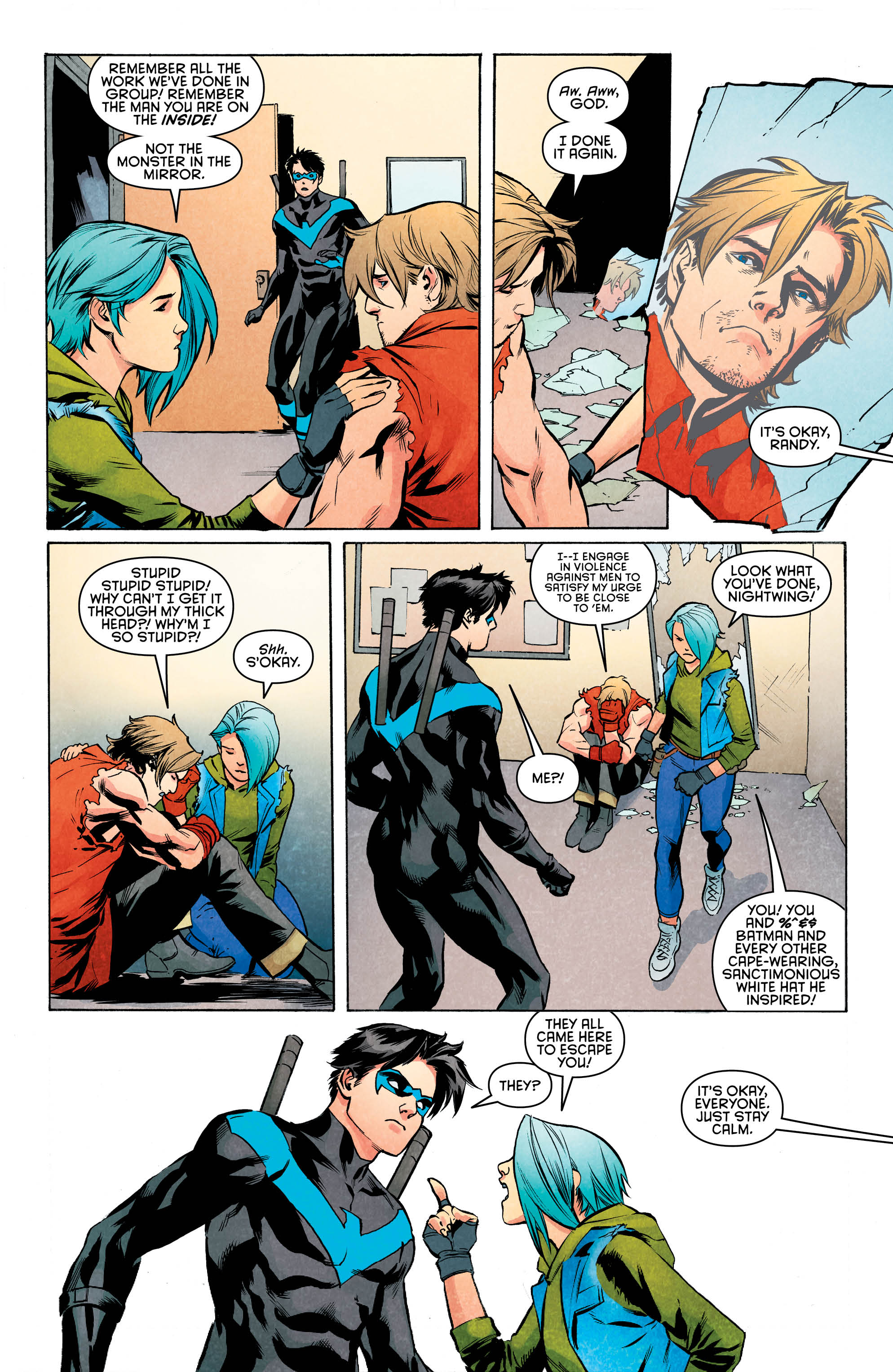 The rest of the issues plays out like an actual detective comic; there is very little dialogue and most of the narrative is driven by Dick’s inner monologue. He is helping the support group search for clues about Gorilla Grimm’s incarceration, as they believe (correctly) that he has been framed. Much like last issue, there is hardly anything to fault here. The writing is fantastic and really shows the ‘Batman’ side of Nightwing, which is ironic considering the first arc was titled “Better Than Batman.” Above the quality of the writing and the amazingly consistent art by Marcus To, the one thing that stood out more than anything was how fun this issue was. It wasn’t bogged down by any unnecessary plot threads, and everything just came together in a way that was really satisfying.

Earlier I mentioned a plot thread that got paid off later between Dick and Shawn; while Defacer is being put in the back of a van during the beginning flashback, Dick states “she just had the wrong mentor. Without Pigeon’s manipulations, her only crime is being angry.” While this line was really effective on its own (as well a nice tie-in to the support group), it gets paid off in the final pages of the issue. Shawn and Dick are having a moment and share a thought: what if they had met under normal circumstances? What if they weren’t sidekicks? What if it was just them? Not only does that tie together the themes of what this arc (and series) have been about so far, but also brings to light the fact that Shawn was a victim of circumstance. She almost represents what Dick could’ve been had Batman not been his mentor, in a not too dissimilar way to Raptor in the previous arc. Overall, I am loving what this issue brought to the series and am excited to see how this arc progresses as the Blüdhaven story draws near its conclusion.