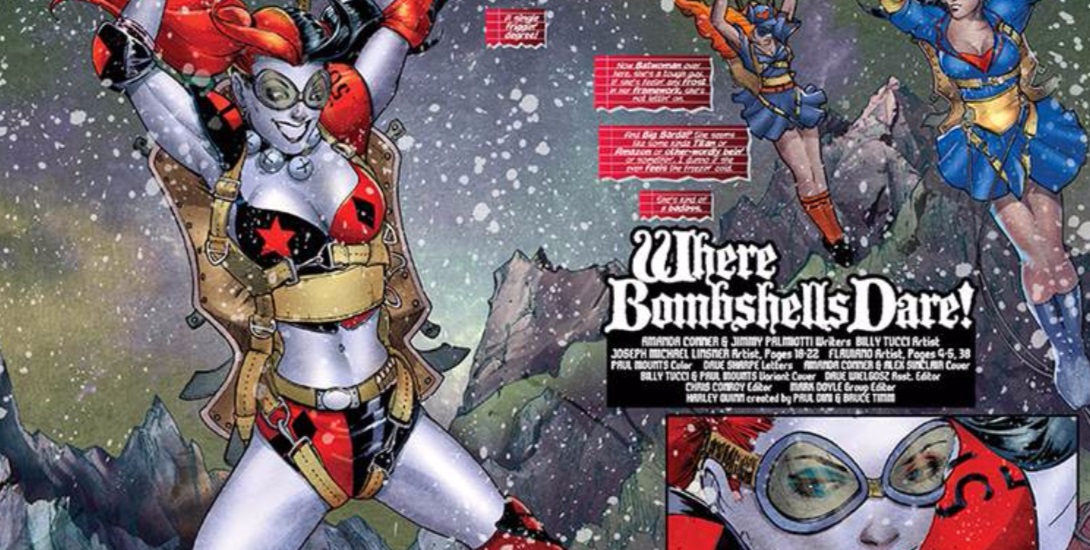 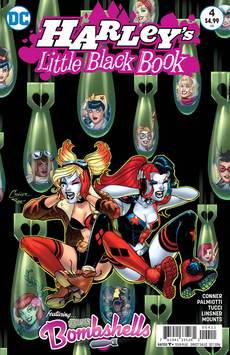 While multiversal crossovers are nothing new at DC, the universe that is the focus of main continuity has yet to interact with that of the one Bombshells stories inhabit to my knowledge. But, anything zany – no matter how absurd it may seem on paper – somehow always manages to work in the current crop of Harley Quinn comics thanks to the sharp creative minds of Amanda Conner and Jimmy Palmiotti.

As you probably surmised from the cover art, the team-up in this issue of Little Black Book involves regular Harley and Bombshells Harley. Well, they technically don’t team up as much as I would say they interact – but they do have good chemistry! There’s even some Harley on Harley for all you slash fiction fans out there.

To give you somewhat of an idea as to how all this came about, Harley gains the ability to time travel after grabbing Superman’s balls – his magic balls, that is (I’m going to continue waving meat in front of your face as to make sure you read the book). Her marble swiping, however, apparently doesn’t technically take place until the next issue, so I’m interested to see how that plays out (holy temporal anomaliolees!).

This results in her embarking on a mission with the Bombshells with the intent of rescuing a captured general deep behind Nazi lines. We even see Harley go off on Hitler as only she can.

Three artists with varying styles contributed to this issue, but at least the transitions between them occurred smoothly and everything looks amazing. Usually when more than two artists work on a Harley book, there’s a dream sequence of some sort and we do get that here when she battles Count Jokula in a dream. Let me just say that this story would have never existed without the development her character has gone through in the past few years. And am I the only one who thinks Jokula kind of looks like Bill Hader as Stefon, only with perma-white skin?

Comedy aside, Harley’s Little Black Book #4 is actually a pretty good World War II espionage thriller. Like the previous three issues, it’s a pretty dense read and feels like you have a short graphic novel in your hands. But at least it seems as though anyone can pick it up and enjoy it. I had confidence going in, but I didn’t know that I would enjoy it as much as I did.