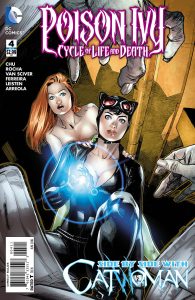 Before I get to the meat of this review, I want to say this is a crucial issue for several reasons. Not only does it put us in the second half of Amy Chu’s mini-series, but also because I have read sales for this issue are key to determining whether or not Poison Ivy has a future in an ongoing series. If you love Ivy, now is the time to get your friends on board.

A particular strong suit of this book has been the artwork contributed by Clay Mann, who unfortunately is absent this month aside from providing the cover art. I hope it’s just to give him some lead-in time for the final two issues. No less than three pencilers contributed to this issue. I mean, they all did a fine job, but three is a bit much. The transitions weren’t really jarring, although there are some inconsistencies such as one artist, whom I believe was Ethan Van Sciver, drew Ivy with flowers in her hair and the other two didn’t. I was highly surprised to see Van Sciver on this issue considering that he was pulled off Green Lantern Corps: Edge of Oblivion to work on DC Universe: Rebirth #1 and other Post-Rebirth Green Lantern titles. Flowers or no flowers, he was my favorite artist on this issue. But I digress.

One of my favorite characters, Catwoman, joins the fun for the entirety of this issue.  I feel that we see Harley Quinn and Ivy together so often that it’s easy to forget that Ivy and Selina play well off each other when it’s done right – and Chu does it right.

Selina helps Ivy infiltrate an old Gotham Botanical Gardens building as they get to the root of the problem. Darshan. Ivy’s sort of love interest, is welcomed to the fold and is put to good use. I still don’t like the character, but he finally doesn’t feel as superfluous as he did in the months prior.

Should you elect to pick this up, you will be treated to an exciting caper-style adventure that makes for a real page turner. The conspiracy is starting to unravel as our anti-hero inches much closer to the truth. There is a bit off payoff, but I do not intend to spoil your read.

I believe this to be the best issue since the first and will state that the remaining two need to maintain this level of quality if there is to be hope for an ongoing series.