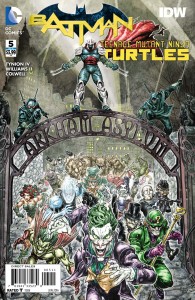 The crossover event that you should all be reading reaches its penultimate chapter this week. Much like the previous four issues, James Tynion IV scripts a veritable home run. And how many times do I have to say Freddie Williams II’s artwork is perfect? Iconic shot after iconic shot awaits.

This issue opens with so simple a notion, yet so cool: Batman along with Leonardo and Raphael answering the Batsignal! Savor every moment because who knows when something like this will happen again.

Gordon informs them that the Foot Clan has taken over Arkham Asylum, which can’t mean anything good. Just don’t expect a rush to the finish line because this issue slows things down in a sense, yet never feels like a drag. Tynion allows us to take in these characters a bit more as the race against time intensifies when the Turtles begin to feel the effects of the mutagen wearing off. I know what I said about the pace of the book might seem somewhat contradictory, but you will understand once you read it for yourself.

Another thing that I really loved about this issue was that Robin/Damian Wayne finally shows up. It was amusing to see him go toe-to-toe with Donatello, Michelangelo, and Casey Jones. At least he held his own quite well.

I’m highly indifferent to what was displayed on the final page, but I admit that it does make sense within the context of this crossover. This chapter kind of felt like the calm before the storm, so I’m expecting all-out war in next month’s conclusion.