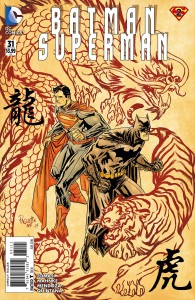 Peter J. Tomasi’s “Super League” crossover, I mean, “Final Days of Superman” continues this week in the pages of Batman/Superman and shows no signs of slowing down. I know we’re essentially only two chapters in, but I like the fact that they have both captured my interest and don’t feel trivial in the slightest. Have you ever read a crossover and thought, “I could have skipped issue X and issue Y”? Early impressions are this isn’t of that variety.

Doug Mahnke handles takes the pencils as he guides Superman to Gotham City. The scenes he renders play well to both Batman and Superman’s motifs, though mostly Batman since this issue is on his home court. Mahnke captures the darkness of Gotham splendidly and demonstrates the power of Superman in dynamic fashion. It’s a treat for the eyes from start to finish.

You’re probably wondering why Superman decided to visit his brooding pal. If you guessed it was to to look for help in curing his terminal affliction, you’re wrong. It turns out Clark has accepted his impending demise, which is starting to noticeably affect him physically. Those green irises sure don’t mean that he’s Tom Welling!

Supes seeks the help of Bats to track down his cousin, Supergirl, for he wants her to look after the planet when he breathes his last. The beats between the two made me smile, remembering the Jeph Loeb days of Superman/Batman. There are several subtle emotional moments to pick up on – Alfred sure did – and I think it is rather saddening to see Batman slowly lose his best friend and there’s nothing he can do about it.

The mystery man from the previous chapter puts in another appearance. It seems his powers come and go. When they fade, he’s a jerk. When they’re on, he’s righteous. Let’s keep an eye on him.

There is a scene involving strange Chinese Zodiac monsters that, at first, I thought was rather pointless other than to provide some great looking action scenes. The more I think about it, the more I suspect it has something to do with The New Super-Man of Shanghai, along with the above mentioned scene.

I will again advise you not to skip this issue. Come for the status quo altering crossover and stay for Batman if you must. Be sure to come back next week when the story continues in Action Comics #51.

Review: Harley Quinn and Her Gang of Harleys #1