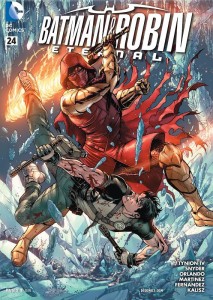 The battle continues in Batman & Robin Eternal #24 on a global scale. We get a small look at the worldwide battle going on in this story, where Mother has triggered Icthys and sent children all over into a state of evil. Blended in with this story is Mother doing all she can to convert Harper to her side, just as Dick comes face to face with Azrael.

Another solid issue this week for this story that’s been building for 24 weeks. The groundwork has been laid and is growing into an action-packed finale. My first reaction to the issue came after I saw the cover, expecting this to be a showdown between Dick and Azrael. Luckily, since I’m not a fan of Azrael, it wasn’t. However, this could have turned me away from the issue just from the cover. Good thing I’m already invested in the story.

Anyways, the supporting cast is brief this week, but Spoiler gets a cool moment of taking on one of these mini-Orphans. Everyone else is part of a massive two-page spread, but only get one small panel. I’d be disappointed, except Harper and Mother’s relationship is key for this issue to work so there’s a reason they are in most of these panels. Writer Steve Orlando lays out a nice buildup ending with another good cliffhanger.

The art this week is a tag team effort, coming from Raúl Fernández and Alvaro Martinez. As expected, it all looks good and lives up to the expectations we all have for the Eternal book.

Overall, a decent issue that isn’t as great as it should be, since we are just a few weeks out from the epic ending we have been building towards. Luckily, we have two more issues that should be top-notch.

Review: Gotham S2E14 “This Ball of Mud and Meanness”