Zack Snyder, Henry Cavill, and Batfleck Talk ‘Batman v Superman’ Feedback and How Batman Made it into the Movie

Batman v Superman: Dawn of Justice is only 2 weeks away. As a result, filmmakers and cast are making their press rounds giving tons of interviews that it’s a wonder if they’re just repeating everything. Regardless, the LA Times snagged an interview with director Zack Snyder, Henry Cavill, and Batfleck. There’s a bit of playful banter in there, which just indicates that they bonded pretty well during production. That’s pretty cool. 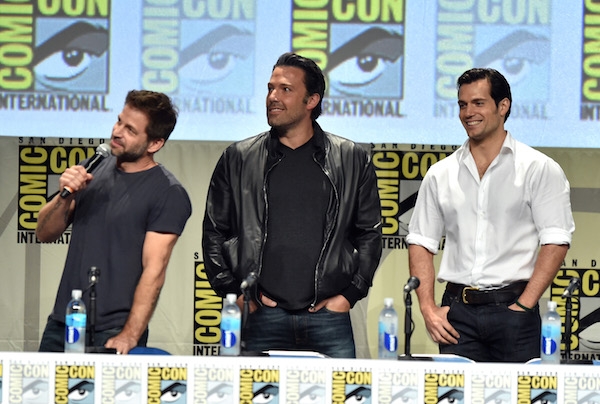 Fans have been picking apart everything about this movie since it was announced. I have to say, it’s been annoying, but with characters as beloved as this, it makes sense. Snyder, however, took it all in stride saying:

“The tweets, comments, articles, blogs — it’s insanity. I tune it out to the extent that, when it’s really dumb, then we go, ‘OK, someone stomp this [rumor] because it’s stupid.’ But mostly I just go, ‘Thank God they’re talking about the movie.’ The fact that they care enough to get online and either rage or praise — that’s just cool for the culture, for the fans.”

Considering the pressure by the fans, it’s great that he had a pretty positive outlook on it that did not deter his overall vision of the movie.

When asked about how Batman eventually ended in the same live-action movie as Supes, Snyder explains that it pretty much came from a desire to expand the DC live-action cinematic universe.

“It was born from a conversation about what to do with Superman, what to face Superman off against next. I was also really interested in expanding the comic book universe. I think Chris [Nolan] did an amazing job with those three Batman movies he did, but to me those worlds are very self-contained. If Green Lantern came into the Dark Knight movies, you’d be like, ‘That’s weird.’ I really wanted the i world to be a world where other DC characters could exist. So I was talking to Chris and I said, almost off the cuff, ‘What if Batman was the bad guy?’ And once you say that, you can’t take it back. I mean, who’s a better guy to fight than Batman?”

I like that writing decisions are made by simply saying, “you can’t take it back.”

Although it’s likely going to be taken out of context as literal, Affleck mentioned that the conflict between Supes and Bats takes its time to develop. Batfleck mentions an hour, however, it could be just an estimate, or an example to explain that their conflict is carefully paced, rather than to just throw them into the arena together.

Of course, Batfleck was eventually asked about the backlash by the Internet when his casting was first announced. Apparently, WB warned him ahead of time.

“Yeah, I wasn’t totally up to speed with the extent to which the Internet can react to this stuff, and Warner Bros. was like, ‘Look, we just want to give you a little heads-up.’ And they kind of briefed me on the reactions to some past casting choices: negative reactions to Heath [Ledger] being cast as Joker and other past stuff I wasn’t even aware of. In my experience, the truth is, if your work is good, people are going to like it. If it’s bad, people won’t. The rest of it is just speculation. It’s like when a team drafts a player: Fans can speculate, but you’ve got to wait until the season starts to see how they play.”

If you must know, his feelings weren’t hurt. He’s a big boy, after all.

To close this article, I’m going to blockquote something that Batfleck said that shows just how invested they are in this movie. It’s almost like a candid response based on exasperation and I like it.

“Zack spent two years of his life on this movie, and we put in months and months. We are truly, deeply invested in this movie. We want the movie to be good. We want to be proud of it. I want to make a movie that my kids think is cool. It’s not just us punching the corporate clock. You know, you get up at 5 and go to work at 6 in the morning and put on the suit. It’s not particularly fun and sexy to roll around in a rubber suit fighting a stunt guy.”

Read the rest of the interview here.

Batman v Superman: Dawn of Justice is out March 25th.