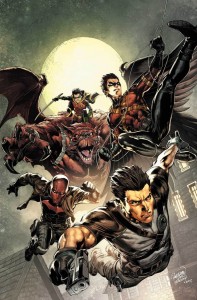 A pep talk is what we get for most of this week’s issue of Batman & Robin Eternal. Our four Robins (Dick, Jason, Tim and Damian) are at the Spyral headquarters following the flipped switch that set off a ton of mini-assassins a few issues ago. The topic at hand? Mother, of course. The team has sort of hit rock bottom. Harper and Cass have been taken, the plane they’re on is nowhere to be found, a number of people are dead, and Mother is in her lair ready to pull the trigger on the plan years in the making. Speaking of Mother, the issue is bookended with her in her element, taking control of her satellite weapons. Blood is shed (sorry Orphan) and new soldiers are introduced (mini-Orphans?). In the end, we are left with momentum leading into next week’s (hopefully) exciting issue.

There’s a lot of talking in issue #22, but that’s okay. This is GOOD dialogue. Mother has turned into an interesting, threatening villain. Her talks to her children toward the beginning was really direct and blunt (as always), which is always the sign of a good villain. This of course ends the issue as well, with her giving a big speech to Harper and Cass right after slitting Orphan’s throat.

While all of this is good, the meat of the issue comes in between. The four Robins are deep into thinking on their situation, and writer Genevieve Valentine really nails each character. The curve ball came, from all people, Damian! We got a nice little flashback to his training days with Batman. The kid is being his usual self (a prick, whiny, jealous) but is calmed down when Batman compliments each of the former Robins, while also revealing how he wants Damian to find his way. Good stuff!

Fernando Blanco follows the Eternal ways and knocks the art out of the park. On a few pages, I thought Dick and Jason were starting to look like twins, but there were some minor difference. The issue was a bit dark which matched the tone, and situation, of our heroes. Hey, the night is darkest just before the dawn.

Overall, another solid entry in the title as we inch closer to the finish line. There are four issues left and next week’s should be the beginning of the end.