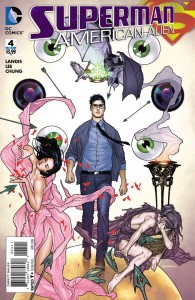 The fourth installment of Superman: American Alien sees Clark Kent finally arrive in Metropolis. Now, he isn’t an employee of the Daily Planet as of yet, but rather, a student of journalism. While he has yet to put on the tights, this is a key issue, for he meets several important characters that I will discuss in a moment.

Speaking of Metropolis, its vibrant skyline is brought to life by Jae Lee, who put forth a solid effort, although I admit that his artwork isn’t always for me. Still, this is one of the best outings I’ve seen from him and I really enjoyed some of the layouts he created.

The first of several important characters that Clark meets in this issue is that of Lois Lane. Their legendary relationship gets off to a pleasing start in this continuity, as they begin to plant the seeds of the Dynamic Duo that they will one day become.

In the midst of all this, Clark once again runs into Oliver Queen, who now has that whole island thing behind him and is a changed man. It was pretty funny when Oliver called Clark “Bruce,” which was a hilarious callback to the previous issue. Most important are the powerful words of wisdom the future Green Arrow (I’m assuming Ollie hasn’t put on the costume yet) gives tomorrow’s Man of Tomorrow.

Personally, I think the most important first encounter in this issue is the one with Lex Luthor. To be quite honest, I tend to be protective of Lex, who is one of my favorite villains. Thankfully, Max Landis perfectly captures his intellectualism, world view, and silver tongue. I was truthfully tempted to use Lex’s quotes as Facebook statuses, but ultimately decided against it so I can fool people into thinking I’m nothing like him.

There’s more Bat involvement as Clark has an interesting meeting with a young Dick Grayson, the latest case of meddling that finally causes The Batman himself to pay the Boy Scout a visit. As usual, Landis puts a welcome new spin on things that still has me holding out hope that he will followup this mini-series with a Batman one.

Although it may be a bit early to assume this, I gathered from all that I took in that the events and encounters in this issue were the final ingredients in the cocktail creating this version of Superman. It was a remarkable read that I want every one of my readers and Superman-loving friends to experience.

And while I just said it’s early in the game, I’m going to make a bold statement after only four issues have shipped: this is the best limited run to feature the Man of Steel since All-Star Superman.