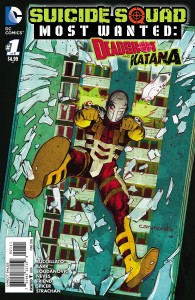 With the Suicide Squad movie set to arrive in theaters later this year, DC has wisely decided to release more titles featuring Task Force X’s deadliest assets. Sure, many moviegoers will walk in knowing The Joker and Harley Quinn, but what of those other characters?

Suicide Squad Most Wanted gives you bang for your buck and focuses on Deadshot and Katana. Both have enjoyed some mainstream success on the TV series Arrow, among other things, although it doesn’t hurt to shine some extra spotlight on two characters we don’t always hear from.

The first half of the book focuses on Deadshot and is written by Brian Buccellato with art provided by Viktor Bogdanovic, whose pencils somewhat remind me of Greg Capullo’s (I mean that as a high compliment). With Floyd Lawton being the story’s protagonist, Buccellato smartly writes him as being deadly, yet very complex; an assassin who very much resides in a “grey” area. He embarks on an exciting covert mission in which he hunts for a cartel leader with his search ultimately leading him to Gotham City (where else?). This portion takes a very personal turn at the end that will likely have many readers coming back for the second issue.

The second story revolves around Katana and is written by Mike W. Barr with art from Diogenes Neves. DC’s premier female hero with a blade takes on Kobra, a secret society that many a Batfan should be familiar with. While it does provide for an entertaining, action-packed read, it doesn’t have the depth of the Deadshot story and doesn’t feel like it accomplished as much. I will say that it is worth your time, though.

Despite the fact that I think Deadshot’s half of the book was a much stronger offering, you really can’t argue about essentially getting two comic books for a decent cover price of $4.99. With five issues remaining, it should be interesting to see where these characters will go next and help us countdown the months until the film’s release.

Two DC Titles Are Among The Latest GLAAD Award Nominees