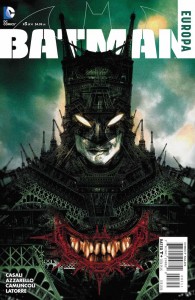 Just two weeks after a lukewarm second issue hit comic shops, the third installment of Batman: Europa arrives. I’m pleased to say that this issue gets the mini-series back on the right track.

In it, Batman and Joker find themselves in Paris, where we are treated to some interesting internal monologues from each character. Their varying viewpoints on the city also happen to offer deeper glimpses into who they are as human beings. Matteo Casali and Brian Azzarello once again perfectly capture the voices of these two iconic foes who are forced to team up to avoid succumbing to a deadly virus.

For this issue, artwork is provided by Diego Latorre, who offers what I can best describe as a hybrid of Dave McKean, Dan Brereton, and Ben Templesmith’s work. While it is quite stunning, it can at times feel like looking at stereoscopic images without the aid of 3D glasses, causing some action scenes to feel disorienting.

While Paris does serve as a great Gothic stand in for Gotham City, a good deal of the issue is spent underground as Batman and Joker embark on an atmospheric trek through the catacombs. Apparently, Joker has a devoted underground following meeting there that actually provides some assistance in their quest.

The identity of Trojan Horse has yet to be revealed, but we do get a glimpse at him. Let’s just say his appearance is… odd. With this being the penultimate issue, I thought we would’ve received a bit more in that regard, so we can only hope that next month’s finale delivers the goods.

What made this issue an improvement over the previous one is that it got back to what made the first so great: it played to its strengths and focused on character. Azzarello has a history of playing Batman and Joker off each other rather well and making it the heart of this issue made it all the better. Be sure to join us next month as our favorite characters head to Rome for the conclusion.