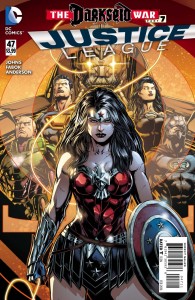 The third act of “The Darkseid War” is now in full effect and feels like the most grandiose thing Geoff Johns has written since Blackest Night. Sure, Flashpoint literally redefined the DC Universe, but this is just so broad in scope and benefits from years of setup just as Johns’ Green Lantern epic did.

As good as Francis Manapul is – and he really is the cream of the crop – I feel like saying “The King has returned” now that Jason Fabok has resumed artistic duties on this title; I really love his work that much. The detail is insane and the action scenes look as though someone freeze framed the most dynamic shots of a blockbuster movie.

This issue really gives perspective on how much Apokoliptian powers have changed our heroes, especially Batman and Superman, the latter of whom is being affected in a most detrimental way. Some of the other Leaguers attempt to free the Crime Syndicate from Belle Reve Penitentiary, but it doesn’t go according to plan – for either side.

You can probably tell that I’m trying my best to tiptoe around major spoilers, but that’s because so much cool stuff happens. Major developments, reveals, and shocking returns are aplenty in this fine read. If this captures even a tenth of what to expect from “The Darkseid War’s” third act, then we’re in for a hell of a ride.