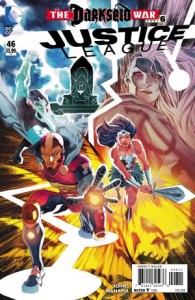 It really feels like Geoff Johns has been building to this story for years. As “The Darkseid War” closes its second act, we’re given the feeling that so many of the seeds Johns has planted are about to sprout (e.g. Crime Syndicate).

Much of this issue is narrated by Wonder Woman, which felt like a natural fit given the fact that she’s surrounded by gods, some of which happen to be her friends corrupted by immeasurable power.

While this issue is somewhat of a quick read, that doesn’t mean it’s bad. Johns rarely steers us wrong and he’s once again joined by Francis Manapul, whose art is as beautiful as ever. These two managed to craft some tremendous action scenes worthy of a big budget movie.

Although this does deserve its share of praise, I can’t help but say that it really felt like an interlude issue. After a short hiatus filled with one-shots, Justice League fans have no doubt yearned for something a bit meatier. It’s probably safe to assume the next issue will kick things into high gear as we race toward issue #50, which happens to be the conclusion of “The Darkseid War.”